With the permanent closure January 2 of Goofy's Bounce House, there's even less to enjoy at Mickey's Toontown in Disneyland.

Reducing the roster of rides is actually quite a feat considering how few worthwhile attractions Toontown had. Unlike every other Land in Disneyland, Toontown today boasts considerably fewer rides today than when it first opened. Guests are forced to walk all the way to the back corner of the park, past “it's a small world,” under the railroad tracks, and their reward is some fun architecture and a Roger Rabbit dark ride. Everything else is aimed at clientele in Pampers, and even they have a right to be disappointed with what's being aimed at them—a collection of structures left over from a McDonald's Playland, with half of them boarded up. 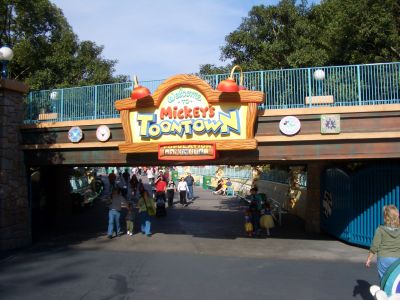 Toontown: enter at your own risk. Photo by David Koenig.

I've heard three major arguments for building this caliber of attraction at Disneyland:

1. Disneyland needs something for the 3-and-under set.

Why? They're not even paying to get in. Don't toddlers enjoy Dumbo, Storybook Land and the other 50 rides that don't have height requirements? Next are we going to build a Land solely for old people, filled with nothing but really slow, boring attractions that you're not allowed to ride unless you show proof of retirement? 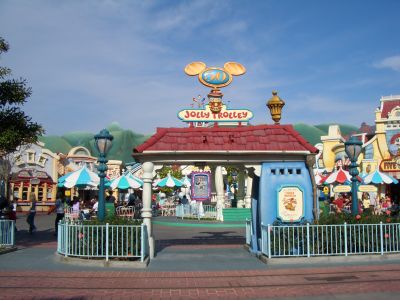 The trolley's last stop was, in fact, its last. Photo by David Koenig.

Disneyland used to have such a place; it was called Tom Sawyer Island. Kids had the run of the place—with trails, caves, bridges, an armed fort, amusements carved out of the rocks. It was an expansive playground themed as an adventure movie. Although it, too, has had much of the fun sucked out of it by the lawyers, the island still has greater appeal to an entire family. 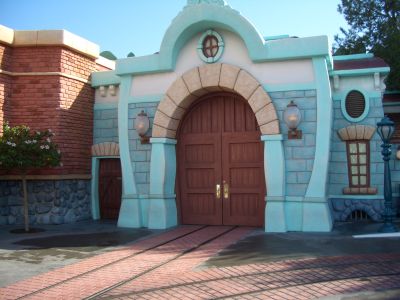 Yeah, and some kids will pass over a toy to play with the box it came in—that doesn't mean you give a kid an empty box for his birthday. Disneyland is supposed to be different—and better—than the real world. The more the Magic Kingdom looks like your local park, with two-foot-tall slides and fiberglass animals to climb on, the easier it becomes for us to hold on to that $59 and do something else. 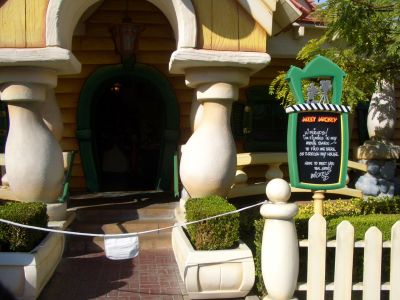 Let's tour Mickey's Ghost Town, a veritable graveyard of neutered attractions. To the right is Roger Rabbit's CarToon Spin, the one ride that would actually merit a letter in the old A through E ticket books. But turn left and you'll encounter little more than faded shells of what used to be. 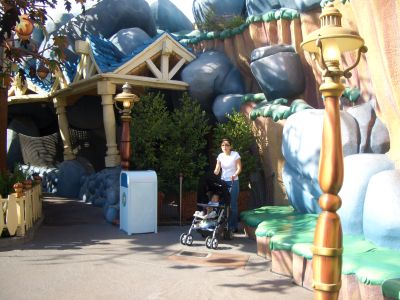 A dissatisfied tourist turns away from the former site of Chip & Dale's Acorn Crawl. Photo by David Koenig.

Dead center is the Jolley Trolley Station, a stationary reminder of what was once the main kinetic element of Toontown. Bells ringing and frames bouncing, the pair of trolleys would bridge the Land's two disparate ends, Downtown Toontown and Mickey's Neighborhood. In time, the vehicles lost their bounce and the fleet was pared back to a single trolley, before both were mothballed. 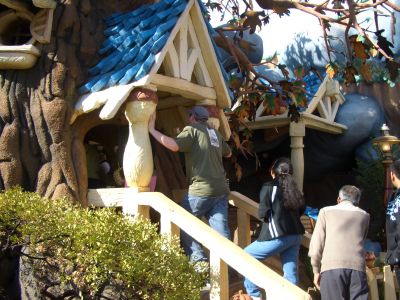 No! Turn back! It's just a trick! There's no ride here! Photo by David Koenig.

At the far end of the trolley line are Mickey's and Minnie's homes, which Disney has long since given up on pretending are anything but glorified backdrops for meet-and-greets. At least when Toontown was first created—back in the days when characters freely roamed the parks—there seemed to be a need for a place where guests could go and know they would have a chance to meet Mickey. But now that Disneyland has regular meet-and-greet stations throughout the park and hand-outs advertising where and when each character will appear (not to mention the sporadic hours Mickey and Minnie keep at their own homes), the main argument for the Open Houses seems a lot weaker. 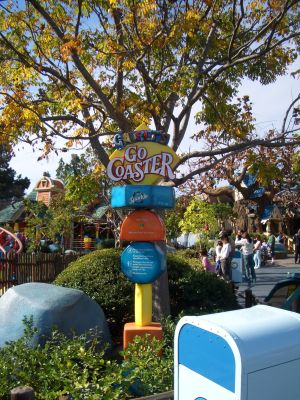 I wonder if the Go Coaster's sponsor, Sparkle, has any idea who Gadget is. Come to think of it, I have no idea who Sparkle is. Photo by David Koenig.

To the left of the mouse houses are the remains of two Chip and Dale themed attractions—the ever-popular Acorn Crawl and the ingenious Treehouse. The Crawl is a pit that used to be filled with plastic balls for toddlers to wade through. It was closed down for fear wee ones would become injured, contaminated or disappear into the unhygenic ball pile. 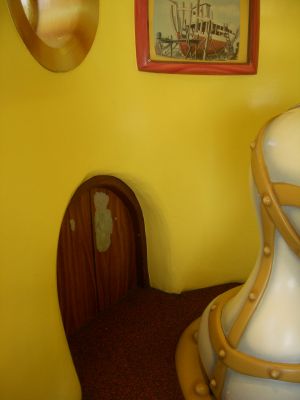 If visitors to Donald's boat don't notice the peeling paint, maybe they won't notice the slide that used to be here is missing, too. Photo by David Koenig.

The Treehouse used to feature a 20-foot-long, no-tech slide, which led to several broken limbs as parents became tangled up trying to slide down with their children. No one complained when Disney removed the slide. It's just that usually when a theme park closes a ride it is considerate enough to take down the sign and rope off the queue. With the Treehouse, they left up the sign as well as the stairs. I can only imagine it's some sort of insidious joke; maybe management has a hidden camera at the top of the Treehouse to guffaw at the wacky tourists who climb all the way up the cramped, winding staircase only to realize they've been had! There's nothing at the top except another staircase leading right back down! (In case you're wondering, there's not even a view from the top—unless you crouch and squint for a glimpse of the shuttered ball pit.) 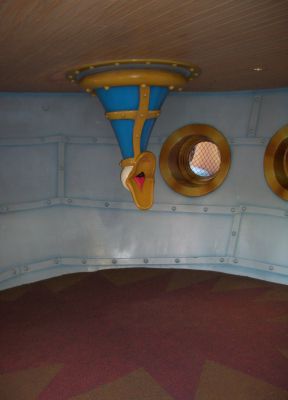 The slide used to exit into the largest open area on Donald's boat. It's now even more open. Photo by David Koenig.

Next door we find Gadget's Go-Coaster—at about 40 seconds possibly the shortest ride at Disneyland. The diminutive, off-the-shelf coaster isn't a bad ride, but it's inexcusably themed to a character whose television series was canceled in 1993—the same year the ride opened. But it's not like Gadget has been forgotten; the vast majority of Disneyland visitors never heard of her in the first place. 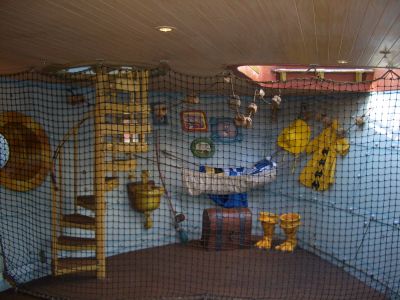 Please, no climbing on the climbing net. Photo by David Koenig.

Our next stop is what's left of Donald Duck's boat. It still looks like a boat, but it's had every single activity removed—its spiral staircase is blocked off, the fishing net you used to be able to climb is now used as a barrier, and the slide has been yanked out (actually an improvement over when they just stopped it up with a sheet of plywood). 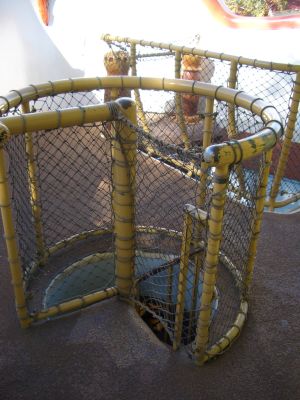 Can't have vulnerable visitors doing anything as dangerous as walking up stairs, can we? Photo by David Koenig.

Goofy's Bounce House used to come next. Granted, it wasn't much of an attraction, considering you could rent a passable facsimile from any party supplies company, but at least it was something to do. Yet, like the ball pit, it did require staffing as well as praying no one got hurt. After little kids took off their shoes, they'd receive a solemn warning of oxymoronic proportions—you can go into Goofy's house and go crazy jumping all over the furniture and climbing the walls, just be careful. 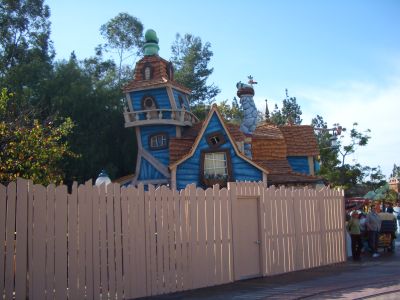 Goofy's house has had its bounce extracted. He's trading down for a playground. Photo by David Koenig.

Goofy's house and his garden are currently being gutted to make room for a rubberized playground along the lines of the imagination-less areas at Mickey's Toontown Fair and the Hundred Acre Wood in Florida's Magic Kingdom. Fortunately, Goofy's garden will be conveniently located next to Toontown Park. Here, parents will find four park benches elaborately themed as, well, park benches so they can vegetate as their children run wild, searching for something, anything to do. 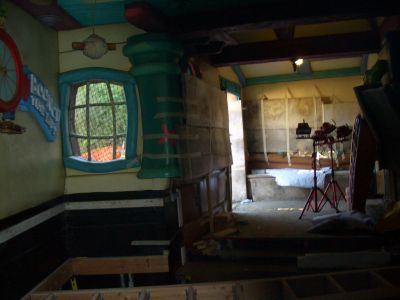 Goofy's furniture has been taken away. Maybe he should check eBay. Photo by David Koenig. 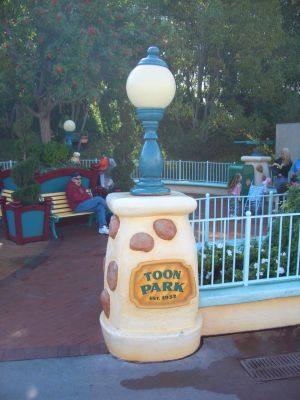 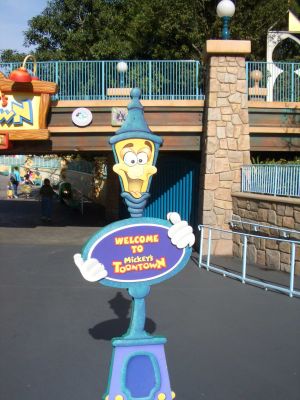 Like this plywood cutout, I was a lot happier once I got outside of Toontown. Photo by David Koenig.