Considering the rate at which pirates—and pirate merchandise—are overtaking Disneyland, it appears as if the park's marketing staff is eager to bring its phenomenally successful Golden Anniversary celebration to a close. Some of the 50th decorations have already been taken down; most of the rest of the special features should be stripped away by Halloween.

Whatever you do, make sure you get the chance to savor the historical exhibit "Disneyland: The First 50 Magical Years" at the Opera House. The antiques are interesting, and the Steve Martin movie is fun. But, best of all, is the exhibit's heart—a 12-foot-by-12-foot scale model reproduction of Disneyland on Opening Day 1955. I've seen hundreds of photos of 1955's Magic Kingdom, from every conceivable angle, but never before in three dimensions, in living color. The display is spectacular, providing a deeper sense of what the park was like years before most of us had the chance to visit. 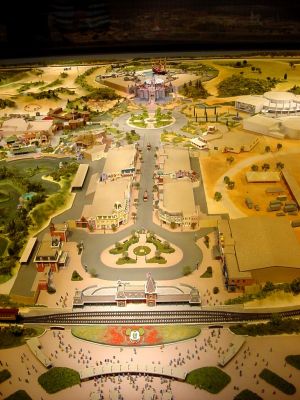 A gorgeous 144-square foot model of 1955's Disneyland is the centerpiece of the park's historical exhibit. Photo by Jeff Bray.

During my countless trips to check out the model, there would always be a small crowd huddled around the display glass, and I've overheard some wonderful conversations—how they remember this long-gone sight, how they used to love that decades-ago-demolished place. Or their wonder at how small and different and—in many ways—the same Disneyland used to be. There are also plenty of Quasi Experts who hold court with friends and relatives, regaling them with deep insight about the Disneyland That Was.

Now, as much as I adore the display, I don't suggest using it for historical purposes. The model has its share of errors. A few are biggies, but most are nit-picking for us compulsive sticklers. So, with that warning, proceed ahead to learn some really anal-retentive trivia to annoy your fellow guests.

Some elements were inexplicably forgotten, including all references to Disneyland's Native American heritage.

1. No Indian Village – On the opposite side of Frontierland's wooden footbridge from the Chicken Plantation restaurant was the first home of the friendly Indian Village. Although official park records show only that performances began some time in July 1955, the Indians and their village were there from Day One.

2. No pretend Indian Village – In the middle of the pack mule trail, directly behind where the model shows a corral, was an encampment of seven tepees and other props. In 1956, when the Mine Train moved in, the Indian settlement was re-created on a back stretch of the Rivers of America.

3. No Pack Mule trail – Originally, there were three trails through the forests and desert of Frontierland; the model shows only two. (Come to think of it, the loading corral for the mules is also missing.)

4. No mule bridges – My guess is the designers forgot to add the skinny pack mule trail because they thought the mules took the path that ran directly around it (this actually was the wider Conestoga Wagon route). But if they intended it to be for the mules, they should have built wooden bridges over the two points where it crosses over a stream. The mules went over, the wagons through the water.

5. No squid building – Although you can't tell from the display, the primary differentiating factor between the two circular buildings in Tomorrowland was that the one containing the 20,000 Leagues under the Sea exhibit had a fair-sized shed built on the back that housed the squid and its machinery.

6. No spur track for Casey Jr – Until spring of 1956, when it was moved offstage behind the ride, Casey Jr.'s auxiliary track extended past where the Skyway station would be built. (It was lengthened and moved alongside a boat storage area for Storybook Land.) Wherever that invisible spur track is, the second Casey Jr. train is probably sitting on top of it. 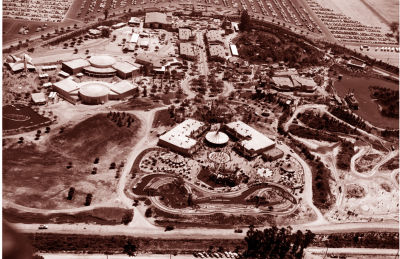 The Disneyland that was—during its first summer in 1955.

7. No souvenir kiosks – For years, Disneyland had four round merchandise stands—two before you head through each tunnel under the railroad and two in Town Square after you exit the tunnels.

8. No trees in the forecourt – Pre-opening, the park planted two young trees in round holes in the pavement in the entry courtyard. Today, there are more ornate brick planters, but the tree on the left's still an original.

A few things are shown that shouldn't be.

9. Spur track on the wrong side – Unlike Frontierland's (which the model has correct), the Main Street Railroad Station's track should angle more away from the station, rather than inward, closer to the station.

10. Umbrellas behind the gazebo – In what would become Carnation Gardens, the display places some of the umbrella-topped benches behind the gazebo in. But Disney put the structure in this spot to be used not as a gazebo, but as a bandstand for the Disneyland Band and other musical groups. So it was placed at the far back, behind all umbrellas and benches. 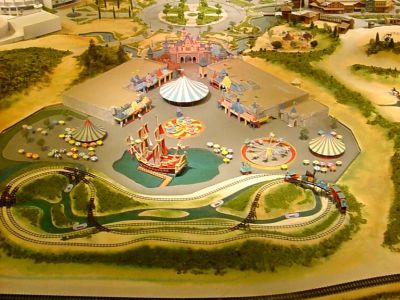 11. Streetlamp on Matterhorn Way – The pathway that would become Matterhorn Way started as a construction road that vehicles traversed to haul dirt excavated from the castle moat. Although most of the pathway was considered off-stage in the summer of 1955, the section closest to the hub was paved for aesthetic purposes. There was, however, no lamppost along the walkway.

In some cases the count is off.

12. Too many boats – When the Jungle River Ride opened, it had only seven boats. The model shows nine.

14. Phantom Boats – The Tomorrowland Boats were turquoise and pink, not black, silver and gold.

15. Miscolored plate – Although it was later painted a swirling red and yellow, when Disneyland opened the master "saucer" for the Mad Tea Party was drab gray. 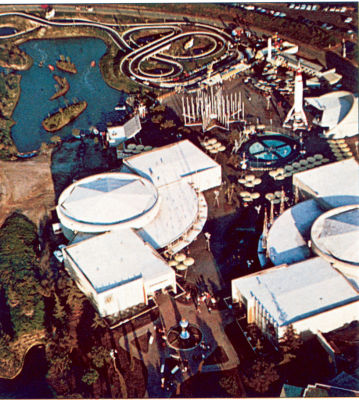 Tomorrowland's main buildings were mirror images of each other, making it all too easy for the new model's assembly team to mix them up.

Some errors were undoubtedly the fault of those who assembled the model, rather than those who designed it (and, in the year since it's been on display, should have been easy to correct).

16. Wagons are backwards – The miniature vehicles are pointing clockwise, when they actually used to travel counter-clockwise.

17. All wagons on the same trail – The little plastic covered wagons were mistakenly placed on the same path as the stagecoaches. Although the vehicles were forced to share the same route after the Mine Train came to town, in 1955 the Conestoga wagons ran on a shorter trail inside the stagecoach path.

18. Tomorrowland buildings flipped – The two main buildings in Tomorrowland were designed as mirror images of each other, which made it all too easy for the assembly crew to mix them up. In the model, the 20,000 Leagues under the Sea building was erroneously placed on the left, with the Hall of Chemistry facing the Autopia. The Space Station X-1 building was put on the right, with what would become the Art Corner facing Main Street. (This side of the buildings wasn't didn't have multi-colored panels across the face in 1955; the decorations came with the opening of the Art Corner and Dutch Boy Color Gallery in 1956.)

19. Misplaced portable building – Behind Main Street was a long string of portable buildings left over from construction that were used as makeshift offices for lowly managers, such as the head electrician. At the far end of this "Tijuana Row" was a larger portable building, parallel and just off to the side. The model erroneously depicts this building as a tent positioned perpendicular to the row the shacks. (The tent is also proportionately too long.)

Some of the things missing were likely intentional, to save time or to eliminate distractions.

20. No Autopia garage – It might seem inconsequential, but the garage where workmen patched up the first Autopia cars actually became a significant structure in park history. In 1956, the first Tomorrow-land Skyway station was built on its roof. The model makers put a tree there instead.

21. Selective dock construction – They built the dock for the Tomorrow-land Boats, so why not for the Canal Boats of the World? (F.Y.I. That first dock was about where Monstro the Whale would be built when the ride became Storybook Land in 1956.) There's also no loading platform for the Casey Jr. Circus Train.

22. Missing fencing – The model includes quite a few barricades and partitions, but in truth there were many more, including a fence around in front of the Canal Boats and an aluminum fence in front of the Tomorrowland Lake.

23. No "chemistry" poles – On Opening Day, Tomorrowland was dotted with not just clusters of white plywood awnings, called "Shade Circles," but also about a dozen groupings of 20-foot-tall aluminum poles with flat circles on the ends and balls attached, like giant chemistry diagrams. 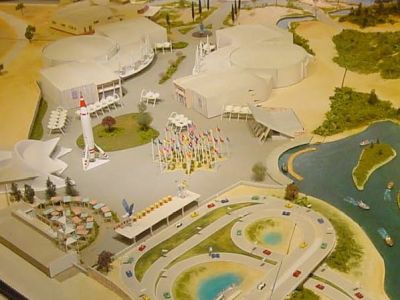 Color bind: I'm just guessing that the state flags represented in the star-shaped Court of Honor weren't quite as rainbow-colored in real life. Photo by Jeff Bray.

24. Missing pennants – Although they may have been too small to reproduce in miniature, there were little multi-colored flags draped from pole to pole on top of the entrance to the 20,000 Leagues and Space Station X-1 buildings. (The model does show the naked poles.)

25. Only two backstage houses – The model shows two ranch houses behind Main Street (the one on the right was the first Administration Building). Actually, there were two more relocated ranch houses in the row, closer to the Opera House.

26. Not enough Matterhorn trees – The model shows eight trees randomly placed on "Lookout Mountain," the pile of dirt that later became the site of the Matterhorn. Actually, there were about two dozen trees, which were planted in much neater rows. The idea was to make the dirt heap look like it was supposed to belong there.

27. Overly painted desert – The back third of the stagecoach route was supposed to simulate a trip through the desert, with the scenery intentionally sparse. There were three mounds of dirt with minimal vegetation and more than two dozen spindly cactus positioned on both sides of the path. The model only has a half-dozen or so cactus and its dirt piles are uncharacteristically lush (designers took similar artistic license coloring the banks of the Canal Boats). 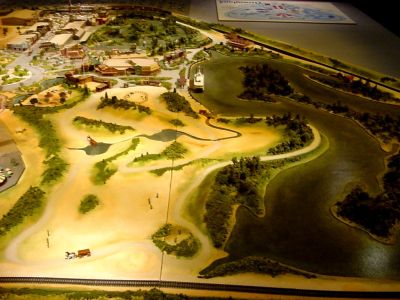 Can you figure out which original 1955 ride is missing from this picture? Photo by Jeff Bray.

The 1955 chart accompanying the model has its problems, as well, presumably because it must have been based on a graphic produced in 1956 or later.

28. Wagon tracks wrong – The map also shows just two trails through Frontierland—and they aren't the proper shape (they don't even match the model).

29. Casa de Fritos out of place – The chart lists the Mexican restaurant at its later location (now Rancho del Zocalo) not its 1955 site (the back of Riverbelle Terrace).

One final "error" likely wasn't the model's, but my own. For years, I've carried around—and shared—this false tidbit, gleaned from the fragile recollections of aging park pioneers. The model has cleared it up, once and for all.

30. Adventureland was a dead end! – Supposedly, Walt was obsessed with consistency in theming. According to legend, he once fired a spaceman for walking through Frontierland—or maybe it was a gunslinger for walking through Tomorrowland. So I've always wondered why, if Walt was so preoccupied with logical theming, why did he design Frontierland, Fantasyland and Tomorrowland as self-contained dead ends, entered only from the hub, yet put a short cut at the back of Adventureland into Frontierland?

The model answers the question: Adventureland, for a very short time, was also a dead end. Sharp old photographs and a high-powered magnifying glass confirm the long-forgotten fact. The short-lived blockade of trees that closed in Adventureland also explains how the awkward, congested behind-the-scenes complex between Adventureland and Frontierland came to be where it is.