Year of a Million Yawns

If you think about it, it's actually a time-honored Disney tradition. Disneyland's popular 30th anniversary promotion, the Giftgiver Extraordinaire, was followed by the tacky Circus Fantasy. The unforgettable Party Gras parade for the 35th was replaced by the highly forgettable Celebration USA parade. And, the beloved Main Street Electrical Parade gave way to the belabored Light Magic.

So, perhaps it's only fitting that a promotion as successful as Disneyland's Golden Anniversary celebration be succeeded by something as bland as the coming "Year of a Million Dreams."

Over the course of a year (in Disney time), Disneyland and Florida's Magic Kingdom each will pass out about 2,000 prizes a day to random guests. Disney has heavily hyped the more spectacular awards (a night in Cinderella's Castle, traveling to Disney parks around the world to star a parade, invitations to private parties, one-on-one time with princesses). But the PR team has been suspiciously silent as to what will constitute the remaining 999,000-plus "dreams."

Over the next few weeks, cast members will hear a few more details of the program. Based on their department and schedule, all will attend a mandatory two-hour orientation in the main auditorium at the Team Disney Anaheim building (the resort's corporate headquarters). The presenters will reveal how the Disney Dreams will be given away and unveil the new shows, attractions, merchandise and "celebration buttons."

The "special wishes" will be granted by "Dream Squad" cast members, wearing blue shirts and pants with a white vest. At random, they'll award guests with "dreams" such as "special pin lanyards, VIP admissions to shows, or DreamEars-mouse ears with blue sky and clouds on them," said an employee attending one of the first orientations. "Cast members have to apply for the position, and the exact procedures on how the dreams will be given away were very vague." He described the overall presentation as "painful."

A new "Pixie Dust Pin" program will help create opportunities for guest interaction with cast members who didn't make the Squad. Regular employees will award guests with two identical Tinker Bell pins?one for the guest to keep and the other for the guest to give to another guest.

"Everything was really underwhelming," remarked another cast member who sat through the presentation. "Nothing that would strike you as new or interesting info. It was all stuff that's been going around, you know, suites, Golden FastPass, food, etc. The Golden Fastpass is pretty silly, though; on slow days it's useless. It is a small square that says 'Golden FastPass' with tabs go around it. Each tab has a FastPass attraction name. So I imagine it's just one use per attraction. Definitely a bummer compared to the 50th promotion."

Cast members also caught a peek at the new employee nametags: white or silver with a castle-in-the-clouds at the top. So the design can be used on both coasts, the castle looks like a cross between Disneyland's and Disney World's. In fact, whereas the 50th anniversary featured gold everywhere, the new promotion's primary color scheme will consist of sky blue, white and silver. The first merchandise tie-ins?clothing imprinted with a generic "Disney Parks: Where Dreams Come True"?arrived at the Emporium late last week. 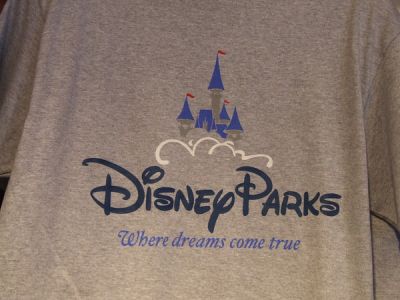 But more than sharing too many secrets, the presenters spent most of their time reminding cast members how to treat guests properly to make their stay a pleasant one. Each cast member was handed a brochure that outlined the basics of the promotion, but emphasized that they should plan ways "to interact with guests, as well as spontaneous opportunities to initiate guest interaction." The idea was to give every guest a "transformational experience."

Yet, that's what every visitor should expect from every Disney employee every day. An inherent flaw in the new promotion is that, unlike the giveaways of the mid-1980s, not every dreamer wins something. And, Disney is billing the million prizes they do give away as "once-in-a-lifetime experiences," making it difficult for the company to get by just giving thousands of people a churro or a sheet of stickers.

As part of the Year of a Million Dreams, beginning October 1, Disneyland will be receiving three new interactive shows?all currently playing at Walt Disney World. The Tomorrowland Terrace will play host to the Jedi Training Academy, the Fantasyland Theatre will receive the Princess Fantasy Faire, and Disney's California Adventure's parade corridor is getting the High School Musical Pep Rally.

Monorail of the Future

The Monorail closed two weeks ago to begin relocating the Tomorrowland station's elevator, entrance and exit ramps, better accommodating the return of the Submarine Voyage. Monorails should be back in service by Christmas.

Then, in the spring, expect the first of an entire new fleet. Workers in the Roundhouse were recently shown illustrations of the new design. "It is a combination of the current design and 'Old Red,'" said one source. "The driver will be sitting in a cockpit blister. It is still unknown if it will be completely automated, which is something that is hotly debated. The Monorail drivers still prefer having some kind of control."

Although not evident from the drawings, rumors are that the seating has been totally reconfigured to increase capacity.

Finding Nemo's Submarine Voyage remains on track for a summer completion. Rockin' Space Mountain and Rockin' California Screamin' should power up in the spring. In the evenings, the music for both roller coasters will switch "to new soundtracks and technology... both attractions will temporarily transform into unique rock'n'roll experiences with music that will be custom choreographed to heighten the experience with every twist and turn."

And, as successful as the Golden Anniversary promotion has been, Merchandise cast members report that there is such a large surplus of unsold 50th trinkets, that the majority of it will be destroyed once pulled from the shelves. Wait! Call the Dream Squad! Those excess golden ears must be somebody's idea of a "once-in-a-lifetime experience"!