The End of Tom

Yes, I know that park maps will still claim that there is a Tom Sawyer Island in the middle of the Rivers of America. But for all practical purposes, Pirates Lair will completely overshadow any traces of Mark Twain.

The confusion began four months ago, when online columnist Al Lutz leaked that Disney had planned to replace Tom Sawyer Island with a Jack Sparrow Island. Immediately, the mainstream media jumped on the story. The public wailed. An opinion piece in the Los Angeles Times lamented the loss of a literary icon. Disney fumed. Fortunately, someone at the company reminded everyone that Twain had written a bit about Tom Sawyer's adventures with "river pirates." Brilliant! Disney could pacify the purists and still add pirates by renaming the attraction Pirates Lair at Tom Sawyer Island. 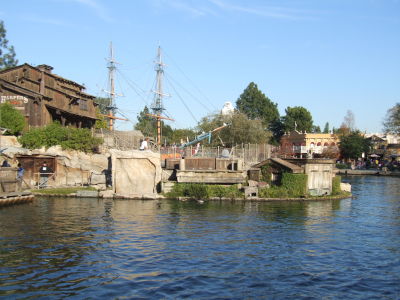 The Fantasmic! stage will be getting a new daytime stunt show. Photo by David Michael.

Of course, that didn't mean they changed their plans to completely remodel the island into a pirate-themed playground, complete with performances by Jack Sparrow, the Bilge Rats, and the Boot Strappers, interactive special effects, act-like-a-pirate lessons, and a full-scale stunt show on the Fantasmic! stage, visible throughout Frontierland as well as New Orleans Square. For now, the caves, bridges and treehouse will remain, but will be redecorated and laden with piratey special effects and activities.

"Forget the river pirate theme that has been mentioned by the park," said one insider. "It will be a Pirates of the Caribbean island. The paper (O.C. Register, which published Disney's literary justification for the change) swallowed Disney's smokescreen hook, line and sinker."

The island will be overhauled in two phases—a quick 15-week initial conversion and then a more extensive rebuild in the coming years to coincide with a planned fourth Pirates film, which hopefully will incorporate a "pirates lair" into its narrative. 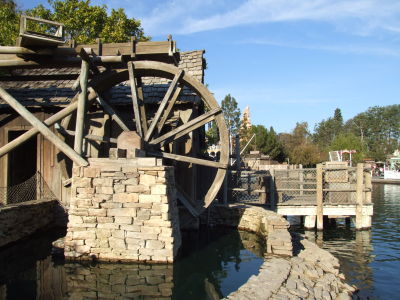 Harper's Mill will remain but the entire atmosphere of the island will change. Photo by David Michael.

The bright side is that the oft-neglected island will get some attention. It should also get additional rafts to accommodate its increased popularity.

And, when Pirates Lair opens in May, so will Fort Wilderness—or, should I say, the guest restrooms inside Fort Wilderness. Although the fort's massive log gates will finally be reopened, a wall will direct guests to the restrooms only. When phase two of the remodeling begins, the entire fort is to be torn down and rebuilt as a stone fortification patterned after the movie's Port Royal. At that time, the island's security officers will trade in their current cavalry duds for British Marine uniforms.

The bad news is that another one of Walt's originals, which gave kids the chance to run free and use their imaginations, is going by the wayside, even though it's currently a shadow of its former glory (see "Tom Smaller Island" from August 14, 2002).

"A lot of guests and former and current cast members were visiting the Island this past week to say good-bye to an old friend," noted one River worker. "Many wanted to walk down the dirt paths and traverse the suspension bridge, or go through Injun Joe's Cave one last time. Many were taking photographs around the island's landmarks. A grandfather was showing his young grandson the rocks his father climbed as a kid and the caves he chased his sister through. I heard him say how he missed those 'simple days.'"

It's funny. Years ago, when Disneyland was a much smaller place, it seemed a lot bigger to me. Sure, I was smaller. But back than Disneyland's seemed so much more varied. One minute I was watching an authentic Indian ceremony or riding a real mule through a real desert, the next I was exploring the jungles of Africa or the wonders of the deep, blasting off to the moon or into an atom, frolicking on some madcap adventure with animated compatriots, or riding a gondola though the center of a snow-capped Swiss peak. 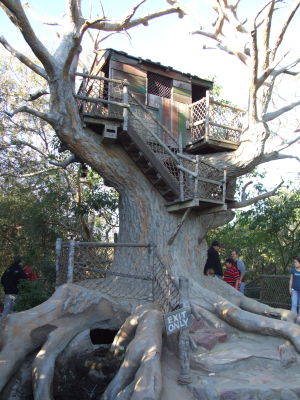 The treehouse will get pirate decor. Photo by David Michael.

There used to be fewer attractions, but more textures. Nowadays, the whole park is becoming one big Fantasyland, with a Pixar character lurking in every corner. Before it's too late, let's hope someone in management wakes up to the realization that Disneyland is more than just princesses and pirates.

Over at the under-construction Submarine Lagoon, cast members have noticed a new addition at the bow of each refurbished sub while at dock. "The device is underwater, and extends over 3 feet in front of each sub," said one eyewitness. "It looks like a metal T-shaped bar with two wheels on the end."

Apparently, the device will prevent the submarines from rearending each other, a constant concern for former sub pilots.

On the morning of January 13, the opening of the Matterhorn was delayed by about four hours. A ride operator said that steps on a set of access stairs collapsed while the cast members were performing their inspections before opening. No one was injured.

Desperate to combat high turnover and a shortage of qualified labor, upper management in Disneyland's Foods division wants to place the employee cafeterias under an outside contractor. Affected cast members would be redeployed at other locations. Managers promise that food quality and selection will improve drastically. Employees are dubious, considering they heard identical promises when the eateries were first converted to the "Star Dinerz" format. Ever since, cast members have complained of high prices, poor quality food, lack of selection, and absence of healthy choices. The park's move to "zero trans fat applies only to the guests' meals," one cast member noted. "There is an increasing number of cast members bringing their own meals from home. Evidence of this is the full refrigerators in the resort breakrooms and work lockers."

Yet the Foods union is warning that the move will only lead to more outsourcing. Union representatives have circulated petitions to protest the takeover. They're arguing that on-stage jobs could be next.

The resort's Custodial department switched to the computerized Cast Deployment System (see "The Virtual Lead" from December 29, 2000) at the end of January. Some divisions have had more difficulty than others in embracing CDS. I expect Custodial to be one of them. A little freedom had been one of the few perks of being a sweeper.

The Disneyland Fire Department Patrol Rescue Jet (see "Rapid Response" from October 12, 2006) has been experiencing a few problems while operating on the Rivers of America. The Jet Ski operates like a water jet engine. There is so much garbage and debris in the water, that the water intake screens keep getting clogged.

Old-timers blame the "legacy of T." That's T. Irby, the notorious one-time head of Disneyland Facilities recruited by Paul Pressler. "He was the one who gave the order to tear down the Twin Sister Falls to save money," said one employee. "The falls held giant water pumps and filters, which filtered the water and kept it clear of trash."

Changes are also coming to Disneyland's Facilities division, to be officially announced February 25 and implemented about four weeks later. The primary switch is the elimination for most of the maintenance crew of the "4/10" schedule (10 hours a day, four days a week). Most workers sounded unhappy with the move to five eight-hour shifts, since it will add another day's round trip to their weekly gas bill and likely result in their shifts beginning and ending at less traffic-friendly hours.

Worse, was how the plan was revealed at a meeting of the graveyard shift January 24 by one Facilities executive—an ex-military holdover from the Irby Regime. The exec incurred the wrath of the hundreds of employees in attendance by explaining that the company's scheduling needs far outweighed any consideration of employee morale. This, coming three days after a service awards banquet during which Jay Rasulo and his senior staff crowed and glowed with pride about cast members being so very important to the company.

Couple the public's natural skepticism for anything free with poor publicity for Disney's "Year of a Million Dreams" promotion (see "Year of a Million Yawns" from September 6, 2006), and you end up with dozens of guests who, upon being informed that they've won a prize, politely decline, assuming there must be some kind of catch.

But to avoid any confusion and conflicts, Disney designed the contest so that every winner is unmistakably defined, down to the exact spot they're in at a precise second. So whenever guests turn down a prize or don't qualify (say, because they're off-duty cast members), the Dream Team prize patrol can't just offer it to someone else.

One of the splashier examples of a guest who backed out of a major prize occurred about noon Wednesday, January 30. A small stage set up at the water's edge of the Rivers of America in front of Pirates of the Caribbean. Video cameras and studio lights were trained on the spot. A rolled-up banner was seen hanging from the Mark Twain. The front of the Island was cleared of guests. New Orleans Square bands began playing and... nothing.

According to a cast member familiar with the non-event, "the Dreams computer said that a family was to get a special prize. A family did show up at the time and place, and just as Dream Team cast members were to award the prize, they realized the family did not qualify after talking with them. So, after that, the lights, cameras, and guest control ropes in front of Pirates were taken down."