Varmint Troubles and other news

At Disneyland, after the sun sets and the crowds begin to thin, an army of reclusive characters streams out of the woodwork to take over the park. No, I don't mean the third-shift maintenance and custodial workers. 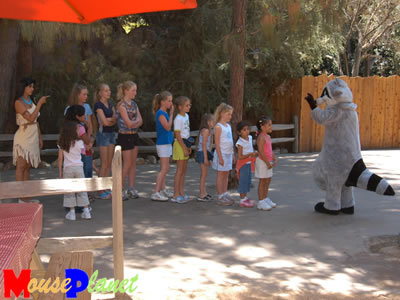 This fall, there have been reports of raccoons roaming the walkways of Disneyland. The masked bandits evidently have settled into the backwoods of Frontierland and increasingly are coming on stage to look for food, leaving a trail of upended trash cans in their wake.

Disneyland's feral cats are legendary. And reports of mice, rats, skunks and opossums are not uncommon. But raccoon sightings are relatively new. Cast members and guests have spotted raccoons:

"I think it is partly due to the abundance of places to hide," speculated one cast member, "And cast members have been sloppy lately when it comes to securing trash."

He reasoned that Disneyland's Circle D Ranch, concerned that a guest might get bitten, must have contacted wildlife agencies about the problem. But the relevant agency, County Animal Control, has no record of the park seeking such assistance. 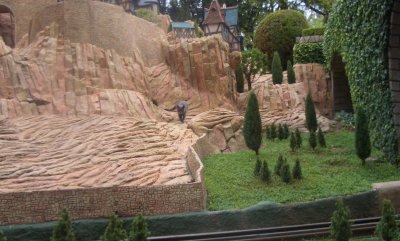 BIG CAT: A number of feral cats make their home at Disneyland. This black feline was spotted early one morning descending the miniature steps down Cinderella Castle cliff at Storybook Land. I suspect he was going down to get the newspaper before breakfast. Photo by David Koenig.

Animal Control's community outreach supervisor, Ryan Drabek, said a private permitted company could be contacted to remove the animals, but "if they're not putting anybody in danger, we recommend against relocating wildlife. We suggest keeping lids on trash cans, clearing out standing water, and encouraging people to stay clear of potential shelter, such as large brush areas or unsecured buildings. (Raccoons) look for dark, warm, dry."

If your paths do cross at Disneyland, don't try to pet or feed a raccoon. Drabek said, "We recommend viewing the wildlife... from a distance."

Although it was Disneyland that last year thought up the idea to adopt the presidential pardoned turkeys, Walt Disney World received this year's birds, May and Flower. Not to worry, 2006's turkeys—Flyer and Fryer—are still alive and well at the Big Thunder Ranch, thanks to an altered, "healthier" diet.

When news broke this summer that Disneyland would begin outsourcing operations of its employee cafeterias, cast member reaction appeared split between resentment ("Great, there go more Disney union jobs!") and hope ("Well, the food can't be any worse than it is now!"). But the vendor, Sodexho, came in and instantly won high praise for its improved food quality and remodeled facilities.

The honeymoon may be over. Complaints have started trickling in after bad experiences at the Inn Between, Eat Ticket, and other eateries. Noted one cast member: "While prices have remained almost the same, portions are getting smaller, food quality is getting poor, and cast members appear to be getting sicker. Food is not kept as cold or as hot as it should be. Entrees I have ordered were cold or lukewarm. They do not use covers, so the hot food dries out or gets cold, even though it is supposed to be kept warm underneath by hot water. Cold items are sometimes left outside and not sitting in ice to keep them cold."

Perhaps most telling, several salaried employees have been spotted discreetly removing their nametags and purchasing their meals from the more expensive—but presumably safer—on-stage eateries.

Disagreements have also arisen over the new snow coverings on Sleeping Beauty Castle. At night and from a distance, the lights and decorations are absolutely stunning. Unlike the tacky "birthday cake" overlay of Disney World's castle in 1996, Disneyland's holiday makeover doesn't obliterate a familiar landmark, but freshens it and enhances its beauty.

Unfortunately, closer inspection—particularly in broad daylight—reveals a less-than-attractive tangle of wires and cables. During the day, the biggest eyesores were the long strands of icicle lighting that hung from most roof edges. "It looked like a crate of white spaghetti was dropped on the castle," groused one critic. (The icicles were temporarily removed in mid-November, supposedly to wrap them in frosted plastic.) "It looks great at night, but it still looks like a mess during the day," he said. "Did you notice all the power cables and wires to keep the snow decoration on? Some of the roof coverings are poorly fitted. The whole thing looks rushed, and poorly designed and executed."

In addition, the decorations do not fully extend all the way around the castle, creating an unfinished appearance when viewed from Fantasyland. But overall the overlay has been so popular that Disney should have the opportunity to perfect the effect for next year. 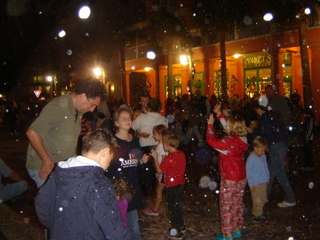 For those who can pull themselves away from MouseFest for an hour next weekend, between snowfalls I'll be giving a free multimedia presentation on the early days of Walt Disney World. The festivities begin at 7:30 p.m. Friday December 7 at the Reading Trout Bookstore, which fronts the lake in Celebration's Town Square. Rumor has it that during the event, the store will be offering all of my books—including the brand new Realityland: True-Life Adventures at Walt Disney World—for 10% off. The following night, Saturday December 8 also at 7:30, Imagineer Jason Surrell will address the crowd at the Reading Trout Bookstore, with a Q&A on his new book, The Disney Mountains: Imagineering at its Peak.