Send in your suggestions, comments or tips via our email feedback form or via voicemail on our toll-free feedback line (1-866-939-2278). You can also make suggestions by replying to this post.

If you want to contribute a story for our Monday Magical Moment segment (and possible inclusion in the Cast Place column here on MousePlanet), you can either use our email Magical Moment story form or the toll-free feedback line. (We love it when you use the voice mail system, because then we can play your call on the show!)

Since the news was quiet this week (but not the parks), we brought you a look at the top Walt Disney World stories of 2007.

This and other news can be found in this week's Walt Disney World Park Update.

This and other news can be found in this week's Disneyland Park Update.

There were only a couple of stories of interest this week: 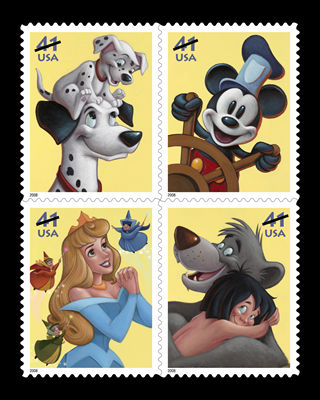 The U.S. Postal Service released the images for the 2008 Art of Disney stamps. Can anyone figure out why these images were selected to portray "Imagination"? Image 2007 USPS. All Rights Reserved.

Because there was so little new, we decided to also look at the top stories about The Walt Disney Company from 2007:

You can send us feedback via email or by calling our toll-free feedback line at 1-866-939-2278. Don't forget that we love voicemails because then we can put your voice on the show!

Please take a few minutes to complete our listener survey. It helps us learn more about you and what you like most about this podcast.

Thanks to our West Coast correspondent Andrew Rich, and audio engineer and sound editor Steven Ng.