My daughters have been waiting anxiously for the sequel to the The Princess Diaries. I was also looking forward to the film because the first movie was charming and fun and one of those rare movies that kids and adults could enjoy together. So we all had high hopes heading up to Hollywood to see The Princess Diaries 2: The Royal Engagement and attend the Princess Tea after the screening.

The Princess Diaries 2 picks up five years later, opening with Princess Mia (Anne Hathaway) graduating from college and preparing to assume the throne of the fictional country of Genovia. A wrench is thrown into the proceedings by the Genovian Parliament, which decides to adhere to a centuries-old law that state that a princess must be married in order to become queen. If that plot point seem a bit… far-fetched, just remember that in context it makes more sense than them saying, “We have a centuries-old law that any film that grosses $100 million must be followed by a sequel.”

With 30 days to find a groom, Mia faces the prospect of an arranged marriage. Two suitors, Andrew (Callum Blue) and Nicholas (Chris Pine), pique Mias interest, and form the main conflict of the film. 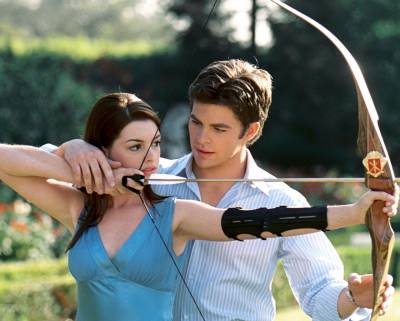 Director Gary Marshall described the plot in a press release this way:

“She is fond of one of these boys; one of them could help her become the queen and help her run the country, while the other is an adversary who is trying to take over her job.”

The two boys are cute but a bit bland. But the real sparks start flying when villain Viscount Mabrey (John Rhys-Davies) shows up. He's easily the most entertaining character in the film, if for no other reason than—having played Gimli the dwarf in The Lord of the Rings trilogy—you expect him to pick up an ax and start swinging it when he's really angry at Queen Clarisse (Julie Andrews). Just the slight possibility of that kept things interesting.

Another character not found in the first film is Princess Asana, played by Disney Channel mainstay Raven. The only reason she is in the film, it seems, is to hawk her singing career. She sings a little song with Julie Andrews (more on that later) and has a song in the credits; her total screen time is under 10 minutes, thank goodness. 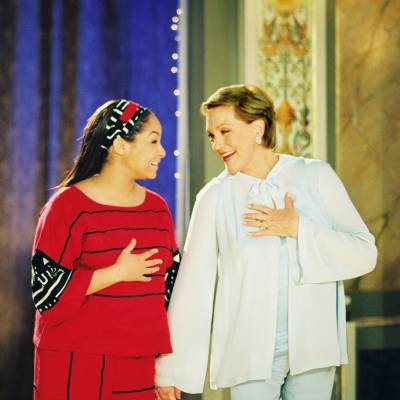 Yes, Julie Andrews does sing. Unfortunately, the song itself is incredibly cringe-worthy. Julie Andrews attempting hip-hop with Raven… it's hard to look at the screen while it's happening.

A big to-do was made of the fact that Andrews sings in the film. She also sang in the made-for-TV movie Eloise at the Plaza two years ago, but in the raucous cockney character of Nanny. Her voice in the The Princess Diaries 2 is more in keeping with an appropriately aged Mary Poppins. My girls declared it their favorite song in the movie, so it just goes to show you that the makers of this film really know their target audience.

Overall, our reactions to The Princess Diaries 2 were mixed. It lacked the charm and appeal of the first movie. Missing were some of the more engaging characters from the previous film, like Mia's first boyfriend Michael (Robert Schwartzman) and her nasty school mate Lana (Mandy Moore.) Additionally, most of the characters carried over to the sequel have little to do besides watch Mia bounce between her two suitors. Her best friend Lily (Heather Matarazzo), who almost steals the first film, is relegated to patting Mia on the back and entertaining whichever suitor is not with Mia. 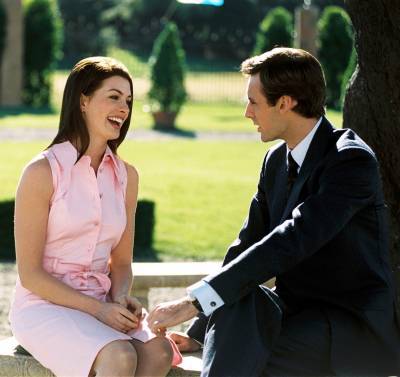 It feels curmudgeonly to criticize the film because my daughters, ages 7 and 10, loved it. They declared it “even better than the first movie” and “better than Ella Enchanted” When I tried to determine why, my youngest gave a long explanation about how it was funny when the guards got hit by the flying mattresses and fell down, and when the cat got chased around by the palace poodle. In other words, the slapstick moments really spoke to her.

My older daughter had a harder time finding concrete reasons to explain why she liked the movie. She finally said, “I guess it was because I've gotten tired of watching the first Princess Diaries all the time. This was all brand new.” They enjoyed seeing the characters, whom they are so familiar with from constant DVD watching, in new situations.

It also explains, in a way, the bewildering success of the direct-to-video sequels drawn from classic Disney films. Children like to see familiar, beloved characters in new stories and situations. That's why The Princess Diaries 2: The Royal Engagement will be a great success; not because it's groundbreaking cinema, but because kids are going to love it. 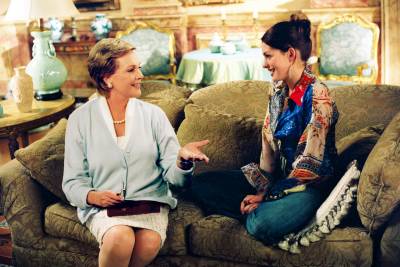 And even though parents might roll their eyes a bit, they should remember that it could be worse: It could have been rated PG-13. A big thank you to Disney for not throwing in some gratuitous language or sex just to make it more “edgy.” Even worse; it could have been Cinderella IV: The Royal Midlife Crisis. Count your blessings where you can find them. Go. Take the kids, and feel like a good parent.

As they did after the first engagement of The Princess Diaries and Freaky Friday at the El Capitan Theater in Hollywood, Disney is putting on a princess tea. The Disney Princess Tea is held in the top floor of the Kodak complex across the street from the El Cap—plenty of ushers are on hand to help guide tea goers to the large banquet area across the street from the theatre. 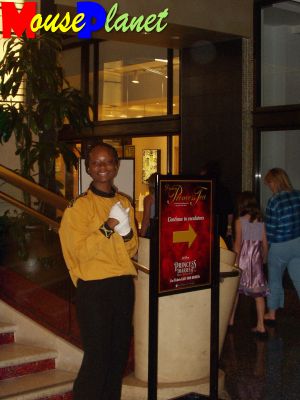 No chance in getting lost on the way to the Princess Tea; plenty of ushers are on hand to guide guests. Photo by Lisa Perkis.

Once we arrived at the banquet room, we were escorted to our table. The tables seat 10, and if you do not have enough in your party to fill a table, you will be seated with another party. The tables are lovely, with fresh flower centerpieces and fresh white linens. Each place setting has party favors like See's Candy and Bonnie Bell lip gloss.

The tea menu contains a variety of scones, sandwiches, pastries and fresh fruit salad. Even my picky younger daughter found something to nibble on. The wait staff is plentiful and wonderfully attentive. The girls had fun picking out their own personal tea bag from the wooden tea box and stirring lumps of sugar into their cup more than actually drinking the beverage. 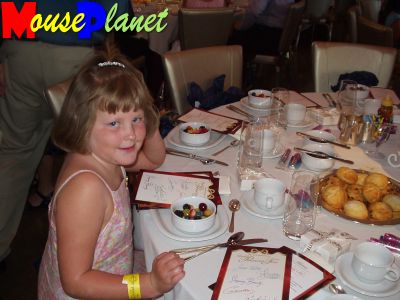 Everything looks almost too pretty to eat. Photo by Lisa Perkis.

As in previous teas hosted by Disney, there are princesses galore to greet guests. A change from the last tea we attended was the addition of Ariel to the princess lineup. At first I thought they were going to wheel her around the tearoom a la Ariel's Grotto (a restaurant in Disney's California Adventure), but she stayed stationary on her large rock and bid the little guests to come to her. The rest of the princesses circled the tables to meet and greet the participants. 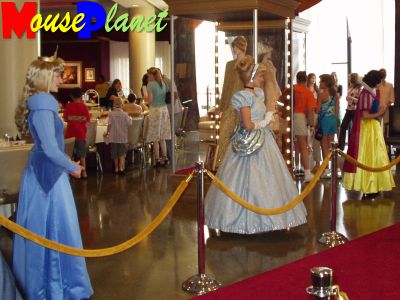 The princesses await their guests for tea. Photo by Lisa Perkis

Several glass cases with costumes from the film were situated around the tearoom, and it was fun to get a close-up view of the lovely gowns that we just saw up on the screen. 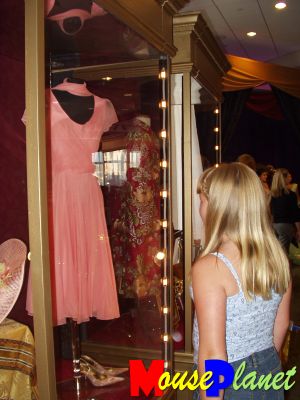 A close-up view of the gowns worn in the film. Photo by Lisa Perkis.

The biggest hit of the tea for the young ladies was the dress-up stations located in several areas of the banquet room. In past teas, princess costumes were available for children to pose in. This time, fantastic miniature wedding dresses, tiaras and bridal veils supplied from a bridal gown chain were available, with little sitting areas for salivating parents to direct their children to and snap pictures. The staff working at each dress-up station wisely passed out baby wipes to clean up children sticky from jams and scones before the lovely dresses were modeled.

Staff stationed at each dress-up area help the little girls do up all those buttons. Photo by Lisa Perkis

The boys were not left out, either. Swords, helmets and shields were available at each dress-up station for the young princes to pose with as well. Not as ultra-cool as the gowns, but hey, at least they tried. My girls wanted to get their hands on the costume jewelry and dresses so badly that it was hard to concentrate on the tea. We finally got up mid-meal and went to the dress-up area. 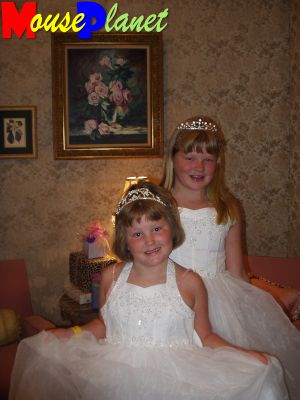 And the finished product…two little princesses. Photo by Lisa Perkis

General admission prices for the movie at El Capitan plus the Disney Princess Tea are $26 per person (ages 3 and up). VIP admission, which includes popcorn, soft drink and a reserved seat plus admission to the tea, is $37 per person. The general admission price seems the far better deal. Eleven extra dollars just for popcorn, soda and a center seat just doesn't seem worth the money to me. Arrive a few minutes early and get a seat right next to the reserved area, and share a box of popcorn.

Is the general price worth it? For a special treat for some lucky little girls (or boys), I would say yes. We had a wonderful, memorable afternoon, took lots of pictures with princesses and even dressed up like a princess. Both my girls gave me a big hug and “thank you” at the end of the day.

Worth it? Oh yes.

The Princess Diaries: The Royal Engagement is a Buena Vista Pictures release.