Fall is officially here, and the movie calendar is ready to move out of doldrums of late August and September, into the season of movies that aren't brash enough for summer but also not deep or serious enough for release during the awards season. I'm ready for it too—for the next few months there'll be no more going to a movie just because it looks like it might have a good fight scene. I want drama, pathos, examination of the human condition. It is time to be filling my evenings in the dark with movies boasting their film festival credentials instead of a dozen special effects companies.

So I'll admit that I wasn't really in the mood for The Game Plan.

On paper, there isn't much to recommend in it. A man living the unexamined life of luxury, success and narcissism unexpectedly has the child he never knew of injected into his life, creating confusion, but ultimately teaching him the important things about life. I'm pretty sure there are three shelves of such movies at Blockbuster.

In this case, the man is Joe "The King" Kingman (Dwayne Johnson), quarterback for the Boston Rebels professional football team. The success part is that he and the team are perennial contenders for the league championship even though so far they've fallen short every year. The luxury part is the money of a top quarterback and the toys that could buy. Narcissism is demonstrated by the 8x10 (foot) photos of himself in his living room.

The child he never knew about is 8-year-old Peyton (Madison Pettis, in her movie debut), who just shows up at his front door one morning with a note from mom saying essentially, "You never knew, here she is, can you watch her for a month while I'm in Africa?" 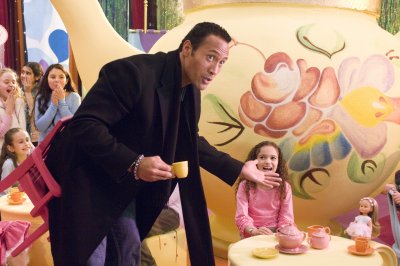 The situation ripe for comedic confusion? The NFL playoffs have just begun and the Patriots Rebels are again contenders for the Super Bowl league championship so he doesn't really have time for learning to be a parent.

On one level I was right to dread seeing The Game Plan. There is hardly an original element in it that hasn't been seen before. It is like playing Disney Movie Bingo: a lot of Three Men and a Baby, blended overtones of Mr. 3000 and The Pacifier, add just a dash of Polyanna and wrap the whole in the wholesome patina of the squeaky clean 1970s live action comedies. In other words, if you're over 13 this isn't a movie with much to offer.

If, however, you've got young kids and are hungry for a good old-fashioned "family movie," then The Game Plan is good enough. It is good natured, it is squeaky clean. There are no drugs, no sex, and no violence (beyond solid hits on the football field). The movie itself is wish fulfilment for the pre-teen set as Peyton gets to live in luxury surrounded by ballet and football. 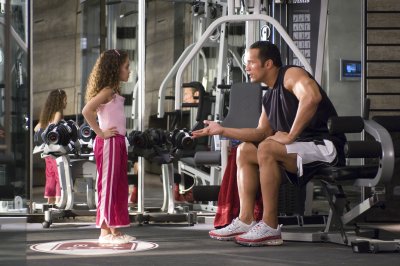 Sometimes adults have to make sacrifices and watch movies that kids love but are otherwise excrutiating—but on sheer charisma alone, Dwayne Johnson and Madison Pettis prevent that. They can't perform the alchemy of making a kids' movie into adult entertainment, but they fill the screen with a sense of fun that is hard to resist.

Dwayne Johnson, better known as professional wrestling's the The Rock, continues to be a surprise on screen. Not the surprise that Mark Wahlberg has been coming out of the world of rap and underwear modeling, but orders of magnitude better than any other wrestler's attempt to move on (it is a sign of misspent youth that I can actually compare and judge the cinematic careers of Hulk Hogan, Mr. T, Zeus, and Rowdy Roddy Piper). Johnson had slimmed down a bit in recent years but this role has him back in full wrestling shape, and several scenes in the film put him on display, without any sexual overtones.

Madison Pettis, probably familiar to your young children from various appearances on The Disney Channel and an early career in Barney videos, has that big-eyed earnestness that works only until a kid is about 10 years old, at which point it somehow begins a slide into creepiness. But boy is it cute while it is still working.

The supporting cast of football players, agents, and hangers-on are mostly generic, but provide the wall off which young Peyton's softening influence is reflected. As mentioned, this movie is old school. How old school? There is, of course, a romantic interest provided for Joe Kingman as he learns his life lessons, and it is in the form of ballet teacher Monique Vasquez (Roselyn Sanchez of TV's Without a Trace). How is this budding romance presented on screen? No, they don't immediately fall into bed with each. Nope, they don't even kiss. He just asks her out on a date. That's so old school that it almost feels cutting edge. 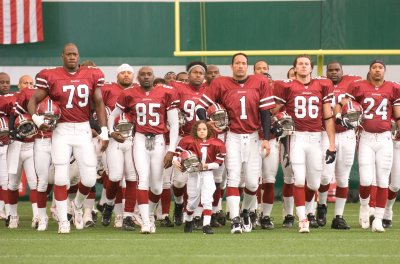 The rest of the movie is similarly child-friendly. The movie is somehow rated PG for "mild thematic elements" but for the life of me I can't figure out what they are. I suppose it must be the football and one moment of risk faced by Payton, but on any scale in which this a PG movie Sleeping Beauty would have to be a hard PG-13 and one curse word away from an R. I really hope the "mild thematic elements" isn't that Madison's parents are divorced and she was born after that.

So take your kids. Odds are this will quickly become yet another mostly forgotten Disney family comedy but it will be pain-free and just maybe in 20 years it will be one of those fondly remembered (but deep down, known to be not particularly good) movies. Kind of like we now regard the movies of Kurt Russell's teenage years. Plus, rare for a kiddie movie, it has only one fart joke and it is from such an unexpected source that it is almost funny.