Cypress Gardens closes – A golden age is quickly fading away in central Florida. Cypress Gardens, the park fabled for starting the tourist craze in central Florida in 1936, is no more. In a sudden and unexpected announcement this past Thursday, the park announced that Sunday, April 13 would be its last day of operation. Look for an article from our own Dusty Traveler this week as he looks back on this Southern belle of a park.

Getting closer to Space: The first wave of attraction Cast Members will transfer to Mission: Space in May with the next group coming on board in July. If this schedule holds, it would indicate that we could get a rope drop at Epcot's newest attraction in early August, preceded by several weeks of soft openings. According to several reports, the new attraction will have a height restriction of 44", but will have a well-themed playground to entertain those who'll have to wait.

Creepy or cool – you decide: A travel agent shared this information about a new toy available for rent and purchase at Walt Disney World.

He's the ultimate Walt Disney World insider, a cheerful friend who enhances a theme park visit with timesaving tips and fun facts. Who is he? Pal Mickey!

Available for daily rental or purchase, Pal Mickey is a talking Mickey Mouse toy that entertains and assists guests in each of the four theme parks at Walt Disney World Resort — Magic Kingdom, Epcot, Disney-MGM Studios and Disney's Animal Kingdom.

Pal Mickey helps guests get the most out of a Walt Disney World vacation by bringing each theme park to life as a helpful tour guide. The huggable plush toy offers reminders about parades and show times, shares stories and trivia, recommends attractions, plays games and tells guests where to locate Disney characters. Each 10 and a half-inch Pal Mickey responds in all of the Walt Disney World theme parks.

The interactive toy joins recent pioneering Disney services such as wireless language translation for guests with limited English fluency, wireless text captioning for guests with hearing disabilities and the patented Disney's Fastpass system that eliminates the need to wait in line at popular attractions.

“See the names on those second-story windows?” Pal Mickey might say as guests stroll along Main Street, U.S.A. “Those folks helped Walt Disney build this Magic Kingdom!” In fact, the windows bear the names of key Disney cast members instrumental in the development of Walt Disney World Resort.

“Say, 'Fantasmic!' will be starting in about an hour,” Pal Mickey might remind Disney-MGM Studios guests about the park's popular nighttime spectacular. “If ya wanna see it, now's a good time to go grab a seat!”

Pal Mickey keeps the whole family entertained with Disney jokes and fun interactive games guests can initiate, whether waiting in line at the theme parks or relaxing in a hotel room — even back at home.

Pal Mickey is available to all guests as a daily rental ($8 plus tax per day and a refundable $50 deposit) or as a purchase ($46.94 plus tax). Guests who wish to keep a rented Pal Mickey can simply take him home; the deposit will be used as the total purchase price with tax.

Beginning in April, Pal Mickey will be offered at merchandise locations in each of the Walt Disney World resort hotels, and at select sites in Disney's four Florida theme parks starting in May.

Stitch in Tomorrowland – Disneyland's Space Mountain has recently been the source of several rumors involving a Lilo & Stitch overlay for Space Mountain. Several CM sources are saying that Stitch has been approved for Tomorrowland, except in Florida and it will involve a makeover of Alien Encounter. No other real details have been released, so this rumor could fade away as well.

SARS causing fears of low attendance – Reuters reports that Disney has expressed — in an April 10 filing with securities regulators — concerns that Severe Acute Respiratory Syndrome sweeping through Asia could impact attendance at Disney parks, especially Walt Disney World. The company already downgraded its 2003 earnings forecast based on an expected drop in travel because of the war in Iraq. 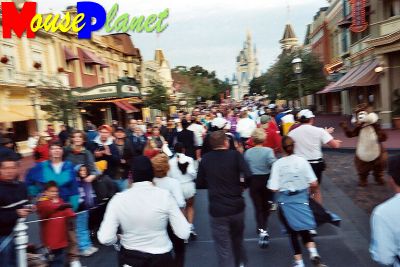 Runners in the 2003 marathon head towards the castle.
Photo by Alex Stroup.

A second chance for half-marathon hopefuls – The folks at Disney Sports seem to have recognized a good thing when they saw it. After registration for the Walt Disney World 2004 Half-Marathon filled to capacity in a record-breaking 12 days, a lot of people were left in the dust as they tried to decide whether they should double their training efforts to run the full marathon instead.

The outcry (and the opportunity to bring in additional revenue) must have been pretty loud, because the organizers of the event quietly increased the cap from 5000 to 8000 registrations last week.

If you were considering entering the Half-Marathon, you need to register right now, because 2000 of the 3000 additional spots have already been set aside for those on the wait list.

If you registered for the full marathon because the half was full, but really want to participate in the half marathon, you will need to register and pay all over again; registration rules stipulate that registration fees for one marathon is not transferable to the other.

To register, go to the Disney Sports Web site and select the Marathon/Half-Marathon menu item. 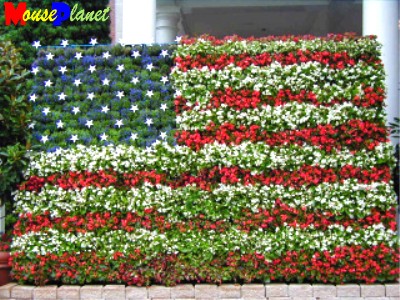 A floral American flag on display at the 2001 festival.
Photo by Brian Bennett.

Flower and Garden Festival Update – Walt Disney World has released more information about the 10th Epcot International Flower & Garden Festival. Each weekend of the festival will have a unique theme: 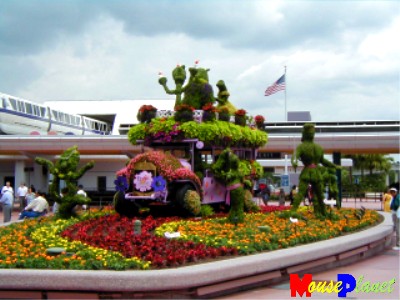 Dozens of character-based topiaries are a signature attraction at the festival.
Photo by Brian Bennett. 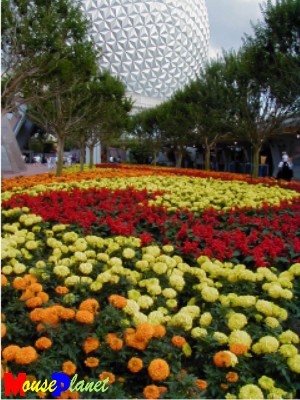 The Great American Gardeners series features the artists who created some of the festival displays.

Disney's Port Orleans Resort is undergoing a complete, multi-million dollar room renovation over the next two years that will include all new furniture, new carpeting and wall coverings, and a remodeling of the bathrooms.

Beginning May 4, Disney will not be booking new reservations into Disney's Port Orleans – French Quarter. 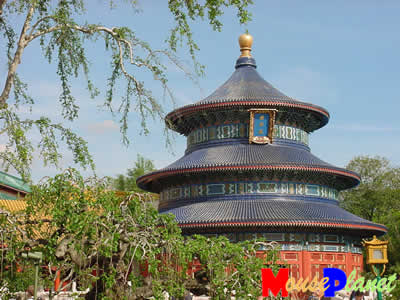 The Temple of Heaven in the China pavilion is open during the refurbishment.
Photo by Adrienne Vincent-Phoenix.

The Theater in Epcot's China Pavilion closes for refurbishment March 26 to May 22. The gallery, merchandise shop and restaurants continue to operate.

Great Movie Ride at Disney-MGM Studio closed for refurbishment on February 24. The ride was scheduled to return on April 13, but the closure has been extended through June 27.

April 22 – Earth Day. Visitors at the Magic Kingdom will have a rare opportunity to Meet & Greet with Jiminy Cricket near the castle. There'll also be free buttons available.

June 3 through June 9 – Gay Days 2003. This unofficial event is not sponsored by Disney. Event information can be obtained from the event sponsor.

The Radisson Resort Parkway, a MousePlanet sponsor hotel, is offering great rates to MousePlanet readers through December, 2003. Sample rates for selected dates and rooms are listed below. To take advantage of these special rates, make your reservations using the link found on this page.

If you are itching to break in your new Disney Visa card, you can receive a $50 onboard credit when you book a Disney Cruise Line vacation and pay with your Disney Visa. The offer is good for sailings through the end of this year. When you charge your cruise to your Disney Visa, you pay no interest for six months.

Annual Passholders can receive 10% off the price of their lunch meal at selected Walt Disney World Resort hotel restaurants, and the discount is good for up to three guests. The offer is valid Monday through Friday. Call 407-WDW-Dine for locations and reservations.