Last week, Disney announced that the Wonders of Life pavilion at Epcot would be closing on January 5 and only open seasonally. At the same time, they announced discount rates starting at $55 per night at the new Pop Century Resort. 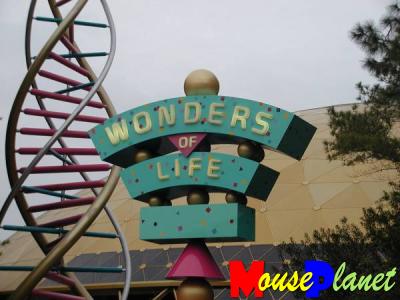 Wonders of Life, which many agree has needed some TLC for some time, is a victim of poor attendance, bad entrance placement, and lack of sponsorship. Many people rushing between the Universe of Energy and Mission: Space pavilions (or before the opening of Mission: Space, Test Track), have a difficult time noticing the narrow pathway to the Wonders of Life pavilion. Those who find their way in discover worn-down furnishings and attractions that are beginning to appear really dated. Without a pavilion sponsor—with MetLife dropping out years ago—Disney just doesn't want to spend the money on its own to refurbish or re-Imagineer the pavilion. When open seasonally, it will only be the attractions that are open. We are told that the Pure & Simple food counter and the Well and Goods Limited merchandise location will both remain closed.

…while Resort lower prices in January

The discount room rates at Walt Disney World will be good for travel from January 1 through February 11, but the reservations must be booked by December 29. At value resorts such as the Pop Century Resort, which opened on Sunday, rooms normally start at $77 during the off-season. The $55 rate is also valid at the All-Star Resorts. Other resorts have similar discounts available. The discount prices are also available with the Dream Maker Package, Dream Maker Package with Silver Plan Add-On and Dream Maker Package with Princess and Prince Plan Add-On. To get the discount rates, use booking code CTH when contacting the Walt Disney Travel Company or your travel agent. 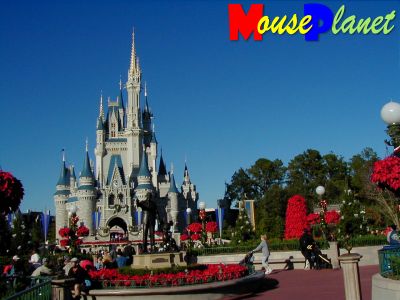 As mentioned last week, the trees surrounding the hub have been removed and replaced with poinsettias. After the holiday season, the poinsettias will in turn be replaced by magnolias. Photo by Brian Bennett.

The Disney Vacation Club has announced plans for a Member Homecoming event from May 25 through 27 of next year. Events include:

Tickets for the three-day event, which includes two days of Park Hopper access to the theme parks and one visit to Pleasure Island or DisneyQuest, cost $299 per adult and $279 per child (age 3-9) and go on sale Wednesday, December 17. Call DVC Member Services at 1-800-800-9800 for more information.

Last Thursday afternoon, with no fanfare, Walt Disney World unveiled its new Disneyworld.com Web site. (link) The new site includes photo tours of all resorts, lots of music and video, interactive graphics, and a new navigation system. It appears that not all features are working 100% correctly yet, but it does have a nice look and feel.

We first reported on a contract dispute between Walt Disney World at the members of United Food and Commercial Workers Union Local 1625 last month. After Disney threatened layoffs effective December 14, the two parties have finally come to an agreement. Disney had been trying to force 118 of the 205 to change from full-time to part-time status so that they would not have to pay them health benefits (which makes up 53 percent of all labor costs, according to the union).

As part of the agreement, which was approved by a 155-5 vote, the union agreed that workers could no longer be permanently assigned to one area of the resort, but that they could be sent wherever they are needed. Also included was a clause that states that the banquet workers will lose their full-time status if they do not work 750 hours between November 2 and May 1. We will see if there is a decrease in assigned hours during April as the workers attempt to meet this requirement. According to the union, there were 30,000 hours given to part-time workers that could have been worked by full-time banquet staff.

These negotiations are seen as a test case for next year's negotiations with unions representing about half of the resort's 51,000+ (51,600 as of September 30) workers.

The firefighters at the Reedy Creek Improvement District are now approaching two years without a contract, and have not had a raise since before September 11, 2001. Contract talks have again broken down, and the Improvement District and the Reedy Creek Firefighters Association/International Association of Fire Fighters Local 2117 are now at impasse. The firefighters plan "informational gatherings" in the near future, and plan to stop "extra" services.

The Reedy Creek Improvement District is the quasi-governmental operation that supplies fire, police, and utility services for a large area that is mostly composed of, but is not limited to, Walt Disney World. The firefighters are responsible for responding to all calls in Walt Disney World, as well as some of the surrounding area.

Florida Governor Jeb Bush told the Florida Legislature and the state's Congressional delegates in a letter that voters made an uninformed decision by voting without seeing a full cost impact analysis of the initiative. He urged them to support repeal of the constitutional amendment.

According to Bush, cost projections for Phase I, which would run from Tampa to Orlando, are at $2.3 billion and increasing, including a double track from Orlando to Walt Disney World and a single track from Walt Disney World to Tampa, with a passing lane near Lakeland. However, Howard Needles Tammen & Bergendoff Corp., the general consultant on the project, recommends double-tracking the Walt Disney World-to-Tampa portion of the rail to prevent possible contention and reliability issues. The additional cost to double-track that segment would be $258 million. Phase II of the project, which would connect Orlando and Miami, would cost an estimated $5 billion to $9 billion in 2002 dollars. In order to pay for the high-speed rail, many highway improvement projects already on the board would have to be delayed or cancelled. The governor vetoed the most recent bill allocating $7.2 million (including $2.15 million from the federal government) in funding to the Florida High-Speed Rail Authority. The FHSRA is continuing to work using federal dollars from last year. 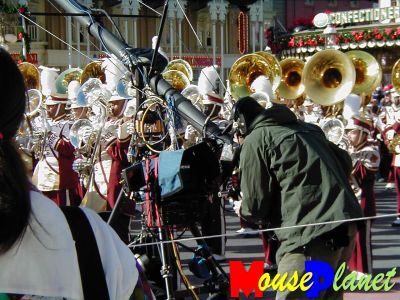 On Friday, December 5, and Saturday, December 6, the Walt Disney World Very Merry Christmas Parade was taped for its December 25 broadcast. The taping, which involved the floats going down Main Street one by one, sometimes several times, lasted a good part of each day.

Floats included the Haunted Mansion float first seen at this year's Mickey's Not So Scary Halloween Party's Boo-to-You Halloween Parade, a marching band, and several princesses in carriages and on horseback. Special "drop-in" segments were also filmed on Sunday. 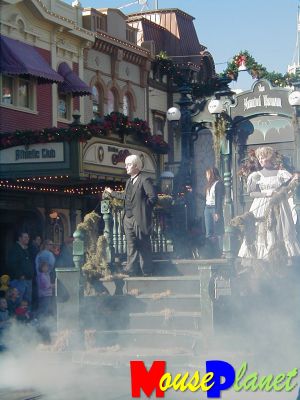 The Haunted Mansion float is a new addition to the Very Merry Christmas Parade, thanks to the current movie. Photo by Brian Bennett.

…Apparently, the Lunch and Dinner with a Disney Artist or Imagineer have been suspended as of December 19, 2003. We have no word yet on whether this is temporary or permanent.

…A new rumor has the Living Seas pavilion closing for a rehab in the March/April time frame. Rumors are strong that Audio-Animatronic characters from Finding Nemo will be added to the pavilion.

…Magic Kingdom's Adventureland has revised its opening hours again for the coming weeks. On Thursday, and Saturday this week, Pirates of the Caribbean, The Swiss Family Treehouse, and The Magic Carpets of Aladdin will open at 9am while the rest of Adventureland opens at 10am. On Monday, Tuesday, Wednesday, and Friday, all of Adventureland opens at 10 am. The next two weeks, through Saturday, January 3, ALL attractions in Adventureland, including the Jungle Cruise, will open at the same time as the rest of the park. Hours are subject to change. Also in Adventureland, as reported before, El Pirata Y el Perico Restaurante has the following special holiday operating hours: Saturday, December 20 through Tuesday, December 30: 11 a.m. - 4 p.m. Wednesday, December 31: 10:30 a.m. - 9 p.m. 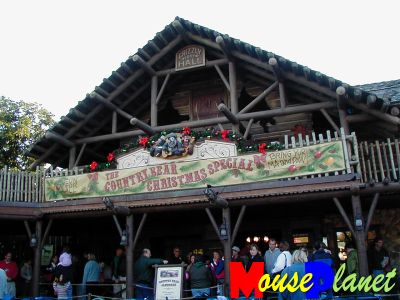 Walt Disney World has announced new discount codes for Annual Passholders, Florida residents, and the general public for check-ins January 1 to February 11, 2004. General public rates start at $55 per night, while AP and Florida rates start at $49 per night. These rates are also available with DreamMaker packages. Visit Disneyworld.com or MouseSavers for more details.

MouseSavers has announced special rates at the Celebration Hotel for readers of its web site. (If you haven't visited the site yet, please check it out!)

Get more details and the discount codes at MouseSavers.com.

That there is a new Disney's Visa “Kids Stay and Play Free” Package, available most nights January 4 through June 12, 2004, where when you buy a full-price Walt Disney World Dream Maker Package with your Disney's Visa card, for each adult on the package, one child (3-9) gets a free Ultimate Park Hopper pass for the length of stay. 4-night minimum. Plus you receive $100 in Disney Dollars per package at check-in! Go to Disney's Kids Free Web page (link) for more information, or call your travel agent and book using package code ZXFA. You must book your package by January 2.

Great rates at the Swan and Dolphin

Are you planning a trip this fall? Check out this offer from the Swan and Dolphin:

Get more details and the discount codes at MouseSavers.com.

Active U.S. Military personnel or spouses are also eligible for a 40 percent savings per night (based on the non-discounted price of the same room) at select Walt Disney World Resort hotels, and special rates on Disney Cruise Line sailings. This offer is available most nights through December 19, 2003 at Walt Disney World, and for most sailings through December 18 on the Disney Cruise Line. Hotel rooms and staterooms are limited at this special rate.

Disney is offering a special for active duty military — a free five-day park hopper ticket, as well as discounted companion tickets. Offer valid through December 19, 2003 and includes all active military personnel, including Coast Guard, as well as activated National Guard and Reservists. See their official Web site for more information.

The Walt Disney World Resort is encouraging visitors to buy their theme park tickets before they even leave home, by offering a slight discount on advance purchases. You can save as much as $22 per adult, per ticket with the “Advance Purchase Savings” program.

You can also receive these Advance Purchase Savings with packages purchased through AAA.

Receive 10% off the price of their lunch meal at selected Walt Disney World Resort hotel restaurants, and the discount is good for up to three guests. The offer is valid Mondays through Fridays. Call 407-WDW-DINE (407-939-3463) for locations and reservations.