Tear down the walls!

The east side of the Great Wall of Fantasyland was taken down this past weekend, revealing the former 20,000 Leagues Under the Sea lagoon.

The long wall across from The Many Adventures of Winnie the Pooh, stretching back to Mickey's Toontown Fair was removed on Friday. On Saturday, the remaining wall between Pooh and Ariel's Grotto came down.

A small fence surrounds an area across from The Many Adventures of Winnie the Pooh that is still being prepared for future use.

In addition, the north (castle) side and east (Tomorrowland) side construction walls at the hub have come down, which has allowed the Magic Kingdom parades to resume their normal route. The Partners statue of Walt Disney and Mickey is again visible and available for photo backgrounds in front of Cinderella Castle.

The small bronze statues that circled the hub are gone, though they're reportedly going to return at some point. It also appears that the planters have decreased in size as well the fact that they're now at ground level instead of elevated. The remainder of the hub reconstruction project will be completed in early March.

To help promote the DVD release of Bambi on March 1 , guests have the rare opportunity to meet and greet a walk-around Thumper character in Disney's Animal Kingdom's Palm Courtyard.

The Bambi theming of the area includes topiaries of Bambi and friends, area background music from the movie and opportunities to meet live “forest animals.”

The whole thing only runs through March 31, because the Bambi topiaries are moving during the following two weeks to Epcot's Canada pavillion for the International Flower and Garden Festival.

In another instance of interpersonal interaction being lost in the name of speed and efficiency, automated touch-screen ticket kiosks are now operational at the Transportation and Ticket Center. This should shorten the lines at the ticket booths, and possibly allow them to tear some of them down, since they're never all open at the same time, anyway.

Automated ticket machines have been tested at the water parks for the last couple of years. Look for the machines to be available at the other three Walt Disney World theme parks in the near future.

The new Crush 'n' Gusher water coaster at Typhoon Lagoon is opening for cast member previews on March 9 and 12. Cast members and their families can check out the attraction between 10 a.m. and 4 p.m. on those dates (though the rest of the park will not be open). The attraction opens to the public when the water park reopens from its annual refurbishment on March 13.

There are two new books by Jason Surrell and a new Web site coming for fans of Pirates of the Caribbean. The first book, Pirates of the Caribbean: From the Magic Kingdom to the Movies, is due this fall, while a book about the making of the eventual trilogy of movies is being released in 2007, just before the third movie hits the screens. We have obtained a copy of the cover art for the first book, below. 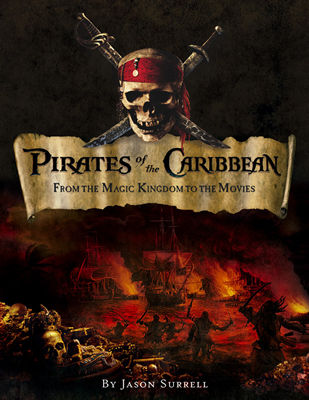 Pirates of the Caribbean: From the Magic Kingdom to the Movies by Jason Surrell is due in book stores this fall.

In addition, the official fan site for the Pirates of the Caribbean movies is nearing launch. You can see the preview page here.

New menus are coming when two quick-service eateries reopen in the coming weeks.

At the Magic Kingdom, the Tomorrowland Terrace returns from refurbishment as the Tomorrowland Terrace Noodle Station, featuring chicken, shrimp and vegetarian noodle bowls, as well as pork steamed buns with Asian slaw, stir fry, fried egg rolls and pot stickers. Salads are also being offered, including mandarin orange and cashew chicken. A ginger-infused creme brulee will be the specialty dessert.

In the courtyard in front of the new Lights, Motors, Action Extreme Stunt Show at the Disney-MGM Studios, the Studio Catering Company is relaunching with a Mediterranean flavor featuring flatbread sandwiches, including cumin-spiced lamb kefta with baba ghanoush and harissa sauce, tandoori chicken with tomato and cucumber raita, and a steak “gyro”-style sandwich with roasted red pepper hummus and tomato and onion relish. Children will be able to get a grilled chicken wrap with lettuce and cream cheese or a chilled smoked ham wrap. Dessert includes seasonal fruit tarts, lemon curd in a meringue shell, and panna cotta with strawberries.

It's that time again. Information about the Epcot International Flower & Garden Festival has been announced, and we'll run down the highlights for you.

First of all, the topiary characters at the entrance will have a new look, as Mickey and friends welcome you with a salute to the Happiest Celebration on Earth. The spiral Tinker Bell is no longer in front of Spaceship Earth, as Miss Bell has moved to World Showcase Plaza.

Once again, the festival will have themes for each weekend. This year, the schedule is as follows:

Also new this year, “Farmer Mickey's Maze” (aimed at children ages 2 to 5) replaces last year's “Disney's Doggone Maze” along the Imagination walkway. Also, with the reopening of The Land pavilion, the “Behind the Seeds” Greenhouse Tour has returned. Also, the Living with the Land boat ride will feature 50-pound melons and huge pumpkins, as well as the first tomato trees grown in the U.S.A. Also new this year is Minnie's Magnificent Butterfly Garden, adjacent to MouseGear and Innoventions East.

The Flower Power Concert Series again features popular acts from the past. Most of the groups are returnees from last year:

Hidden Mickeys have also been added to the decor. Fifty of them were created especially for the Festival this year.

The Great American Gardeners series has returned, as well. Each weekend in Innoventions West, well-known gardeners will give seminars at 11 a.m. and 2 p.m. This year's lineup:

And, of course, all of the favorites are back, from the ladybug release to the backyeard gardens display to sculpture, dooryard and water gardens.

Hi, I'm Steve, and I'll be your Disney tour guide here in… Wyoming?

The Walt Disney Company has decided to trade on its reputation for customer service (no comments from the peanut gallery) and start organizing tours away from the parks, resorts and cruise lines. This summer, Disney is running 15 week-long test tours for groups of 30–35 in Wyoming and Hawai`i.

The new business, titled “Adventures by Disney,” is recruiting families aboard Disney Cruise Line ships, at the World of Disney store in New York, and at other locations. The trial tours are offered at a discount price of $5,600–$7,800 for a family of four, not including airfare to and from the tour's end points. Travel during the tour is included in the cost.

The “Quest for the West” tour visits the Grand Tetons, Jackson Hole and Yellowstone National Park, while the “Escape to Paradise” tour will stop on O`ahu, Kauai and the Big Island of Hawai`i.

The hotels of the Hong Kong Disneyland Resort are now taking reservations. The two hotels combined only have 1,000 rooms, so they may go fast. Rooms at the Victorian-themed Hong Kong Disneyland Hotel, with 400 rooms, start at the equivalent of about US$205 per night, while the 600 rooms at the Art Deco Disney's Hollywood Hotel start at approximately US$128 per night.

…The reopening of The Land pavilion has been pushed back from April 1 to April 6. Passholder and Disney's Vacation Club preview days are still unchanged on April 15–17; however, the delay shortens the window for cast previews, which are slated for the first part of the month.

…The Astro Orbitor returns from refurbishment well ahead of schedule and is opening for guests on Febuary 26.

…According to D-Troops.com (link), there are reports that Disney-MGM Studios management has reversed course and is allowing Disney artists to continue teaching guests at the Magic of Disney Animation attraction. If you were one of those who wrote to Disney asking them not to replace the artists with non-artist cast members traclng the characters, it might be nice to send them a thank-you note.

…WDWMagic (link) reports that the Mouse House at Pleasure Island closed last Tuesday, and is being replaced with a new Harley Davidson retail store, which is expected to open in late March 2005. The store is featuring several custom bikes in addition to standard merchandise.

…It appears that the construction of the monorail board/exit gates at the Magic Kingdom station is causing some confusion and traffic jams. Here's hoping that they get all of the work finished before Spring Break hits and the crowds swell.

…Disney is planning to build another ship for the Disney Cruise Line, but is not moving forward until the currency exchange rate becomes a little more favorable.

Discounts for early 2005 are out

Resort discounts valid through April 16, 2005 have been announced. Room-only and Magic Your Way packages are available. See the Walt Disney World web site (link) or MouseSavers (link) for more information.

Radisson Resort Parkway, a MousePlanet sponsor, has announced their rates through the end of 2005.

The entire price structure has changed as of January 2 to the new "Magic Your Way" passes. Advance purchase discounts are only available on tickets above the base ticket of at least 5 days.

Hours and entertainment schedules are currently available through April 2005.

Hours and entertainment schedules are currently available through April 2005.