The next time you walk through the lobby of a Disney resort in the middle of the night, those people cleaning the floor won't be Disney cast members. In a move that Disney said would improve efficiency and cost-effectiveness, all third-shift custodial positions at the resorts will be outsourced effective October 1, with the existing third-shift workers redeployed to other positions.

Disney said that the private services that will be contracted to take over the work will maintain the high standards set by the cast members. The displaced cast members will be offered positions that will carry the same base pay rate.

It is uncertain whether this move is aimed at cutting more positions from the internal payroll, finding more bodies to fill the understaffed positions during the day shift, or both.

The third-shift custodial cast members are represented by UNITE HERE Local 362. Local 362 president Morty Miller has stated that he believes that the move violates the existing labor contract and he intends to challenge it, perhaps filing an unfair labor practice charge. He stated that this is the first time that Disney has outsourced union-represented positions in over a decade. (The information technology positions outsourced earlier this year were non-union jobs.)

Local 362 UNITE HERE, which represents about 5,000 full- and part-time custodial, attractions and vacation planning workers, held an emergency meeting of third-shift resorts custodial workers on Saturday morning. At press time, no results of the meeting had been made public.

We'll take a closer look at the trend of outsourcing jobs at Disney, from custodial to animators to Imagineers, in an upcoming article. 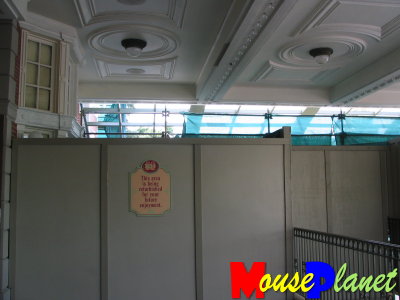 A construction wall blocks off a portion of Main Street Station while it's under refurbishment. Photo by Brian Bennett.

Hurricane (then Tropical Storm) Ophelia caused a change in plans for the Disney Cruise Line last week. Due to the storm's proximity to the Florida coast, the Disney Wonder docked at Port Everlades in Fort Lauderdale instead of its home base of Port Canaveral last Thursday. Disney attempted to modify travel arrangement for as many passengers as possible that were both embarking and debarking at Port Everglades. Those passengers who were not able to reroute their inbound flights to Fort Lauderdale were being bused from Port Canaveral to Port Everglades. Returning cruisers that could not be rerouted were bused from Port Everglades back to Port Canaveral.

Conditions were more stable by the weekend, and the Disney Magic docked at Port Canaveral on Saturday, while the Disney Wonder did the same on Sunday. However, with Ophelia still circling out in the Atlantic off the Florida coast (landfall is predicted for tomorrow), more rescheduling may be necessary this week.

Disney has released a short description of the Expedition: Everest attraction scheduled to debut next year.

In Expedition Everest, guests board an old mountain railway destined for the foot of Mount Everest. The train rolls through thick bamboo forests, past thundering waterfalls, along shimmering glacier fields and climbs higher and higher through the snow-capped peaks.

But suddenly the track ends in a gnarled mass of twisted metal and the thrills intensify as the train races both forward and backward through mountain caverns and icy canyons and guests head for an inevitable face-to-muzzle showdown with the mysterious yeti (known to some as the abominable snowman).

The attraction, expected to be offering previews as early as February with an expected official opening on April 22 (but don't plan your vacation around those dates), will have a 44-inch height requirement. 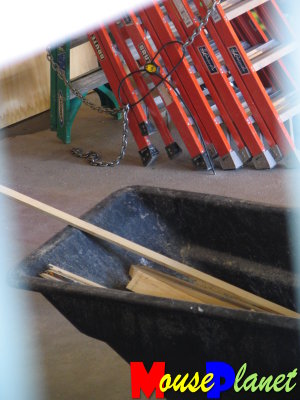 Despite the fact that they're behind the Main Street Station refurbishment wall, ladders are chained together. Photo by Brian Bennett.

Looking for a really all-inclusive vacation package with literally all of the frills? Disney has introduced a fourth level of the Magic Your Way (MYW) package for next year. Joining the standard MYW, MYW Plus Dining and MYW Premium packages is the new MYW Platinum Package.

This package includes just about anything that you can think of to do at Walt Disney World, similar to the "Gold Key" plan offered 15-20 years ago. The package includes accommodations at a deluxe resort; MYW tickets with Park Hopper option and Water Park Fun & More option; the complete dining package (including Victoria & Albert's); unlimited access to recreational activities including golf, miniature golf, water sports, parasailing, horseback riding and fishing; reserved seating at Fantasmic; a fireworks cruise (your choice of Wishes or Illuminations); a spa treatment; unlimited access to theme park tours (including DiveQuest and the Aqua Tour); category 2 seats for Cirque du Soleil; unlimited access to kids clubs or in-room child care; personalized itinerary planning; unlimited access to Grand Gathering experiences (if your party is at least 8 people) and a special keepsake.

Basically, if you get this package, there's pretty much nothing else that you'll be spending money on, except for souvenirs.

Disney's "Intimate Weddings"—a package designed for just the couple and a small group of guests—has added a sixth available location to its portfolio. You can now tie the knot at the Asante Terrace at the Animal Kingdom Lodge, overlooking Arusha Savannah. Intimate Weddings can accommodate up to 20 guests. This location joins the other five existing locations: Sunset Pointe at the Polynesian Resort, the Wedding Pavilion, the Wedding Gazebo at the Yacht Club Resort, Sea Breeze Point at the BoardWalk Resort and Sunrise Terrace at the Wilderness Lodge. 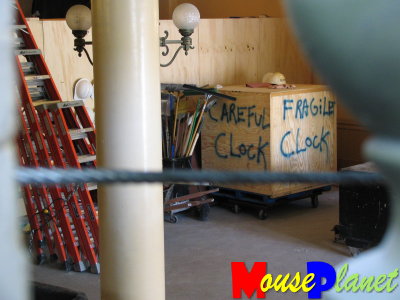 The clock for Main Street Station is safely packed away in a crate, awaiting its reinstallation. Photo by Brian Bennett.

If you've been sitting back and waiting to decide whether or not to sign up for the Walt Disney World Marathon or Half Marathon, time has run out. Both events are now full, selling out all 13,000 spaces in each. Over 700 athletes have signed up for the "Goofy's Race and a Half Challenge" by registering for both races. If you are not signed up and still want to participate in the weekend, you can still sign up for the Family Fun Run 5K race or volunteer to help out at the event. For more information about the Walt Disney World Marathon, you might want to check out Lani Teshima's WDW Marathon Guide here on MousePlanet (link).

Disney has revealed some of the details of the makeover that begins next month at the World of Disney store in Downtown Disney. Three new rooms being created are the Bibbiddi Bobbiddi Boutique, the Princess Room and the Adventure Room.

By request, some alternate supermarket locations

Following our note last month (link) that the Winn-Dixie supermarkets at the Hunter's Creek Shopping Center and the SouthChase shopping center would be closing, we received email from folks who stopped at one of those particular locations on each trip to Walt Disney World asking where there might be other supermarkets along the route from the Orlando International Airport to the Disney resort along the Greeneway (SR-417).

As a public service to them and anyone else who might be wondering, we've located a few supermarkets in that area. Publix has a three locations conveniently located to the Greeneway:

Winn-Dixie doesn't appear to have anything in the immediate vicinity of the Greeneway anymore, but there appear to be a couple of locations (link) somewhat convenient to an endpoint at Walt Disney World. The location at the Shoppes of Lake Avenue is a short drive north up SR-535 from Hotel Plaza Boulevard, while the location at Gooding's Formosa is along SR-192 west of World Drive.

Gooding's has locations (link) at Crossroads Plaza at the intersection of Hotel Plaza Boulevard and SR-535 and in downtown Celebration.

There are also Super Targets, Super WalMarts and warehouse clubs in the area.

DVC to get into the Halloween spirit

Disney Vacation Club resorts will feature special Halloween celebrations this year. A special Halloween evening event will be held at the BoardWalk Resort from 5:30-8:30 p.m., with music, characters, trick-or-treating and other activities. The Saratoga Springs Resort will host a Halloween pool party, featuring trick-or-treating, a mummy-wrapping contest and an outdoor Halloween movie. There will be a whole week worth of activities at Old Key West Resort, where daily Halloween crafts projects help count down to Halloween events including pumpkin decorating, costume contests and a pool party. The other DVC resorts (including the Hilton Head Island and Vero Beach Resorts) will also be joining in the fun, as well. So if you're a DVC member who will be visiting on Halloween but not going to Mickey's Not-So-Scary Halloween Party, keep your eye out for special events at your resort!

…We're hearing a rumor that the new "Club Cool" will have cans of the various international beverages for sale. If this is true, parties around the country may start featuring cans of Beverly loosed on unsuspecting guests. Frozen Coca-Cola beverages may also be available in the refurbished and rethemed location.

…Disney Vacation Club Member-exclusive champagne brunches will take place at the Grand Floridian on select Sundays in late October and early November during the Food & Wine Festival. More information will be available soon on the DVC Members-only site.

…Oddly, November park hours have still not been published on the Walt Disney World web site at press time.

…For those waiting for an announcement, we have heard a rumor that there will be no 999 Happy Haunts Ball event this year.

…During Friday night's national telethon to raise money for victims of Hurricane Katrina, nearly 2,000 Disney employees manned the phone lines. A portion of all calls nationally were routed directly into the Disney call centers in Orlando and Tampa. The money raised Friday will go to the American Red Cross and the Salvation Army to fund hurricane relief efforts.

…Walk-around face characters of Kim Possible and Ron Stoppable are being tested at the Disney-MGM Studios.

…Disney has announced the dates for the 13th annual Epcot International Flower & Garden Festival. The event will run from April 21 through June 11

Passholder rates are out

Annual Passholder and Florida Resident discounts have been released for August 28 through October 4, with rates starting at $59 per night for value resorts and $89 per night for moderate resorts. The discount code to use is EXI. See the Passholder web site (link) or MouseSavers (link) for more information. The Passholder Best Rate program has reduced the advance reservation requirement from 120 days to 60 days. The program is now accepting reservations, online only, through February 15, 2006.

The Radisson Resort Parkway, a MousePlanet sponsor, is offering a $59.95 reduced special rate valid through September 30. Please note that this special does not include a free upgrade to deluxe pool view accommodations.

Radisson Resort Parkway rates through the end of 2005

Radisson Resort Parkway, a MousePlanet sponsor, has announced their rates through the end of 2005.

Summer Price Slice is back with reduced-price greens fees on tee times after 10 a.m. daily from May 2 through Sept. 29 on Disney's five 18-hole golf courses.

The entire ticket price structure changed as of January 2, 2005, to the new “Magic Your Way” passes. Advance purchase discounts are only available on tickets above the base ticket of at least 5 days.