In a 911 call from a ride worker, she was described as conscious but had lost color in her face and "she seems pretty bad." An ambulance was on site within 12 minutes and she arrived at Florida Hospital Celebration Health 45 minutes from the start of the 911 call. Blmel died about 24 hours from her arrival at the hospital.

Disney officials shut the ride down late Wednesday after they were advised of her condition. After a full inspection that night, conducted in conjunction of the Florida Bureau of Fair Rides Inspection, the ride reopened with the rest of the park on Thursday morning. Disney, like the other mega-theme park operators in the state, is responsible for its own ride safety with no official state oversight; however, they recently have invited the state's Bureau of Fair Rides Inspection to look over rides after major incidents.

After an autopsy on Friday, Orange-Osceola County Chief Medical Examiner Dr. Jan Garavaglia indicated in a statement that there were no signs of trauma, and that there was a "hypertensive bleed within the brain," showing that Blmel had "severe, long standing high blood pressure."

In a statement late Wednesday, Walt Disney World indicated that the attraction had been shut down pending an inspection, "first and foremost, our concern is for the Guest's family. We offer them our deepest sympathies and assistance during this difficult time."

Join the ongoing discussion of this topic on our MousePad discussion forums here.

A recall was announced last week for the battery packs that came with about 102,000 Disney-branded DVD players sold between April 2005 and March 2006 in the Disney theme parks, through the Disney Catalog and DisneyShopping.com and at discount and electronics stores nationwide. The DVD players, which come in five themes—Princess, Fairy Flowers, Mickey Classic, Mickey Mouse and Power Rangers—are about 6.5 inches by 5.5 inches and have a 3-inch display, and were recalled because the battery packs sold with the players can overheat and possibly burst when recharging, posing a risk of burns.

The battery packs included with these DVD players were voluntarily recalled by the manufacturer due to a burn hazard.

Those with the DVD players should stop using the battery pack supplied with the players immediately and contact the manufacturer for a replacement rechargeable battery pack. The manufacturer, Memcorp Inc. of Weston, Fla., can be reached by phone at 800-326-0315 between 8:30 a.m. – 8:00 p.m. ET weekdays and 8:30 a.m. – 5:30 p.m. ET Saturdays ; an online form is also available at their web site (link).

"We'll see your globe and raise you three"

In an effort to keep visitors at Universal Studios later into the evening (and apparently to compete with Epcot's Illuminations: Reflections of Earth), the park will be introducing a nighttime show on the park's lagoon that will feature four three-story globes serving as screens for scenes from Universal Pictures films. According to a story in the Orlando Sentinel (link), "Universal 360: A Cinesphere Spectacular" will start July 1 and will feature fireworks, lasers and a 300-speaker sound system in addition to the globes.

Universal will also debut a new attraction at Islands of Adventure, as the Sylvester McMonkey McBean's Very Unusual Driving Machines (which was originally built for the park's grand opening seven years ago) will finally open after being redesigned and rethemed under the new name The High in the Sky Seuss Trolley Train Ride, or the Seuss Sky Trolley for short. The attraction, aimed at smal children, is set to open June 1.

This schedule is for this year only, and its success will be reevaluate when before planning begins for MouseFest 2007. Individual meets have not yet been scheduled, and that information will start to become available over the summer. In the meantime, please visit our MouseFest planning thread on our discussion forums (link), where we will be looking for your input on what sort of meets you'd like to see us hold this year.

Disney stamps to be unveiled at Flower & Garden Festival opening

The first day of issue of the new 39-cent Art of Disney: Romance stamps will take place at the opening of the Epcot International Flower & Garden Festival. The ceremony will be presided over by Jo Ann Feindt, Vice President of Great Lakes Area Operations for the U.S. Postal Service, Walt Disney World President (and President of Worldwide Operations for Disney Park & Resorts) Al Weiss and Brad Rex, Vice President of Epcot. The ceremony will also be attended by the characters appearing on this year's stamps, Cinderella and Prince Charming, Belle and the Beast, Lady and the Tramp and – of course – Minnie Mouse and Mickey Mouse. 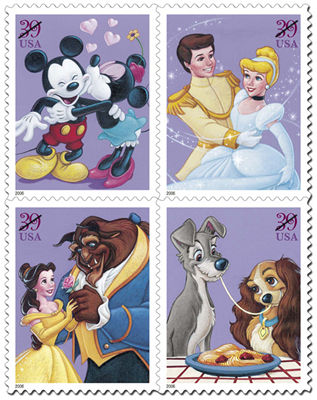 The new Art of Disney: Romance stamps will be officially released at the opening of the Epcot Flower & Garden Festival. Image © U.S. Postal Service.

This year, the stamps will also be recreated in larger-than-life topiaries. The 7-foot displays will be unveiled live on stage in an elaborate ceremony directly behind Spaceship Earth, in Innoventions Plaza. Festivities begin at 9:30 a.m. on April 21.

Last Tuesday night, the Walt Disney Parks & Resorts division of the Walt Disney Company gave a presentation at the 6th Annual Global Travel and Tourism Summit to offer a vision of technology's impact on travel and tourism. Among the technologies touted were a video-on-demand channel for Comcast cable customers, original concert footage of shows recorded at Walt Disney World being broadcast on Comcast, Virtual Magic Kingdom, podcasts from both domestic resorts, Buzz Lightyear Online at the Disneyland Resort and Pal Mickey at Walt Disney World.

Jay Rasulo, Chairman of Disney Parks & Resorts, said "We're at the dawn of a whole new era, and increasingly sophisticated mobile devices will usher in an entirely new kind of vacation experience. Wherever you might be, you'll be able to plan out every last detail of your vacation—hotel and restaurant reservations, park tickets, perhaps even choice of menus—right from the handset."

"As travel barriers melt away, those who market an ever- increasing list of destinations around the world will use sophisticated technologies like these to make vacation experiences more convenient and more rewarding," Rasulo continued. "Like Walt Disney himself, we aim to take full advantage of the new technology opportunities available to us to enhance our storytelling and the overall Disney vacation experience in every way possible."

At the event, Disney announced a $1 million donation to UNICEF to aid the organization in child protection, immunization, early childhood support, fighting HIV/AIDS and girls' education around the globe. As Disney's relationship with the United Nations-run group goes back to construction of the "it's a small world" attraction for the organization, the presentation of the donation was highlighted by a performance of the attraction's theme song by Disney ambassador Julie Andrews and the World Children's Choir, made up of children from backgrounds spanning the globe.

I've decided to finally get off of my fat butt and do a public, fitness-related activity. It took a fund-raising event to do it. On April 30, I am participating in the March of Dimes WalkAmerica event. I'm walking three miles and hoping to raise a bunch of money for a good cause. The cause is very personal to me, because it was therapies funded and developed by the March of Dimes that enabled my son to survive after he was born twelve weeks prematurely.

I'm really not good at asking for things, because I don't like to do it, but I'd really like to ask you to consider giving what you can to this worthy cause. Please go to my fundraising page at for more information or to donate. We raised a good bit of money from readers last week, and I'd like to continue the trend. Thanks in advance for your consideration!

Don't forget the other fundraisers in the Disney Internet community, Deb Wills (of AllEarsNet.com) for the Avon Foundation Walk for Breast Cancer (link) and Lou Mongello (of DisneyWorldTrivia.com) for the Starlight Starbright Foundation (link).

…El Pirata y El Perico Restaurante was open for Easter crowds, though it apparently didn't pull in a proportionally large number of patrons compared to other locations. One new twist that they put into place for this period was that, with the tacos and taco salad, you are given the shell and meat at the counter, and you fill in the rest at a fixings bar. This change got a thumbs-up from those that sent in this information.

…Rumors have started circling the Internet regarding a possible Monsters, Inc.-themed attraction for the former home of The Timekeeper. The attraction is reportedly called The Laugh Floor. No further information (including whether or not this rumor is accurate) is available at this time.

…Last week, I mentioned that it appeared that Pleasure Island would be opening a new stage in the plaza area that they're creating by the old Hub Stage, because Stormbringer was scheduled to perform on something called the 'Water Front Stage." I now stand corrected. The Water Front Stage is apparently a little-used stage between the parking lot and the rear of Mannequins and 8-Trax. In fact, demolition in the Hub area is apparently going much more slowly and is nowhere near done. Thanks to MousePlanet readers Bill and Alan, who both sent me corrections on this.

…Vehicles modified to look like Lightning McQueen and Mater the tow truck from the upcoming Disney/Pixar movie Cars will be joining the Stars and Motor Cars parade at the Disney-MGM Studios on April 28.

What is the highest point inside any of the Disney theme parks?

(Answer will be posted next week.)

Answer to last week's question: The chemical formulas on the pipes running through the queue area of the Dinosaur attraction represent the formulas for ketchup (red pipes), mustard (yellow pipes) and mayonnaise (white pipes). The attraction is, after all, sponsored by McDonald's.

Free dining plan back, for a limited time

Perhaps the best-received package in recent Disney history, the "Stay, Play and Dine" free dining plan is back. Packages purchased by June 4 for stays from August 13 – September 30 will receive the Disney Dining Plan for free. Essentially, it's the Magic Your Way Plus Dining package for the price of a standard Magic Your Way package. That's a savings of $37.99 per night per adult (ages 10 and up) and $10.99 per night for children (ages 3-9). Add it up and a family of four with kids ages 3-9 will save $97.96 per night, and a family of four with kids over age 9 will save a whopping $151.96 per night.

Disney Visa cardholders can use request code YWL when booking, while the general public should use code YWX.

Passholders discounts are now available on the passholder web site for vacations from April 23 through June 3. When calling by phone, use booking code EZN or EZO. Florida resident discounts for the same dates are available on the resident web site, using booking code BOR. Passholder rates start at $74 per night for value resorts, resident rates start at $79 per night for the values.

Radisson Resort Orlando-Celebration releases rates through the end of 2006

The Radisson Resort Parkway is now the Radisson Resort Orlando-Celebration! The resort, a MousePlanet sponsor, has announced their standard rates through the end of 2006. Note that the nightly rates do not include a $7 per night resort fee.

Walt Disney World's entire ticket price structure changed as of January 2, 2005, to the new “Magic Your Way” passes, and prices increased on January 1, 2006.. Advance purchase discounts are only available on tickets above the base ticket of at least 4 days, with higher discounts on those tickets with both options.

Hours and entertainment schedules are currently available through October 2006.

Hours and entertainment schedules are currently available through October 2006.