[Ed. note: I'm just back from MouseFest. Due to the press of the many MouseFest activities demanding attention, the Park Update is a bit truncated and a day late this week. To make up for that, we'll give you a World Tour of the Holiday storytellers around Epcot's World Showcase, courtesy of MousePlanet reader Cathy Sowa. We'll be back to our normal selves next week.] 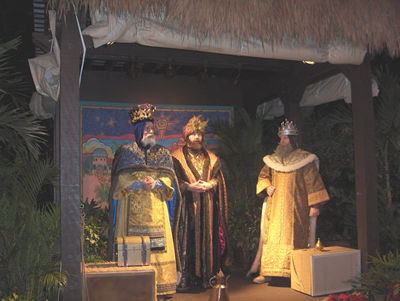 The Three Kings share the celebration of the Posada at the Mexico pavilion. Photo by Cathy Sowa.

Get the good news from Mickey

Now you can have Mickey Mouse tell your family that they're going to Walt Disney World with a phone call on Christmas Day. If you book a Walt Disney World vacation by December 23, you can sign up to have Mickey deliver the news. Once you have your reservation number for your 2007 vacation, go to MickeyHolidayCall.com to set it up.

You can choose from a Merry Christmas or Happy Holidays greeting. You'll also need to provide your birthdate and a phone number to call on December 25, as well as your reservation number, to schedule the call. The call will be made between 9 a.m. and 3 p.m., so make sure that you put in a number that you can be reached at during that time.

Special vacation package pricing is available for some dates by going to disneyworld.com/gift. 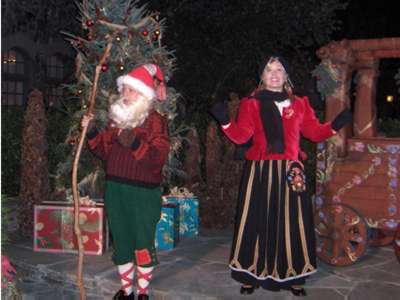 Sigrid tells the story of Julenissen at the Norway pavilion. Photo by Cathy Sowa.

Stick MousePlanet in your ear!

MousePlanet's big announcement at MouseFest this year was the upcoming debut of the (yet-to-be-named) MousePlanet podcast. Some of you may remember my small note a few months back that I was starting a podcast with a friend as a side project. Well, we're putting that project aside in order to put together a new podcast right here at MousePlanet. The targeted debut date is January 4, 2007, but we're not promising that date yet. We've got a few final episodes to put together for the Magical Moment Podcast (link) while we try to fine-tune a format for the new show. We'll fill you in with more details as the debut approaches. 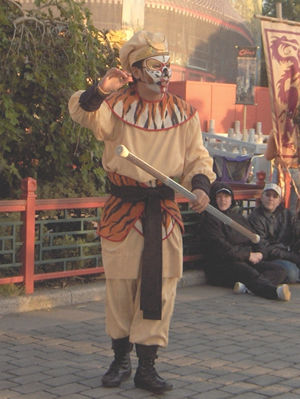 The Monkey King tells his tale at the China pavilion. Photo by Cathy Sowa.

A rally was held at the entrance to Disney property by the Crossroads shopping plaza by members of the Service Trades Council Union, the umbrella organization consisting of six of the major unions that represents almost half of Walt Disney World's 59,000 employees. The rally is to protest the contracting out of custodial, valet, bellhop, baggage handler, rigger and video tech jobs to outside companies, displacing Disney employees. Nearly 600 jobs have been cut in the last year.

The companies taking on the tasks tout that they can do the same job better—while paying lower wages—because the cleaning or baggage jobs are all they do and they don't have to take time to handle guest issues. The Disney employees who are being displaced to other jobs and shifts note that it is the fact that they did provide guest services that made the Disney experience special, and that now that third parties are doing those jobs, guests won't be able to count on having their issues resolved by any worker at the resorts.

The rally came on the heels of a complaint filed on November 30 by the National Labor Relations Board, alleging that Disney violated labor laws in contracting out the overnight custodial positions at the resorts. The NLRB claims that Disney did not give proper notice or bargain with UNITE HERE! Local 362 regarding the effect of the change on the employees before changing working conditions for 185 workers. Disney, who was given a chance to settle before the complaint was filed, claims that they fully complied with the labor agreement The company has until December 14 to respond to the complaint. A hearing will be held in February. 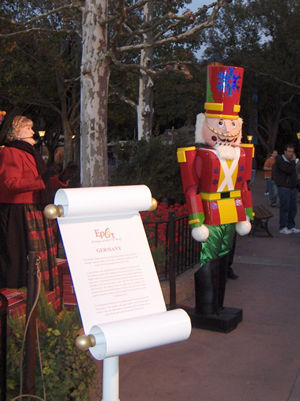 The German storyteller relates the tale of the Nutcracker. Photo by Cathy Sowa.

A big change has been made at the Once Upon a Toy store at Downtown Disney Marketplace. The large monorail display in the central section of the store has disappeared, and has been replaced by a Build Your Own Lightsaber display. The nine-step process (concluding with directions to take your creation to the cash register to buy it) allows guests to choose each part of their lightsaber separately, from the blade (or blades, for a Darth Maul-type device) to the color filter for the blade to glow (red, green, purple, etc.), handle enhancements, and so on.

The display is two-sided, allowing more guests to build toys simultaneously, moving from one end to the other as they follow the directions. Some of the steps are somewhat involved, but the process still appears to be easy to complete. The toy costs $19.95, regardless of what combination of parts is selected, including double-bladed Darth Maul-style light saber. Guests bring their creations to the counter and tell the cashiers whether they have created a "good" saber or a "bad" saber. The cashiers then give the guest an exclusive Jedi or Sith pin to match the saber, and will also provide batteries for the toy.

The displaced monorail toys are now off on the side, and appear to be in sell-off mode. (No discounts, though.) 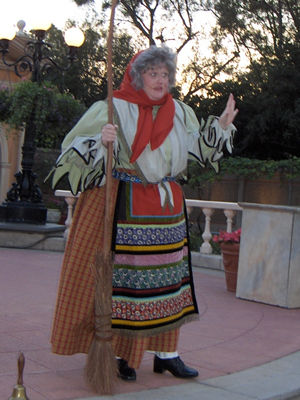 La Befana tells the story of the Epiphany at the Italy pavilion. Photo by Cathy Sowa.

Construction on Pleasure Island at Downtown Disney is almost done, and admission changes are coming soon. Effective January 1, all dance clubs on the Island will only admit those ages 21 and over. The days of 18-and-up on Sunday through Thursday night are over. The Adventurer's Club and the Comedy Warehouse will continue to admit underage children, though those under 18 will require parental supervision. 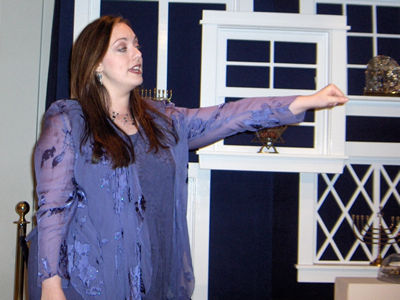 At the American Adventure, a storyteller relates the story of the Maccabees. The pavilion also features a Kwanzaa storyteller and a chance to meet Santa Claus. Photo by Cathy Sowa. 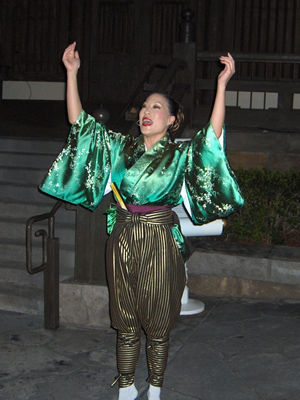 The Daruma Vendor tells the tale of the Daruma doll at the Japan pavilion.. Photo by Cathy Sowa. 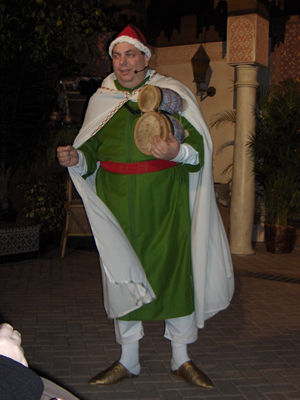 At the Morocco pavilion, the Taarji tells of the Festival of Ashura.. Photo by Cathy Sowa.

…There was apparently a mix-up with the new plan for booking the Disney Vacation Club member cruise. DVC had to call many people on the morning of December 2 (the early window booking day) and during the following week to tell them that they had been supposed to get a call for round 1 of the member cruise, but had not by mistake, and asking whether they wanted to book the cruise. 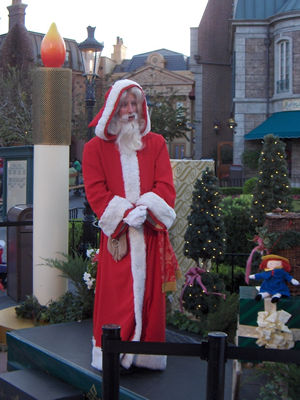 …While the valet services at deluxe resorts and luggage services across property are being contracted out, the transition will be closely watched by Disney managers who will oversee the process. The close scrutiny is expected to last through April, at which time the BAGS employees will completely run the service.

…According to the Orlando Business Journal, the Burnham Institute for Medical Research will be signing on for a 10-year exhibit at Epcot's Innoventions pavilion as part of its deal to build a new research lab in central Florida.

Father Christmas tells tales of Christmas past at the United Kingdom pavilion. Photo by Cathy Sowa. 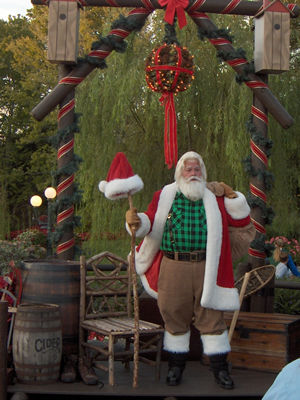 This week's question: Who or what pops out of the teapot at the center of the Mad Tea Party? Stay tuned to next week's park update for the answer.

The answer to last week's question: "How many attractions were opened in the Magic Kingdom on opening day, October 1, 1971?" is:

The Magic Your Way deals include free Park Hopper and Water Park Fun & More options added to your tickets and are valid from January 1 through March 8, with possible blackout dates for the Martin Luther King, Jr. Day holiday weekend. You must book this rate by December 16. No other discounts apply. To book the package, call Disney directly or your travel agent (Small World Vacations is MousePlanet's preferred travel agency) and request booking code ZCK (standard Magic Your Way package) or ZCL (Magic Your Way Plus Dining).

Room-only discounts are available for Annual Passholders and Florida residents from January 1 through February 14. Discounts are $23 off per night at Value resorts, $46 per night at Moderate resorts and $80 per night at Deluxe and Disney Vacation Club resorts. These rates can be booked up to the night of arrival, depending on availability. Discounts are priced off of rack rate. To book the rates, call Disney directly or your travel agent (Small World Vacations is MousePlanet's preferred travel agency) and request booking code FCC (Passholders) or BRL (Florida residents).

Thanks to MousePlanet sponsors Small World Vacations and MouseSavers for this information.

Annual passholder rates have been announced for October 1 through December 23. Of course, there will be no AP rates during peak Christmas Week dates of December 24-31. The rates very by season (the period covered spans regular, value and holiday seasons), but they'll give you approximately $20 off per night at Value resorts, $40 off per night at Moderates, and $71-$80 per night at Deluxe resorts. The booking code for these rates is FBZ. (The passholder Web site says FCB, so I would guess that both would work.)

Florida Residents have their own discounts, using booking code FBY. Availability dates are October 5 through December 23, and rates are $5 more than the AP rates.

Both of these rates can be booked up until December 23.

Walt Disney World has announced a new discounted offer for residents of Canada. The deal, available most nights from January 1–11 and January 15 – February 14, offers free Park Hopper and Water Park Fun & More options with purchase of a package. Prices start at US$377 per adult, double occupancy, at Disney value resorts. No other discounts apply. Use booking code ZCV for this offer. Reservations prior to November 2 require a Canadian address, which seems to point to this offer being expanded to U.S. visitors after that date. Packages must be booked by December 16.

Radisson Resort Orlando-Celebration rates through the end of 2006

The Radisson Resort Parkway is now the Radisson Resort Orlando-Celebration! The resort, a MousePlanet sponsor, has announced their standard rates through the end of 2006. Note that the nightly rates do not include a $7 per night resort fee.

Walt Disney World's entire ticket price structure changed as of January 2, 2005, to the new “Magic Your Way” passes, and prices increased on January 1, 2006, and again on August 6, 2006. Advance purchase discounts are only available on tickets above the base ticket of at least 4 days, with higher discounts on those tickets with both options. Prices do not include 6.5% Florida sales tax.

Hours and entertainment schedules are currently available through May 2007.

Hours and entertainment schedules are currently available through May 2007.