It appears that the name of the new attraction in the Magic Kingdom's Tomorrowland was too much of a mouthful, as the words "Comedy Club" have been dropped from the end of the name. The attraction is now known as the Monsters, Inc. Laugh Floor. Several people have pointed out that the obvious acronym for Monsters, Inc., Laugh Floor is shared by a sexually oriented phrase originally popularized by the movie American Pie (no, I'm not going to explain it). So we'll be sticking with longer versions of the name here at MousePlanet, even if the abbreviated form would boost our traffic from search engines.

That attraction will be holding a passholder preview this coming weekend, March 30 – April 1, and the blockout has been lifted for the preview dates so that Seasonal Passholders can also attend the special event. The official grand opening will be held next Monday, the same day that the new Gran Fiesta Tour Starring The Three Caballeros opens in the former space of El Rio del Tiempo at Epcot's Mexico pavilion.

Well, time is running out in the Disney Dream Job contest at CareerBuilder.com. There have been over 1 million page views and over half a million votes cast since voting opened on March 6. If you want to view the candidates and make your selection (you can vote as often as you wish), you've only got until this Friday night, March 30, at midnight, Eastern Daylight Time.

There are 20 finalists in each of five categories (Princess-in-Waiting, Pirate, Haunted Mansion Butler or Maid, Jungle Cruise Skipper and Disney Park Parade Performer). Five winners from each cagegory will have the opportunity to actually perform their dream job for a day at Disneyland in June during the grand opening festivities of the Finding Nemo Submarine Voyage.

To view the candidates, go to the contest Web site. If you'd like to know which finalists are MousePlanet readers, check out this thread on our MousePad discussion forums.

Disney Dining Experience members have the opportunity to participate in a unique event on Saturday, April 14. The Boating Party will feature a morning catch-and-release bass fishing excursion, followed by an exclusive Boating Party lunch at the Flying Fish Café prepared by chefs Tim Keating and Anthony De Luca. Sara Brewer of the Chalk Hill Estates winery will present their wines during the lunch. After lunch will be a wine reception and private tour of the Wyland Gallery at the Boardwalk Resort, with each guest receiving a lithograph by nature artist Dana Queen. The event will run from 9 a.m. until 3 p.m. Reservations (at $225 per person) open today. For more information or to make a reservation, call Rosa Flores at 407-560-5703. Don't wait, because there are only 45 spots available.

Another dining event takes place this Saturday, as Artist Point at the Wilderness Lodge will be hosting a wine luncheon. A six-course lunch will be paired with wines from the Kestrel Winery in Washington State. Reservations (at $90 per person) may still be available. For more information and reservations, call Keith Gimbel at 407-824-1642.

As contract negotiations continue with Walt Disney World, a new study has been released by the Service Trades Council Union (STCU), a six-union coalition representing 29,000 of the 57,000 workers at the resort. The report (which you can read in PDF format here), written by three college professors, lambastes Disney for instituting a two-tiered wage system in 1998 for costing employees hired on or after December 13, 1998, $19.4 million last year alone.

The report, however, glosses over the fact that the system of reduced wage increases for new employees was negotiated and agreed to by the unions in that year's contract. An argument can be made that the reductions were forced upon the unions by Disney, as keeping wages down is always a goal in corporate contract negotiations; however, the unions could have certainly fought to avoid the "tiered" system of increases by agreeing to an across-the-board changes. This would have decreased the wage increases for long-time cast members by a lesser degree, but would have allowed all employees to maintain the same schedule of increases.

Now, the STCU wants to gain back parity between its workers by increasing the lowered "tier 2" wage schedule, which they now call "unfair and unexpectedly harsh," to match the original "tier 1" schedule. The cost for that change will almost certainly be less of an increase for long-term cast members, as Disney most likely has in mind an absolute dollar figure of what sort of increase they will agree to.

So what's the probable net result of this? Wages will return to a single-tiered system, with long-timers taking a hit and newcomers doing better. Long-term, the tier 1 cast members, whom the unions were catering to at the time of the 1998 agreement, will have gotten more money from Disney over time, and the tier 2 cast members, who had not yet begun to work for Disney at the time of the agreement, will have increased animosity toward the wage scales after having taken the brunt of the agreed-upon reductions.

In my opinion, the unions must take a big share of the blame for the tiered salary scales, as it was likely in their power to trade the tiered system for smaller reductions across the board (I do not believe that the tier 1 wage schedules were mandated by law). By not wanted to anger their long-term members at the expense of their future members, they cost themselves some degree of goodwill from newer cast members, who have increasingly become the majority as cast member turnover rates continue to climb.

That's not to say that the report doesn't highlight any causes for concern. The next-to-last section of the report indicates how the starting wages paid at Walt Disney World have declined in comparison with its chief competitors, SeaWorld Orlando and Universal Orlando. (It doesn't discuss Disney wages as compared to area fast-food locations.) Disney employee starting wages have been declining compared to the competition since late 1998. That fact, combined with the low level of unemployment in Central Florida, does not bode well for the ability of Disney to fill all of its positions. In fact, it is likely that some of the recent deals to contract out jobs at the resort were to allow Disney to move people into other jobs that they were having trouble filling.

Regardless of how the tiered-pay issue is addressed (and it becomes less and less significant as more of those hired before 1998 leave the company), the overall compensation issue will likely be a major sticking point in this year's negotiations. The two sides are scheduled to meet every Tuesday, Wednesday and Friday between now at the contract's expiration at the end of Saturday, April 28. It will be interesting to see how contract negotiations progress. [Note: The contract currently under negotiation covers the 21,000 full-time STCU employees. The 8,000 part-timers represented by the union are covered under a separate contract that expires on September 29.]

Happy birthday to Disney's Wide World of Sports Complex, which celebrates 10 years on Wednesday. The complex opened on March 28, 1997, with an exhibition game between the Atlanta Braves and the Cincinnati Reds in front of a capacity crowd of 10,000. The Braves have used the complex as their spring training home every year since then. The Braves will actually be out of town on the date of the anniversary, playing the New York Mets in Port St. Lucie.

But baseball is not the only sport played at the complex, with over 30 other sports also sharing the facilities. Football, basketball, paintball, martial arts and even wheelchair rugby. Next weekend will see the fifth anniversary running … er … rolling of the Walt Disney World Inline Marathon. The complex continues to expand, as the Jostens Center – an 80,000-square foot fieldhouse complex – is expected to open in the summer of 2008.

…If you've installed the DisneyLiNK desktop widget, be aware that—even though it says that you can make reservations now for the 2007 Epcot International Food & Wine Festival special events—reservations probably won't open until this summer. We expect that the message will be corrected soon.

…The Enchanted Tiki Room - Under New Management is getting a wait time clock with a rotating number face that will show the range of 2-18 minutes between shows.

…The Walt Disney World Company's "Strive for Five" energy reduction program was named the winner of the second annual Florida Energy Achievement Award for its company-wide program designed to reduce overall energy consumption by 5 percent by involving everyone from management to cast members. The award is presented by the Florida Solar Energy Center (FSEC) to a company, organization or individual that has made a significant achievement in the efficient utilization of energy, energy conservation, energy education or renewable energy in the state of Florida.

This week's question: Where can each of the following water slides be found: Sand Castle Slide, Shipwreck Slide, Rudder Buster, Runoff Rapids, Keister Coaster? Stay tuned to next week's park update for the answer.

The answer to last week's question: "Where at Walt Disney World would you find a sign saying "Warning! Do Not Pull Rope" with the work "Not" crossed out?" is:

Next to the well in front of the Indiana Jones Epic Stunt Spectacular. 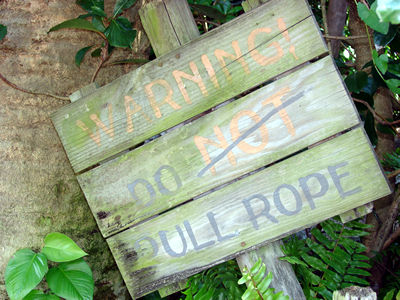 Do you have a trivia question that you'd like to share? If we choose to use your question, we'll give you credit in the Update. Email us here.

Disney has announced room-only discounts for Annual Passholders and Florida Residents for mid-February through the end of March. Room-only discounts are available for Annual Passholders and Florida residents for most night from February 15 through March 30. Discounts are up to $40 off per night at Value resorts, $61 off per night at Moderate resorts and $131 off per night at Deluxe and Disney Vacation Club resorts. These rates can be booked up to the night of arrival, depending on availability. Discounts are priced off of rack rate. To book the rates, call Disney directly or your travel agent (Small World Vacations is MousePlanet's preferred travel agency) and request booking code FCR (Passholders) or FCT (Florida residents).

From January 1 through March 31 of this year, Annual Passholders and Florida residents can purchase a multi-club Pleasure Island ticket for the regular price of $21.95 (plus tax) and get unlimited visits through June 30. Guests must be over 21 years of age to purchase the tickets, and proof of age, proof of an annual pass or Florida residency, and a valid photo ID are required at the Pleasure Island box office when purchasing a ticket or redeeming a certificate from an online purchase. The offer cannot be combined with other discounts or offers, and is not valid for single-club tickets. Guests must be 21 years of age to enter any of the dance clubs (basically anything other than the Adventurer's Club and the Comedy Warehouse), and must show proof of age at the time of entry.

Walt Disney World's entire ticket price structure changed as of January 2, 2005, to the new “Magic Your Way” passes, and prices increased on January 1, 2006, and again on August 6, 2006. Advance purchase discounts are only available on tickets above the base ticket of at least 4 days, with higher discounts on those tickets with both options. Prices do not include 6.5% Florida sales tax.

Hours and entertainment schedules are currently available through September 2007.

Hours and entertainment schedules are currently available through September 2007.