Say hello to "Hollywood"; Disney-MGM Studios to get new name

The time for rumors is over. The Disney-MGM Studios theme park is indeed getting a new name, it was announced last Thursday. But it's not one that appeared in any of the rumors. Not Disney-ABC Studios, not Disney-Pixar Studios, not even Walt Disney Studios Florida. A transformation is underway, and by January the park will be known as Disney's Hollywood Studios.

Now, we know that Florida is not Hollywood, and that Disney's studios in California are actually located in Burbank, with the animation studio in the process of heading to Glendale. But this "Hollywood" is more a state of mind than a physical location. After all, when the park was dedicated by Michael Eisner on May 1, 1989, he said:

The World you have entered was created by The Walt Disney Company and is dedicated to Hollywood—not a place on a map, but a state of mind that exists wherever people dream and wonder and imagine, a place where illusion and reality are fused by technological magic. We welcome you to a Hollywood that never was and always will be.

So the Hollywood is more symbolic than anything else. Of course, the Sorcerer's Hat blocking the Chinese Theater kind of detracts from that, but a reactive FAQ distributed to cast members to provide answers to questions from guests notes that, "We feel the Sorcerer Mickey Hat truly represents the magic of show business and the entertainment wizardry of Disney. This imaginative icon falls in line with the tradition of Cinderella Castle at Magic Kingdom, Spaceship Earth at Epcot and the Tree of Life at Disney's Animal Kingdom." This indicates that the Hat is not likely to experience the disappearing wand treatment any time soon.

Along with the renaming, some entertainment changes are in store for the park.

This November, Disney Channel favorite Handy Manny will join the Little Einsteins, JoJo and Goliath for meet-and-greets in the Animation Courtyard near Playhouse Disney–Live on Stage.

Speaking of Playhouse Disney – Live on Stage, that show will get an extreme makeover in January, when the popular children's show closes until some time in February with a new cast of characters. The new show will feature characters from Mickey Mouse Clubhouse, Little Einsteins, Handy Manny and others.

For the holidays, the park will host the Harlem Gospel Choir performing November 30 through December 25. The performance venue has not yet been announced.

In the spring, the Disney Stars and Motor Cars Parade will ride off into the sunset, to be replaced by a Florida version of the popular Block Party Bash "streetacular" from Disney's California Adventure.

Finally, Toy Story Mania is now targeted for next summer. We'll have to wait to see if they make it.

The MGM-to-Hollywood switch is the first major renaming of a domestic Disney theme park. I am, of course, discounting the EPCOT Center-to-Epcot '94-to-Epcot '95-to-Epcot transition of that park as a minor change, since the net result was the dropping of "Center." The only other change larger than this was the renaming of Euro Disney to Disneyland Paris.

Since Disney's deal with the owners of the MGM name (who had tried to void the contract a number of times) is at an end, it's not surprising that the name change is being made. Of course, all publicity for the name change focuses on the fact that the new name better matches what the park is all about. (The loss of the name will not impact other MGM relationships at this time, as the deal for the use of the Wizard of Oz scene in The Great Movie Ride, among others, was separate from the deal for the name of the park.)

"The new name reflects how the park has grown from representing the golden age of movies to a celebration of the new entertainment that today's Hollywood has to offer—in music, television, movies and theater," said Meg Crofton, President of Walt Disney World. "As Disney continues to grow and invest in our family entertainment business, we constantly explore new ways to deliver high-quality, immersive experiences for our guests," she added. "As a park all about entertainment, Disney's Hollywood Studios will deliver like never before. Now we can say that Hollywood is literally our middle name."

Of course, since the terms of the original Disney Dreams Giveaway sweepstakes have the contest running through the end of this year, Disney will have the opportunity to play around with what the prizes are, how many of each will be given out, and how they can be distributed. No word yet on what changes might be in store. It's likely, though, that the Cinderella Castle Suite will continue to be a daily prize.

It took less than a week for Universal Orlando to increase ticket prices to match Walt Disney World's price hike at $71 for a one-day one-park ticket. As with Disney, multi-day passes carry a big discount, and unlike Disney, advance purchase discounts are available and very steep. Still, the focus of Universal is also shifting to the purchase of packages and multi-day tickets. SeaWorld has not yet signaled its intentions, though last year it waited four months after Disney and Universal before raising prices in December.

Last week, a new children's activities program began running on a trial basis at Typhoon Lagoon, similar to the ones available to guests at the Disney resorts. The supervised program for children ages 3 to 9 is available for pre-registration through the concierge at the Caribbean Beach and Pop Century resorts, and remaining spots are available on a first-come, first-served basis for all other guests, up the the capacity of 40 children.

The five-week test is included in the price of admission. There will likely be a fee if the program is made permanent. Check-in starts at 9:30 at Getaway Glen, near the Leaning Palms restaurant, and the program itself runs from 10 a.m. to 2 p.m.

The children are chaperoned by Disney's Ellis-trained lifeguards at a ratio of about five children per lifeguard, and are separated by age into groups for ages 3 to 5 and ages 6 to 9. The activities provided vary by age group, but include: lunch, pitch burst water game, sprinkler fun, water balloon toss, pirate treasure hunt, limbo, dance party with DJ, trip to Shark Reef, Junior Lifeguard experience, parachute games, volleyball, and much more. Children must be potty trained to attend.

If you're going to be at Typhoon Lagoon in the next four weeks and would like to relax without your younger children while they have fun, you may want to give this a shot. If you're not staying at Pop Century or the Caribbean Beach, you probably want to get there early to register.

If you do decide to try this program out, write us and let us know what you think of it!

Adventures By Disney has announced its 2008 destinations, with eight new itineraries and 10 returning trips.

Reservations are now open for returning guests and Disney Visa cardholders, and open soon for everyone else.

Last week, we reported that the Disney Cruise Line had informed passengers with reservations on next year's Panama Canal repositioning cruises that it would be charging them an additional $100 per person due to new per-passenger fees imposed on the cruise lines by the Panama Port Authority that operates the Panama Canal. However, the increase was the total cost of the fees, rather than the increase over the $83 per person in fees that DCL had already built into the fares.

Passengers were up in arms about the price increase, since it appeared that Disney was trying to pocket the additional $83 per person rather than just charging the $17 per person increase.

The backlash from cruisers that had been building since the letters went out a couple of weeks ago has caused Disney to do an about-face, and the cruise line has announced that it will absorb the cost of the fee increases.

…The new National Treasures exhibit at the American Adventure will feature Abraham Lincoln's hat, George Washington Carver's microscope, Mark Twain's pens and Sen. Daniel Inouye's Purple Heart, among others. The nearly 40 exhibits, on loan from museums and private collections, will be displayed indefinitely.

…Mitsukoshi Teppanyaki's reopening as Teppan Edo has been pushed back to November 1.

This week's question: This week's question was submitted by MousePlanet reader Mike Ricciardi. What is the only attraction at Walt Disney World that can be found in all Disney Magic Kingdom-style theme parks throughout the world (except Hong Kong Disneyland, so far), but all of these are located in a different "land" in each park? Stay tuned to next week's park update for the answer.

The answer to last week's question: "Where in Disney's Animal Kingdom can you see a real Baobab tree growing and full of leaves?", which was submitted by MousePlanet reader Anthony Uriaus, is:

The Baobab is the bare looking upside-down tree seen a number of times on the Kilimanjaro Safaris. The real tree is located just outside the entrance to Tusker House, and when the air temperature falls below 50 degrees it must be wrapped with blankets and kept warm. It was found growing just outside Miami and purchased for a considerable sum. 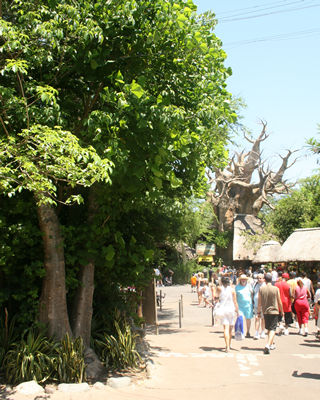 Correction to last week's answer: We stated that Walt Disney World's Big Thunder Mountain Railroad was themed to "Wyoming's Monument Valley." Monument Valley is, of course, located in Utah and Arizona. Thanks to all of the readers who wrote in to correct us. Last week's Park Update, as well as the Park Guide page that we took the answer from, have been corrected.

Do you have a trivia question that you'd like to share? If we choose to use your question, we'll give you credit in the Update. E-mail us here.

MousePlanet sponsor Hotel Royal Plaza, in the Downtown Disney resort area, has enhanced its deal for MousePlanet readers. From now through the end of the year, anyone booking their stay through the MousePlanet Web site has been able to receive discounted rates up to 20 percent off on all room types. Now, for a limited time, you can get even more! The discounted rates now include free breakfast for two in the Giraffe Caf!. Plus children 10 and under always eat breakfast for free! (Two children 10 and under eat free from the kids menu when accompanied by an adult dining from the regular menu.)

We'd like to invite you to try their hospitality!

For passholders and Florida residents, the DVC rates start at $164 per night plus tax in a studio at the Old Key West or Saratoga Springs Resorts. Prices go up from there depending on the resort and accommodations.

In addition to those two DVC resorts, discounts are also available at all deluxe resorts, with passholder rates $5 per night less than Florida resident rates. Some sample rates are garden view rooms at the Polynesian ($249 passholder/$254 resident), Contemporary ($225/$230) and Grand Floridian ($295/$300).

Minimum stay requirements apply for Friday and Saturday arrivals. All rates can be booked up until the date of arrival. Passholders and Florida residents can book via your respective Web sites, by calling your travel agent (Small World Vacations is MousePlanet's preferred Disney travel provider) or by calling 407-560-7277 for passholders or 407-560-7722 for Florida residents.

Disney's popular summer golf discount program, Disney's Price Slice, will return from May 14 through September 27. During that time, a round of golf at any of the Walt Disney World courses will be less expensive after 10 a.m. daily, due to the heat of the summer season. The Magnolia, Palm, Eagle Pines and Osprey Ridge courses will carry a fee of $55, while the Lake Buena Vista course will cost $45. Rates include the use of an electric cart, and are $34-$44 cheaper than regular rates.