What Got Into Walt's Matterhorn?

When Disneyland opened, there was not enough time nor money to do everything that Walt Disney wanted. In an area between Fantasyland and Tomorrowland was a large pile of dirt that had been named "Holiday Hill." Amorous couples quickly discovered that this out-of-the-way location was an ideal location for a possible "E Ticket" activity, which resulted in Disneyland memos to increase security patrols around the area.

When the Disneyland Skyway opened on June 23, 1956, the hill became the home for a large steel tower used to support the buckets that traveled from Fantasyland to Tomorrowland and back. That summer, Walt sat on the hill with Admiral Joe Fowler and talked about the possibility of transforming the hill into a toboggan ride with real snow. The good Admiral was aghast at the logistics of trying to get a working snowmaking machine to generate enough snow to accommodate Walt's vision, and he steered Walt away from the idea by talking about all the other things needed in Disneyland at the time.

In October 1957, Jack Sayers read an article in Funspot magazine about a "wild mouse" coaster that could make quick turns and sharp drops, and he passed the article along to Walt, who passed it along to Dick Irvine. By May 15, 1958, Bill Cottrell was talking at a meeting about converting Holiday Hill with "a pair of wild mouse bobsleds" with a little bit of artificial snow.

In production at the time was the Disney live action film, Third Man on the Mountain based on a true story of a famous mountain climber and a determined young boy attempting to climb the mighty Matterhorn. The author of the book (Banner in the Sky), James Ramsey Ullman, does a quick walk-on that most audiences miss, while clever Disney fans often notice an amusing cameo of a tourist asking for directions played by Helen Hayes, the mother of James MacArthur who plays the young boy in the movie. Walt went to the location for the filming.

"At this time," remembered director Ken Annakin, "Walt had taken a shine to Switzerland and everything Swiss. He used to go there on his summer holidays every year, and adored it, and this story, he felt would be the thing for all young people. No effort was spared to make it as entertaining as the holiday which Walt was taking in Switzerland proved to be for him."

So in another great example of synergy, the new attraction at Disneyland became the Matterhorn (approximately 147 feet high compared to the actual 14,700 feet of the real thing) but it unfortunately did little to improve the box office of the film. It did, however, successfully hide the steel support tower for the Skyway that now went through Disney's first theme park mountain.

When asked why there were holes in the Matterhorn, Walt would smile and reply, "Because it is a Swiss mountain" (the logic being that just as Swiss cheese has holes, so would a Swiss mountain).

The "Second Opening of Disneyland" in June 1959 introduced the very first "E Ticket" attractions: The Monorail, the Submarine Voyage and, of course, the Matterhorn Bobsleds. The Matterhorn Bobsleds are recognized as the first tubular steel roller coaster in the world, and was built by coaster builder Arrow Dynamics (who also suggested that the bobsleds hit the water at the bottom of the ride to slow the speed) and WED Imagineering. The two tracks have differences that have been debated by Disney fans ever since the ride opened over 40 years ago.

Although, it was never quite clear where the Matterhorn was actually located. Originally, it was considered part of the new attractions in Tomorrowland, yet the 1959 Guide to Disneyland lists it in one location as a Tomorrowland attraction and in another says the attraction is located in Fantasyland. That controversy continued for several years, and probably finally deciding that it was located in Fantasyland opened up the possibilities of a new resident.

It never occurred to Walt to include a yeti in the attraction since that was never part of the story of his Swiss mountain. However, when the Walt Disney Company started to rehab and expand Disneyland, the Matterhorn became a topic of discussion of how the attraction might be "plussed." 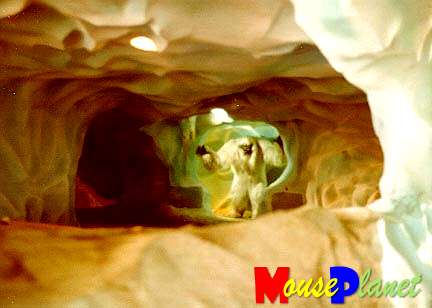 The abominable snowman was a later addition to Matterhorn Bobsleds. MousePlanet file photo.

Fortunately, a talented young show designer, Steve Kirk had been hired in 1976 and for his first assignment he conceived and designed a seven-foot-tall abominable snowman as part of the enhancement for the attraction. For Kirk, it would be the beginning of a 25-year career with Disney that would include him contributing to everything from Epcot to Disney-MGM Studio's Tower of Terror.

Why is Disneyland's yeti white? Well, it was just another example of a long series of misunderstandings that began as early as 1921 when a mistranslation identified the creature as an "abominable snowman." Most researchers theorize that the yeti (usually described as dark-haired) inhabit the temperate, fertile valleys of the Himalayas and only go into the snowy mountains to travel from one area to another.

However, the term "snowman" and the concept of living in the white snow resulted in people in Western civilization to imagine the yeti as a white-furred creature. That image pops up in films such as the stop-motion animation classic, Rudolph the Red Nosed Reindeer in 1964 that featured a white-haired abominable snowman named "Bumble" (an homage to that character appears in Pixar's "Monsters, Inc.").

Prior to 1978, only the top of the Matterhorn had any substantial theming. The track structure was clearly visible to the riders. The 1978 renovation enclosed a lot the interior of the mountain by the creation of ice caves, and the addition of two bobsled cars joined together to doubled the capacity of the number of guests to be surprised by the abominable snowman.

The publicity for the revised Matterhorn centered around "something has gotten into the Matterhorn." The television commercial started with a fog-shrouded Matterhorn, and then it showed different glimpses of the new icy blue cave areas inside. "What's gotten into the Matterhorn at Disneyland? Glistening crystal ice caverns, howling winter storms… and something else." At this point you saw the two glowing eyes of the abominable snowman and heard his echoing growl. Then the commercial ended with a view of the Matterhorn through the fog again and the words, "The New Matterhorn…It could only happen at Disneyland."

Over the last quarter century, Disneyland's abominable snowman has been terrorizing guests and has undergone periodic cosmetic changes from its first appearance. Cast members have dubbed the audio-animatronics creature "Harold" although there is some controversy over the origin of the name and whether it is "official" or yet another cast-member creation like the stories that Walt Disney World cast members tell about their version of the Haunted Mansion.

Harold does share his mountain with another Disneyland Matterhorn legend: A basketball hoop area on the fifth floor. This court is really just a wooden floor area where the mountain climbers could shoot baskets in between climbing sessions. It is not accessible to anyone else while the attraction is running, as internal access to this mountain area is locked for safety reasons.

While Disneyland's creature is clearly in the realms of fantasy from inhabiting a Swiss mountain to being covered in white fur, his counterpart at Expedition Everest in Florida is as close to the actual sightings and legends as possible.

"The yeti's legend is very real, and very important in understanding the history and culture of the people," stated Imagineer Joe Rohde, who has led several expeditions to Nepal and spent weeks at Mt. Everest. Even Loren Coleman, a noted cryptozoological expert, consulted on the final concept and has received accolades from the cyptozoological community. 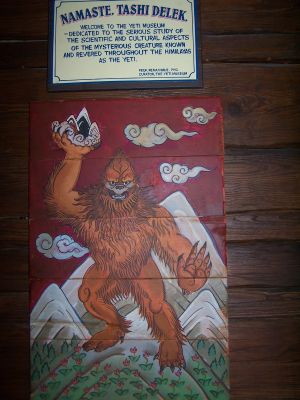 Last year, Rohde told me that he hoped that the inclusion of the yeti might open up the possibilities for the revival of the "Beastly Kingdom" concept from the original plans for Disney's Animal Kingdom ("Animals real, imaginary and extinct").

"Some people consider the yeti a real creature while others think it is imaginary, so it could be a 'bridge' between the real animals already at the park and the fanciful ones that were planned for the 'Beastly Kingdom'," said Rohde.

So while his new "big brother" at Disney's Animal Kingdom is attracting a lot of attention, to those of us who grew up going to Disneyland, Disneyland's abominable snowman is the one who first captured our hearts and imagination.