In Memory of the Original Pleasure Island Story

While the Walt Disney Company is known for storytelling, it is important to remember that stories are very fragile. A slight change in one seemingly minor part of the narrative can affect the entire story.

In the animated classic Pinocchio, Pinocchio and Jiminy Cricket visit Pleasure Island for one night, but when they return home the next morning, they discover that Gepetto has been missing for days or weeks. That must have been some night at Pleasure Island! In truth, the original storyboard had a much longer and much more elaborate departure from Pleasure Island that was very reminiscent of a scene from a prison escape movie, with the duo lost at sea for a period of time. When that section was cut out of the final story, it now made no sense that Gepetto would be missing for so long and his workshop covered in dust and cobwebs.

The same concept holds true for three-dimensional storytelling. On the real Pleasure Island, when the Fireworks Factory restaurant was replaced by the Wildhorse Saloon and then the dance club Motion, the story of the island changed significantly. When the Neon Armadillo became the BET Soundstage Club and the Merriweather Market food court transformed into the Pleasure Island Jazz Company and then became Raglan Road Irish Pub and Restaurant, the elaborate back story created by the Disney Imaginers for Pleasure Island couldn't accommodate these massive cultural changes.

Although, in truth, cast members and guests have been unaware of the original Imagineering storyline of Pleasure Island for over 10 years. Walt Disney once told Imagineer John Hench when discussing the stories behind the park attractions that, "If the guests don't understand the story, then it is not their fault. It is our fault because we have not told the story clearly." A story cannot be maintained and embraced if it is not frequently told. Certainly one of the challenges facing the Disney Company today is that cast members are unaware of the story about their location and how they are part of that story. For a decade or more that has been true of the Pleasure Island cast members, so they have been unable to communicate the rich history of the island to guests.

Perhaps the story for Pleasure Island was unnecessarily convoluted and complicated to begin with in order to encompass everything from a nightly celebration of New Year's Eve to a Jessica's of Hollywood lingerie shop to an Avigators Supply shop that featured the original Pleasure Island mascot of a flying alligator. 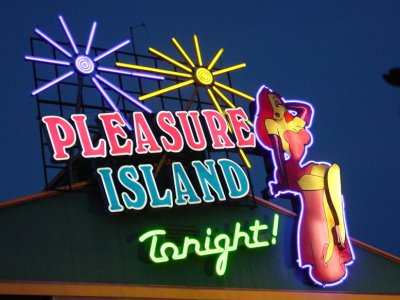 Moving the iconic Jessica Rabbit sign to the trash sparked this article. Photo by Sue Holland.

Recently as I walked through Pleasure Island, I saw the memorable leg-wagging sign of Jessica in a dumpster and buildings with plaques telling the story of Pleasure Island torn apart behind construction walls and a line of porta-potties dubbed by cast members as "PortAPotty Row." Filled with sadness at what has been lost slowly over the years, I felt maybe as a final farewell, I should recount the original storyline of the Pleasure Island as it was written when the area opened in 1989 for future Disney historians.

In 1911, a Mississippi side-wheeler steamed into Lake Buena Vista and dropped anchor next to a low-lying hummock of sawgrass.

The skipper was exultant. What Menlo Park was to Edison, what San Simeon would be to Hearst, this island would be to him. It would be a one-man, dominion-manufacturing center, research lab and development facility, a social nexus for the famous and well-to-do. In short, it would be a place to make his dreams come true. Crying "Fun for all, and all for fun!," this eccentric inventor, industrialist and bon vivant named Merriweather Adam Pleasure leapt ashore.

Pleasure had come to Florida to become the world's foremost supplier of sails. This seemingly hare-brained scheme, hatched at the end of the great era of merchant sailing, was in fact a gold mine. After four years of successful manufacturing, the outbreak of World War I brought a huge world demand for canvas, and Pleasure's fortune was assured.

Living on the boat with his wife, Isabella, his sons Stewart and Henry and his daughter, Merriam, Pleasure began to build his island empire. Cast iron, cement block and timber appearing on the island alerted the local populace (which at that time were simply a couple of alligators and a family of herons) not only that something was up on Pleasure Island but that something was going up. Buildings were built for the manufacture, assembly, and distribution of Pleasure Canvas and Sailmaking, Ltd's products.

First to dominate the Pleasure Island skyline were the imposing canvas fabrication plant (which became the home for "Mannequins") and the sailmaking factory, both constructed in 1912. They were followed in 1913 by the power wtation and the administration building (now known as the "Island Depot"), a wooden shack housing Pleasure Island's paymaster/accountant/bookkeeper who operated it as a telegraph office, mailroom, first aid station, and social center.

The low-lying buildings of Chandler Row were constructed as Pleasure extended his business to refurbishing the yachts of the rich and famous. Along the Row were a brass foundry, upholstery shop, tool crib, and graphics shop, all dedicated to the "Pleasure Principle" of lavish, unique yacht ornamentation.

The Pleasure family soon outgrew their showboat home. In 1918, they moved to a Bermuda-style mansion overlooking Lake Buena Vista (now known as the "Portobello Yacht Club"). However, Pleasure hadn't accounted for his own magpie impulses. Soon, the house was overflowing with booty collected from his exotic voyages. By 1920, the exasperated Mrs. Pleasure threatened to eject her husband from the house unless he found a place for the books and artifacts collected on his journeys.

Pleasure built himself a large library on the opposite side of the island. The place became the headquarters for "The Adventurer's Club," where Pleasure's zany band of yachting cronies and globe-trotting hangers-on swapped tall tales and displayed exotic souvenirs from their travels.

The boom of the 1920s brought prosperity and experimentation to Pleasure Island. A new canvas mill was built, the island was electrified and the former power station became home to the Pleasure Thespian Players (now, known as the "Comedy Warehouse"). In 1924, Pleasure sent to China for the world's leading fireworks expert, the Bang Master. Together they built fireworks in a combination laboratory/bunker until a stray spark from Pleasure's pipe leveled the place (it later became a barbeque restaurant known as the "Fireworks Factory").

So Merriweather quit smoking and turned to less combustible hobbies. By 1927, his collection of desert plants was in danger of overrunning the fragile Central Florida ecology. After a personal visit from the U.S. Secretary of Agriculture (who dubbed his host "The Grand Funmeister"), Pleasure built a greenhouse to contain his "prickly pals" from around the globe (this showcase became the country-western club called the "Neon Armadillo").

Meanwhile, Pleasure's sons were proving to be "chips off the old blockhead," as their mother often said. While "Awkward Stewart" Pleasure pursued the sporting life (when not nursing an injury), Henry, who was known as "The Mad Genius of Lake Buena Vista," began development of a Cellular Automaton, a sort of of computerized robot, inside the Artificial Intelligence Lab, built in 1929 (the automaton was still alive and thriving in 1987 and guided the rebuilding of its home into "Videopolis East").

Demand for the outfitting of luxury watercraft came to an abrupt end in 1929 with the catastrophic decline of the St. John's Aquifer. Merriweather immediately commissioned the J-Boat "Dominoe" and after formally turning over his business to his two sons, set off for a series of around-the-world adventures with his daughter, Merriam.

Between journeys, Pleasure returned to his beloved island and devoted himself to a quest for reusable energy. He was so convinced that "the Power of the Planet" could be harnessed that he converted his canvas-making factories to labyrinthine laboratories.

The mysterious Building X, which was part wind tunnel, part foundry, and part laboratory, was built in 1937 for constructing the "X-Thing," an experimental flying vessel that could harness the power of the wind. The first and only test flight on September 1, 1940 prompted Pleasure, the plane's pilot and sole passenger, to begin broadcasting to outer space from the roof of Building X. The message in Morse Code was "Welcome" (the building later became the "XZFR Rockin' Rollerdome").

In 1941, the Grand Funmeister's favorable fate reversed itself. While circumnavigating Antarctica, the Dominoe pitchpoled in a savage summer storm. It was later reported that all aboard including Merriweather and Merriam Pleasure were lost at sea.

The Pleasure enterprises encountered smooth sailing in the wake of the founder's death. Sailmaking and chandlery continued into the 1950s, augmented by a flying boat service. But by 1955, Pleasure's heirs were bankrupt. The final blow was inflicted by Hurricane Connie, which rendered the buildings unsaleable and their contents strewn across Lake Buena Vista by the winds of change (it was that same hurricane that created "Typhoon Lagoon" and a crate from the Fireworks Factory is in that location).

The once-bustling harbor community became a ghost town. But in 1987, Disney Imagineers discovered the island among the acres of Walt Disney World resort property. Some buildings were renovated and some were reopened. Pleasure Island became a nighttime hot spot with seven nightclubs, 12 shops, and a 10-screen movie theater.

Over 75 years had passed since Merriweather Adam Pleasure and "America's First Family of Fun" came ashore at Pleasure Island when the renovated nightspot opened, but according to the Disney Imagineers, "Along the streets of this reawakened Island you can sometimes catch a glimpse of a portly, but strangely ethereal man, dressed in a yachting cap and natty plus-fours. Or perhaps you'll be sitting in a restaurant booth or a cozy corner of a nightclub when you hear a voice murmur quietly, 'Fun for all—and all for fun!' "

Even this storyline couldn't include everything. "Superstar Studios" was originally "Mrs. Pleasure's Music Parlor" and the home to her gargantuan collection of 78 rpm Italian opera records. "Suspended Animation" was established in 1924 as "Navigational Pleasure Graphics Ltd." where R. North Camilpoter handpainted the bows of yachts that Pleasure refurbished. There are many more stories about the island left to tell.

Whatever is in Pleasure Island's future, for me, these stories will hover over those changes as ghostly reminders of an incredible tale from a different era. It will be the Pleasure Island that I remember.