'The Gremlins' is coming!

Animation historian Leonard Maltin, recently contacted me to obtain some of my research on Disney's unmade World War II animated feature, The Gremlins. The proposed film was based on the first book ever written by author Roald Dahl. This fall, Dark Horse Publishing will release the first reprinting of that novel. Leonard is writing a historical introduction for the book, and wanted to double-check some information about this legendary unmade film that was plagued by troubles.

The book was written while Dahl was a member of the Royal Air Force, and introduces the mythology of gremlins, who are mischievous, fanciful creatures (like fairies or leprechauns) who bedeviled pilots and their planes during World War II. Gremlins are male. Fifinellas are female. Widgets are babies who would grow up to be either gremlins or fifinellas.

The story recounted the adventures of a wounded fighter pilot (who serves as a surrogate for Dahl himself) who befriends a gremlin named Gus, and convinces him to recruit his fellow gremlins to join the R.A.F. in their fight against the Axis powers. The original story, before it was even published, was brought to the attention of Walt Disney who thought it would be the perfect project for his animation studio that had been working on training films for the military.

Initially, Walt worried that a general audience wouldn't understand the concept of "gremlins" and that it might be too uniquely British. So he became a one-man press agent, giving interviews to various newspapers to help excite audiences about the project.

However, the development of the project dragged on and on, and by 1943 the real fear was that "gremlin mania" threatened Disney's rights to the characters. Count Basie recorded "Dance of the Gremlins." A short-lived daily comic strip entitled "The Gremlins" began appearing in newspapers in January 1943. Fashionable ladies began wearing "Gremlin Hats," while more and more magazine and newspaper articles and references to gremlins began to flood the American consciousness.

Even worse, other animation studios announced gremlin-based short subjects. An official Disney Studio memo was sent down to all those involved in the Dahl project to push the character of Gremlin Gus in all publicity and drawings in an effort to try and clearly establish that particular gremlin as an exclusive Disney property.

Roy O. Disney, who by all accounts was more diplomatic in sensitive business matters than Walt, leveraged his Hollywood friendships and the goodwill of the Disney Studio to try to discourage competition at other studios and even sent a letter explaining that he and Walt didn't mind competition "short subject to short subject. But I am very worried when we start to make a feature that takes us at least a year to produce and costs us at least $600,000 to $800,000—I'm worried at the thought of having a property of this size undermined and hurt by a lot of single reels that may saturate the public's desire to see a 'Gremlin' feature and really do us considerable harm in the marketing of it."

One of the efforts by the Disney Studio to push the character of Gremlin Gus was to introduce the character in the popular selling comic book, Walt Disney's Comics and Stories. Former Disney animator Walt Kelly wrote and illustrated a series of two-page Gremlin strips for Walt Disney's Comics and Stories featuring the adventures of Gremlin Gus (and often a widget or two) starting in 1943 with issue #34 and ending in 1944 with issue #41. These self-contained strips were known as "pantomime strips" in the business, since they featured no dialog—and are long overdue to be reprinted.

Another effort to establish the Disney version of gremlin characters was the creation of stuffed dolls. In 1930, Charlotte Clark made the first Mickey Mouse doll. Over the years, Clark also produced promotional dolls for the Disney Studio based on Disney designs for new characters, including ones for Gremlins, Fifinellas and Widgets.

The Character Novelty Company (a Disney licensee from 1940-1947) manufactured a Widget hand puppet in at least three different colors: pink, yellow and grey. The puppet, which was produced in 1943, originally sold for $1.50 with a paper tag that read: "This is an exclusive Walt Disney design of one of the famous Gremlin characters discovered by the RAF."

"A Walt Disney Picture Puzzle" from Jaymar in 1943 had over 300 pieces showcasing a color illustration of 11 gremlins, one widget and one fifinella attacking an Allied fighter plane with the addition of left and right vertical margins featuring characters from the unproduced film.

There was even a full-page color magazine ad produced for Mint O Green, Spear Mint and Pep O Mint Life Savers candy that proclaimed: "GREMLIN CHASERS. You've heard of the Gremlins… pesky little troublemakers that hang around air fields… army camps… ports of call… and battle stations. One good antidote for Gremlins is LIFE SAVERS… they cheer a fellow up when the Gremlins get him down. Maybe that's why our armed forces are ordering so many of them… so … if you have trouble getting some favorite flavor… blame it on the Gremlins." And the color picture accompanying the ad shows gremlins, fifinellas and widgets running frantically away from huge multi-colored lifesavers that were rolling towards them. 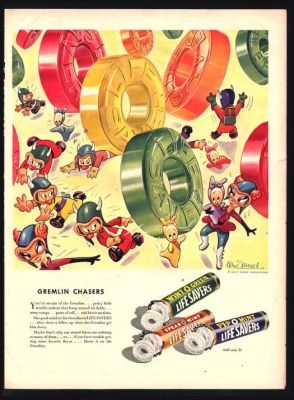 Dahl loved the dolls and was constantly asking for them to distribute to his friends. He may have been unaware of the other merchandising efforts, but he definitely saw the Life Savers ad in major magazines and was very unhappy. The ad prompted Dahl—who was becoming even more difficult in regards to how Disney was handling his Gremlins—to protest in a May 19, 1943 letter to Walt Disney about the possible damage to the mystique of the characters being used in such a commercial way:

"I nearly fell off my chair when I opened LOOK magazine this morning and saw the Life Saver advertisement with our Gremlins in it. You and I and others in the studio have spent many hours wondering how we can make sure of preserving in the eyes of the public basic principles of Gremlinology, and of convincing them once and for all that Gremlins and their kin do not associate themselves with things other than aircraft and pilots.

"Imagine then my horror at finding a group of the little men, not to mention the Widgets and the Fifinellas, busily engaged in playing around with a lot of over-sized and bilious looking peppermint life savers!

"I was horrified not only because the Gremlins were being completely misrepresented, but also because I could see you destroying in the eyes of the public the legend around which you are going to build your film, and upon which the success of the whole movie will depend. We hope to infuse a certain mystic quality into the film, and in order to achieve this we must try to avoid Pep O Mint and Wint O Green Tablets.

"Please do not think that I do not realize that you depend to a great extent for your revenue upon advertising rights and that it is essential for you to make use of this medium if you are going to make any profits out of the deal, but surely you realize that if the public are going to see Gremlins playing with peppermints, hitching up bicycles, trying out tooth brushes, and telling the people that if they use Listerine Antiseptic, they will not get dandruff in their hair, then I think, in fact I am convinced, that the legend will be ruined. You see, people are beginning to regard you as an authority on these things, which is as it should be because you are rapidly becoming one though the medium of your advisers; therefore, anything you say about Gremlins from now on, goes.

"I suggest that you give very serious consideration to the following: that the use of Gremlins in advertising should, where possible, be confined solely to aircraft manufacturers or to makes of aircraft parts, and that the things you make them do in your pictures should be the things which they normally do anyway. This will preserve the whole idea. If financial considerations make it impossible for you to narrow down the sales of advertising rights to this extent, then the makers of peppermint tablets, gum and toothpaste will have to have an airplane, a real well-drawn airplane, embodied in their advertisements if they wish to utilize Gremlins. And on this airplane the Gremlins can be shown going about their business. I can see that there might well be difficulties over this, but surely it is the only way of dealing with the matter and of preserving the true character of the story.

"I am sorry to be a nuisance over all of this, but I am quite sure that not only you, but Jim (Bodereo) and Ted (Sears), and others working on the subject will know how I feel and what the RAF would think; so could you please let me have your reactions by return. Between us I am sure that we can come to some arrangement. Yours very sincerely, Stalky." ("Stalky" was the nickname that Walt had given Dahl because he was so tall and thin.)

Walt very patiently reassured Dahl it was all just part of the process to establish copyright in a reply dated May 26,1943:

"Your letter of May 19th received and contents noted. You may rest assured that any suggestions you have will always be given careful consideration. A copy of your letter is being sent to my brother, Roy, and Mr. Kay Kamen in New York. However, I would like to correct an impression which was indicated in your letter. It is not the financial returns with which we are concerned, but through this medium we are able to establish our rights to characters through various forms of publication, and unless these rights are established, we may not have any control over the Gremlins when they do come out. Our entire idea is one to establish our copyrights with no thought whatever of financial gain.

"I think you better have a talk with Mr. Kamen and Roy as I believe you have the wrong impression of just how we function. We have reached a point in the story where, I believe, it would be helpful if you could make arrangements to come out for a period of at least two months so that, together, we can whip the story into its final shape. If you are not able to do this, I do not feel that I can be held responsible to the Royal Air Force for the finished treatment of this material. Therefore, I wish you would please do what you can to come to the studio for at least the time necessary to put the script into shape for production. I would appreciate knowing what the possibilities are for you to spend some time with us."

Once again, Dahl was unable to make arrangements to visit the Disney Studios to work on the treatment. Kay Kamen called Dahl long distance and reported to Walt that he "had a nice chat and explained to him that I didn't believe that the proper understanding existed about the way in which we have to handle Walt Disney subjects for the purposes of protection and for other reasons" and arranged to try to get together with him personally so that "it will straighten out in the end."

This incident was only one of many speedbumps between Dahl and the Disney Studio that resulted in the film not being made and the original book never being reprinted.

Interestingly, when the Disney Company decided to get into syndicated television shows with "Duck Tales" and "Tale Spin", Jeff Katzenberg explored the possibility of creating a syndicated television show based on Dahl's gremlin concepts but was convinced that the success of the recent Joe Dante live action movie, "Gremlins", would significantly impact the ability of the Disney Company in trademarking the name and producing merchandise.