Rumors continue to swirl that the attraction ride in the Mexico pavilion at Epcot will be re-themed to showcase the Three Caballeros. However, even if this rumor turns out to be true, I will bet that the re-theming of the attraction will not include the fourth caballero that Walt was intending to include in the planned but never made third Latin American animated feature, Cuban Carnival.

In 1941, John Hay Whitney, the head of the Motion Picture Division reporting to Nelson Rockefeller, Coordinator of Inter-American Affairs (CIAA), worried that Latin American countries might align themselves with the Axis powers during World War II.

Whitney's solution was to have Walt Disney make a goodwill tour of Central and South America with the hope that the magic of the Disney and the universality of the characters would help convince the Latin American people to support the United States. 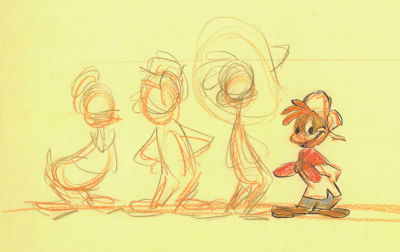 An early test comparision sketch showing the fourth caballero in relation to the others. Sketch drawn by Fred Moore, courtesy the collection of James Walker.

To sweeten the offer to Walt, Whitney offered to underwrite $70,000 in tour expenses and to advance up to $50,000 each for the production of five short cartoons focusing on the countries Walt would visit.

With the Disney Studios deeply in debt because of closure of European markets due to the war as well as a bitter ongoing strike by Disney employees that was impacting production, Walt accepted the offer and in August 1941 left for Rio de Janeiro with a group of story men, animators and designers like Mary Blair and Herb Ryman.

Originally, the plan was to make up to 12 short cartoons using the material gathered by the Disney team during its trip. Each cartoon would have focused on one particular country.

That plan changed thanks to memos to Walt from producer David O. Selznick who suggested that it would be more effective to package the shorts in groups of four and release them as feature films. It was felt that a cartoon focusing on one particular country would be very popular in that country but not as much in the other countries.

Also, since the purpose of the project was to create goodwill and friendship among the countries, by combining the cartoons together it would help introduce audiences to other cultures and hopefully build that bond.

Saludos Amigos was released in the United States in 1943 (but had premiered nearly six months earlier in Rio de Janeiro) and was a loose anthology of four short cartoons about South America tied together with 16mm film footage shot by Walt Disney himself. 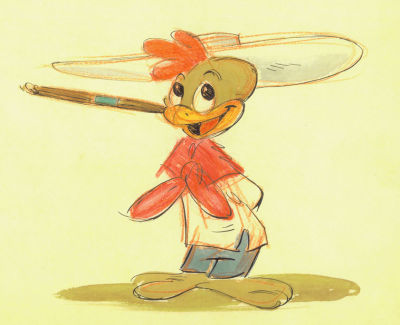 The film was so popular critically and financially that it was followed in 1945 (although it officially premiered in Mexico City December 1944) by another loose anthology of Latin America-themed cartoons entitled The Three Caballeros that introduced the Mexican rooster Panchito joining Jose Carioca and Donald Duck as a memorable trio.

Brazilian entertainer Jose Oliveria supplied the voice for Jose Carioca but the first name of the character may also have been inspired by Brazil?s popular editorial cartoonist, Jose Carlos de Britto e Cunha. Actor Joaquin Garay (for many years a contract player at MGM Studios) supplied the voice for Panchito. His son, Joaquin Garay III played a major role in the 1980 Disney feature Herbie Goes Bananas as Paco.

The release of Saludos Amigos sparked strong complaints from Cuba, Venezuela, Uruguay and other countries who felt they had been slighted and excluded since their particular countries did not have a specific cartoon.

Even countries that were showcased had some objections. Chilean cartoonist Rene Rios (know by his pen name of "Pepo") was upset that Chile was represented by a little plane named Pedro who had difficulty flying over the Andes Mountains. So he created "Condorito", a Chilean condor living in a fictitious provincial town named Pelotillehue (typical of small Chilean towns) to represent Chile.

Originally, Condorito looked very similar to Donald Duck but his appearance evolved over the decades and the character has become very popular in Latin American countries.

Other short cartoons developed from that Disney Latin American tour experience appeared as individual shorts: "Pluto and the Armadillo" (1943) , "The Pelican and the Snipe" (1944) featuring Monte (pelican) and Vidi (snipe), two birds who take care of a lighthouse near Montevideo (the capital city of Uruguay), and of course, "Blame It On the Samba" (originally titled "Brazilian Rhapsody") with Jose, Donald and the Aracuan Bird appeared as a segment in the compilation film Melody Time (1948).

Today, it is often forgotten what a popular tourist location Cuba was during this time period. In fact, much of the land and industry in the country was owned by United States interests, and the nightclubs and gambling were reportedly under the supervision of American mobsters. So, when Cuba complained strongly that it was not represented in these films, the Disney Studio considered developing a third Latin American-themed compilation feature that was tentatively titled Cuban Carnival.

While the 1941 South American trip has been frequently documented, there was also another smaller research trip launched in September and October of 1944 to Cuba. That group included artist Fred Moore, whose talents at creating appealing characters is very evident not only in the original designs for the Three Little Pigs and the re-design of Mickey Mouse but in his numerous "cheesecake" sketches of cute girls that were used as reference for the centaurettes in Fantasia and the characters in "All the Cats Join In". 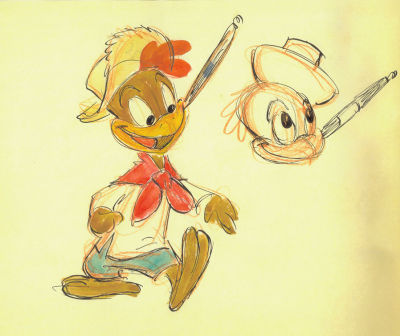 Just as Donald Duck was the representative of America, Jose Carioca of Brazil (so closely associated that a popular comic book with his exploits has appeared monthly in Brazil for decades) and Panchito of Mexico, the Disney artists wanted to develop a character that would represent Cuba.

They first considered another bird so he would fit in with the other bird characters. They thought of a "guajiro" or "kikirigui" which was a popular name for a scrawny little bantam rooster, a fighting cock with lots of attitude. Supervising producer Norm Ferguson who had been on the previous South American trip specifically assigned Moore to the character hoping the artist would be able to bring out something special in the little bird.

No final design was ever approved and no story was ever developed beyond some concept sketches. One suggestion was to have Donald and Jose become friends with the Cuban bird who would have been a plantation owner and have taken them on a tour of Cuba. On the tour, they would have seen tobacco leaves roll themselves up into cigars and then smoke themselves down to a gray ash while some hot Cuban music played in the background.

Some of the early concept sketches of the character by Fred Moore were posted by animation story artist Jenny Lerew on her outstanding Blackwing Diaries Blog (link)on June 1, 2006. In fact that entire week's postings were of never-before-seen artwork and photos of Fred Moore from the collection of Moore scholar and collector James Walker including these sketches shown here of the lost caballero.

For this planned but unproduced third feature, artist Mary Blair did some sketches of carnival celebrations, cockfights, Jose dancing with a line of cigars and little boy and girl dolls made out of tobacco leaves to help inspire some possible story concepts. However, the fact that The Three Caballeros lost money and that the war had ended and opened up additional foreign markets for Disney productions, probably influenced Walt not to pursue a third Latin American feature. So, the unnamed fourth caballero only exists in some appealing concept sketches by the legendary Fred Moore.

Fortunately, the Walt Disney Family Foundation has commissioned author J.B. Kaufman, the outstanding Disney historian responsible for books like Walt in Wonderland, to write an extensive book on Walt?s Latin American films and that work may supply more information on this fascinating footnote in the history of Disney.