The Secret Origin of Space Mountain

The Secret Origin of Space Mountain

There have been some recent rumors that there are some plans to make some changes to Walt Disney World's Space Mountain so it got me to thinking about the secret origin of Space Mountain shared with me by Imagineer Marty Sklar several years ago.

Disneyland's Space Mountain officially premiered May 27, 1977. At the time it was estimated than over a million man hours had been devoted to making it a reality.

In 1977, at Disneyland, one of the custodial sweepers in the Tomorrowland area was a very young John Lasseter in his very first Disneyland role. While most Disney fans know about Lasseter's career as a Jungle Cruise skipper, he began his Disney career in a much different role. He got to see first-hand the excitement and crowds surrounding the opening of a major Disneyland attraction.

How was this innovative attraction born? I unexpectedly learned the secret origin of the attraction when I asked Imagineer Marty Sklar six years ago what was one of the most difficult projects he worked on for the theme parks.

As Marty was autographing one of my copies of the original hardcover Disneyland souvenir guides that he wrote, he replied: "Most difficult project? Trying to sell RCA who was willing to put up $10 million for an attraction. John Hench and I designed a ride to go inside a computer. We pitched it to all the lower folks and finally had to make the pitch to Sarnoff [David Sarnoff, general manager of RCA]. We put up the storyboards and we were told that Sarnoff always sat at the head of the table. So he could barely hear us and couldn't see the small storyboard drawings. He wrote a note, and passed it to his vice president who passed it to a subordinate, etc. so it eventually got to me. The note read 'Who are these people?'

"Nobody had told him why we were there or what we were doing. Defeated, I told Hench to come up with a project he wanted to do and then we would try to sell RCA on it. So Hench came up with Space Mountain. When it came time to pitch, I insisted that Card Walker and Don Tatum accompany us, since Sarnoff knew them. Also we insisted that Sarnoff sit in the middle of the table. The RCA people said 'no' and I said, 'we are talking to the person sitting in that chair.' So they put a person guarding the chair and when Sarnoff came in they said 'the Disney people would like you to sit here.' Sarnoff said 'sure.' Nobody had ever asked him before to sit anywhere else. They just assumed he wanted to sit at the head of the table. We sold the Space Mountain project."

Actually, the birth of Space Mountain began much earlier in a series of meetings with Walt Disney in 1964. A design team headed by John Hench came up with a concept of redeveloping Tomorrowland in Disneyland with a Space Port that would feature a steel track roller coaster with four separate tracks twisting and turning around each other in a serpentine fashion.

It was Walt who wanted the roller coaster to be in the dark so he could have precise control of the lighting and to project images on the interior walls.

Hench came up with the original drawing for the exterior of the attraction in 1965 and it is very similar to the final cone shaped version familiar to park-goers today. However, for a variety of reasons, Space Mountain did not debut with the new Tomorrowland in 1967. It wasn't until that meeting with RCA that the project was revived for the Magic Kingdom at Walt Disney World. 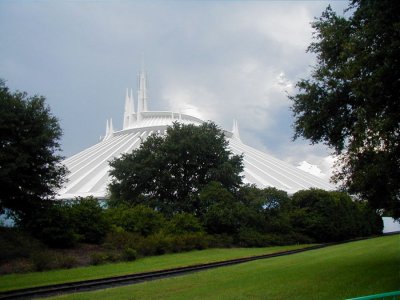 View of Space Mountain from outside of the park. MousePlanet file photo by Brian Bennett.

As early as 1972, RCA sent out a publicity release featuring an "artist's conception" that refers to the ride as "the thrilling Space Voyage in Tomorrowland opening in 1974."

According to Disney publicity from 1975, the storyline of the attraction was that "Space Mountain captures the essence of Superspace. The expectant 'space voyager' is transported through the space station launch portal, and through the vast man-made 'solar field.' He then orbits the glowing 'satellite,' becomes engulfed in spectacular nebulae and plunges past myriads of [sic] strange stars and unknown galaxies to begin re-entry."

Disney proudly proclaimed that the attraction took full advantage of knowledge gained during the manned and unmanned space probes conducted by NASA. Former astronaut Gordon Cooper, commander of Mercury 9 and Gemini 5, became a member of the Disney team and provided personal consultation to help insure the authenticity of Space Mountain. He saw Space Mountain as "an attempt to give people the most realistic feeling of what they might encounter in space without actually taking a real space flight. As we gain new knowledge and insight concerning space, Space Mountain will be improved upon in true Disney fashion."

It was the first indoor roller coaster where riders were in total darkness for the length of the ride so they couldn't tell where the drops or turns would occur. It was also the first thrill ride that was controlled by computers to maintain safety. Space Mountain was controlled by a pair of very sensitive Nova 2/10 computers, which were able to respond instantaneously to any unexpected event by immediately halting all mechanical movement.

Each vehicle consisted of two six-passenger "rocket sleds" in tandem that were separated by a "block zone," a part of the track which consists of mechanisms to slow or stop the vehicle in case of an emergency situation. If the vehicles are too close together at any point on the track, the computers will stop all vehicles from that point back to the loading area until an adjustment can be made.

Dave Snyder, manager of scientific programming, stated that the computers must be taught to watch each of the 11 or 12 vehicles on the spaghetti-like complex of track and to time each one. When faced with incoming data, it must make one of three decisions concerning operation of the attraction: to halt everything, to inform the ride operator of a possible impending problem or to allow the system to proceed as normal. If there is even a remote likelihood of vehicles colliding, the entire system is shut down automatically. If the computers suspect that some aspect of the attraction is malfunctioning, a light flashes the possible trouble on a status board inside the control booth.

While today, this type of system is fairly commonplace, in 1975 it was highly innovative and emphasized Disney's concern about guest safety. There was a movie in which Gordon Cooper explained what was to happen and even a "chicken" ramp for those guests who might then decide that perhaps this is not exactly the attraction for them. In the preshow area were space frame portals to provide a view of the attraction in actual operation. In effect, every effort was made to make the guests comfortable including the track at Disneyland designed so that passengers would experience the least degree of physical disturbance during their ride.

"Since each vehicle runs at an approximate speed of 40 feet per second [about 28 to 30 miles per hour], smooth transit is essential," claimed Disney publicity in 1975.

In the event of a power failure, an emergency backup system called an Uninterruptible Power Supply provided power to the computer system. This emergency energy supply lasted for about 30 to 45 minutes-more than enough time to activate emergency systems and to return all vehicles to the unloading area.

So as soon as the Imagineering team returned to California from Florida, they were given the assignment to build another Space Mountain in Disneyland, but it really became a space problem. There just wasn't enough space in Tomorrowland for such an attraction, since the space allotted for it originally in the Space Port proposal had been utilized by other things for the "New Tomorrowland." Also the scale of the Florida attraction was so huge that it would dwarf Disneyland's Main Street - among other things.

Converting the attraction from the double track in Florida to a single track and constructing the base of the attraction roughly 15 feet below ground effectively scaled down the massive building so it would fit and was still almost 50 feet shorter than the Matterhorn.

For Disneyland, there were additional plans to be connected to Space Mountain, according to the winter 1975 edition of the cast member publication Backstage..

"Glenn Durflinger, project designer at WED, has been responsible for the overall design of Space Mountain, including the stage and restaurant area which is to be integrated with the main structure. It will basically feature a fast foods area on terraced levels with all tables overlooking a dance floor and an amphitheater stage with graduated seating. This arrangement will enable people dining to listen to performers and watch other guests dancing below them.

"Access to the dining area will be provided by a double ascending, moving walkway similar to that used in the WEDway PeopleMover attraction. This track is also being redesigned to provide its passengers with a visual preview of Space Mountain."