The Creation of Monster Mickey 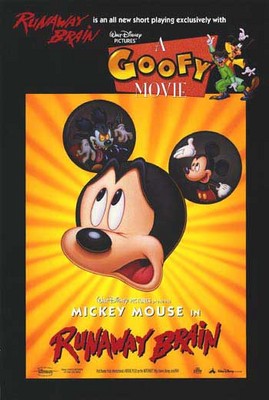 Some Disney fans might not realize that when researching Disney history, it is sometimes easier to find out information that occurred decades ago than uncover information about a more recent Disney project.

For example, the Disney Institute opened about a decade ago but no one has written about the five different names that were considered for that project, how the head of the Animation Department got a double-decker party bus to appear on the site on opening day, and the one Disney character that the head of the Disney Institute announced would never set foot on Institute property. Those historical moments have already been forgotten and not documented and all that was only 10 years ago.

Something else happened a little more than 10 years ago and despite it being well-loved by a niche of Disney fans, myself included, very little has been written about its production.

"Runaway Brain" is an Academy Award nominated seven-minute short-subject animated primarily by Walt Disney Feature Animation Paris that was released on August 11, 1995 attached to the live-action feature A Kid in King Arthur's Court. When I was in Los Angeles, I saw many people pay money to see the short and then walk out before the live action feature started.

The short was re-released on July 16, 1997 attached to Disney's live-action George of the Jungle. It was later shown twice on The Disney Channel before finally being released on The Walt Disney Treasures DVD collection: Mickey Mouse in Living Color, Vol. 2.

"Runaway Brain" was the first time that Mickey Mouse was seen on the big theatrical screen since the 1990 featurette The Prince and the Pauper released five years earlier. The idea for creating a new Mickey Mouse short was to have it ready for Mickey's 65th birthday in 1992 but, obviously, that deadline came and went.

Fortunately, the desire to produce a new Mickey Mouse animated short remained. In addition, the creation of the French studio also created the opportunity for the short to be made since the other animation resources at Disney were already committed to feature productions and this would be a chance to ramp the animators up to speed on a Disney project.

Several story ideas were being considered when animator Andreas Deja remembered that, "Someone at a meeting, and almost out of boredom, drew Mickey Mouse as a monster. Someone else saw it and said, 'That's hysterical!' All of a sudden, the idea came up to do a satire of Frankenstein."

There are multiple layers though out the entire film. While the cartoon does satirize the film version of "Frankenstein," the mad doctor is named "Dr. Frankenollie," a tribute to the names of two of Disney's legendary animators, Frank Thomas and Ollie Johnston. The design of the character is a spitting image of Professor Ecks, a mad scientist monkey Mickey tangled with in one of his classic 1930s comic strip adventures drawn by Floyd Gottfredson. Dr. Frankenollie's laboratory is located at 1313 Lobotomy Lane. Disneyland's street address is 1313 Harbor Boulevard.

In the short, Mickey is at home intently focused on a video game. Minnie arrives to find that Mickey has forgotten their anniversary. Mickey comes up with a last-minute idea to take her to a miniature golf course but Minnie misinterprets what she is supposed to be looking at on the newspaper and thinks Mickey is taking her to Hawaii.

After Minnie leaves, Mickey uses the same newspaper to find a "help wanted" ad where he can earn the entire cost of the Hawaiian trip for one day of "mindless work."

When Mickey knocks on the door for the job in a composition reminiscent of the horror film The Exorcist, he gets sucked downward through a trap door into Dr. Frankenollie's laboratory, where the mad doctor plans to switch Mickey's brain with that of his monster, Julius. The name Julius is a reference to one of Walt Disney's first animated characters, a black cat in the Alice Comedies.

However, the character of Julius looks just like Mickey's nemesis, Pete. The brain transfer is a success, with Mickey's mind ending up in Julius' giant body, and Julius finding himself in control of Mickey's body although that body now has wild eyes, sharp teeth and ragged, torn ears. Unfortunately, Dr. Frankenollie crumbles to death in the experiment and cannot reverse the effects.

The dimwitted Julius opens Mickey's wallet and finds a photo of Minnie. Julius falls instantly in love with Minnie's picture and escapes the laboratory to search for her.

Julius finds Minnie shopping for a tiny bathing suit for the Hawaiian trip. The real Mickey (in Julius' body) shows up to save Minnie who mistakes him for a monster. A chase ensues where Mickey is finally able to convince Minnie of his identity. There is a climatic battle between Mickey and Julius on top of a building.

During the course of their battle, Julius and Mickey fall onto electric wires, which cause their minds to transfer back to their correct bodies. Mickey is able to defeat Julius using the same technique he used defeating the giant in "Brave Little Tailor."

This short plot summary does not do justice to the quickly paced film. The film is littered with sight gags that almost require a frame by frame examination to be revealed. Zazu from The Lion King appears briefly as part of the debris being sucked down the trap door with Mickey Mouse and then is spit out of Julius' mouth when he roars at Mickey on top of the building.

In Mickey's home is a model of the Starship Enterprise from Star Trek and a picture on the wall has a piece of cheese and the motto: "Just Say No."

"My goal was to capture the appeal Mickey had in the black and white short days but place it in a color body," said director Chris Bailey a month before the short opened. "People would ask 'Which Mickey model are you going to use?' and they were shocked when we said, 'We're going to make up our own.'"

Bailey claimed that Mickey's body was inspired by the short "The Little Whirlwind" (1941) but the personality was from the black and white era of "Two Gun Mickey." "We watched a lot of the early shorts," Bailey remembered.

"There's such a degree of subtlety in the work, the length of the nose, how the eyes relate. One big graphic feature is Mickey's ears. They are always round, no matter what! Whichever way he turns, they glide on his head, up and down. It's so weird a thing, and nobody questions it! It should look very strange, but it doesn't. He has lots of crazy things like that, and they make the character," remarked Deja, "It's a kick to do this character that you've grown up with. You get the opportunity to pass it on and he gets a little encore in life. We all wanted to do something a little different with the character though, a little edgier."

Deja's favorite Mickey Mouse moments in animation include "Society Dog Show" (1939), "Mr. Mouse Takes a Trip" (1940) and, of course, the "Sorcerer's Apprentice" segment of Fantasia. He used those scenes as inspiration for his work on Mickey.

The first animation Deja did on the short was the opening scene of Mickey playing the video game with Dopey battling the Wicked Witch from Snow White who is throwing poisoned apples and has apparently already dispatched the six other dwarves since their tombstones are at the bottom of the screen.

"At first I wasn't sure if we should push it with the video game sequence, but once I saw the designs and got into it, I thought it fit the character. He would do that now," Deja recalled.

The short was written by Tim Hauser who worked on Beauty and the Beast and House of Mouse although he got his start as an animator working on among other things "Sport Goofy in Soccermania." The music was by John Debney. Debney was the son of Disney Studios producer Louis Debney (Zorro, The Mickey Mouse Club) and is one of the most sought-after composers in Hollywood. Among other Disney credits, he composed the music for the "Phantom Manor" ride at Disneyland Paris.

The film had its beginnings and endings in California but most of its middle was produced at Walt Disney Feature Animation Paris, France. "We had to go through lots of explanation, chalk-talk and explanation about how the character's put together and how he's drawn. They have a lot of talented people there," remarked Deja to the press when the short was released.

However, while the short received an Oscar nomination and was enjoyed by people who saw it, many of the executives at the Disney Studio quietly commented that it was too much like a wacky Warner Brothers "Looney Tunes" with its raucous action and swift pacing which is one of the reasons it did not receive a lot of publicity when it was released.

Disney Merchandise was even more horrified. They couldn't create merchandise of Mickey in the huge monster body because it didn't look like Mickey; it looked like a huge Frankenstein Pete. If they created merchandise of Mickey's body when Julius's brain was in Mickey, then they had this horrific looking Mickey with sharp teeth and torn ears.

At the time, Bailey defended his artistic design choice by saying, "We had the opportunity to play with a corporate symbol and not have it be him. We could scruff him up a little, give him shark teeth and have fun without tarnishing the image."

Animator Deja added, "We knew we wouldn't be jeopardizing his personality because it really wasn't Mickey."

"The goal with 'Runaway Brain' was to make a modern short that people wouldn't confuse with a cartoon dug from the vault. That's why I made him younger and a bit more aggressive, which was actually consistent with his early black and white film persona from films like 'Building a Building'. There was a management change near the end of production and the new powers were less comfortable with a monster's brain running around in the corporate symbol's body," recalled Bailey many years later in an interview. "Several shots were cut, drool removed and ending changed. America's moms that didn't see the cartoon, but saw merchandise in the Disney stores thought Disney changed Mickey's design just to appeal to the skateboard crowd. In that respect, they (the Disney Studio) probably see the cartoon as a misfire."

Interestingly, Bailey's work on this short got him a job as the Supervising Director on Kevin Smith's short-lived animated series Clerks.

"Kevin Smith didn't know my name but liked the Mickey Mouse cartoon I directed titled 'Runaway Brain' and wondered if I was available. I suppose he figured that anyone who could get a cartoon made at Disney where Mickey Mouse ran around like a mad monster would be a good fit for him," laughed Bailey.

"Runaway Brain" remains a problematic Mickey Mouse short although merchandise, including a comic book adaptation by Gemstone comics (Mickey Mouse And Friends #269, which you can still purchase as a back issue from Gemstone (link), continues to appear sporadically since its release over a decade ago.