The Walt Disney Company today unveiled a significant multi-year expansion plan for the Disneyland Resort in Anaheim that continues its growth as a multi-day, world-class tourist destination.

“The success of the Disneyland Resort over the past few years provides us with both the opportunity and the need to invest for growth, to enhance and expand the experience for our guests and attract new visitors, while at the same time delivering attractive returns on the investment," said Iger. “This plan is a reflection of our belief in the bright future of the Disneyland Resort and our continuing commitment to grow the Anaheim Resort Area as a world-class tourist destination.”

Disney Imagineers will be bringing more of Walt Disney into Disney’s California Adventure, celebrating the hope and optimism of California that attracted Walt to this land of opportunity in the 1920s. Guests entering the new Plaza will be instantly immersed in the world that inspired Walt during his early days as an animation pioneer. The new, interactive Walt Disney Story attraction will set the stage for the unfolding story of Walt that will permeate the park.

The expansive program reaches throughout Disney’s California Adventure, with an amazing Little Mermaid attraction, a groundbreaking, signature nighttime spectacular and new viewing area for 9,000, and the addition of the 12-acre Cars Land featuring the world of Radiator Springs with three new attractions. Extensive landscaping, new retail and dining will create an even richer environment throughout the park in ways that reinforce Guests’ connection with Walt.

“Our Disneyland Guests have a deep emotional connection with Walt Disney, whose life story really captures the pioneering spirit of California in the 1920s,” said Rasulo. “The creative evolution of Disney’s California Adventure will connect guests to Walt’s own California adventure and reflect the place that he found when he first arrived with a cardboard suitcase in his hand and a head full of dreams.”

The expansion is part of Walt Disney Parks and Resorts’ overall growth strategy of continuing to invest in its core business of existing parks and resorts around the world, while exploring new opportunities to capture more of the growing family vacation market. This announcement follows Disney’s ground-breaking last month for a 250-room expansion of Disney’s Grand Californian Hotel & Spa, including 50 rooms dedicated to the West Coast debut of Disney Vacation Club, the company’s growing time share business.

Since then, the Disneyland Resort has continued to grow with the addition of popular attractions and shows, including: Finding Nemo Submarine Voyage, Pirate’s Lair on Tom Sawyer Island, Buzz Lightyear Astro Blasters, The Twilight Zone Tower of Terror, Monsters, Inc. Mike & Sulley to the Rescue!, Block Party Bash, High School Musical 2: Schools Out!, Disney Princess Fantasy Faire, and Jedi Training Academy, along with the re-Imagineering of Space Mountain and enhancements to Pirates of the Caribbean.

“This expansion builds on a commitment we made more than a decade ago to create and grow the Anaheim Resort Area as a world-class tourist destination where guests would want to stay for more than one day,” said Disneyland Resort President Ed Grier. “That investment has become a success for Disney, the Anaheim community and for the economy of Southern California.”

According to the Anaheim/Orange County Visitor and Convention Bureau, Anaheim is one of the fastest-growing tourist destinations in the country, enjoying some of the highest hotel occupancy rates in the nation and attracting millions of visitors each year who spend billions of dollars.

Coming to Disney’s California Adventure Over the Next Several Years

In addition to the new themeing and attractions, Disney’s California Adventure will receive new restaurant and retail innovations, landscaping to enrich the placemaking, facade and graphics enhancements, and an extensive menu of entertainment and events.

Disney’s California Adventure is already home to some of the Disneyland Resort’s highest-rated attractions and shows, including: Soarin’ Over California, California Screamin’, The Twilight Zone Tower of Terror and the Broadway-caliber show, Disney’s Aladdin - A Musical Spectacular. 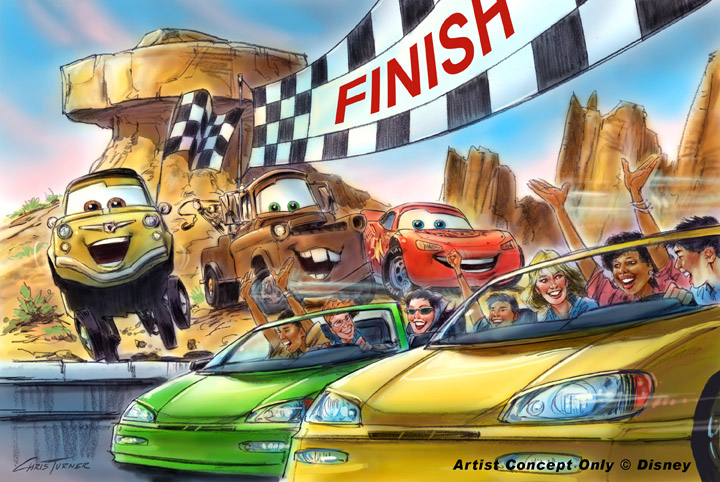 The expansion will culminate with an entirely new, 12-acre addition: Cars Land, immersing guests into a world inspired by the hit Disney/Pixar movie, Cars, playing to America’s love affair with automobiles.

Radiator Springs Racers, a major “E-ticket” attraction, places guests right in the middle of the amazingly detailed, dimensional Cars world of Mater, Lightning McQueen, Doc and Sally. Guests get a quick race briefing from Doc and Lightning, and suddenly find themselves in the midst of a race around hairpin turns and steep banks. 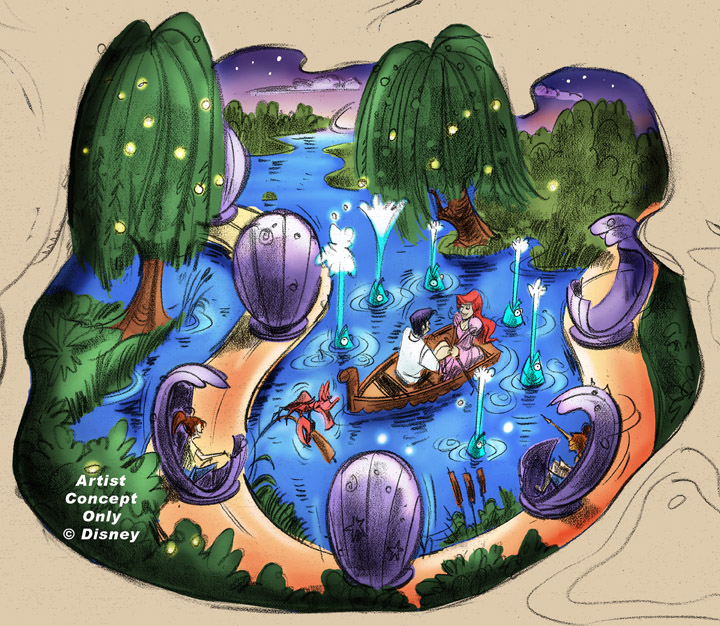 A major ride based on Disney’s classic The Little Mermaid comes to the park’s Paradise Pier with leading-edge animation and special effects. Guests will dive into the magnificent scenes and magical songs from the movie. A Mermaid Grotto area with a fountain and sand castle will offer new play experiences for children. 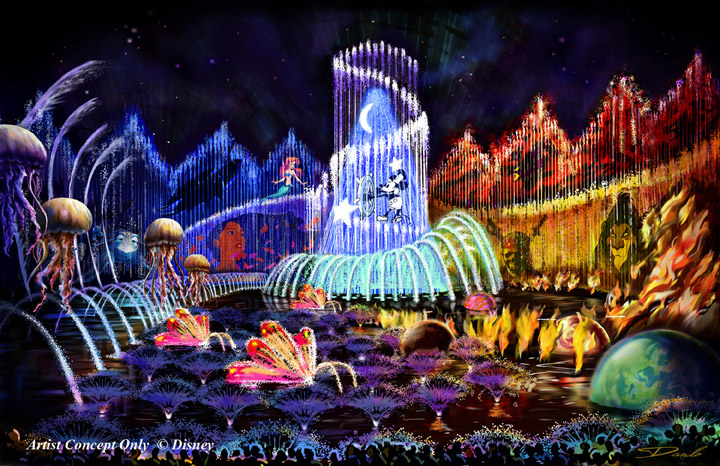 The dramatic and unique Disney’s World of Color will bring new nighttime excitement to Paradise Pier. This nightly panorama of spectacular water effects, colorful lighting and music will bring Disney animation to life with an entirely new creative and technical approach. The 9,000 person viewing area offers prime waterside viewing of the show – and provides a site for live entertainment, music festivals, and outdoor film premieres. 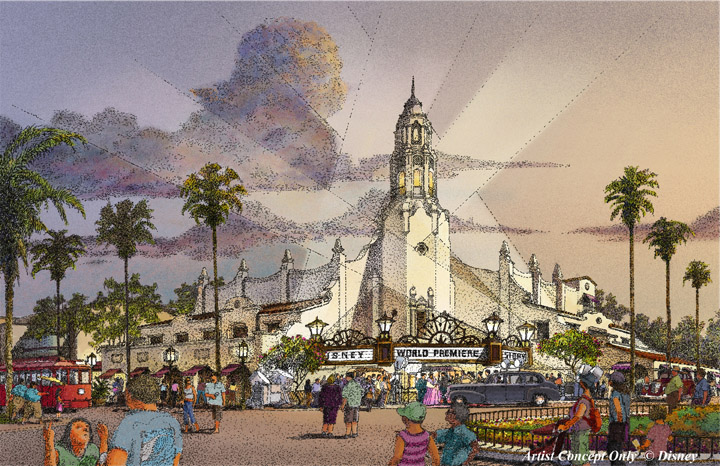 The totally new gateway to Disney’s California Adventure welcomes guests into an immersive world of historic California streets as Walt experienced them as a young artist arriving with big dreams.

A new visual icon in the tradition of Los Angeles, California’s great entertainment palaces will draw guests into the heart of the attractions. This new facility, which was inspired by Los Angeles’ historic Carthay Circle Theatre that premiered Snow White and the Seven Dwarfs in 1937, will house a next generation Walt Disney Story featuring an interactive tribute to Walt’s California experiences, and his entertainment legacy that continues world-wide today. Red Car trolleys reminiscent of the old Pacific Electric Railway will travel up and down the main street. New dining and shopping experiences and a slate of unique, live entertainment will bring energy to the Walt Disney Plaza.

Hollywood Pictures Backlot will be a new home for a slate of special ticketed events and chances to hear first hand from innovative directors, writers and animators. An update of the popular family show “Playhouse Disney” will provide an experience for younger children.

The “Golden State” area of the park will see the addition of numerous new dining opportunities tied to the incredible bounty of California’s farmland and its rich ethnically diverse food heritage. Food and wine festivals that celebrate the seasons, tastes and cultures of the dynamic communities of the Golden State will entertain guests, bringing unique one-of-a-kind experiences.

A Preview Center located on San Francisco Street in the Golden State region of the park will feature models, Imagineering concepts – giving park guests a sneak peek at the excitement that lies ahead. The Preview Center is scheduled to open in late 2008.

About the Disneyland Resort:

Located on approximately 500 acres in Anaheim, Calif., the Disneyland Resort includes the Disneyland and Disney’s California Adventure Parks, three hotels with approximately 2,200 rooms and the 310,000 square foot retail, restaurant and entertainment Downtown Disney District. With 20,000 employees, the Disneyland Resort is Orange County’s largest single-site employer and a $3.6 billion annual contributor to the local economy. In January 2004, the Resort welcomed its 500 millionth guest since opening on July 17, 1955.