Imagineer Bob Gurr was honored with a tribute window on Disneyland's Main Street U.S.A. in a private ceremony before park hours on March 7, 2008. Gurr was involved in the design of many popular Disneyland attractions, and is well known for his ride vehicle designs, starting with the Disneyland Autopia. In his Disney biography, Bob says "If it moves on wheels at Disneyland, I probably designed it." 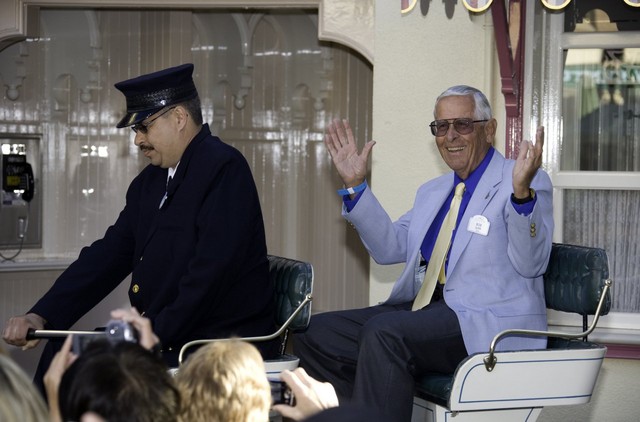 Leading the Race to the Future
Meteor Cycle Co.
Our vehicles pass the test of time 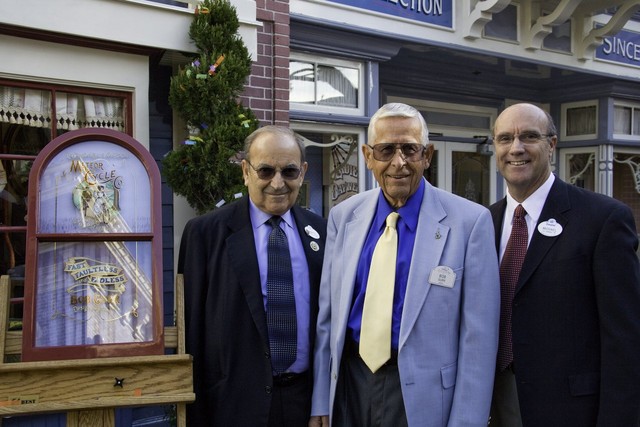 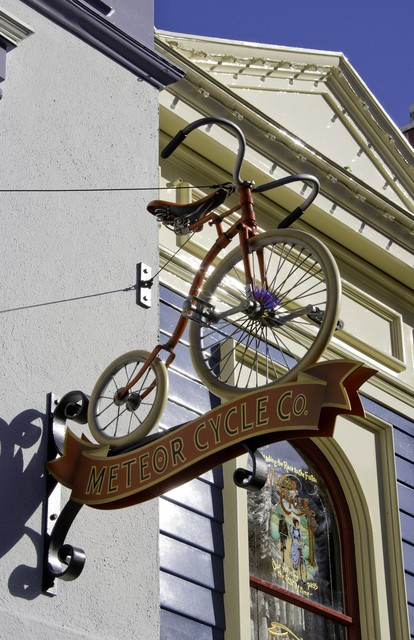 A sign next to the tribute window advertises the Meteor Cycle Co. Photo © Disney. 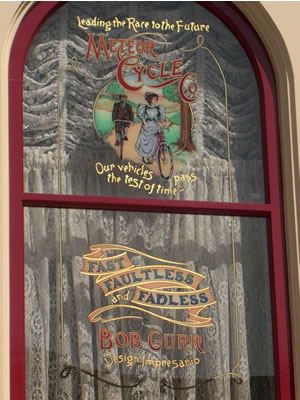 Disneyland's merchandise department has just released the schedule for a slate of merchandise events this summer. The summer events begin with the Alice in Wonderland 50th Anniversary Product Release & Signing on Saturday, May 24 at Disneyana on Main Street. The product release will feature artists Dave Avanzino, Robert Olszewski, Larry Nikolai and Michelle Valigura. 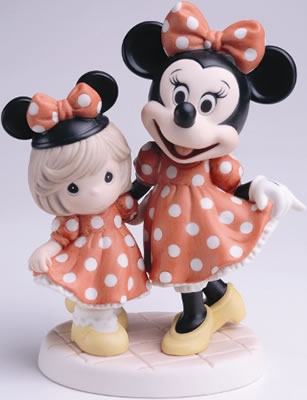 A new collection of Disney Precious Moments figurines is being released on June 4, 2008. Photo © Disney.

Precious Moments artist Hiko Maeda appears at Disneyland on Saturday, June 4 to sign a new collection of Precious Moments figurines featuring Disney characters. Hiko Maeda will be available at the China Closet on Main Street from 9 to 11 a.m., and again at the World of Disney store in Downtown Disney from 1 to 3 p.m. The collection includes the "Minnie and Me" figurine, shown above, a Disney theme parks exclusive. The initial offering of this piece will include a special debut-date bottom stamp. A limited number of the Minnie and Me sculptures with the debut-date bottom stamp will be available to order online. You can view the sculptures, and order the event exclusive piece, on the Disney Gallery Web site (link).

Disneyland's summer pin promotion is called "Mickey's Pin Odyssey." The promotion runs June 20 through August 10, and will includes themed pins and pin accessories, as well as the return of the popular pin trading carts. The carts will be open daily at these locations and times:

A kick-off event is planned for Saturday, June 21. The "Disney Day Campin' Event" will be held in the Festival Arena in Frontierland. Registration for the six-hour event is $25 per person, and includes pin trading, an "art of pin making" session, a signing opportunity with Disney artist Jeff Granito, a commemorative event T-shirt and pin and a coupon for 20% off Mickey's Pin Odyssey merchandise. Registration for the event opens April 1, 2008 (link). 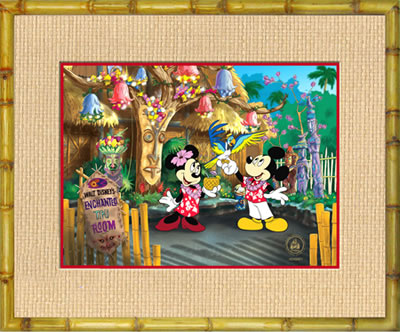 Disney celebrates the 45th anniversary of the Enchanted Tiki Room with a collection of attraction merchandise. Photo © Disney.

A Tiki Room-inspired animation cel will be offered for sale at the Disneyana store on Main Street from 8am - 11am the same morning. The cel is a Limited Editon of 1000, and is offered in four framing options from $95 to $250. If you can not attend the event in person, you can reserve a cel via Disneyland DelivEARS starting April 8 (link).

Disney Design Group Senior Character Artist Monty Maldovan is signing new Tiki Room pins at the Little Green Men Store Command shop in Tomorrowland from 8:30 to 10:30 a.m. Wristbands are required to purchase a pin during the signing, and will be distributed near the west esplanade information kiosk from 7 to 8:30 that morning. After that, wristbands will be available outside the Little Green Men Store Command shop while supplies last.

Some photographs of construction around Disney's California Adventure and the Disney's Vacation Club expansion at the Grand Californian Hotel. 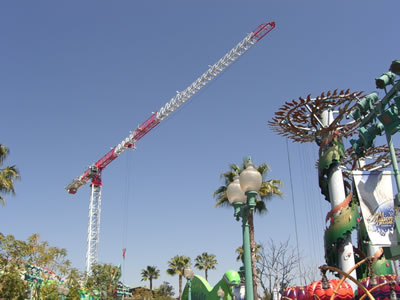 A crane from the DVC construction site looms over the Route 66 portion of Paradise Pier. Photo by Adrienne Vincent-Phoenix. 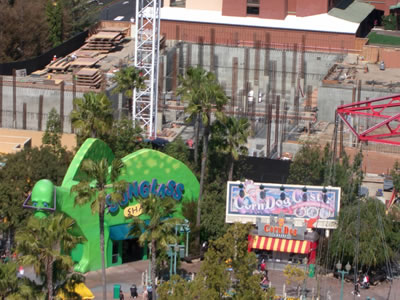 A shot from the Sun Wheel shows the foundation work on the DVC expansion of the Grand California Hotel. Photo by Adrienne Vincent-Phoenix. 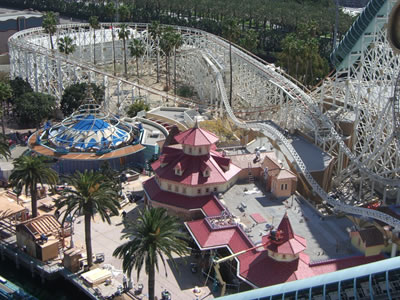 The path directly in front of the new Toy Story attraction is closed during construction. Photo by Adrienne Vincent-Phoenix.

Workers put the roof on structures across from the new attraction. Photo by Adrienne Vincent-Phoenix.

... The winners of the MousePlanet 101 Dalmatians contest are Alan Chisum of Simi Valley, CA and Joshua Woolf of Olympia, WA. Both won a character key set, designed especially for release of 101 Dalmatians: Platinum Edition DVD and signed by Lisa Davis (voice of Anita) and Alice Davis (wife of Marc Davis, Cruella's animator). Congratulations to Alan and Joshua, and thank you to everyone who entered the contest.

... Just a reminder, A "special Annual Passholder preview" of the Pixar Play Parade is scheduled for March 13 at 5:15 p.m. at Disney's California Adventure. Annual Passholders can also attend a preview of the new Playhouse Disney show on March 13th; just present your valid AP at showtime. 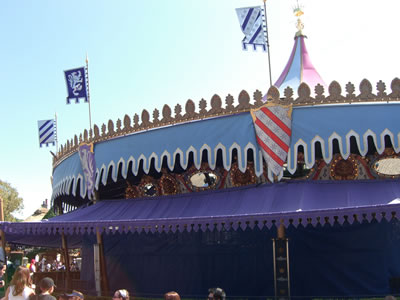 King Arthur Carrousel is expected to reopen on April 5. Photo by Adrienne Vincent-Phoenix.

... Gadget's Go Coaster, previously scheduled to be closed April 28 - May 22, has been removed from the current refurbishment schedule.

2008 UEA convention – October 16 & 17 (in Utah). Many Utah public schools close so teachers can attend the Utah Education Association convention, which creates a four-day weekend for the students. Expect the resort to be busy that weekend—some claim 'UEA' stands for 'Utah Escapes to Anaheim.'

Disney's Resort Magic and Good Neighbor Magic Packages – Package includes accomodations one of the three resort hotels or at one of 40 Good Neighbor hotels; Souvenir Park Hopper ticket with voucher for admission to Mickey's Toontown Morning Madness, plus one Magic Morning (early entry) for three-day or longer Park Hoppers; preferred seating at four DCA attractions (Disney's Aladdin – A Musical Spectacular, Muppet*Vision 3D, It's Tough to be a Bug!, Golden Dreams); Preferred Showing of Turtle Talk with Crush (Priority Viewing at the first Turtle Talk with Crush show of the day, on any one day – one voucher per Guest); Disney Dream coin keepsake (one per package), luggage tag and lanyard with pin; a Downtown Disney Fun Card; and a "Character Call" from Mickey, Minnie, Goofy or Crush. Contact Disney Travel or your favorite travel agent.

2008 "2 Days Free" offer – When you buy a 3-, 4- or 5-day Parkhopper ticket, Disney will add two free days. In other words, you'll pay the 3-day rate ($189) and receive a Parkhopper Bonus ticket good for five days. You can maximize your savings by taking advantage of the advance purchase discount, and pay just $169. The Parkhopper Bonus ticket includes one Early Entry admission. The ticket must be used for the first time on or before April 24 and expires 13 days after first use or on May 7, 2008, whichever occurs first.