Enchanted tells the story of Giselle (Amy Adams), a fairytale maiden from the land of Andalasia, who believes she has found her true love in dashing Prince Edward (James Marsden) and is scheduled to marry him "happily ever after." The prince’s evil step-mother Queen Narissa (Susan Sarandon), desperate to keep the young lovers apart and preserve her control of the throne, transports Giselle to the mystical land of New York City and into live-action territory. Giselle is rescued from the streets by jaded divorce attorney Robert (Patrick Dempsey), who is alternately horrified, mystified, and attracted to the would-be princess. True love triumphs, but not before some fantastic musical numbers and a big "evil queen-turns-into-a-talking-dragon" climax, a la Sleeping Beauty, a film (among many other Disney classics) Enchanted pays homage to.

Enchanted did great at the box office and was well received by most critics. The performance of the adorable Amy Adams did much to keep the film from sinking into gooey mush, as did the lively music from Alan Menken and Stephen Swartz. Animated characters can break into song and dance with little notice these days, but it’s harder to have the same sorts of scenes with real actors without the audience cringing in embarrassment. Adams made it all look effortless, as did the ever-musical Marsden. Enchanted appeals to kids who wonder what Snow White would do if she ever found herself with a nice pair of drapes and a few pigeon friends; and to grown-ups who secretly want to believe that true love conquers even those nagging problems, like a potential mother-in-law who is trying to poison you with a deadly caramel apple.

Fans of classic Disney animation are especially enamored of Enchanted, as the filmmakers make special efforts to pay tribute to past films like Sleeping Beauty, Snow White, and Cinderella in small details. Former Disney leading ladies Jodi Benson, Paige O’Hara, Judy Kuhn, and Julie Andrews all have cameo roles, and many iconic images play important parts in the film. Poison apples figure heavily in the climax of the film, as does true love’s kiss, though not from the traditional prince as in past Disney films. The only part of the film I did not care for was the transformation of Narissa into the dragon and the action-heavy climax. The dragon is so obviously computer generated that it removes any sense of real peril, and makes a whole lot of noise to little effect. Sarandon is much better used when she is in her live-action evil queen mode. 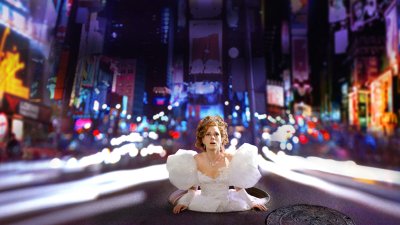 This is a series of three short featurettes concentrating on the big production numbers in the film: the Happy Working Song and That’s How You Know musical scenes and the climax scenes of the film which are set in the ballroom and on the spire of a high-rise overlooking the city. Since these are the only extras concentrating on the making of the film, I was disappointed to see they only skimmed the surface of how Enchanted was created. A big part of the featurette for Happy Working Song was focused on the live animal work done on-set combined with the computer animation needed to finish the scene. I did enjoy seeing the storyboards for the musical numbers and how they progressed from rehearsal hall to actually filming in New York, but I was left wanting to hear more from the actors, costumers, stunt doubles, production designers… everyone who had a hand in the making of the film. They must be holding their best material for a special edition release.

Director Kevin Lima introduces each deleted scene with an explanation of why the particular scene was cut. Most of the scenes are written for character development and Lima cut them because he felt he wanted to move the action along more quickly. There are some nice moments from the supporting actors in these scenes.

Video – Ever Ever After Carrie Underwood

Most of us have seen Underwood’s video on the Disney Channel ad nauseum, but I’ll admit—it’s a nice song, and a sweet video. Who doesn’t want to see a country star become animated and sing with chipmunks?

Okay, blech. The weakest extra on the DVD is a sickly sweet “pop up” version of a little short story about Pip apparently made on a $50 budget from the looks of the animation quality. I had visions of the Playhouse Disney show "My Friends Tigger and Pooh" while watching this feature. And not good visions.

The DVD gave a little preview of the Blu-ray extra, which focuses on the hidden references to classic Disney films. If viewers spot the references during the film and click on them, they are routed to short featurettes showing the original Disney reference. Viewers who spot a good number of the references are treated to three extra videos: “So Close,” Making Ever Ever After” and “True Love’s Kiss.” I can do without the extra videos, but I would have loved to see all the references at the touch of a button while the film was playing. Time to start saving up for a Blu-ray player, I suppose. 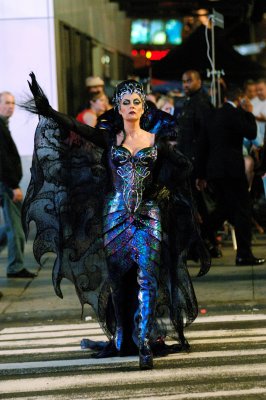 The film is presented in 1.85 : 1 aspect ratio for the animated segment, then switches to 2.35 : 1 for the live-action remainder, and looks marvelous on the small screen. The 5.1 Dolby Digital Surround Sound is crisp and clean, especially in the musical numbers. The interface is short and workmanlike, with a quick animation of Giselle falling into the well and the menu presented with New York City signs along with music from the movie

I was disappointed with the lack of in-depth extras on this first DVD release of Enchanted. So much went into the production of this film that even a director’s commentary would have been an important addition to the bonus features. I suspect they are holding back extra material for a special edition release at sometime in the future; but don’t wait for it. Enchanted is such an enjoyable movie on its own it is worth owning, with or without amazing special features.