This time we head West for some really wonderful magical memories of some very special Disneyland Resort cast members.

I was at Disneyland last October for Gay Days Anaheim, and I had a cool Magical Moment that I wanted to share with you.

A few hours later, I was in line at the Tower of Terror and started talking to the family in front of me: a father, a mother, and their young son (I'm guessing maybe 5 or 6 years old). The son was sadly eyeing my mouse ears, and the father explained that they had seen the Dream Squad giving them out earlier that day, but they had gotten there just as the Squad had run out. I immediately took off the mouse ears, crouched down so I was eye level with the son, and asked him if he'd like them.

The son's face lit up, and I happily handed them over. The father started to protest—he didn't want me to think that he'd been hinting that I give them to his son—but I explained that the ears didn't mean much to me at all, and they clearly had just made their son incredibly happy, so all was good in my book.

We rode the Tower of Terror, and at the end, the cast member who was waiting for us gave the usual "please collect your belongings and exit to your right" speech in his best Tower of Terror monotone. But then he pointed at me and said, "Everyone except for you, sir. You need to come with me."

There was a bit of laughter at that, and one of the other riders suggested that I was in trouble for having screamed too loudly during the ride.

I followed the cast member down the hall, and when we turned a corner and were out of sight of the other guests, he shifted out of character and smiled at me. He explained that he had seen me give my Year of a Million Dreams ears to the young boy, and he wanted to thank me for doing so. He even called it a Take Five, which (thanks to Mike's stories on the Podcast about his days as a cast member) I already knew all about. He shook my hand and told me that I had acted in "the true Disney spirit," and then he reached into his jacket and pulled out a set of Year of a Million Dreams Dream Fastpasses for me.

I thanked him profusely, shook his hand again, made sure I had his name written down so I could file a thank-you report at Guest Relations, and then went on my way.

I was so happy for the rest of the day that I was practically skipping. That cast member (his name was Christopher) didn't have to do what he did. I have no idea how he got a Dream Fastpass lanyard to give me, because I'd always thought that those had to come from the Dream Squad. And he certainly didn't have to go out of his way to walk me around a corner so he could talk to me out of character. But by Taking Five in the way he did, he reminded me what it means to behave, in his words, "in the true Disney spirit."

My family (my wife, three kids and I) love watching Billy Hill and the Hillbillies.

Many years ago, we were walking down Frontierland and, for some reason, The Billies were playing outside of the Golden Horseshoe on the wooden walkway. The "real" front man Billy was there. We rushed over to watch.

Front man Billy began to play around with my middle son. My middle son was squatting to watch the show. Front man Billy squatted with him and went into a prolonged speech about how squatting was the proper way to watch a show on the front porch. He then took my son up to play spoon rhythm on the washboard for their next song.

He counted off for my son to play, and my son began to beat a slow and methodical beat that was not even close to the count off. Front man Billy looked at him and began to laugh. Instead of stopping him, he began to play "Smoke on the Water" to my son's rhythm. The other Billy's fell right in, laughing. They did a full country-folk version of the song, to my son's slow beat. Everyone was laughing hysterically: the band, the crowd, my family.

My son was very serious and kept up the rhythm for the entire song.

It was sweet, funny and unexpected.

Many people ask why we "keep going back" to Disneyland. Isn't always the same?"

I just wanted to share a story about the nicest thing a stranger has done for us. I believe it epitomizes the down-home attitude that Walt envisioned for Main Street and also characterizes that Disney magic that we all need in this day and age. My boyfriend and I got engaged at Disneyland last November 17 (the night of our seventh anniversary).

We spent the week at the resort to celebrate and made name badges for ourselves (the kind the cast members wear) that read "engaged" since City Hall only had "Just Married" badges. Most of the week, the badges went ignored except for a few cast members here and there that wished us well and congratulated us.

On November 23, the final night of our vacation, we made dinner reservations at the Carnation Cafe for 4 p.m. We were seated and our server, Elena, quickly took our order. She also noticed our badges and congratulated us and asked us how it happened. We told her our story and she seemed to be touched by it and shared that she was also recently engaged and we began to talk about weddings and life circumstances that were preventing us from going forth with dream weddings.

She disappeared for a very long time after we were served and we were both in need of refills. She finally appeared and asked us if we liked chocolate cake, to which we answered yes and she presented us with a beautiful slice of cake and a hand-made note that she had obviously made to congratulate us. She also came back with "Just Married" badges and with "Just Engaged" buttons, which she had obviously doctored from the "Just Married" buttons.

We were so taken aback by the magical gesture and by the overwhelming kindness that this stranger exhibited toward us. Neither one of us had family near so to have a perfect stranger go out of her way to really celebrate us was truly outstanding and provided us with the perfect book-end to our week-long trip.

Elena not only made us feel welcome and special like she was celebrating the engagement of life-long friends, but she also did the same for a birthday girl two tables down from us as she led the entire restaurant into a rendition of "Happy Birthday" for her.

It is people like this that really adds that Disney magical touch to important life events and I just wanted to share this story to not only thank Elena for her awesome gesture but to hopefully inspire others to highlight exceptional people at the parks. 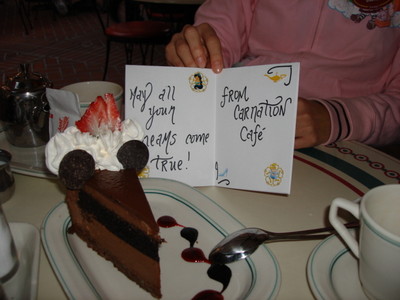 My wife and I just returned from Disneyland and I would like to share a magical moment we had.

We had just gotten into the park, and stopped by the Carnation Cafe for lunch. I noticed that Chef Oscar was visiting tables. And sure enough, he stopped by our table and visited for about five minutes. Chef Oscar is one of the best things about the Carnation Cafe. Almost every time we eat there he is out meeting and greeting the diners. When we have or grandkids with us, he always visits with them.

I believe he has been a cast member for more than 30 years. And it is always a magical moment to see him.

In 2005, my sister, best friend and I went to the Disneyland Resort. One day of our trip we had the honor of meeting the cutest Prince Phillip with the biggest dimples you've ever seen. We, being three young ladies in our early 20s, were instantly smitten, and the fact that he was about our age encouraged some "Go for it girls!" comments from the mothers in line behind us. The very next day we were in DCA, in Off the Page looking at the merchandise, when I saw a few characters stroll through the store to get to the big center room of the Animation Building, one of them being Hercules.

We had not yet met Hercules so I instantly grabbed my girls and we made our way after him. While we were waiting in the mob/line to get our pix with Herc I noticed some awfully familiar dimples! I quietly mentioned to my girls that I thought this guy was the same one who was Phillip the day before, they weren't too sure until we got closer.

When my friend was sidled up next to Herc for her pic with him I, behind the camera, said to Hercules, "You look aaawfully familiar."
He smiled (with those dimples!), chuckled a little, and said, "So do you!"

After we all had gotten our pictures with "Prince Herc," as we came to call him, we thanked him and he said, "It was nice to see you again, for the first time."
Needless to say, this made our trip! We were thrilled that he acknowledged seeing us before (as a different character) in an inside-joke way that didn't totally break character (something we know that no one does at DL, not even if no one else is around and you ask them a serious question).

This happened about five years ago when I was taking a picture with Aladdin and Jasmine outside the Aladdin's Oasis in Disneyland. The cast member playing Aladdin was awesome and even started singing "Every Breath You Take" by the Police while me and my friend were talking to them. It was the funniest thing ever.

The next time I went back to Disneyland was three years later and in going back to Aladdin's Oasis I saw the same cast member. I didn't think he would remember me (since it had been three years) so I didn't say anything but as soon as he saw me he said, "Weren't you just here a few months ago?"

When I said no it was longer he was shocked and even remembered the hat I had worn that day. Just knowing that this cast member remembered me from three years previously made me feel extra special, sadly I didn't get his name, but hopefully by the look on my face he knew that he had made my day and I just thought I would share.

A Final Thought From Michelle Masters:

I just love the cast member stories. They always make me cry and brighten my day. It brings a little of that Disney magic into my most mundane days. I'm going to Disneyland this weekend where the magic will be live and in person.