Oliver Martin "Ollie" Johnston Jr., the last living member of Disney Animation’s "Nine Old Men," passed away Monday, April 14, 2008 at the age of 95 in Sequim, Washington. He had moved to a long-term care facility there in 2005 to be near his immediate family. Johnston's long career as an artist, animator and author included 43 years at the Walt Disney Studios as an animator and directing animator. 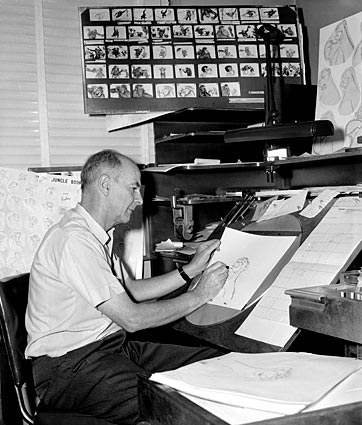 Ollie Johnston was one of the pioneers in developing and championing the distinctive Disney style of animation known as the "Illusion of Life." The illusion of a cartoon figure "coming to life" on the movie screen came about from the entire creative process, from the initial rough drawings of a character to the music and sounds effects accompanying the final animation sequences.

Johnston was most noted for his ability to add humor, sensitivity, sincerity, and emotion to animated sequences. Examples of some of his most memorable work include the heartbreaking scene of Bambi’s mother being shot by a hunter, Pinocchio’s nose growing when he lied, and the exuberance of Baloo performing "The Bare Necessities" in The Jungle Book. Johnston's technique was described by some as "kissing the paper"—it was if the pencil barely kissed the paper in order to coax the drawn characters to life.

Johnston was born in Palo Alto, California on October 31, 1912. Showing artistic aptitutde in his childhood and teens, it was at Stanford University, where he enrolled as an art major, that he met fellow student (and future Disney master animator) Frank Thomas—and thus began a friendship that lasted until Thomas' death in 2004.

During his senior year in college, Johnston left Stanford for Los Angeles to study with Pruett Carter at the Chouinard Art Institute. When Carter left teaching in 1934, Johnston went looking for work as an artist at the Walt Disney Studios on Hyperion Avenue in Los Angeles. In January 1935, after only a week of training, Johnston began working at the studio.

Johnston was initially assigned to work as an in-betweener, creating the transitional drawings that show a character changing from one position to another. His first assignment was on "Mickey's Garden." Not long after, he was promoted to apprentice animator and worked on cartoons such as "Pluto's Judgment Day" and "Mickey's Rival." Other cartoon shorts included "Little Hiawatha," "More Kittens," "Two-Gun Mickey," "Brave Little Tailor," "Mickey's Surprise Party," "The Practical Pig," and "The Pointer." 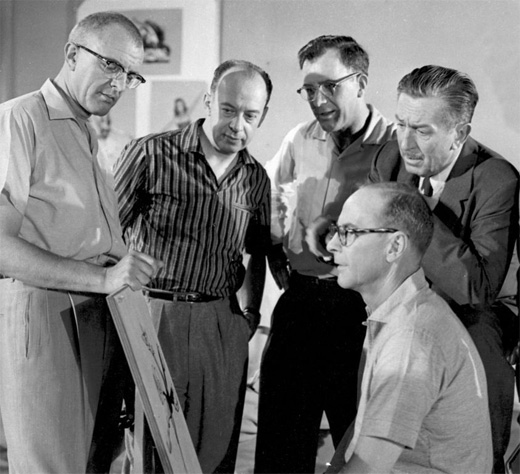 Eventually, he was assigned to work on the feature film Snow White and the Seven Dwarfs, and continued to work on nearly all the full-length films for the studio thereafter. In 1946, Johnston was elevated to directing animator on Song of the South and served in that capacity until his retirement in 1978.

During the 1940s, Walt Disney created an animation board to oversee division of work at the studio, and in 1950, the board included nine veteran animators: Les Clark, Marc Davis, Ollie Johnston, Milt Kahl, Ward Kimball, Eric Larson, John Lounsbery, Woolie Reitherman and Frank Thomas. Disney jokingly nicknamed them the "Nine Old Men" after the nine judges then sitting on the U.S. Supreme Court. 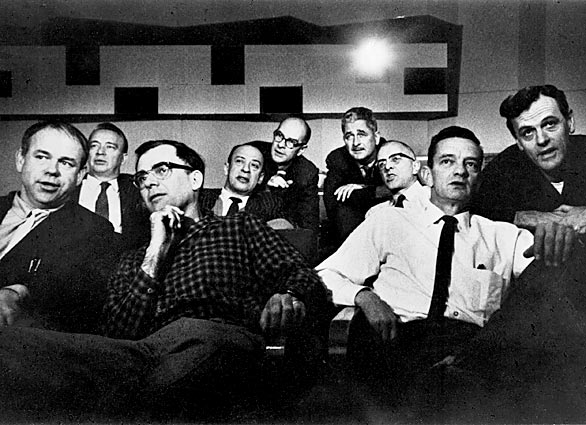 Johnston's animation resumé included some of the most memorable characters in animation history: 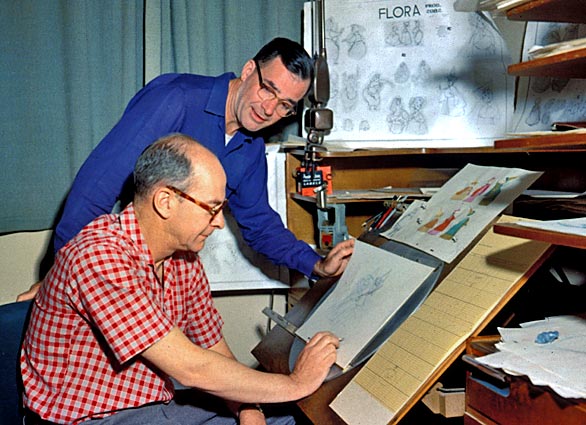 Upon retirement, Johnston and Frank Thomas embarked on an ambitious project: Detailing the creation of animation at the Walt Disney Studios in their definitive work, The Illusion of Life: Disney Animation (1981). Considered the bible of animation, the book carefully outlines the guiding principles and many examples of the art of Disney animation.

Many consider this book responsible for the renaissance of the art of handdrawn animation in the 1980s and 1990s. At the end of his career at Disney, Johnston was passionate about mentoring the next generation of artists and animators; the care he put into teaching others was fully developed and realized in The Illusion of Life. 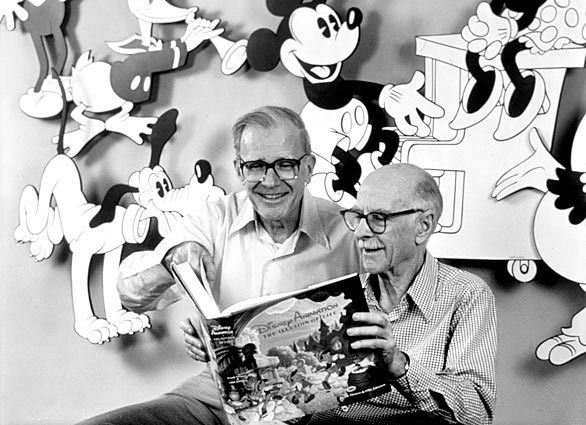 Johnston and Thomas wrote and published three other books:

Johnston received much recognition and awards for his contributions to animation, and was inducted as a Disney Legend in 1989.

In 1995, Frank Thomas' son and daughter-in-law, Theodore and Kuniko Okubo released the documentary Frank and Ollie: Drawn Together. In 2003, Johnston and Thomas were honored by a special tribute to them by the Academy of Motion Picture Arts and Sciences where the film was the subject of the eighth Marc Davis Lecture on Animation.

Additionally, Johnston received a National Medal of Arts from President George W. Bush in a White House ceremony in 2005, the first animator to be the recipient of that award.

Johnston's enthusiasm for life also extended to his great love of trains. Not only did he have a hand-built miniature railroad in his backyard home in Flintridge, California, he also had a full-size antique locomotive christened the Marie E. (after his wife) at his vacation home in Julian, California.

The locomotive was eventually purchased by Pixar's John Lasseter, who thought it might be nice if Johnston had one more ride on his beloved train before it was transferred up to Northern California. In May 2005, Lasseter arranged for the train to be moved to Disneyland, and had Johnston come to the park on the pretext that he would be receiving a railroading award. When Johnston arrived, he was surprised by the train waiting for him at the station, and was able to take that last ride on the locomotive. 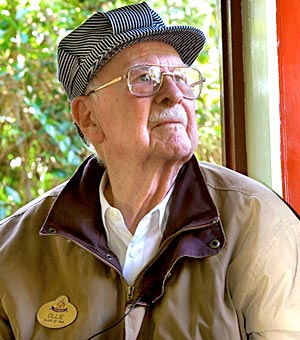 Johnston was passionate about his work but he also had a sly wit and a deprecating sense of humor, evidenced by his drawing of two Disney animated characters: Rufus the elderly cat in The Rescuers and the bumbling Mr. Smee in Peter Pan, both said to be caricatures of himself. 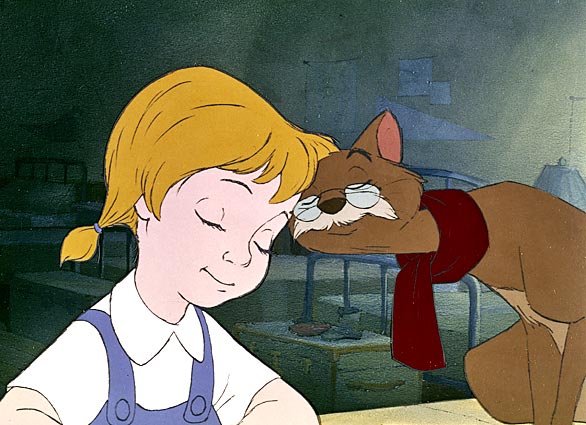 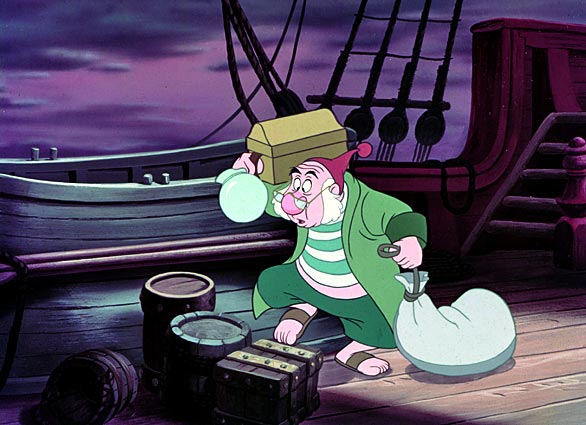 Johnston was highly revered by the younger animators following in his footsteps, and tribute was affectionately paid to him and Frank Thomas by being included as characters in later animated films: the villain "Dr. Frankenollie" in the 1995 Disney featurette Runaway Brain, cameos as train engineers in the Brad Bird animated feature, The Iron Giant, and more recently, in Pixar’s The Incredibles. 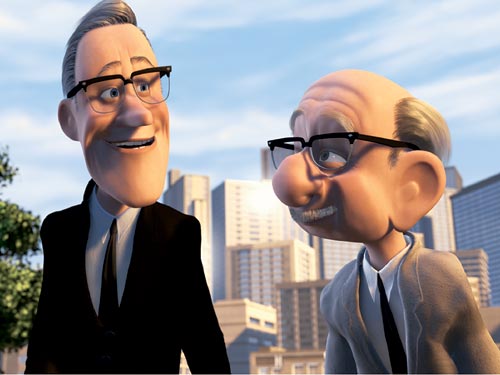 But Johnston lives on in other tributes as well. Many of the animators responsible for the second "golden age of animation" were either trained directly or indirectly by Johnston and Thomas. The attention to detail seen in such Disney films such as The Little Mermaid, Aladdin, The Lion King, and others were possible because of the groundwork laid by Thomas and the others who comprised the Nine Old Men of the early Disney classics.

Some mourn the loss of Johnston because he represents the end of the era—a feeling that "we won't see the likes of an artist like him again." And it's true, he represents one of the last direct links to Walt Disney and the insistence that quality and creativity not be sacrificed on the altar of financial constraints. However, there are animated films being created today that are worthy of the title "Disney classic," whether or not those films are created under the Disney banner or somewhere else.

As long as the next generation of artists and animators are passionate about their craft and of telling a story that speaks to the heart, then the era of the Nine Old Men is not over, and animation will continue to delight and enchant the coming generations.

Johnston's beloved wife of 63 years, Marie Worthey, passed away in May 2005. He is survived by his two sons: Ken Johnston and his wife Carolyn, and Rick Johnston and his wife Teya Priest Johnston. Funeral services will be private. The family requests that instead of flowers, donations be made to CalArts (calarts.com), the World Wildlife Fund (worldwildlife.org), or the National Resources Defense Council (nrdc.org). The Walt Disney Studios is planning a life celebration with details to be announced later. Additionally, the Carolwood Pacific Historical Society has scheduled a special celebration of his life and the dedication of his Victorian Train Depot (donated by the Johnston family to the Society) now located near Walt's Barn at Griffith Park in Los Angeles, California on May 18, 2008 at 1:00 p.m.

Additional information on the history of Disney animation and the principles of the "Illusion of Life" can be found in the MousePlanet article about Johnston’s animation partner, Frank Thomas (link).

Finally, Johnston and Thomas maintained their own Web site (link), which includes a listing of all of the films they've worked on, biographies, animation tips, plus several downloadable Quicktime movies where they discuss Disney animation.