Marching along... into oblivion

The end of an era is at hand, as after 19 years of being the nighttime place to be at Walt Disney World, Pleasure Island on September 27 closes its six remaining nightclubs of the Adventurer's Club, Comedy Warehouse, 8Trax, Mannequins Dance Palace, BET SoundStage Club, and Motion. In their place will be... more stores and restaurants.

"Our guests tell us they want additional shopping and dining experiences at Downtown Disney," stated Downtown Disney Vice President Kevin Lansberry in a press release. "We are currently considering a number of unique concepts from around the globe as we re-imagine Pleasure Island and look forward to sharing our progress over the coming months."

While it's unclear whether the demise of Pleasure Island is partly due to its location, the fact that it was the easiest way to get between the Marketplace and the West Side surely didn't help. Foot traffic between the two more family-friendly areas was likely part of the reason that Disney changed the admission policy at the Island from hard-ticketed location to all-access with only the clubs requiring admission. An attempt at competition with Universal CityWalk was likely another reason for the change.

Regardless of the reason, many Pleasure Island aficionados focus on that policy change as the beginning of the end for the Island. With the loss of the exclusivity, the adult-orientation of the street parties, and the growing groups of local teens using the streets of the Island as a substitute for hanging out at the mall, the future grew increasingly dark for the entertainment district.

The difficulties grew with the population of local teens, as their presence made tourists feel more and more uncomfortable, leading to a crackdown on gang-related activities last summer. Fans continued to note the "De-Evolution of Downtown Disney," as we dubbed it on a MouseStation Podcast earlier this year.

So now Pleasure Island will undergo an extreme makeover of its own. As of press time, it is unknown whether any of the buildings will survive the transition, which will take place over the next two years. However, we do have a list of what is officially planned so far. While the clubs will close, other locations on Pleasure Island, including Raglan Road, Fuego by Sosa Cigars, Curl by Sammy Duval, Orlando Harley-Davidson and outdoor food and beverage locations, will remain open.

A giant, tethered balloon will take guests 300 feet into the air to view Walt Disney World from above. An image distributed by Walt Disney World depicts the PanoraMagique balloon from Disneyland Paris, so it's probably safe to assume that this attraction will be another Aerophile Aero30NG balloon. 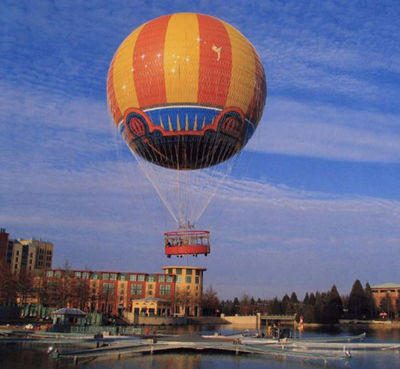 As we already knew, T-Rex: A Prehistoric Family Adventure will open this fall. Note that it's now just "T-Rex," and not "T-Rex Cafe." The restaurant featuring life-size animated dinosaurs, geysers, waterfalls and a fossil dig site is located just outside the eastern entrance to Pleasure Island, and will serve pizzas, pastas, seafood and more. 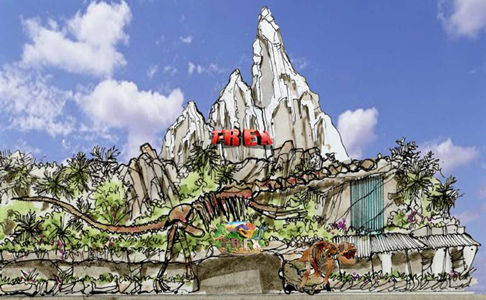 T-Rex is scheduled to open outside the east entrance to Pleasure Island this fall. Image © Disney.

Also this fall, those who are looking to design their own T-shirt will be able to do so at a new store from Hanes. This new location builds on the "design your own souvenir" trend that seems to be building at the resort. 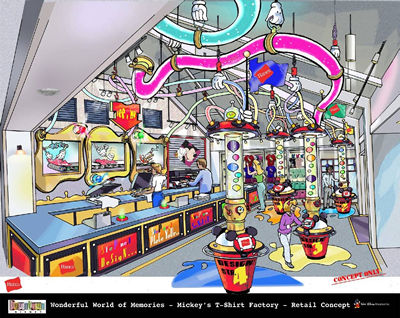 "Wonderful World of Memories - Mickey's T-Shirt Factory" is expected to provide opportunities to design your own T-shirts this fall, courtesy of Hanes. Image © Disney.

La Dolbe, a new restaurant concept from E-brands Restaurants will open next spring on the site that is currently occupied by Motion. Featuring authentic Central and South American cuisine, it will also present live music along the waterfront. 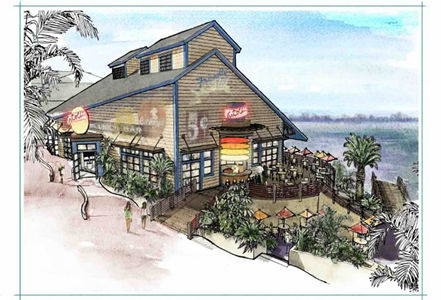 Motion will be replaced by La Dolbe next spring. Image © Disney.

This summer will mark the beginning of the conversion of the Portobello Yacht Club to a Tuscan Country Trattoria, featuring authentic Italian dishes and signature favorites. The interior will be redesigned and an outdoor dining area will be added. 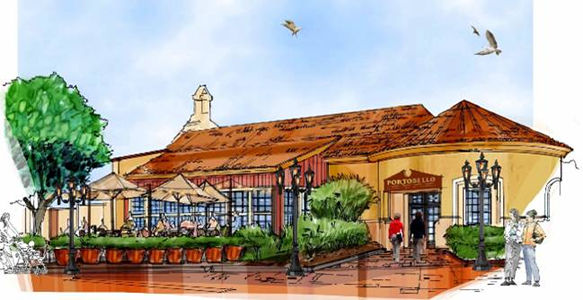 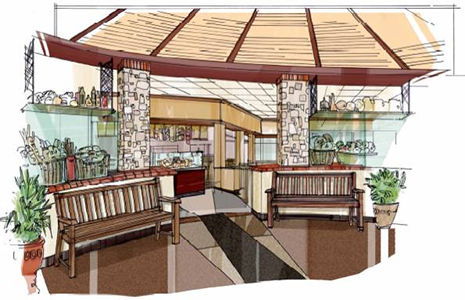 The restaurant's interior will get a complete makeover, as well. Image © Disney.

Fulton's Crab House will get a fixing-up next spring. The third-floor dining area will be refreshed to allow for larger private parties and the rest of the former Empress Lilly will get updated fixtures, furnishings and exterior. 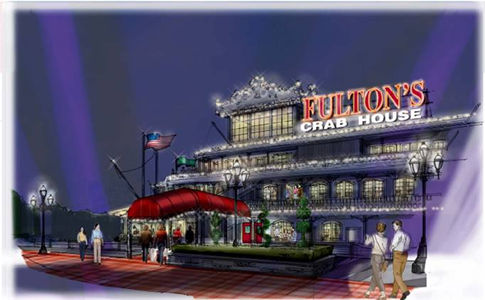 Fulton's will have some work of its own done next spring. Image © Disney.

Off of the Island, the Marketplace Stage will be replaced with a larger, covered stage this fall. In addition to blocking more of the view of the lake, it will provide a new "premier venue" for Disney's Magic Music Days. Elsewhere at the Marketplace, Goofy's Candy Company will add a special new room to host birthday parties. 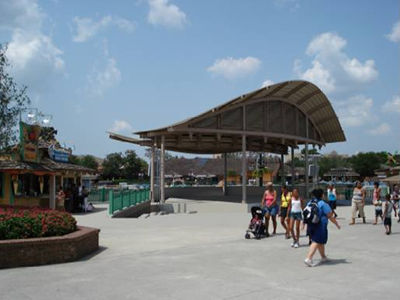 This conceptualized view of the new Marketplace Dock stage shows that the current "stepped" area will be flattened out. Image © Disney. 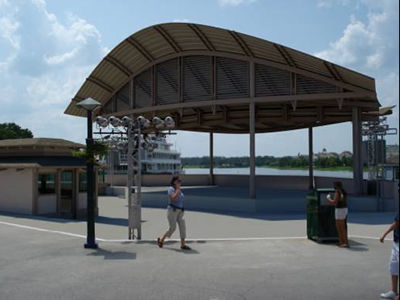 The stage will block a portion of the view of Village Lake. Image © Disney. 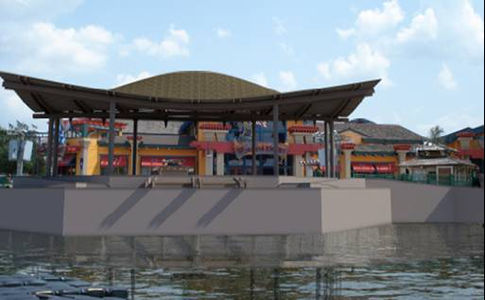 The stage is located across from the World of Disney store. Image © Disney.

Over on the West Side, Wolfgang Puck Cafe will get an upgrade next year, with new interior fixtures and furnishings as well as en enclosed glass patio.

We're still awaiting to hear from Disney on the many questions that we've asked, including effect of the proposed changes on the Water Park Fun & More park pass option, other future nightlife options and whether or not the buildings will be torn down and replaced. Once we receive those answers, they'll appear in my blog, a MousePlanetWatch Disney News episode of the MouseStation Podcast (which airs on Thursdays) and in a future Walt Disney World Park Update.

For some of my personal thoughts, check out my blog post on the closing. Will you now leave Disney property to go to Universal CityWalk or head to the revitalized Church Street Station? You can also join the discussion of the demise of the place where you could once "Carpe Noctem" with Mac 2-Nite on our MousePad discussion forums.

As I reported in my blog last Thursday, new discounts have been announced for most nights August 3 - September 27. To get these rates, you must book by July 27.

Here are some sample rates:

To get the rates, use the following codes:

Thanks to Sue Pisaturo of MousePlanet sponsor Small World Vacations for the info!

The 15% gratuity added to bar, beverage, wine and deck service remains the same.

Osceola County Sheriff's detectives are working with the Occupational Safety and Health Administration officials to investigate the death of a Disney employee who was injured while working on a high-lift vehicle at the All-Star Music Resort on June 13. John Swearingen, 52, was apparently pinned against something at the job site, causing chest, neck and head injuries. He was airlifted to Orlando Regional Medical Center with life-threatening injuries and died last Thursday. Deputies indicate that the death appears to be accidental.

Speedway hybrid car back on hold

Three weeks ago, we reported that the new hybrid car for the Tomorrowland Speedway was getting ready to go out on the track for final clearance and live testing with guests. On Tuesday, it made a very short appearance, then it quit running and the mechanics had to go out and get it. The car is apparently once again on indefinite hold.

Meanwhile, our source notes that the new fuel tank and fueling system reported on in last week's construction update is likely just a new underground fuel tank and pumps for the existing pit area, as the current equipment is over 30 years old.

…Last Thursday at Disney's Hollywood Studios, the theme park's Prince Caspian character rode in on a horse to open the new Journey Into Narnia: Prince Caspian soundstage attraction. Warwick Davis, who plays the evil dwarf Nikabrik in the Prince Caspian movie, was in town to act as host for Star Wars Weekends and joined the festivities. The new attraction features Narnia trivia in the queue, then an optional meet-and-greet with Prince Caspian in front of a "Dancing Lawn" backdrop before heading into the soundstage. After a narration from director Andrew Adamson, guests then pass through a "stone" archway that leads to the underground vault holding Aslan's stone table. Props and costumes from the movie are also on display.

…The Australian city of Melbourne is in the running to be featured as one of four featured "great food cities" at this year's Epcot International Food & Wine Festival, according to a story in the Melbourne Leader. Other frontrunners include New Orleans, Copenhagen and Rio de Janeiro.

…The Expedition Everest Challenge is now 65 percent sold out, and the Walt Disney World Marathon is now 70 percent full, both 5 percentage points closer to closure than last week.

…The Great Wheel Corporation has announced that it will begin construction on the Great Orlando Wheel, a 400-foot-tall "observation wheel" that will feature 25-mile views in each direction. The Wheel, scheduled to open in 2010, will sit next to the Orlando-Orange County Convention Center. Many of the same companies responsible for the London Eye are involved in the creation of the various parts of Orlando's wheel.

Passholder rates are available for the summer. You can book both room-only and Disney Dining Plan packages. Rates are valid for stays with a check-in date between May 26 and August 2, and can be booked from now through the date of arrival.

The booking codes for phone reservations are:

Note that Small World agents have run into difficulty with the ADS code for phone reservations with dining, but have found an alternate code to use. If the code doesn't work for you, try code CSS.

The booking codes for online reservations are: