Last week, Disney announced the lineup for next year's Adventures by Disney itineraries, including eight new destinations. Fifteen trips will also return, for a total of 23 different itineraries for 2009.

The eight new itineraries are:

In addition, Disney is introducing Disney Signature Trips on two of its itineraries this year. On specified departure dates on the Safari to South Africa and Golden Path to Yosemite itineraries, travelers get upgraded accommodations, special amenties and special events not available on standard dates for those tours.

"In 2009, we will continue to be innovators in the family and group travel business. By offering 23 destinations, we are giving our guests the opportunity to enjoy authentic experiences and magical moments only Disney could create in more places than ever before," said Ed Baklor, senior vice President, Adventures by Disney. "Wherever we go, two specially trained Adventure Guides, along with a host of local experts, allow families to see, hear, touch and taste the history and cultures of destinations around the globe and in our own backyard." 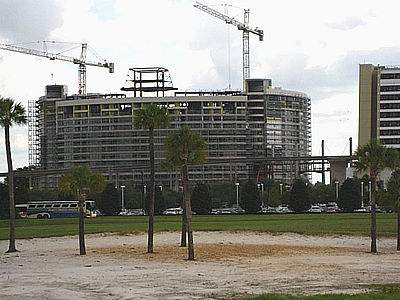 The rankings were determined by readers, who were asked to rate cruise lines on cabins, food, service, itineraries, destinations, activities and value.

"We are delighted to be recognized in the Travel + Leisure magazine '2008 World's Best' awards as one of the top three large-ship cruise lines and the highest ranked cruise line catering to the family market," said Tom McAlpin, President of Disney Cruise Line. "This recognition further enhances our position as the best cruise line for an unparalleled family vacation and motivates us to continue to elevate the Disney Cruise Line experience even higher."

As, it seems, with every year, Universal Orlando joined Walt Disney World in its annual price hike. On Wednesday, the resort also raised its one-day, one-park pass from $71 to $75. Many of their other ticket prices jumped as well, though some deep discounts remain in place, such as the Internet-only deals on a one-day park hopper for Florida residents and two-park annual passes for all guests.

SeaWorld Orlando, which also used to make price hikes with the other parks, has now decided not to participate in the arms race. Instead, their one-day, one-park pass still costs $69.95 per person. The Busch Entertainment park also offers many combination tickets, including offers with the Aquatica water park and the Discovery Cove up-close-and-personal experience park. 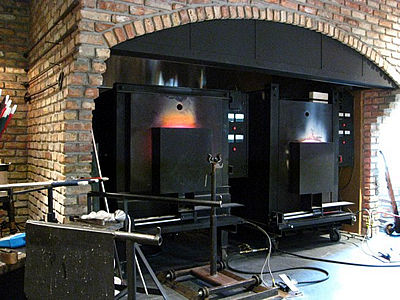 A kiln heats glass for a Murano glass blowing demonstration at Crystal Arts on Main Street, U.S.A. in the Magic Kingdom. Photo by Brian Warneke. 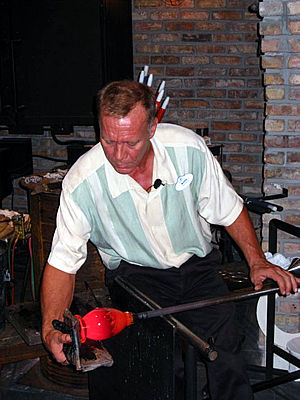 An artisan works the glass during the demonstration. Photo by Brian Warneke.

Fans of the local watering hole called the Big Bamboo Lounge were disheartened when the hangout for Disney cast members and Imagineers was demolished after a long decline including severe hurricane damage, rot, looters, squatters and a fire. However, some never gave up on recreating the place, and now some seem to have done just that, according to a story in the Orlando Sentinel (link). Led by Steen Laurieson, a group of former 'Boo denizens have opened the Nu Bamboo Lounge in the back bar room of the Carefree Inn & Suites (map link) in Kissimmee, right across the street from the former location of the 'Boo.

The place is already decorated with Disney nametags and memorabilia including seats from Test Track. The new dive apparently already has gained the feel of the old dive, even though it hasn't held its grand opening yet, but it will be interesting to find out whether the crowds of Disney folks "return" to the Nu 'Boo to honor the old place.

We had reported last week that the Disney Dreams Come True Parade would run twice each day from August 15 to 29 while the Liberty Square bridge is under repair and the SpectroMagic Parade would not be running. We noted that we believed that the parade would travel up from the Main Street Firehouse gate through to the Mickey's Toontown Fair entrance gate during the 3:00 showing and return to the Firehouse game during its 7:00 showing. According to cast members, the parade will actually leave the Firehouse gate, go up to the hub, turn around there and come back down Main Street, leaving back through the Firehouse gate. Apparently, the parade's floats won't fit through the narrow pathways and sharp turns necessary to get past the Mad Tea Party and there's not really enough room to get the floats turned around onced they get through the gate.

With the parade essentially making a U-turn around the rotary of the hub, there won't be enough room for all of the floats to participate in the parade, as the last float will have to be in the hub before the first float can start back up Main Street. Expect perhaps three or four floats, tops, as they try this little rolling circular traffic jam in front of Cinderella Castle to reposition the floats for the trip back to the barn. It'll be interesting to see how well they can pull this off. At least, it's only going to be for two weeks. 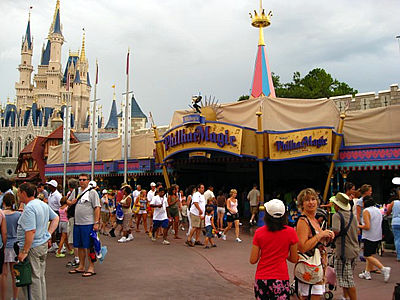 … The Blackstone private equity group is reportedly considering buying Busch Entertainment from InBev once the purchase of Anheuser-Busch is completed. Blackstone is co-owner of Universal Orlando (holding 50 percent of the resort), as well as being a major shareholder in Merlin Entertainments Group, which owns Alton Towers, LegoLand, the London Eye and more amusement enterprises.

Passholder rates are available for the summer. You can book both room-only and Disney Dining Plan packages. Rates are valid for stays with a check-in date between May 26 and August 2, and can be booked from now through the date of arrival.

The booking codes for phone reservations are:

Note that Small World agents have run into difficulty with the ADS code for phone reservations with dining, but have found an alternate code to use. If the code doesn't work for you, try code CSS.

The booking codes for online reservations are:

Passholder rates are available for late summer and early fall. It appears that both room-only and Disney Dining Plan packages are available. Rates are valid for stays with a check-in date between August 3 and September 27, and can be booked from now through the date of arrival.

The booking code for phone reservations is FKJ.

The Disney Cruise Line has announced a special deal where any bookings through the Disney Cruise web site (link) will only require payment of half of the usual deposit, with the other half due with the rest of the final payment. The offer is only good on new bookings, and for category 4-12 cabins only. The offer is available to those booking online or through their travel agents (though the travel agent would have to book the cruise through disneycruise.com for the offer). Bookings are also eligible for the standard $25 onboard credit offer for all online bookings. The deal is available "for a limited time," but there's no word on when the limited time expires.