Disney employee union takes their dispute back to the street, 30 arrested | City Hall responds to reports about new complaint process | This and That

Disney employee union takes their dispute back to the street, 30 arrested

After a march from the Paradise Pier Hotel, hundreds of Disney employees—some dressed as Disney characters—filled the intersection of Harbor Boulevard and Disney Drive, causing the Anaheim Police Department to divert traffic around the area. The union announced before the protest that approximately 30 people would "accept arrest" for the act of civil disobedience, and the arrests were made without incident. 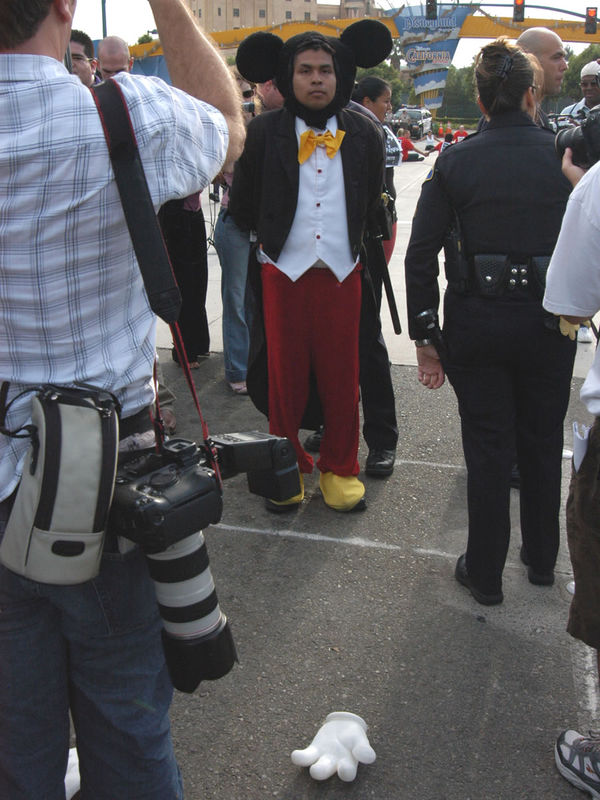 A protester dressed as "Mickey Mouse" is arrested at a Disney employee union protest. Photo by Adrienne Vincent-Phoenix.

MousePlanet's Adrienne Vincent-Phoenix attended the protest, and posted photos and commentary in her MousePlanet Blog (link). Read statements from both the union and Disney, and share your opinion on our MousePad discussion board (link).

Several readers responded to the article to say that Disneyland's Guest Relations department has had a more-or-less formal practice of discouraging written complaints for quite a number of years. A few MousePlanet staff members have experienced for themselves the practice one cast member called "diversion," a process that usually involves calling an area lead or manager to City Hall to discuss a situation with the guest in person. Cynics claimed that the policy was enacted to lower the number of written complaints, thus raising customer service scores; proponents say that the practice usually provides a prompt and personal resolution to the complaint.

After Koenig's article was published, the MiceAge Web site wrote about the new policy, but also claimed that letters sent to Disney's Guest Communications department about a trip to the Disneyland Resort were returned unread (link). According to the article, "...when the letter contains a phrase or sentence that mentions a visit to a Disney park, it is folded closed. Once closed, the visitors letter is attached to a form letter that politely informs the reader that this correspondence has been formally rejected by Disney for liability reasons and has been returned to the sender without further acknowledgement of the company."

The Disneyland Resort issued a statement last week regarding their "new Guest Comment procedure," and maintains that all guest letters are read and answered:

Disneyland Resort has always welcomed Guest feedback. It helps us to measure our success, evaluate our operations, and reinforce our goal to provide a quality Guest experience.

In July, we implemented a change to our Guest comments process by eliminating Guest comment cards at City Hall at Disneyland and Guest Relations and Disney's California Adventure. Unfortunately, incorrect information surrounding this change has circulated with a message that Disneyland no longer accepts Guest comments - -and this is just plain wrong. The Disneyland Resort always has and will continue to value Guest feedback.

Instead of requiring Guests to complete comment forms as we had in the past, now we have assigned Cast Members to talk with Guests one on one, and provide each Guest with individual attention in an effort to resolve concerns or issues immediately before the Guest leaves the Resort.

While we would prefer to assist our Guests with any concerns on the day of their visit, Guests are welcome to write to us, in which case our Guest Relations Cast Members can provide a Disneyland Resort mailing address. Directing correspondence to our Guest Communications department ensures that all written comments are received, logged and responded to efficiently.
We will handle Guest letters in the same manner as we have for years before this policy change: we will process any incoming compliments or concerns, notify the appropriate area's management team, and send a personalized response to the Guest.

Guest feedback received since implementing this new procedure has been overwhelmingly positive. We invite Guests to visit City Hall in Disneyland Park or the Guest Relations Lobby in Disney's California Adventure Park on their next Resort visit and allow our friendly and knowledgeable Cast Members to provide them with the excellent service our Guests have come to expect from the "Happiest Place on Earth."

We'd like to hear about your experiences with City Hall since this change was implemented. Do you feel that the new policy provided a better resolution to your complaint, or did you feel it is intended to discourage complaints? (Or both?) Have you since submitted a letter to Guest Communications, and what type of reply did you receive?

...David Koenig reported in his blog last week that "Disneyland has decided upon Sunday August 17 as the final day for Triton's Garden. Construction will begin next week on converting the area to Pixie Hollow and Tinker Bell Meet & Greet." (link)

...Registration for our Fall 2008 MouseAdventure, scheduled for Sunday, November 16, sold out in record time last Friday, with the Basic division filling up in just 44 minutes. For those who missed registration, dates for the Spring 2009 event will be published here in the Disneyland Park Update, so be sure to check in weekly to stay informed about future events.

...Visitors planning trips to the Disneyland Resort this fall should make a point to check the Current Refurbishment/Attraction Closures section each week for the most recent updates, as Disney is adjusting the refurbishment schedule as the new fiscal year budgets are finalized. This week's changes include extensions to the French Market and Mark Twain refurbishments and a new closure to install the Halloween overlay at Big Thunder Ranch.

...Nancy Luna at the Orange County Register's Fast Food Blog got confirmation from Disney last week that the Vineyard Room in Disney's California Adventure is closing Sunday,  August 31 (link). The restaurant was originally sponsored and operated by Robert Mondavi Winery, and was named after the restaurant at his Napa Valley winery. Once Mondavi pulled out of DCA, the restaurant's operation was taken over by Disney, and most recently featured menus by Disney chef Gloria Tae. The Vineyard Room was used as an overflow venue when Disneyland's Club 33 was booked or closed for refurbishment, and was considered the most upscale restaurant in DCA. A MousePlanet reader posted that Tae has moved to the Grand Californian Hotel's Napa Rose.

...MiceAge columnist David Michael gave us a tip that Monorail Orange arrived at the Disneyland Resort last week, and has since been hoisted to the beamway. The new Monorail Red is still operating on a limited schedule, weather permitting, and the new Monorail Blue is said to still be completing mandatory safety testing. This is the first time that Disneyland has had all four Monorails on site since 2004.

...We reported last week that the Disneyland Resort will release the Tim Burton's The Nightmare Before Christmas Collector's Edition DVD at a product release and signing on Tuesday, August 26. The 15th anniversary edition includes the "What's This? Jack's Haunted Mansion Holiday Tour," offering both a ride-through and behind-the-scenes look at the Haunted Mansion Holiday attraction. We have confirmed that this bonus attraction content will be available on all versions of the 15th anniversary DVD, not just those sold at the Disneyland Resort, so those who don't care about the gift-with-purchase and don't wish to have their copies signed can save a little by purchasing the DVD off property.

...Next time you park in the Mickey and Friends parking structure, pay attention to any flyers you may be given at the toll booth. The Disneyland Resort is currently distributing a voucher good for a free souvenir pinjust complete the form and redeem it at one of three designated locations around the Resort.

...This is your last chance to enter the Dream Home Sweepstakes sponsored by Taylor Morrison Homes as part of their sponsorship of the new Innoventions Dream Home in Disneyland. To enter, visit the contest Web site, click Enter Now and complete the Web form (link). When you enter the promotional code WD12501, you will automatically receive the maximum number of entries for the contest, which means you won't be at a disadvantage for waiting this long to enter. Good luck, and remember that the winner has to host the next MousePlanet party.

Disney's Resort Magic and Good Neighbor Magic Packages – Package includes accomodations one of the three resort hotels or at one of 40 Good Neighbor hotels; Souvenir Park Hopper ticket with voucher for admission to Mickey's Toontown Morning Madness, plus one Magic Morning (early entry) for three-day or longer Park Hoppers; preferred seating at four DCA attractions (Disney's Aladdin - A Musical Spectacular, Muppet*Vision 3D, It's Tough to be a Bug!, Golden Dreams); Preferred Showing of Turtle Talk with Crush (Priority Viewing at the first Turtle Talk with Crush show of the day, on any one day - one voucher per Guest); Disney Dream coin keepsake (one per package), luggage tag and lanyard with pin; a Downtown Disney Fun Card; and a "Character Call" from Mickey, Minnie, Goofy or Crush. Contact Disney Travel or your favorite travel agent.