Paul Collins of the JAMMitors

MouseStation 251 - Paul Collins of the JAMMitors

If you want to contribute a story for our Monday Magical Moment segment (and possible inclusion in the Cast Place column here on MousePlanet), you can either use our email Magical Moment story form or the toll-free feedback line. (We love it when you use the voice mail system, because then we can play your call on the show!)

Thanks to our sponsor

Today's show is sponsored by Advantage Vacation Homes, a great vacation home rental company that gives you a place to stay with lots more space than a regular hotel room for a lot less money.

Remember, if you're planning a trip with a large number of people, a multiple-bedroom vacation home can be a lot cheaper than multiple hotel rooms.

For more information on what a vacation home is and what to expect when renting one, check out our interview of Fred Zorayq from Advantage Vacation Homes in Episode 219!

In this week's feature, Mark interviewed Paul Collins of the JAMMitors. Paul is an original member of the group, playing with them continuously since their formation in 1996 except for a couple of stints helping to launch similar groups in Tokyo Disneyland and Hong Kong Disneyland, including training the first all-Asian JAMMitor group. 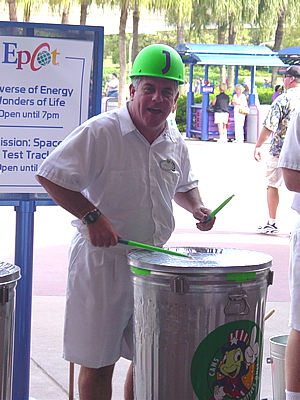 Paul Collins is the lead JAMMitor for the main (five-day) cast. Photo by Mark Goldhaber.

The JAMMitors perform in the Innoventions breezeways, usually in pairs of 6-7 minute shows starting 10 minutes apart, featuring music and comedy. The performers generally have drum & bugle corps experience, and the show features silly humor and guest interaction. They created a new show for the Epcot International Food & Wine Festival this year after adding a show for the Epcot International Flower & Garden Festival about 3-4 years ago. 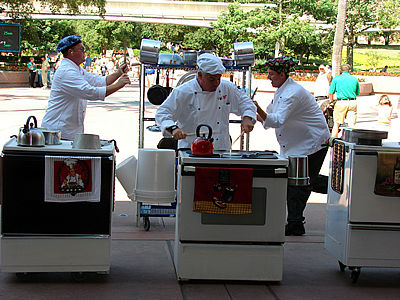 The JAMMitors introduced a new show this year for the Epcot International Food & Wine Festival. Photo by Mark Goldhaber. 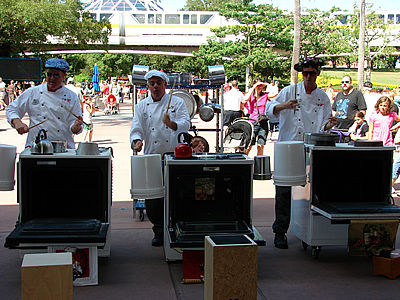 In the new show, the "Epcot JAMMin' Chefs" play a wide … er … range of kitchen equipment. Photo by Mark Goldhaber.

They've added a few different shows over the years, most recently "the gong show," which was added when they were performing for a while in front of Mission: Space.

The JAMMitors have their origin with the Trashcan Trio at Disneyland Park, when Walt Disney World wanted to form their own group. Danny Raymond, Jr. was playing with the Hollywood Hit Men at the (then) Disney-MGM Studios, Paul was playing with the Caledonia Bagpipe Trio at Epcot's Canada pavilion, and Anthony Parrulli (now with Blue Man Group at Universal Orlando) was added and the JAMMitors were born. 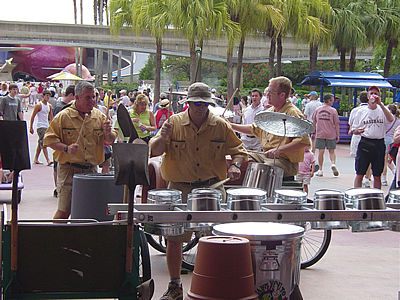 A show for the Epcot International Flower & Garden Festival was introduced a few years ago (this photo is from 2004). Photo by Mark Goldhaber.

Paul first got involved with Disney through the Disney All-American College Marching Band in the summer of 1979, then worked at Busch Gardens in Williamsburg, VA for two seasons before returning to Walt Disney World and becoming a member of the Future Corps (from 1982-1990), then joining the Caledonia Bagpipe Trio for five years or so. 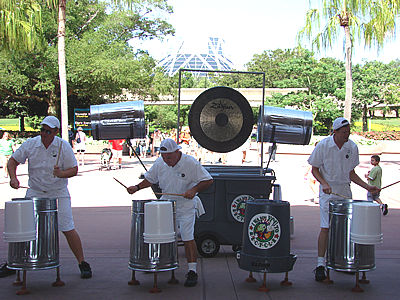 "The Gong Show" is relatively new, as well. Photo by Mark Goldhaber.

There are now two JAMMitors groups, the main group (led by Paul) that performs five days a week and a two-day group (led by original JAMMitor Danny Raymond, Jr.), with several subs, for a total of about 15 drummers. Drummers are actually cast to perform left-side, right-side and center (lead) positions. 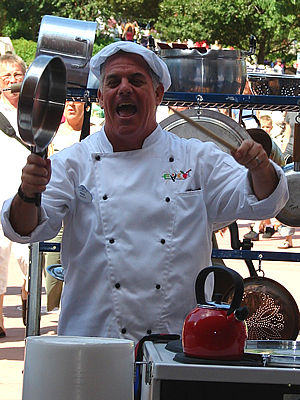 Paul cooks up a new rhythm with the Epcot JAMMin' Chefs. Photo by Mark Goldhaber.

Special thanks to Vicki Richardson and Benjamin Thompson for setting up this interview.

Deb from Michigan wrote in to thank us for our tribute show for the Adventurers Club. Mike noted that it may have been one of the better shows we've done since we started. Mark added that it was a lot of fun to record, and that the memory was still fresh in his memory when we recorded it.

He also asked whether Otis T. Wren's victory in the Balderdash Cup on the Club's last night was due to intervention by the actors or generated by the fans and how the genie illusion worked. Mark noted that the applause was generated by the audience and that there didn't appear to be any difference in the storytelling by the actors that night. As to how the Beezle trick worked, Mark and Mike agreed that it was done by Disney Magic. (If you're not satisfied with that answer, you might want to check out Wade Sampson's column this week.)

Tracey from the Disney, Indiana podcast called in a voicemail to respond to several things.

She really enjoyed the show with Mark and The Kid discussing their trip because it sounded like we had so much fun doing it.

Tracey also noted that she enjoyed the Segway tour around Epcot when it was first offered and she hopes to take the off-road Segway tour at Fort Wilderness this December.

She enjoyed the Shawn Coomer interview. It was great to hear about the park, even if it's unlikely that she'll ever get there.

Finally, Tracey noted that the Magic Carpets of Aladdin are a great place to watch the fireworks from.

Mark noted that he, his wife and The Kid listened to the show again on their long drive to Maryland last weekend and his wife noted that Steven did a wonderful job in cleaning up all of the arguing, coaching and other side chatter to make the show sound seamlessly clean.

Registration is now open for MouseFest! You can sign up now, and check out the many meets being hosted by MousePlanet as you plan your trip.