"One evening a restaurant guest accused a cocktail server of manipulating the check and overcharging. I marched right up to the server and demanded to see all his guest checks without giving him a chance to defend himself. I'll never forget how his hand shook as he grabbed the Budweiser bottle from his serving tray and smashed it into my face."

That's not the kind of passage that you'd normally expect to read in a leadership book. Yet at the same time, that's exactly why Creating Magic: 10 Common Sense Leadership Strategies from a Life at Disney is such a great read. In this new book, author Lee Cockerell tells how he himself did not know how to be a leader, but  through tough life lessons learned what it meant to be a strong and effective leader.

Cockerell, former Executive Vice President of Operations at Walt Disney World, has put together a book that somehow tells three stories at the same time:  the story of his growth from a good manager to a great leader;  backstage stories about management and leadership decisions at Walt Disney World; and important practical lessons about how to be a great leader. Remarkably, he manages to accomplish all three very successfully.

Creating Magic ("It's not the magic that makes it work; it's the way we work that makes it magic") is based upon "Great Leader Strategies," which Cockerell wrote and later recorded as a two-CD series for Walt Disney World cast members over a decade ago. I had the good fortune of being given a copy of the CD set as a gift by Mike Demopoulos, a former cast member and now my co-host on the MouseStation podcast. I found them to hold some important ideas and it's still on my MP3 player to this day. The book uses those strategies as a stepping off point and goes into much greater detail, as well as providing a bit of back story on the author and who relates facinating stories of changes at Walt Disney World that were influenced by and had influence upon the strategies.

Many of the personal accounts relate to the Textile Services department at Walt Disney World, an area with traditionally high turnover at all resorts. By employing the strategies in the book, turnover in that department was drastically reduced, employees were made to feel more empowered, and productivity climbed astronomically. Other divisions are discussed as well.

Cockerell notes that his decision to write this book was made back in 2004, in the aftermath of hurricanes Charley and Frances, as he read the hundreds of "thank you" letters written by resort guests and thought about the leadership structure in place that accomplished so much during and after the storms. He notes that he wanted to help people everywhere "create the same kind of magic in their organizations and in their lives." 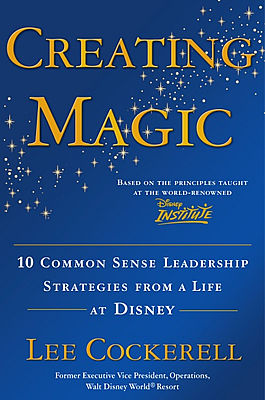 Creating Magic can be purchased through Amazon.com in hardcover and audio CD formats.

Cockerell's story begins on an Oklahoma farm, and continues with him dropping out of college as a young man to join the Army. His path led him through the Hilton and Marriott hotel chains with a few other stops along the way before he got to Disney, where he started out as part of the opening team for the Euro Disney Resort before moving to Walt Disney World. He learned from many people along the way, making a number of missteps as well, including the incident that opened this review. Yet Cockerell's survival of the missteps to gain leadership skills is one of the great messages of the book: great leaders are not necessarily born – you can also learn how to become a great leader. I personally like that message, as I have no illusions about being a born leader and know that I did not learn those skills in my youth. As I continue my quest to become a better manager and leader, Cockerell's story gives me added optimism that my goal is attainable.

Other Disney anecdotes in the book include Cockerell's modification of the typical reporting structure of restaurant operations at the Euro Disney Resort to achieve an operation that attracted and retained talented chefs, which was normally impossible for hotel operations. Some accounts tell of process changes, finding talented candidates for positions in unexpected places, and even letting talented staff go for the improvement of the organization as a whole.

The leadership strategies in the book are broken down into their own chapters with concrete examples throughout, and bullet-pointed action steps at the end of each section to ensure that you're working in the right direction. I've read many management and leadership volumes over the years, and I expect to read many more, but I believe that Creating Magic will be one of the books that I keep at hand to study again and again, with bookmarks and sticky notes throughout.

The book is written in plain English, in a straightforward style with no pretensions. Cockerell uses easy-to-remember acronyms such as RAVE (Respect And Value Everyone) and ARE (Appreciation, Recognition, Encouragement). He also liberally sprinkles the book with references to his family, including a story about how his grandson influenced a policy in Chester & Hester's Dino-Rama at Disney's Animal Kingdom (creating kids-only rounds in the midway games so that adults didn't win all of the prizes).

Cockerell has also recorded the book for an unabridged audio CD set. After listening to the "Great Leader Strategies" CDs, I find it enjoyable to listen to Cockerell tell his stories in his own voice. I may purchase a copy of the audio CD set for everyday listening and only use the book for reference or note-taking. (To hear Cockerell talk about the book, listen to today's MouseStation podcast.)

This book will be a valuable addition to any personal library of management and leadership books. I highly recommend it.

NOTE: Cockerell still teaches these principles at the Disney Institute, and in fact the book contains a code for a $400 discount on a multi-day individual program with the Disney Institute (valid through 12/31/09). That's the current equivalent of about 10 percent of the list price of a basic three-and-a-half day workshop, prior to other discounts. You can read more about the book and the author at his web site, LeeCockerell.com (link).