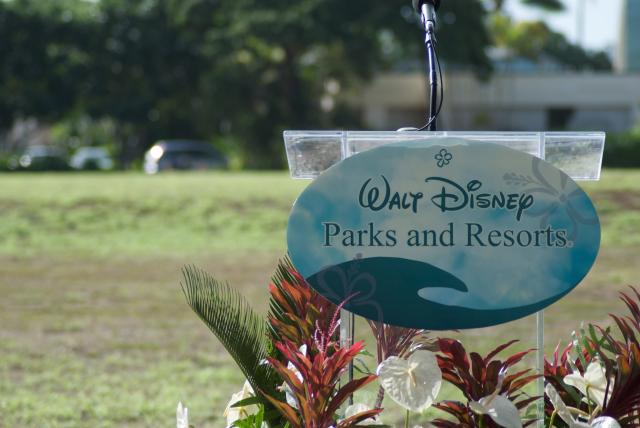 The podium for the Disney resort groundbreaking. Photo by Joe Philipson.

With a traditional Hawaiian blessing and a dazzling array of hula performances, Disney broke ground last week for its planned $800 million resort in Hawaii. 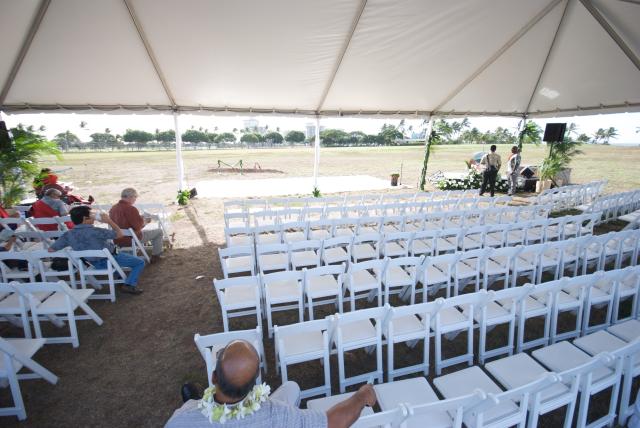 The setup before the Disney resort groundbreaking ceremony at Ko Olina. Photo by Joe Philipson.

The groundbreaking ceremony, held the day after Mickey Mouse's 80th birthday, was fittingly energetic and colorful. Sheltered from buffeting winds in a large outdoor tent, Disney officials and local VIPs and guests were treated to visits by Lilo & Stitch and Mickey and Minnie Mouse, and a series of performances by local hula halau and dance troupes. 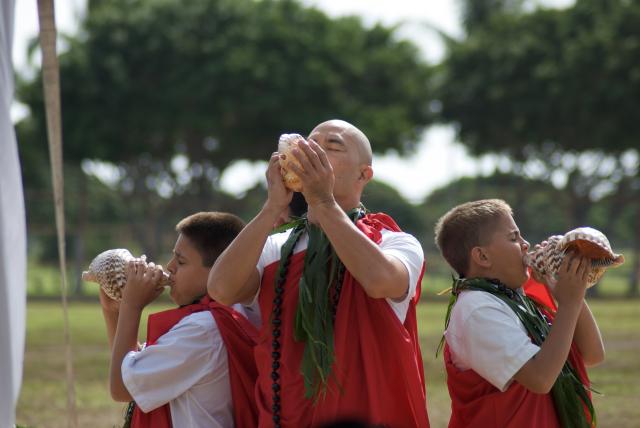 The Disney Resort & Spa at Ko Olina will be built on 21-acres of oceanfront property on the west coast of the island of O'ahu, about 25 miles from Waikiki. The flat and somewhat dry expanse of land on the island's arid Ewa Plains will be transformed, over the next three years, into a lush and lavish oasis featuring a giant artificial volcano, winding rivers and blue lagoons, swaying palms and grassy lawns.

The resort will include 350 hotel rooms, 480 Disney Vacation Club timeshare villas, an 18,000 square-foot spa and an 8,000-foot conference center. Also planned are restaurants featuring Hawaiian cuisine, a Disney Kids' Club, a wedding lawn, and a number of elaborate water features including several tubes and slides. Guests will be able to ride the rapids down the slopes of the volcano, frolick with their kids in a wading pool, or swim and snorkel in a saltwater lagoon. 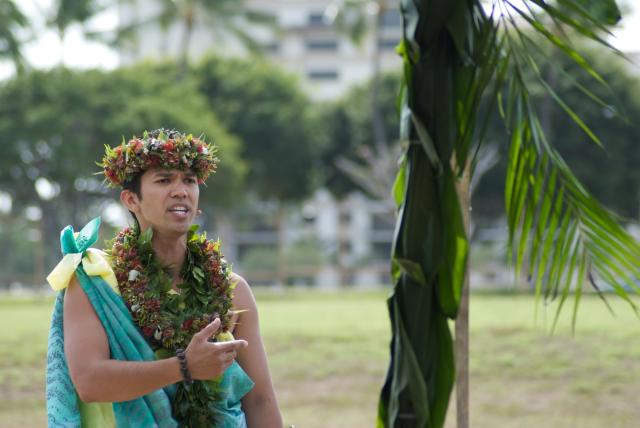 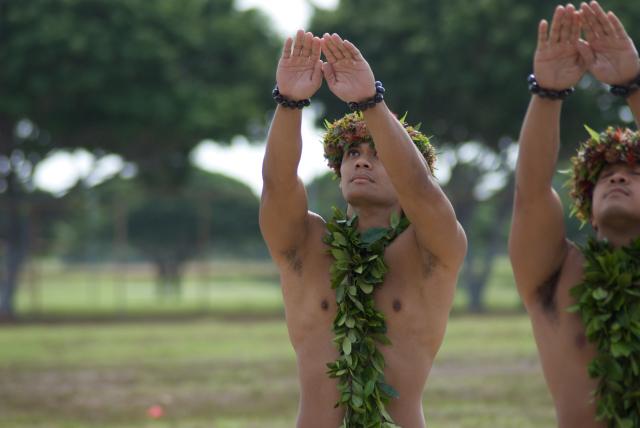 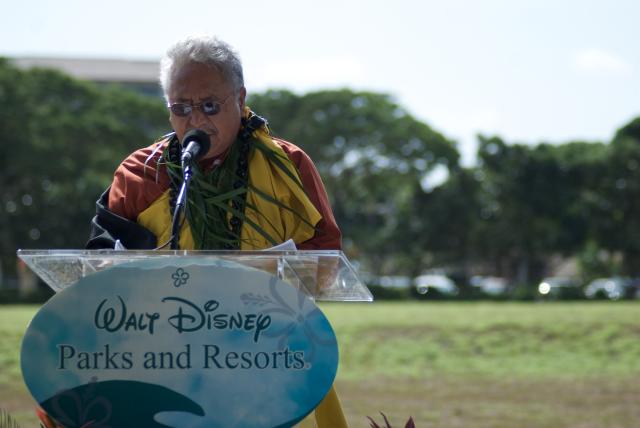 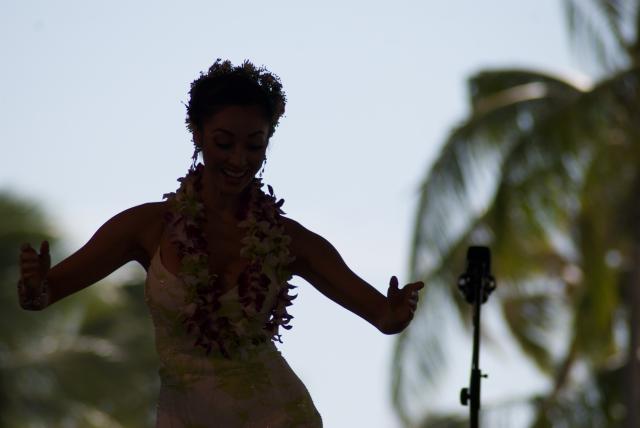 Without a doubt, Disney is banking on Hawaii's global appeal, noting that its Disney Vacation Club members reliably chose the Aloha State as a top destination.

"This will be a place where families can come and hear the stories of Hawaii," said Jay Rasulo, chairman of Walt Disney Parks and Resorts. "You have inspired us to design a place where our guests can develop a connection to this land and its people." 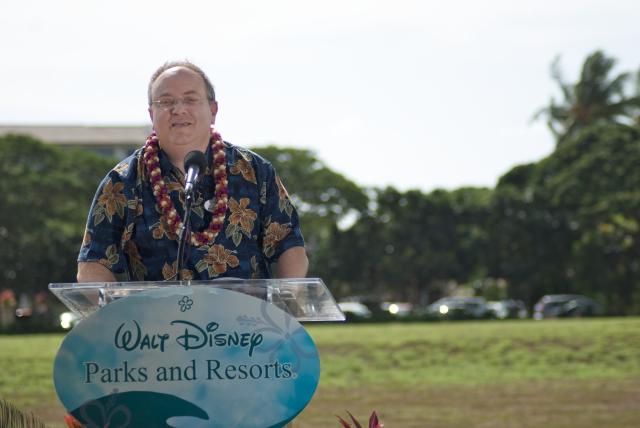 Disney and Hawaii have a long and varied history, from the 1937 Mickey Mouse short "Hawaiian Holiday" to the Polynesian Resort at Walt Disney World to the 2002 hit film, Lilo & Stitch. And Disney subsidiary ABC currently produces its top-ranked drama LOST in Honolulu.

Disney officials repeatedly affirmed the company's commitment to local values and sensitivity to Hawaiian culture. Plans call for cultural programming in the areas of environmental education, music, dance, history, and arts and crafts, as well as a "story-driven, technology-enabled adventure game." 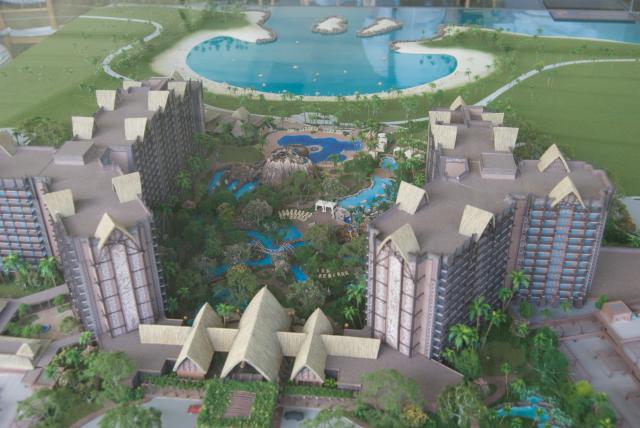 An intricate scale model of the planned DisneyResort at Ko Olina. Photo by Joe Philipson. 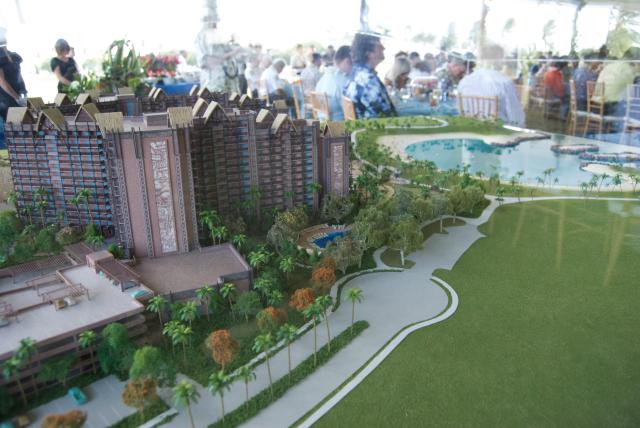 Another view of the intricate scale model of the planned DisneyResort at Ko Olina, with ceremony attendees visible in the background. Photo by Joe Philipson.

"In bringing this particular dream to life, we've embraced the traditional Hawaiian idea of 'laulima'—bringing many hands together to work as one in order to achieve a common goal," Rasulo said. "We have reached out to cultural leaders from the Leeward Coast and throughout the state to seek partnership and inspiration, and their insights continue will to be reflected in our ongoing work." 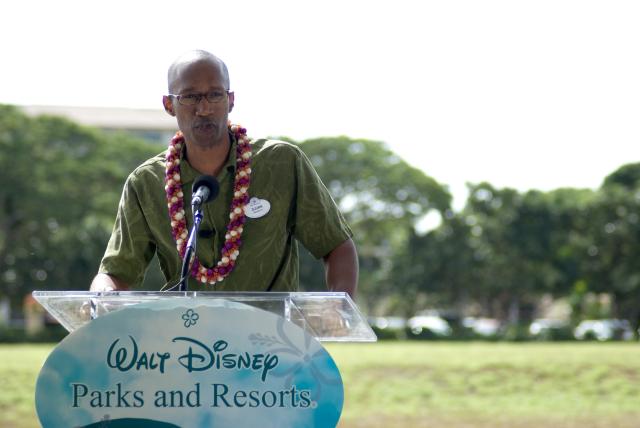 Nonetheless, local officials did not lose sight of the more practical benefits of the planned resort.

"I think first and foremost what Disney will bring to this project here is construction jobs," said Lt. Gov. Duke Aiona. 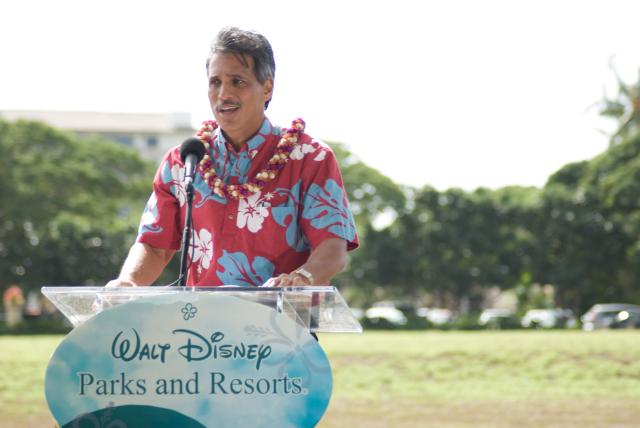 "It's about jobs, it's about development, and it's about property tax," said city councilman Todd Apo, who represents the area and also works for Ko Olina as Vice President of Corporate Operations. 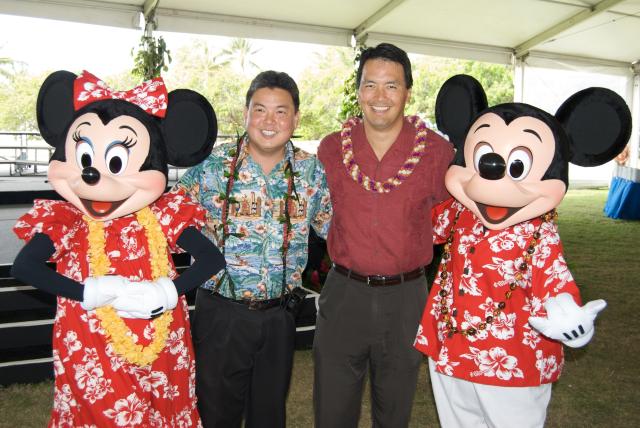 Once the multimillion dollar resort is built, Disney says it will employ about 1,000 cast members.

Notably, Disney is going ahead with its plan, despite the gloomy economic forecasts for Hawaii tourism and the nation's economy. 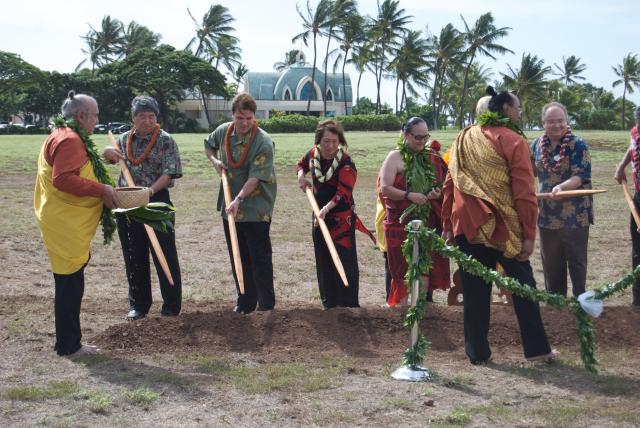 Disney and local VIPs take part in the groundbreaking for the Disney Resort at Ko Olina. Photo by Joe Philipson.

"Of course we hope that the current economic conditions improve," Rasulo told local ABC affiliate KITV. "We've seen business cycles before, and we can't predict any better than anyone else what will happen, but we have a long-term confidence in this location." 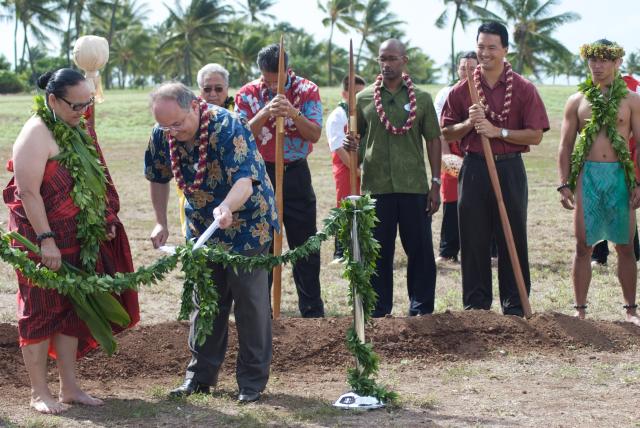 After the ground is broken, Jay Rasulo unties the ribbon of maile leaves as part of the groundbreaking ceremony for the Disney Resort at Ko Olina. Photo by Joe Philipson. 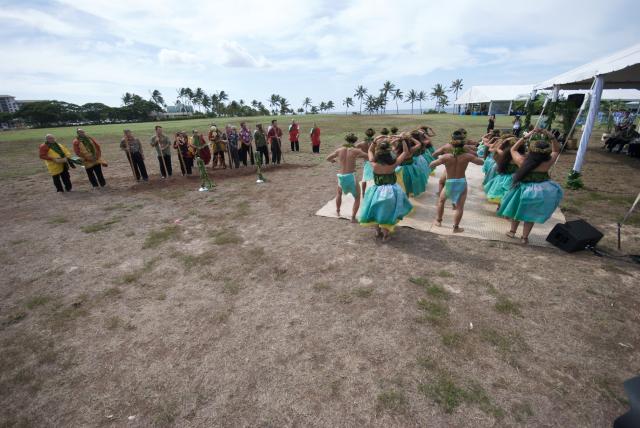 A group performs the hula during the groundbreaking ceremony as VIPs look on. Photo by Joe Philipson. 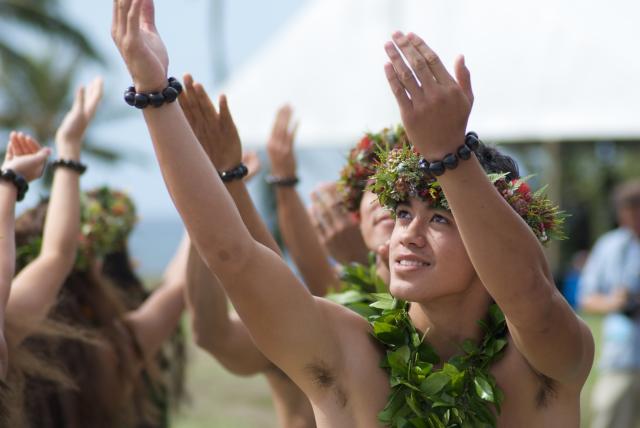 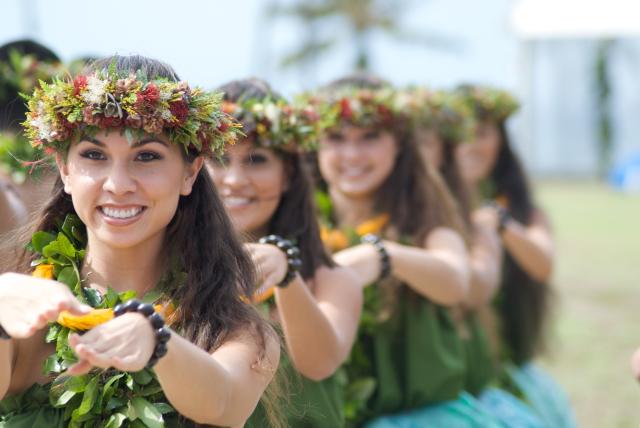 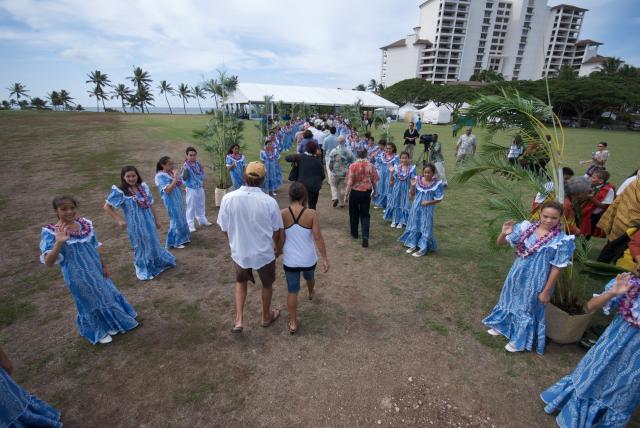 Local youths line the path back to the outdoortent following the groundbreaking ceremony. Photo by Joe Philipson.

"We are thrilled to know that Disney is already taking an interest in nurturing the talent of our students, who represent the future of Hawaii," said JoAnn Kumusaka, Waianae High School Principal, in a prepared statement. 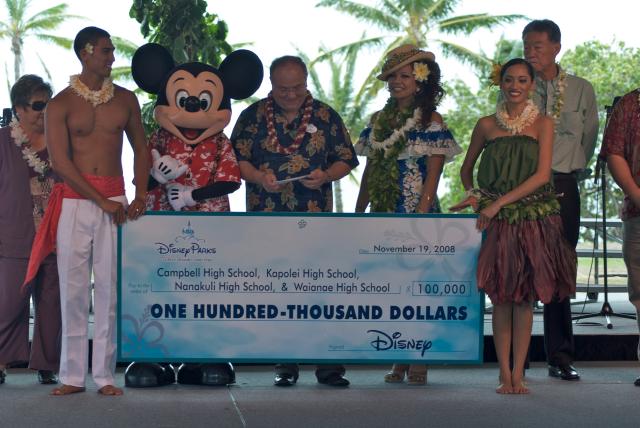 Disney presents a check for $100,000 to four Oahu schools. Photo by Joe Philipson.

State Sen. Colleen Hanabusa agreed that Disney has made "great monetary contributions to the coast," but added that Disney's decision to build at Ko 'Olina will mean a lot more to her youngest constituents, many of whom come from families that struggling to make ends meet. 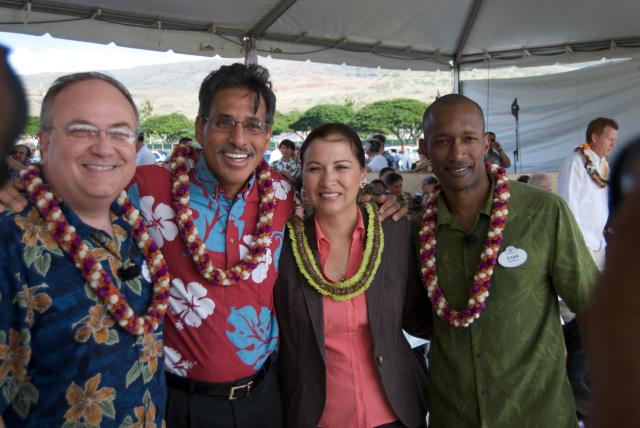 "Many of our kids will never see Disneyland or go to Disney World," she told local CBS affiliate KGMB. "This is such an enormous statement, to say, 'Disney is going to be your neighbor.' It gives them the opportunity to dream. To say, 'Hey, we can really do big things, because Disney feels we're OK to be their neighbors.'" 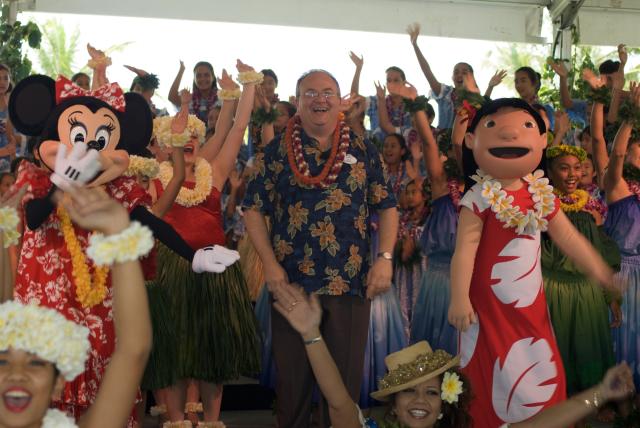 Jay Rasulo, flanked by Minnie Mouse and Lilo, give a big aloha at the conclusion of the groundbreaking ceremony. Photo by Joe Philipson. 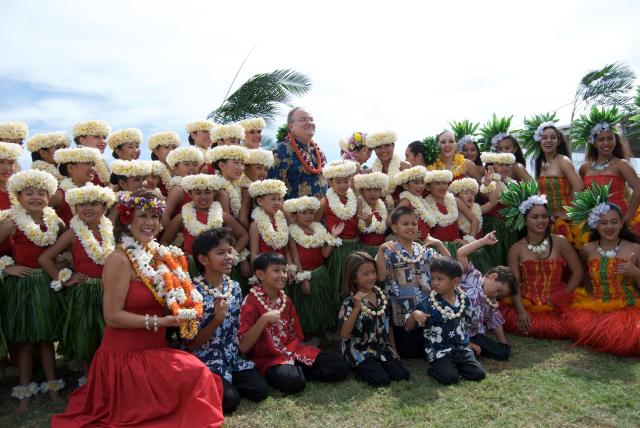 Ryan Kawailani Ozawa is a geek, writer, and married father of three in Honolulu who blogs about life at Hawaii Blog. Part native Hawaiian with an otherwise unused Journalism degree, he thought Disney did a good job with Lilo & Stitch but hasn't quite forgiven the company for the "Princess Tiki" travesty in High School Musical 2. Joe Philipson is a travel and wedding photographer in Honolulu. He works hard for the money, or lacking that, for lunch.