This week, I wanted to introduce our leadership series that I'll be focusing on for the next year or so. Of course, I'll focus on Walt and Roy and other key players in the organization. But I also wanted to highlight some of those individuals who are not necessarily known as "Disney Legends."

A couple of weeks ago, I noted that this year marks the 40th anniversary of Disney on Parade, which was a phenomenal success as an arena show in the early 1970s. If you're not familiar with it. you can read a description of it by referring back to the article. But how did it come to be?

The show was the brain child of Thomas Sarnoff, youngest son of Robert Sarnoff, famous as the president of NBC and CEO of RCA. The Wonderful World of Disney was on NBC on Sunday nights back then. Thomas Sarnoff saw this as a great way of bringing the show into cities across America. Disney saw it also as a great way to promote themselves, and particularly introduce their costumed characters and entertainment to the East Coast in preparation for what was then called Disney World. Sarnoff attracted the attention of Disney and they formed a company known as NAWAL. NA for the first two letters in National Broadcasting Company. WAL as the three first letters in Walt Disney Productions. NBC became the general partner. Disney was the limited partner. 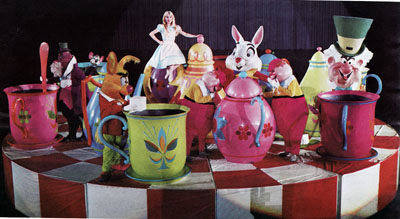 Sets and props like this used in Alice in Wonderland were often painful to haul from city to city.

Disney was originally responsible for the creative side of the house. NBC was to provide the financial side. Most of the creativity came from Walt Disney Productions and specifically, Disneyland, which built sets and provided elaborate costumes. The show was originally produced under a man named Bob Jani. He would largely become famous later on for the Main Street Electrical Parade (which drew its ideas from the ball gowns that lit up in the first Disney on Parade show) and for other important entertainment contributions. But all of that would come much, much later.

In 1969, after a year of planning, the show was launched, with spending at a stated $2.5 million. Casting calls were put out in the Los Angeles papers. According to Bobby Squires, who was one of the original cast of the first Alice unit, they did an initial cut. Then they invited those auditioning to participate in a six week process where they did further dance audions for the show, were introduced to character performing, and were scrutinized. After all, anyone working for Disney had to be fairly clean cut, just like those in the parks. In the end a final cast was selected. The show did a trial run in Long Beach then moved to Chicago for its premiere.

Interest in the show was high, but so were the costs. The show ran nearly three hours, included a cast of nearly 100 performers, and required 40 trucks to get it to Chicago. When it left Chicago, the number of trucks was cut somewhat shorter, but it was still suffering from the weight of its size. Other event shows like Ice Capades and Ringling Brothers Circus already had the best dates. Disney on the other hand, had a tour lineup that required crossing all over the country in an effort to make it to the next show. Yes, the show was phenomenally popular and well-received critically, but it was suffering from the weight of its size. Moreover, many in the cast were marching band members, and had little sense of movement other than parading.

Something had to be done. NBC took the lead. They brought in "Mr. G." 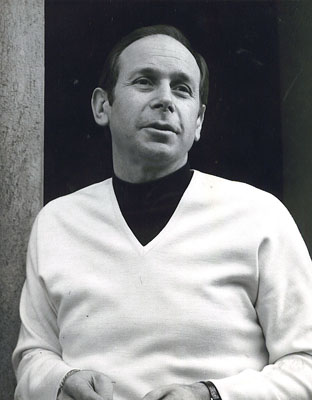 Michel M. Grilikhes, or "Mr. G." as many would refer to him.

Michel M. Grilikhes or "Mr. G." as he was known by the cast, was a producer previously for NBC. He had been in theater and entertainment for all of his life and had a variety of experiences. The wife of Lorraine Day, a popular movie star in her own day, he had a terrific sense of the theatrical and what audiences liked. He was flown over to the show to help work out the problems. The cast didn't know who he was at first—just someone walking around with a cane. But Mr. G took a look at what was happening and made an assessment. He said that within a few weeks they could fix the problems with the show, if they stopped touring. But if they kept touring, it would take longer and they would still bleed money. Disney opted for continuing the tour. Mr. G changed the show by doing the following:

First off, he reduced the size of the operation, without reducing the quality of the show. Some say that nearly half a million in large props were at some point thrown out. Also, there was a turn table that was removed from the production. Mr. G eventually got the show down to 12 trucks and, in some cases, down to eight trucks. He used folks like Steve Ehlers, who created subsequent show units with sets and scenery that was much more collapsible. He got the show down to an operational size that would allow them to travel in a more lean fashion.

Second, he fixed the length and quality of the show. He moved the "Dumbo Circus" section to become part of the finale of the show. He then brought in Tom Hansen to re-choreograph the "Jungle Book" number, which suffered theatrically. Hansen had done a number of TV variety shows including Red Skelton and Your Hit Parade. Mr. G re-recorded sections of the show, insisting that everything recorded be of top quality. The show eventually came closer to two hours in length, yet audiences still clamored over the quality of the experience. Later, he brought in top choreographers like Onna White (The Music Man, Gigi and Mame), as well as Marc Breaux and Dee Dee Wood (both with Mary Poppins and The Sound of Music) to work on subsequent shows that would carry the Disney on Parade banner.

Third, Mr. G helped Disney realize that this was a dance show, and that dance shows required dancers. Disney was nervous with dancers. Many of those hired had marching band experience, not dance experience. Some were very young, 18-19 years of age, with no experience being on their own, much less working professionally. Divisions were already setting in between those who who danced and those who wouldn't be seen with dancers. Something had to be done, and done swiftly.

D-Day came in Charlotte, N.C., not long after Mr. G stepped in. It was also known as Black Sunday. When the cast assembled for rehearsal, they soon realized that 15 of their co-performers were not present. Bobby Squire remembered that experience. His roommate, who played Mowgli in the show, was suddenly not there. Mike had acted quickly to remove those performers who simply could not do the show or who were carrying attitudes. He then informed those that were great personalities, but not necessarily skilled dancers that they had to learn the steps quickly, or they wouldn't be allowed to stay on. Mr. G was decisive, but determined that the show would stand on a higher plateau if it were to carry the Disney name. 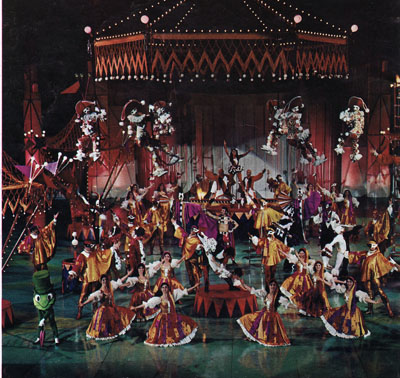 Major production numbers, like this Pinocchio number in the Snow Unit, emphasized the importance of dancers and skilled gymnasts/artisans.

Little by little more changes were to come until Disney on Parade became a very successful show. And how successful was it? Well, it probably could never be considered a success in the eyes of the shareholders. In fact, Gene Columbus, who managed and led many of the shows domestically and internationally, noted an occasion when he was with Card Walker, president of Walt Disney Productions, talking to an executive about bringing the show back to South Africa. Card began frantically looking everywhere, under papers, in drawers, around the book shelf. He then interrupted the conversation and excused himself for being distracted. Card said he was still looking for the first dollar he ever made with Disney on Parade.

But that said, the show was still an artistic and popular success. It set records in Madison Square Garden with a record $400,000 in advance sales. It booked 77,255 people in nine days in Salt Lake City. That was some 38 percent of the city's population back then. Critically, the show received rave reviews. And it toured in Australia/Asia, Europe, and Latin America. In the end it is said that it made some $64 million dollars in sales, all under the direction of Mr. G. 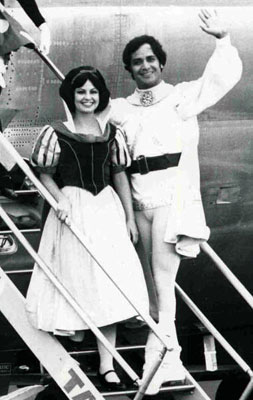 Michelle Randell and Ron Cisneros taken in 1974 in Australia. Michelle was trained by the original show's Snow White, Yvonne Green, who would later go on to take the role of Mary Poppins in the fourth and final installment of the show.

According to Beverly Allen , Mr. G's assistant, "Mike was Disney on Parade. He had a tremendous creative mind. he knew how to grab at the audience's emotions. He was a workaholic. But he was very much a family man."

Our next article explores Mike Grilikhes's role, not as an executive producer, but as a father to a surrogate cast and crew. We'll see that it's not always about the money. Sometimes, it's about the people. That's important, because being results-focused is only one important aspect of a leader. There's also a role that leaders play in building relationships--in creating a culture of teamwork and creativity. We'll look at that next time.

In the meantime, keep leading the magic for others.