Sometimes you just get lucky. I've heard someone won a contest and was able to play a round of golf with Tiger Woods. Maybe you'd like to prepare a meal with Emeril Lagasse. Or how cool would it be to play bass guitar with the Stones on "Satisfaction"? I haven't done any of those things, but I recently had the distinct pleasure of enjoying the newest Walt Disney World attraction prior to its official opening date. Not cool enough? I was accompanied on the attraction by one of the Imagineers who designed it. Now is it cool enough for you?

Let me tell you how this happened. We (most of my family and I) were getting ready for a Walt Disney World vacation and, representing MousePlanet, I had requested an interview with an Imagineer. I specifically requested someone that had worked on a recent attraction, but to be honest, knowing how busy they are I would have been happy talking with the cast member who sells balloons on Main Street (how do they keep them organized?).

The day prior to the interview, I was thrilled to learn I would be speaking with Jonathan Ackley of Walt Disney Imagineering, but still had no idea which attractions Jonathan had worked on. I was able to prepare the typical generic questions for an interview, but nothing very specific. I met Jonathan along with Benjamin Thompson and Diego Parras in Epcot's Germany. Benjamin is a Public Relations Manager for Disney and was kind enough to set up the interview for me. Diego is a Media Relations & Broadcast Manager for Walt Disney Imagineering and was there accompanying Jonathan. As it turns out, Jonathan was one of the Imagineers heavily involved in the design, development and implementation of the new Kim Possible World Showcase Adventure (and now I was really regretting not playing the game yesterday when I saw they were in "soft opening").

I had come equipped with a notepad and a voice recorder and was asking Jonathan what would be the best way to conduct this interview when he said, "Why don't we just play?"

We chatted a bit as he walked me down toward the nearest Kim Possible World Showcase Adventure distribution cart in Italy. These carts are very nondescript except for a very subdued "KP." 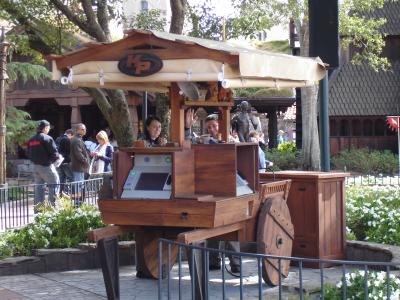 One of the Kimmunicator distribution carts. Photo by Steve Russo.

I learned that Jonathan had been with Walt Disney Imagineering for 8 years. Prior to that, he had spent several years with Research and Development. I asked him if Imagineering had always been one of his goals and he smiled a bit and said "Imagineering was the first place out of college I sent my resume. I got the 'I got it' letter, but it then took 10 years acquiring the needed skills before I was hired."

What was the inspiration for Kim Possible World Showcase Adventure? Jonathan explained, "It was an R&D (Research and Development) project. Basically, R&D and the Disney Company in general have a focus on expanding interactivity. We had done some notable products… there was a Park Media play test in Animal Kingdom. The "My Pal Simba" play test turned into the "Pal Mickey" product. This is an extension of that sort of interactive thing, but with some new technology and a new way of looking at that technology as a storytelling tool, as well as an interactive interface." After completion of the Kim Possible play test, Jonathan moved over to product test. Additionally, he "worked on an adventure game last summer—another overlay concept for Tokyo Disney Sea called the Leonardo Challenge." 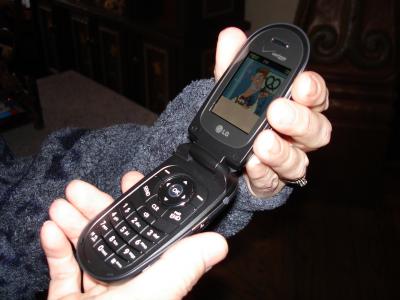 The Kimmunicator. Photo by Steve Russo

Attached to the Kimmunicator is a blue dongle, presumably to authenticate the software at each of the countries. Aside from the play itself, part of the beauty in this software-based attraction is the relative ease with which the Imagineers would be able to modify or add missions—keeping the attraction fresh. 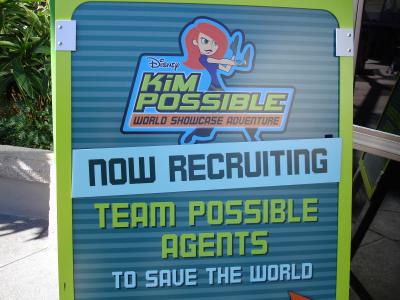 I should note here that there are displays set up in Future World, at Innoventions East and just across the bridge from the Odyssey. At these locations, you can swipe your ticket media and receive what looks like a FastPass (but it isn't), instructing you to take it to one of the five countries with distribution carts where it may be exchanged for a Kimmunicator. If you happen to be in World Showcase, you can just visit one of the carts, swipe your ticket, and get the Kimmunicator. 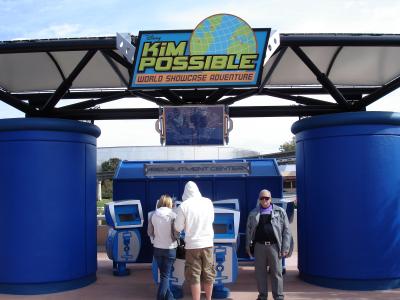 The Recruiting Station near the Odyssey bridge. Photo by Steve Russo.

Having adult children, I have only a passing acquaintance with Kim Possible. I did learn it's an Emmy Award-winning animated television series about a teenage crime fighter. It's a Disney Channel show that is action-oriented and espionage based, although it does poke a bit of fun at the secret-agent genre. I also learned a bit about the 10-year-old genius, Wade, who gives Kim her equipment and missions. Wade is very much a part of the World Showcase Adventure game and is the individual that gives you most of your instructions and help. 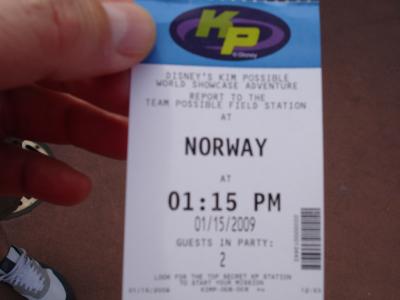 This ticket can be swapped for a Kimmunicator. Photo by Steve Russo

The first instruction you receive will tell you to make your way to a specific country and "Press the 'OK' button when you get there." When you've done that, the specific nature of your Adventure will be explained and you will be given the first of a number of missions. According to Jonathan, there are eight to ten missions in each game, depending upon the specific country.

To play the game, you interact with the show set—and by "show set", I mean one of the actual World Showcase pavilions. You will receive your instructions from Wade and set off visiting various locations within an Epcot pavilion, using clues to accomplish your missions. You will interact with inanimate items and, potentially, a few humans as well. You might find yourself walking up to a complete stranger and saying something like "Danger is my cup of tea". I don't want to provide spoilers or give anything away because the enjoyment of the game is found in interpreting your clues and finding what needs to be found to resolve your mission. You will find yourself initiating a number of very cool effects as you work your way through each Adventure.

The play is also spiced with a fair amount of humor—mostly the subtle, tongue-in-cheek variety. If you get stuck on something, don't fret. There's a 'Help' button on your Kimmunicator that will provide enough information, text and/or photographs, to get you unstuck.

Another very cool component is a repeat option for the effect you may generate. If you think it's neat, you can do it again. I found myself using this feature when other passers-by would stop and express interest. It's a terrific feeling of power knowing that you can hit a button and cause something to happen (sometimes on a fairly grand scale) in a World Showcase pavilion. 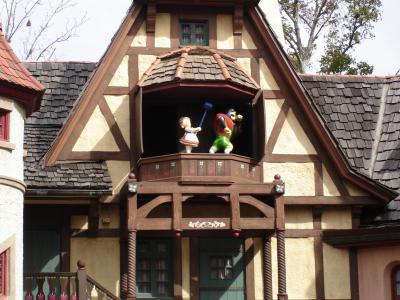 Just one of the game's effects. Photo by Steve Russo.

Did I like it? You bet. So much so that I was back the following day for another mission with my wife, and a third with my son and his girlfriend. I was told that a typical mission will require 30 to 45 minutes of your time and, in my brief experience, that's an accurate estimate. I have to admit it was a bit intimidating to play this game being followed by one of its designers. I was terrified of making a mistake and looking totally inept as I maneuvered around Germany on my adventure. But I was able to handle my missions successfully and conclude the game in about 30 minutes. We then sat down for some additional conversation.

I asked Jonathan about the choice of using the cell phone as the game player's control. My observation was that game play would be barely noticeable to non-players—considering the amount of cell phone usage in the parks today. Jonathan said, "Two and a half years ago, when we conducted the play test, there wasn't that many people walking around with phones. Now, everybody is walking around with a phone… so you're just blending in with the crowd." 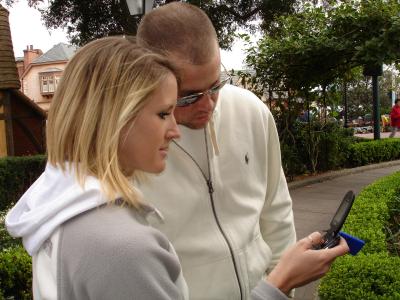 Checking a text message... or saving the world? Photo by Steve Russo.

He also said the game is getting lots of repeat play. Although they haven't yet accumulated the empirical data to substantiate that, it's an observation Jonathan has made from "Walking around on Mondays, observing the play".

I asked about further uses of this type of technology and could we expect to see more attractions like this down the road.

"I sure hope so. We're very excited about this one right now. We don't think there's a company other than Disney that could have pulled this off. We have the fantastic themed spaces which nobody has and it creates these wonderful sets. When Walt Disney built Disneyland his whole point was 'I want to let my guests enter the world of the movies' and the technology at that time probably limited him from doing things like this. We think this is a natural extension from what Walt had in mind, only now our guests can be the main character in the story rather than somebody passing through, observing.

"Live play tests were done in the United Kingdom and France about two and a half years ago. We ran a four or five week play test—probably the largest Imagineering had ever done. We put thousands of people through the experience. We then took it back, analyzed it for what works best then refined it for what you see here.

"The attraction speaks for itself. The Kimmunicator is very intentionally a remote control for the theme park. Kids, in particular, have a great feeling of the power and control that you can really only get from an environment like this. The humor is very smart so the adults like it. We consciously made sure the game was in the park; not in the hand set. We wanted a focus on enjoying the theme park."

Diego Parras offered, "We're really looking at experiences that are very immersive and personalized to give the guests that control. Where else are you going to have the control of an attraction? I think we're doing more of that with the interactivity of Turtle Talk with Crush, Monsters (Inc. Laugh Floor), Toy Story Mania… I think we've been able to create those personalized experiences in very different ways and I think Kim Possible is an excellent example of that. You are the attraction. It makes it very unique and we're very excited about it."

By the time you read this, the Kim Possible World Showcase Adventure will have been through an exclusive preview for Passholders and Disney Vacation Club members from January 23-25. The official launch was on January 28.

I want to express my thanks to Benjamin, Diego, and especially Jonathan for taking the time from their busy schedules to meet with me. It is truly appreciated.

Does Disney have another winner on its hands with the Kim Possible World Showcase Adventure? I believe they do. Next time you're in Epcot, give it a try. I'm betting you'll enjoy it.

That's my opinion. What's yours?

[*The article, when originally published, listed Italy instead of Japan. Updated Febraury 2, 2009.]