In the slightly less than than nine years of MousePlanet's existence, we've reviewed Walt Disney's classic Mary Poppins just once on DVD (February '01, by Tony Phoenix) and once at a theatrical sing-along presentation at the El Capitan theater in Hollywood (September '01, reviewed by Adrienne Krock, Adrienne Vincent-Phoenix & Tony Phoenix and former MousePlanet columnist Sue Kruse). In the 45 years since Mary Poppins was originally released in theaters, it's been on home video six times, including DVD, VHS and LaserDisc (remember LaserDisc?). It's also been re-released theatrically a number of times. Mary Poppins is quintessential Disney; it's difficult for me to conceive of a MousePlanet reader who hasn't seen it, possibly many times, and probably knows at least a couple of the songs by heart.

When inserted, disc 1 plays several Disney movie trailers and previews (a generic Disney Magic Movies trailer, the upcoming Pinocchio Platinum DVD/Blu-Ray, Disney-Pixar's Up, Space Buddies, The Secret of the Magic Gourd and Disney Movie Rewards) and then shows the main menu. You can skip the trailers by pressing Menu on your remote.

Poppins Pop-Up Fun Facts – as with many recent special edition DVD releases, pop-up trivia can be viewed during the movie. The brief tidbits of information are interesting for the most part, but the pop-up overlay is rather large, bright pink and very distracting. Compared to the same feature on last year's One Hundred and One Dalmatians Platinum DVD release, Poppins Pop-Ups do not quite measure up. 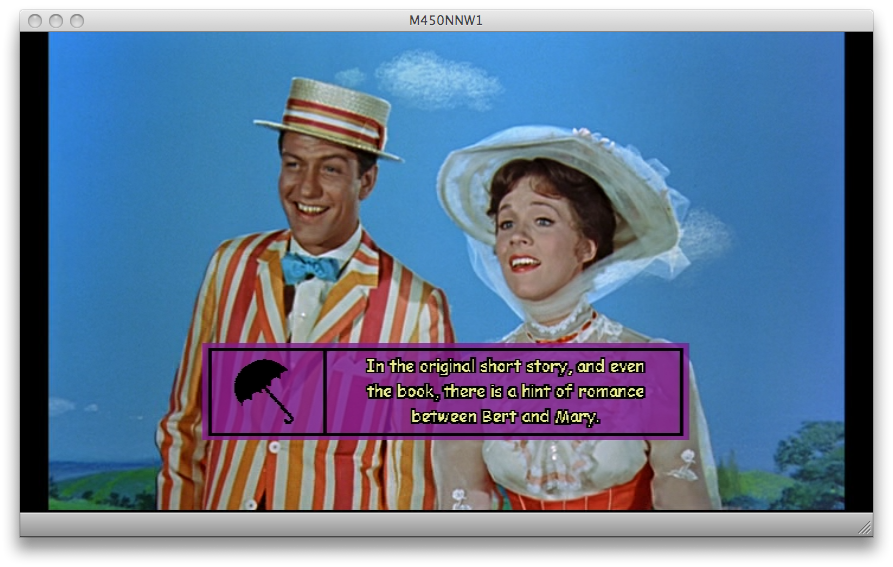 Disney on Broadway – The major item of interest, and the only actual new content, in the disc 2 bonus features is a selection of material about the Mary Poppins Broadway production. "Mary Poppins from Page to Stage" is a featurette with discussions and interviews with Thomas Schumacher, Producer/President, Disney Theatrical Productions, Ashley Brown, who plays Mary Poppins, Gavin Lee, who plays Bert, and Cameron Mackintosh, writer and producer of the show, among many others. Richard Sherman, who composed the original music from the film, is also interviewed about adapting his songs to the stage. It's an entertaining and informal look at the process and people behind bringing Mary Poppins to the stage. "Step in Time" is the actual musical number from the stage production, with an introduction by composer George Stiles. Dancing, sooty chimney sweeps-a-plenty. "Bob Crowley's Design Gallery" includes costume designs, set designs, concept art and set models designed by Bob Crowley, the set and costume designer for the stage production. Finally, you can download a copy of the never-before-recorded Broadway cast of Mary Poppins singing "Step in Time" in MP3 format; this feature is available when the DVD is played on a computer.

Rare Behind-The-Scenes Footage – Disc 2 includes quite a lot of backstage and behind-the-scenes footage from the film. First, "Supercalifragilisticexpialidocious: The Making of Mary Poppins" is the "making-of" short that first appeared on the deluxe VHS and LaserDisc releases. In this almost fifty-minute featurette hosted and narrated by Dick van Dyke, you get a detailed look at the creation and production of the film, from story conferences all the way up to the gala Hollywood premiere. "Movie Magic" is a short special-effects featurette which explains some of the amazing and fantastic effects used in the film. From Audio-Animatronics to matte paintings, it's all here. In "The Gala World Premiere" you get a backstage pass to the Chinese Theater in Hollywood. This was first released on the earlier 40th anniversary DVD, and is a compilation of several clips and elements--previously thought to be lost forever--about the world premiere of the film. The "Dick van Dyke Makeup Test" shows how, with makeup and vocal changes, the actor was transformed from Bert to the elder Mr. Dawes. "Publicity" is a selection of teaser trailers and TV spots, plus the premiere greeting by Julie Andrews. Finally, there's the requisite still art gallery, featuring visual and story development, Peter Ellenshaw paintings, recording sessions, costumes & makeup and general behind-the-scenes photos.

A Musical Journey with Richard Sherman – Richard Sherman, who along with his brother Robert, composed and wrote all the songs in the film, hosts this entertaining feature. Sherman explains the process of turning P.L. Travers' wonderful book into a musical picture, and how some songs that were written for but not used in the film were eventually re-used in other Disney films.

Deleted Song: "Chimpanzoo" – "Chimpanzoo" was a song written for Mary Poppins and originally intended to appear in the film after the "Love to Laugh" sequence. The song was cut just before the principals were due to record it. Richard Sherman performs the song on piano with storyboards that suggest it would have been another animated/live-action scene similar to "Jolly Holiday".

"The Cat That Looked at a King" is an original short film, narrated by Julie Andrews, based on another of P.L. Travers' short stories ("Mary Poppins Opens the Door"). It begins on a re-creation of the sidewalk set where Mary, Bert and the Banks children jumped into a chalk picture. Julie and two children jump into a new picture and experience the story. With character voices by Sarah Ferguson, David Ogden Stiers and Tracey Ullman, this is essentially a fun, modern cartoon that happens to use Mary Poppins (the character) as a framing device.

Two English audio mixes are offered: Dolby Digital 5.1 Surround and the Original 2.0 Theatrical Mix. I did not try the 2.0 mix but it should be fine for watching the movie on a portable DVD player or laptop, or a TV with built-in speakers. The Dolby Digital 5.1 Surround sound is well-executed if not spectacular; I did not notice any surround-sound effects, but the sound mix was certainly adequate for a forty-five year old film originally mastered in 2.0 stereo.

I did notice two or three significant video glitches, where the video froze for a few seconds while audio continued playing. It was notable that in each case, these glitches appeared while a pop-up trivia box was being displayed. I briefly went back and tried to find the video glitches again with pop-up trivia turned off, and couldn't find them, so it seems they may be an artifact of the pop-up overlay windows. In any case, they were not major problems, just momentary freezes. Overall, the restored print is gorgeous and very clear, with no visible scratches or anomalies.

The menu interface on both discs is delightful, featuring a motif of Mary's carpet bag opening to display the various menu choices. On disc 1, the images are fully rendered and lifelike, while on disc 2 they are sketched out like storyboards. Brief musical selections from the movie play in the background of each menu.

Since this edition includes the same restored and remastered print as the 40th anniversary edition and most of the same bonus features, if you already own the 40th anniversary edition you could most likely skip this one--unless the Mary Poppins on Broadway material is worth the price of the whole set. If you own the earlier, non-restored/remastered edition of the DVD, this new edition is a worthy upgrade, and the same goes for releases on VHS or LaserDisc. At a suggested retail price of $29.99, it might be a bit pricey, but Amazon.com has this edition for $21.99 and it will probably be priced similarly at warehouse and discount stores.

The remastered video and audio of this DVD match well with good quality components. Everyone's home theater environment is different, and my impressions of this DVD were influenced by the equipment on which I watched it. For this reason, I'm listing the current components of my home theater.