Disney Legend Wayne Allwine, the official voice of Mickey Mouse, passed away Monday, May 18, 2009 due to complications from diabetes. He was 62 years old.

Although others had voiced Mickey for various radio or theme park voice work prior to Allwine taking over the role, Allwine was considered the third "official" voice of Mickey, inheriting the role from master sound effects editor Jimmy Macdonald, who in turn was given the task directly from Walt Disney himself. 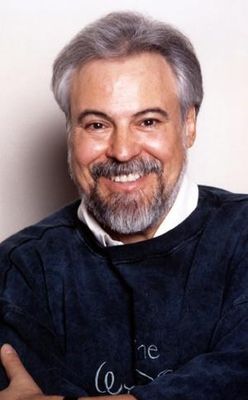 Allwine was born in Glendale, California on February 7, 1947. As a child, he appeared on the Art Linkletter television show House Party.  Musically talented, he formed a musical group, The International Singers, in high school.  The group performed in clubs and colleges around California.  He also recorded with singers like Dobie Gray and Bobby Vinton, and was a member of the musical group, Davie Allan and The Arrows (produced by Mike Curb).

In 1966, Allwine expressed an interest in working at the Walt Disney Studios. The father of one of his bandmates worked there, and put in an application for him and provided a reference as well.  Allwine started out in Traffic (what the studios called their mailroom division) and soon moved to the Wardrobe department.   After a short while, he was transferred over to the Audio Post Production department and ordered to follow around veteran sound effects man Jimmy Macdonald and do everything Jimmy did. 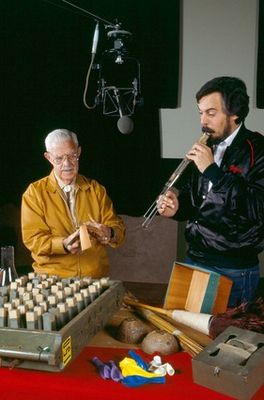 Allwine worked in the sound effects department for seven and a half years, with sound effects editing credits for various Disney films including Splash (1984) and Three Men and a Baby (1987).  He also worked for other Hollywood studios on movies such as Innerspace (1987), Alien Nation (1988, and Star Trek V: The Final Frontier (1989). 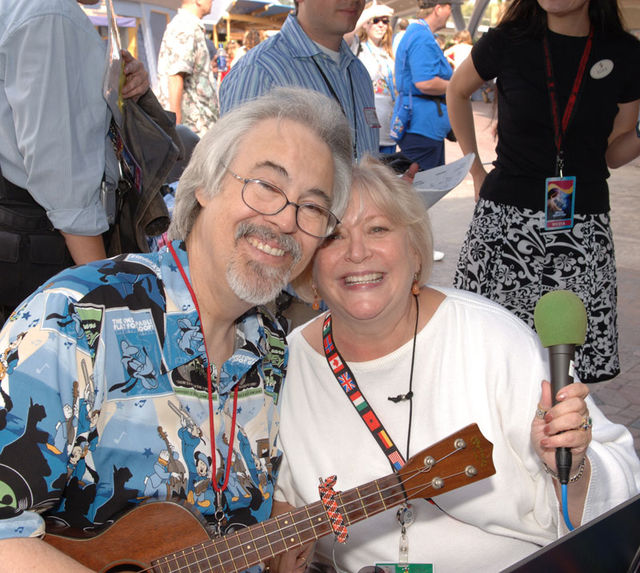 Wayne Allwine and Russi Taylor take a break between radio interviews during the Space Mountain reopening celebration in 2005. Photo by Frank Anzalone.

Allwine received several awards for his sound effects work:  an Emmy and the Golden Reel Award for his work on Steven Spielberg's Amazing Stories, and a second Golden Reel for the animated feature The Great Mouse Detective (1986).

At one point, he was asked to audition for the voice of Mickey Mouse.  Drawing on memories from his childhood of what Mickey Mouse sounded like, he did well at the audition and got the job.  Allwine's debut as Mickey was The New Mickey Mouse Club (1977-1978).  Following that television show, Allwine provided the voice of the mouse for numerous Disney movies, TV specials, video games, records and Disney theme parks around the world.  Film credits included Mickey's Christmas Carol (1983), The Prince and the Pauper (1990), Mickey, Donald, Goofy: The Three Musketeers (2004).  TV credits included Mickey's Mouse Works (1999-2000), House of Mouse (2001-2002) and "Mickey Mouse Clubhouse" (2006-2008).  Video game credits include the Kingdom Hearts series. His voice can also be heard at Walt Disney World as Mickey in the Mickey's PhilharMagic attraction. 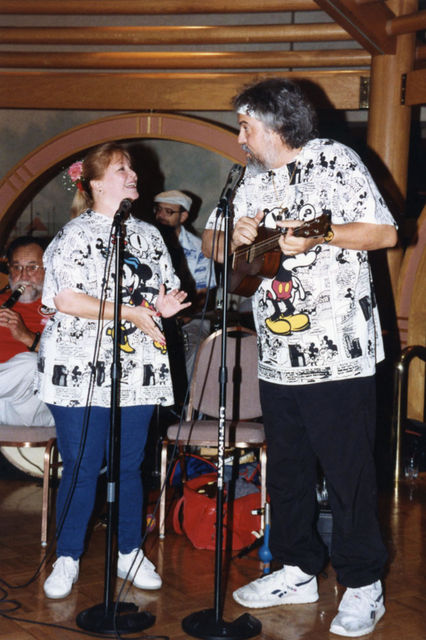 Taylor and Allwine perform for friends at an ice cream social in 1993. Photo by Frank Anzalone.

Allwine took the job of voicing Mickey Mouse seriously.  Mentored by Jimmy Macdonald in how to voice Mickey, Allwine was protective of how Mickey was characterized and even what vocabulary the character would use.  Allwine, in an 2004 interview said, "The main piece of advice that Jim gave me about Mickey helped me keep things in perspective.  He said, 'Just remember kid, you're only filling in for the boss.'  And that's the way he treated doing Mickey for years and years.  From Walt, and now from Jimmy.  I just feel like I'm filling in for the boss too.  And it really puts the whole job in perspective.  Mickey's the real star.  You know you just have to love the little guy while you have him, because he won't be yours forever." 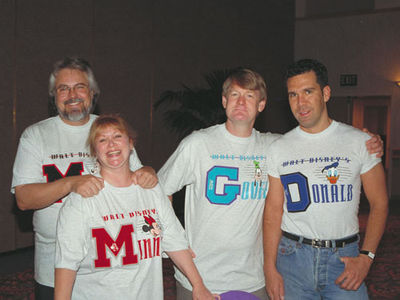 During one recording session for the Totally Minnie CD in 1987, Allwine met fellow voice actress Russi Taylor who was the official voice for Minnie Mouse. They soon fell in love and were married in 1991 in Hawaii. The marriage was kept quiet, however, as they wanted the focus to be on them and not that "Mickey and Minnie got married."  Allwine and Taylor were inseparable, and were married for 18 years at the time of Allwine's passing. 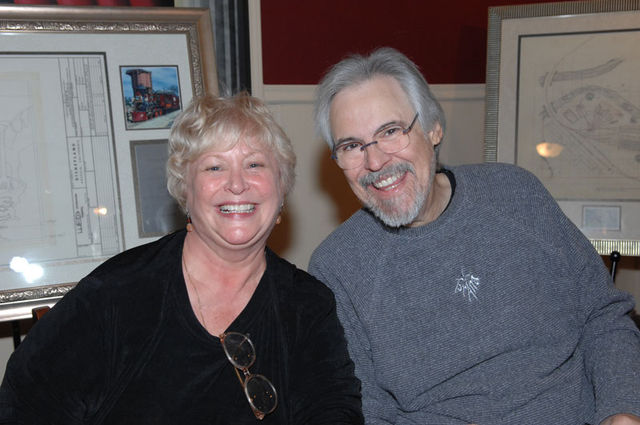 Wayne Allwine and his wife, Russi Taylor, the voice of Minnie Mouse. Photo by Frank Anzalone.

It was our WDW vacation in 1996… always a special trip for us traveling from California. Karen and I were just starting to walk down Main Street USA one day—we were with our friends Steven, Teri and their little girls (they live in Tampa). As we strolled, we suddenly heard, “Frank! Karen!”. (odd that we would run into anyone we knew 2500 miles from home!). It was Wayne and his wife Russi. They came over to us and there were warm greetings and hugs. Here are these two smiling people that just blend into the crowd, just enjoying the Magic Kingdom like us…

My friend Steven is a big Disney fan, but did not know who they were…

I turned to Wayne and said, “These are my good friends—and they are quite the Mickey fans…”. Wayne caught my eye, turns to them and says in that familiar voice “Hiya Steven!...”.

The look on their faces was priceless… it was a wonderful experience to share.

In May of 1998, I was at the unveiling of the new Tomorrowland press event in Disneyland.

After the dedication, the astronauts were all around the Tomorrowland Terrace for interviews. Wally Schirra, one of the original seven astronauts, as well as Wayne and Russi were there. Wayne was just as fascinated and in awe of these men as I was. I noticed Wayne was a little shy to ask so I gathered them together for a picture. Wayne then took my camera to take a picture of Mr. Schirra and me... he got in position and said, "Ready?... one, two, three... (click)"… and then Wally Schirra said, "you know... that should be “three, two, one'...(click)". That just had Wayne and I cracking up… a Kodak moment! 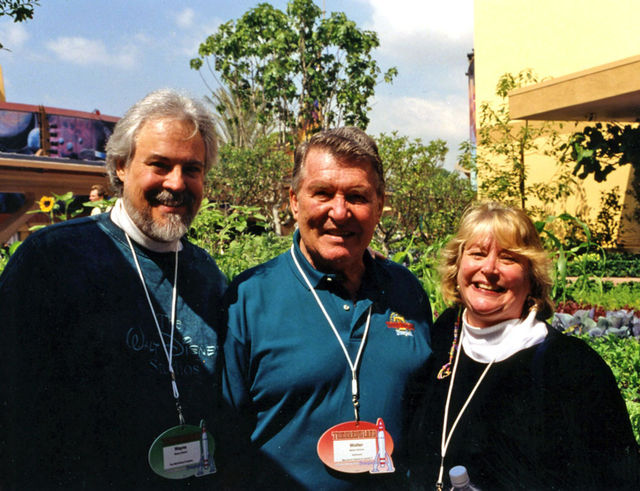 Wally Schirra (center), one of the original Mercury 7 astronauts, at Disneyland in 1998 with Wayne (left) and Russi. Photo by Frank Anzalone.

Allwine was inducted as a Disney Legend in 2008 and was immortalized with bronze plaque hand prints at the Disney Studio's Burbank Studio Legends Plaza.  At the time of his passing, he had done the voice of Mickey Mouse longer than anyone else (including Walt Disney and Jimmy Macdonald).

Allwine is survived by his wife Russi Taylor, and five children from previous marriages: Erin, Alison, Peter, Christopher, and Joshua, and a grandson Isaac. In Allwine's memory, flowers or toys can be sent in Mickey's name to Mattel Children's Hospital at UCLA, or donations can be made to children's charities such as the Elizabeth Glaser Pediatric AIDS Foundation,. Guide Dogs of America or St. Jude Children's Research Hospital.