My girls and I accepted the invitation to try Disney's attempt at a kids' makeover salon in Downtown Disney with trepidation, as we were not fans of the shuttered Club Libby Lu.  I always felt that Libby Lu made the very little girls who patronized the store look far older than their years and encouraged them to wear styles more appropriate for teens.  Beyond my parental reservations, my kids always saw the store as more geared to the 8 and younger crowd and never had a lot of interest. But I was curious to see what new twist Disney would offer with their vast history and knowledge of the tween set raised on the Disney Channel, so we stopped in on opening day to check it out. 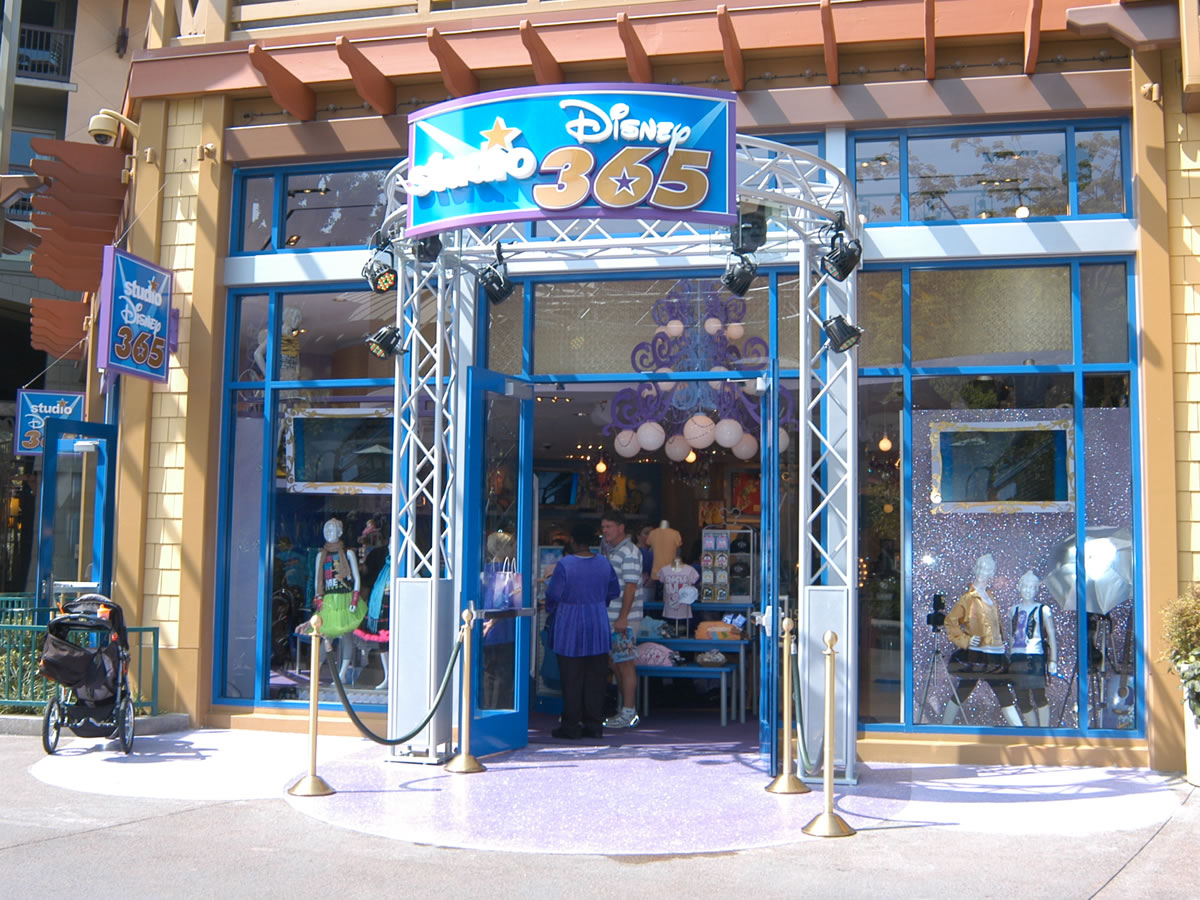 Studio Disney 365 is now open in Downtown Disney at the Disneyland Resort. Photo by Adrienne Vincent-Phoenix

After checking in at the crowded front counter, we were sent out with a pager (they work as far away as The House of Blues) and called back a while later.  A hostess asked the girls a series of questions about favorite Disney Channel stars, songs, movies and style preference.  This served to give the hostess and hairdressers topics to chat about while they style their clients and was a cheat sheet for the "official interview" at the end of the makeover.

After choosing a hair style from four sample pictures (the fifth style is for boys), the girls were whisked away to a chair smack dab in the middle of the store for their makeover. We declined a trip to the "wardrobe" department, but clients who opt for the wardrobe package select their outfits before their makeovers begin. 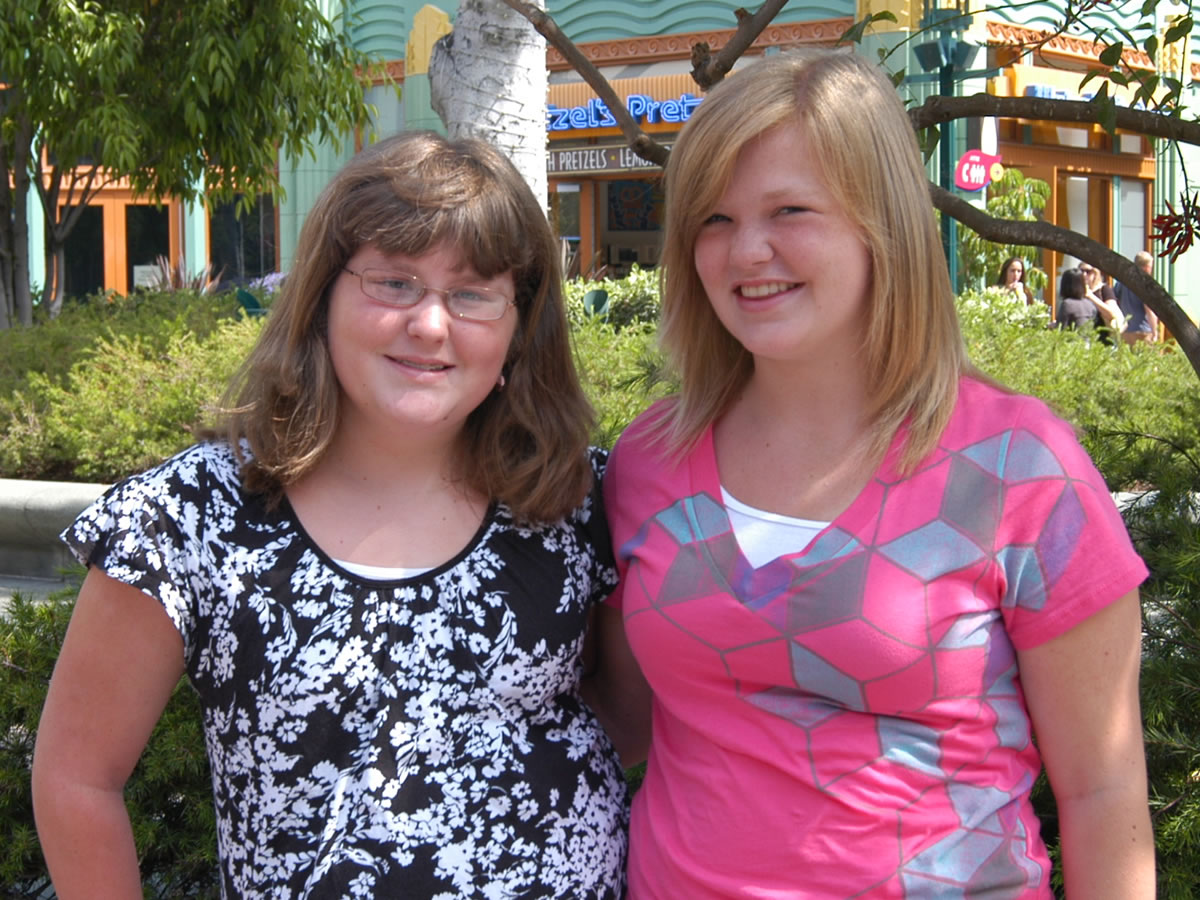 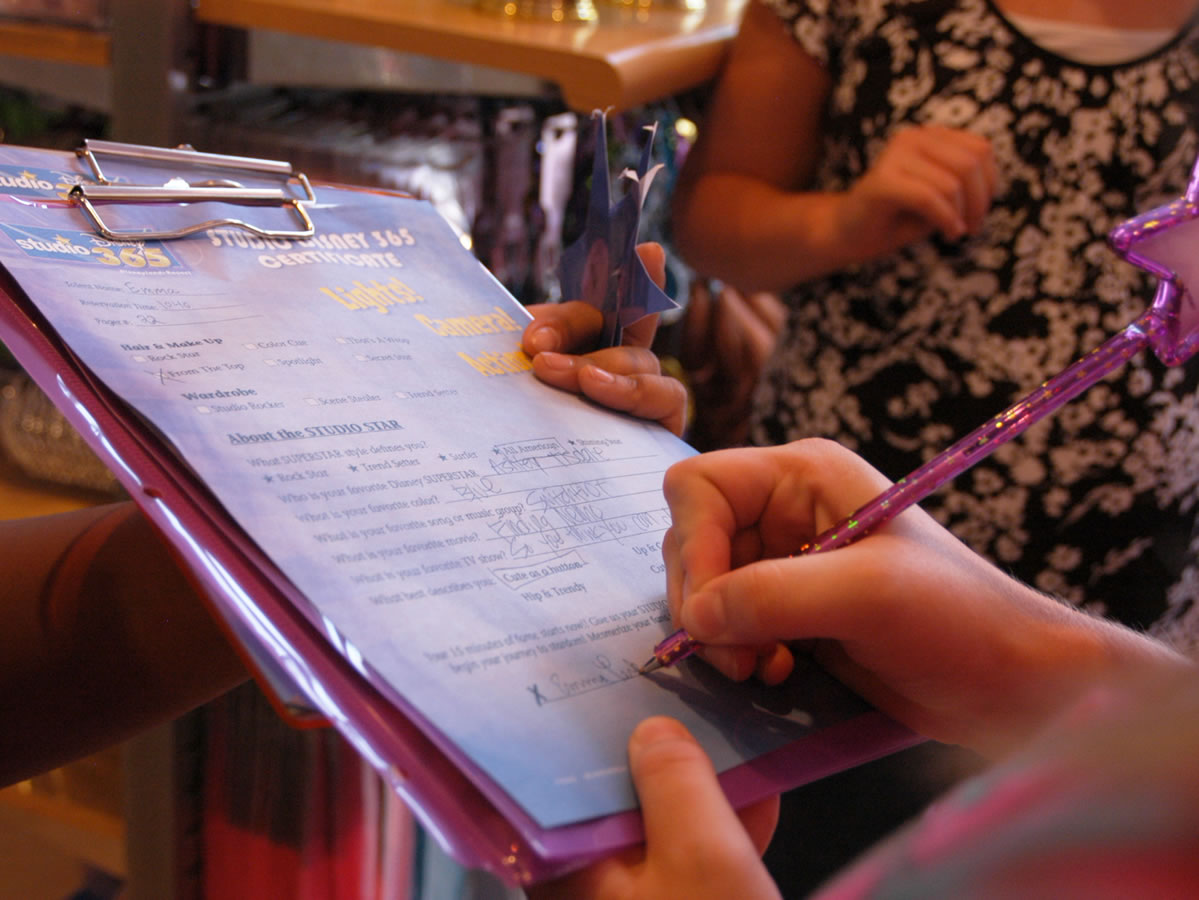 Emma signs her "studio contract" after the initial interview. Photo by Adrienne Vincent-Phoenix

The stylists my kids had were very well trained and were soon chatting and combing away.  The style my 12-year-old had picked was fairly complex and I was interested to see how close the finished product  came to the one portrayed in the photograph and was pleasantly surprised—the braids were very tight and even, despite my daughters many layers. The updo my older daughter chose came out even prettier than the example photograph.  The hair pieces used are pretty nice—a good variety of colors and styles. 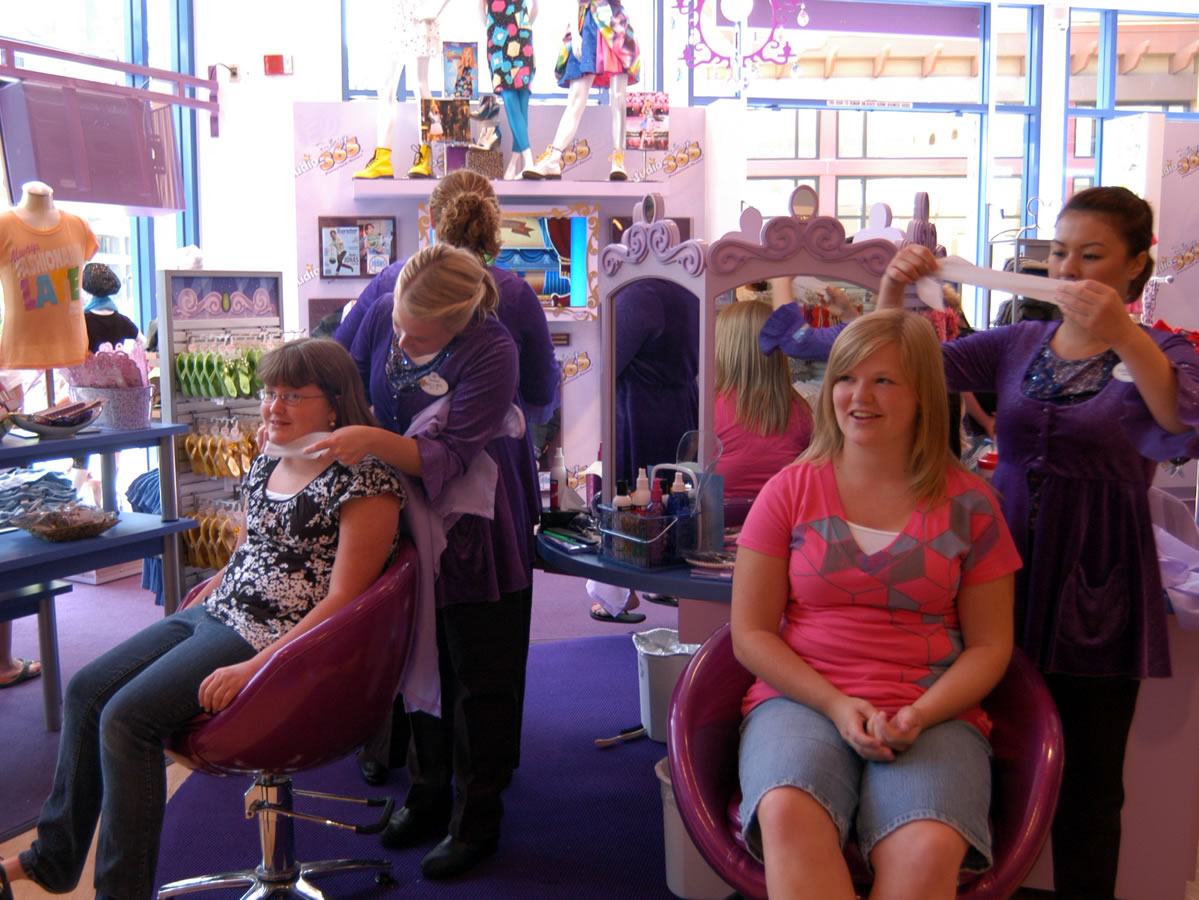 One styling station is prominently located in the center of the store. Photo by Adrienne Vincent-Phoenix

Two additional stylists began putting makeup on the girls as they were getting their hair done—I'm not sure if this was because of a time constraint or if that is the general plan for all the appointments. They use the little clutch-type make up kit that comes with the price of their makeovers and apply it very lightly to their eyes, cheeks and lips.  No glitter—although I did see a Hannah Montana makeover with a little glitter applique on the little gal's cheek. 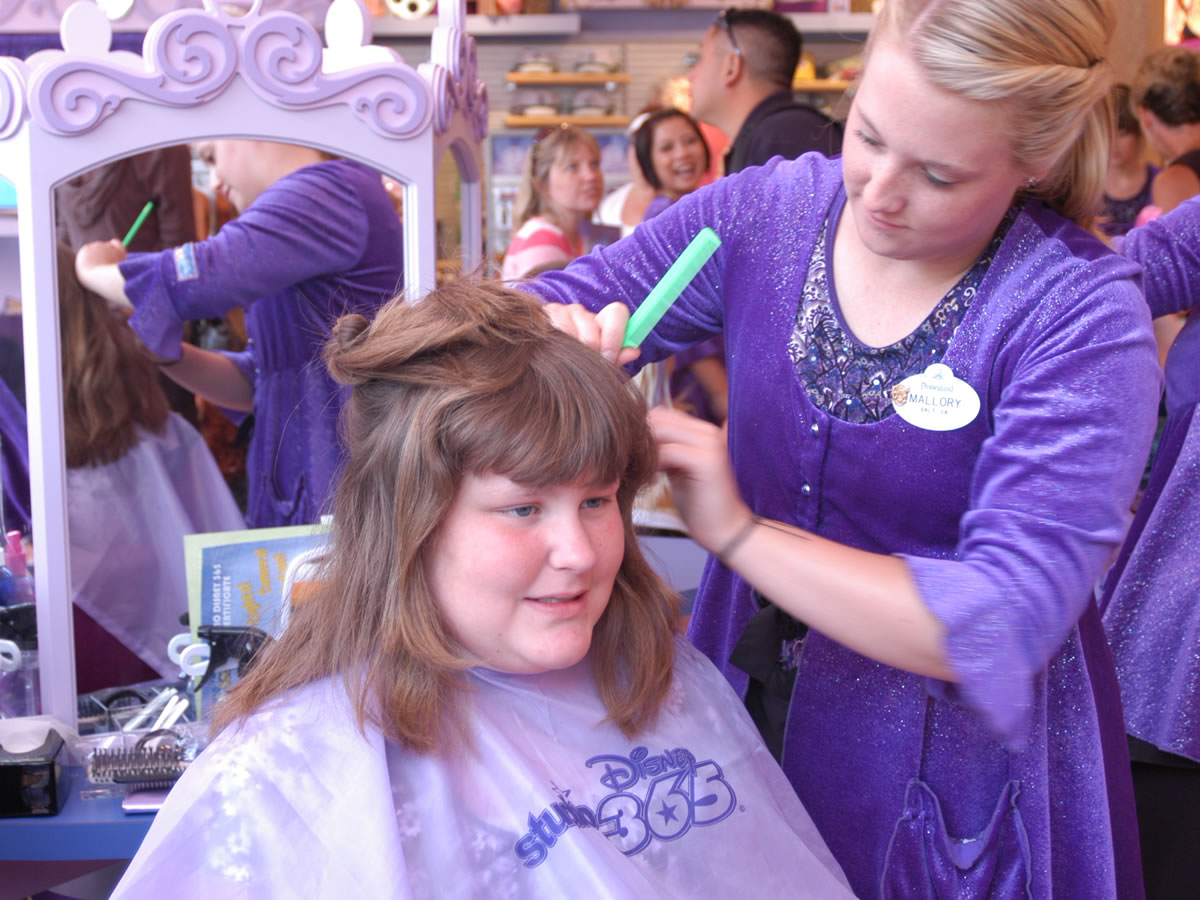 After the hair and make up was finished, it was time for the red carpet portion of the appointment. One of the stylists stood at the edge of a little carpet to introduce and interviewed  the "new Disney Channel star." Some kids loved it, some were a little intimidated, and others, like my girls, were mortified.  It's an age thing, I'm sure—my girls were some of the oldest in the store getting made up.  After the "interview"  they were escorted over to get their pictures taken for the Photopass lanyard.  The kids are photographed and one picture is chosen to be the cover of the Photopass which is put in a lanyard to wear at the park.  Any future pictures taken at the resort can be loaded on to the card as well.  Each card is good for a free photo download at www.disneyphotopass.com where all the pictures taken can be viewed (and of course additional pictures can be purchased) . 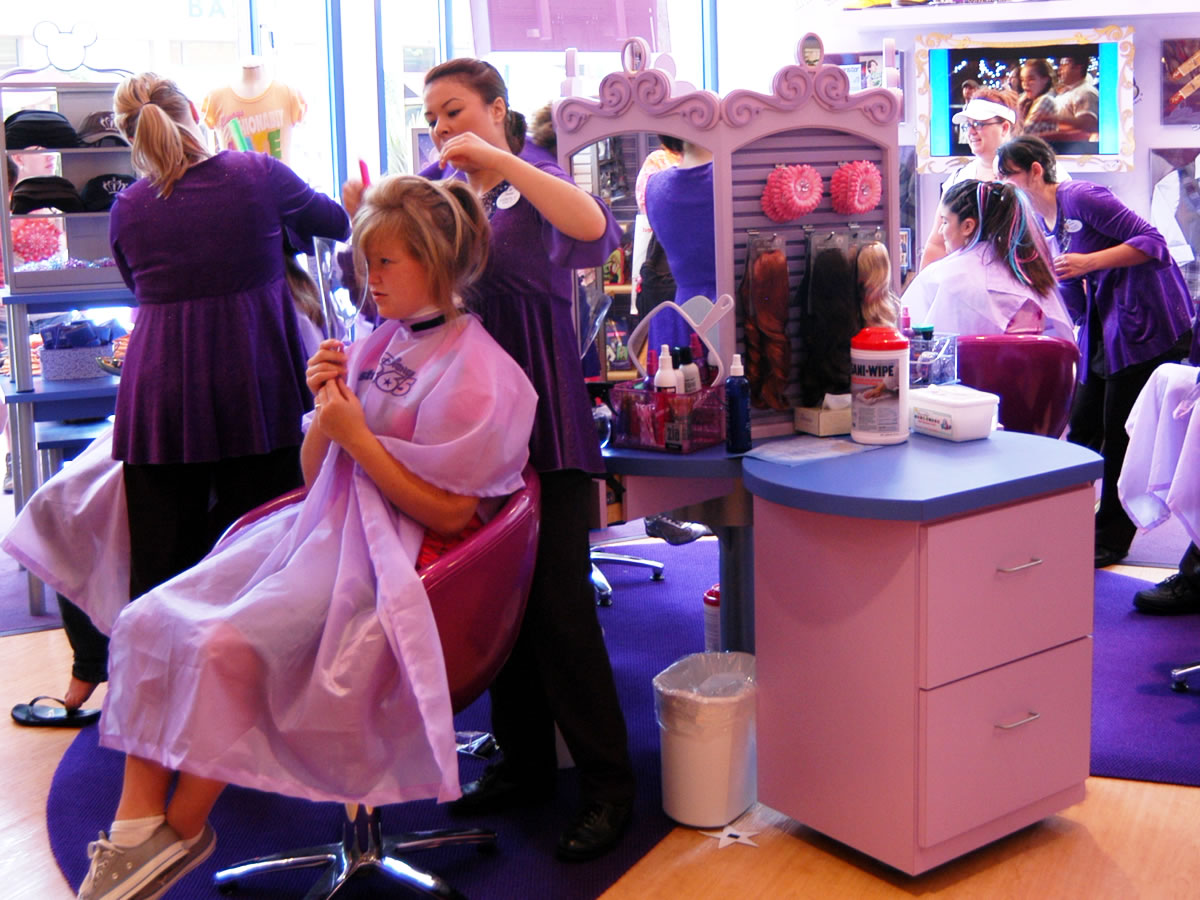 Emma holds a shield to protect her face from hairspray. Photo by Adrienne Vincent-Phoenix 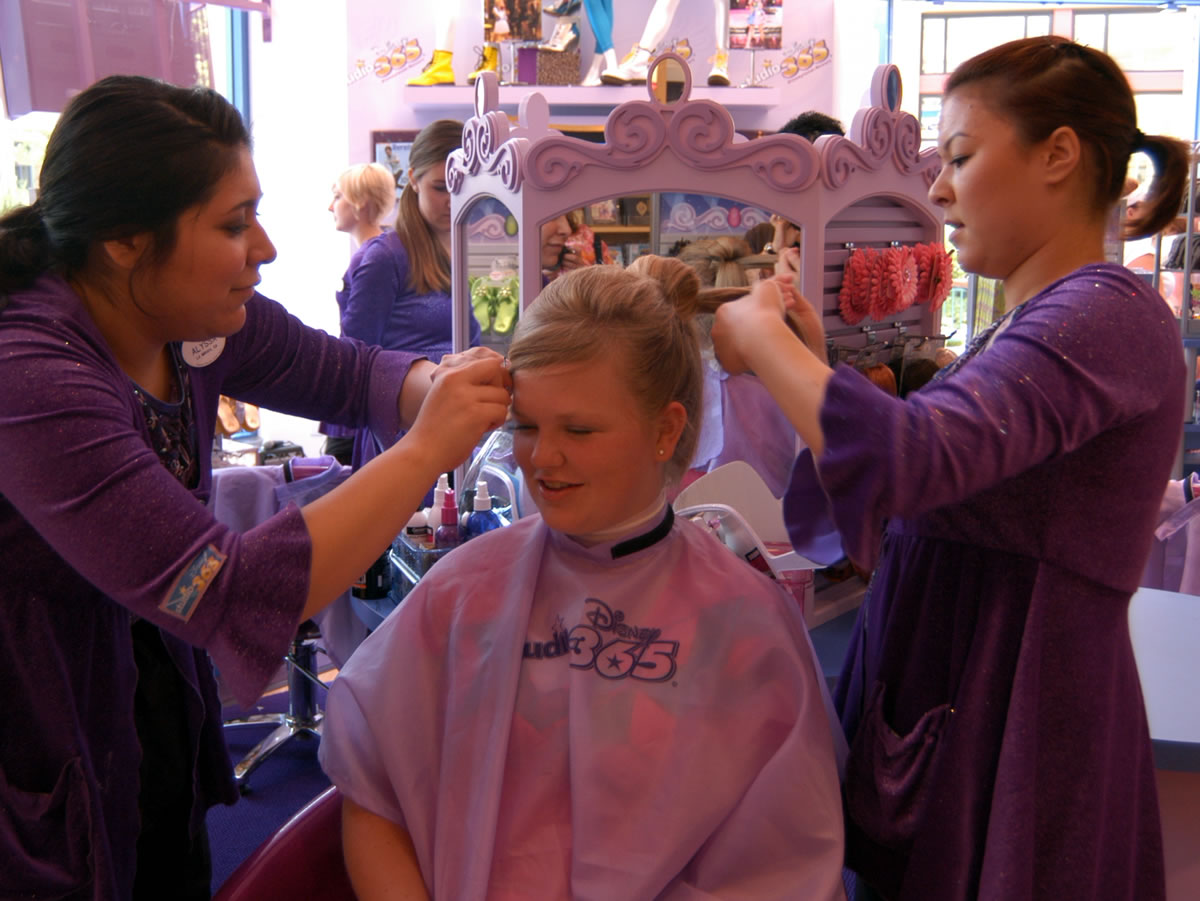 I felt the stylists and hostesses were well trained. They kept the kids engaged while they were working on their hair and face—and very literate in the language of Disney Channel. The styles themselves are youthful, fun and well executed. I was happy to see that the makeup was applied with a very, very  light touch—I think the idea behind it is to enjoy the process more than the finished product—I could barely see the results on their faces. The girls were impressed with the merchandise; most were items they had not seen before; pretty scarves and jewelry, hair clips and bands, hats and shoes. The items were things they would actually wear—not just buy as keepsakes from Disneyland. The photo lanyard was a great idea, and the actual photographs were excellent. 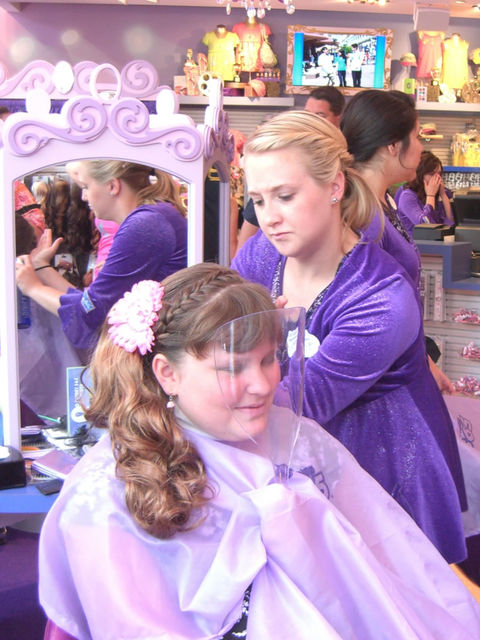 A realistic hair piece and colorful flower are the finishing touch for Char's style. Photo by Adrienne Vincent-Phoenix

The store is in almost the exact same layout at Club Libby Lu was, with the cash register/check in area smack dab in the middle of the store. They also had salon chairs right in front of the check-in area. This, combined with all the merchandise displays, parents standing around watching their kids get styled, and toddlers running amuck, added up to a logistical nightmare. An outdoor check-in stand might ease the congestion a bit. 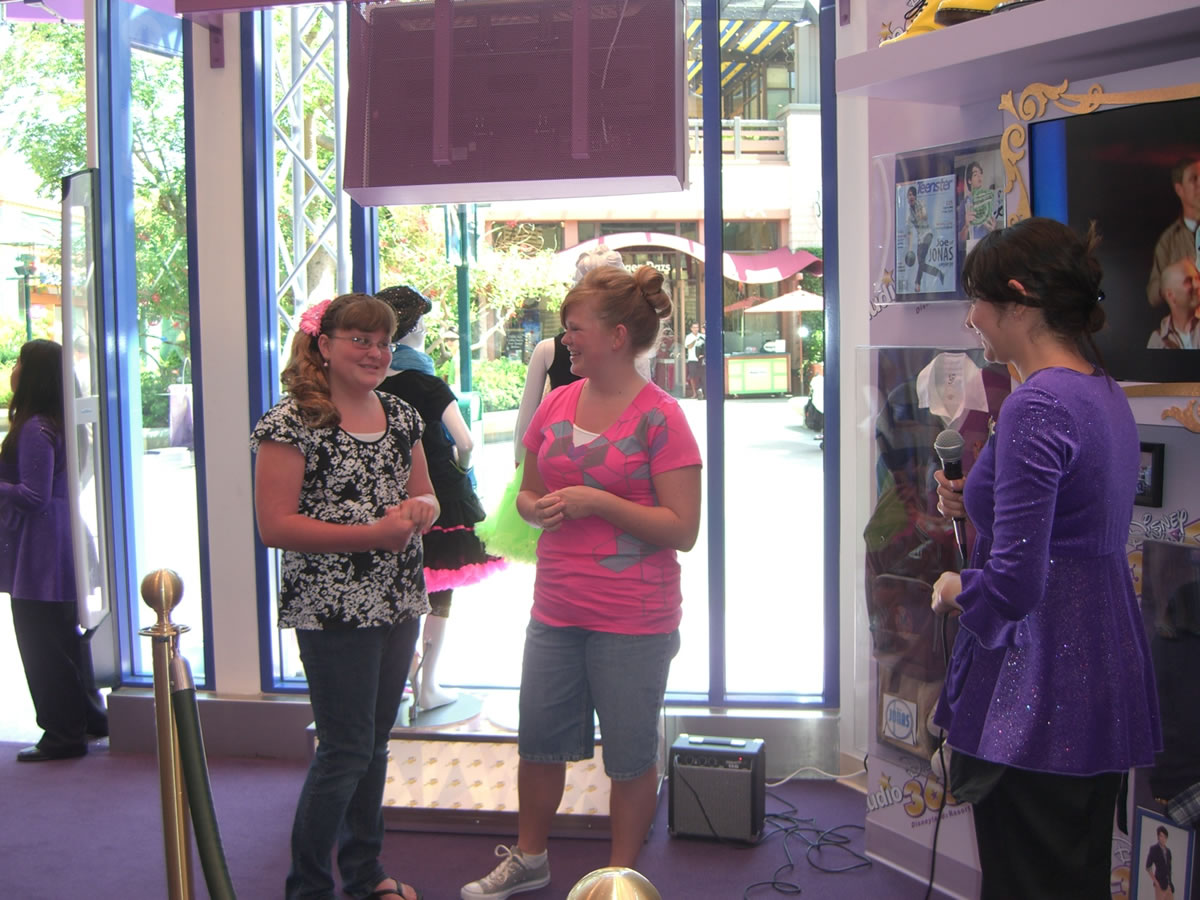 The girls get ready for their walk down the purple carpet. Photo by Adrienne Vincent-Phoenix

The cost is another sticky point. The basic package, which includes all of the take away items minus the faux hair, costs $29.95: not too bad.  But anything other than the basic services are $39-$59. The wardrobe packages start at $81.  The interesting thing is I saw several little girls with the full wardrobe packages the day we visited, so it's clear that some parents think it's worth the money.  I think it's pretty steep.

My kids were on the elderly side of clientele—the salon seems geared to kids from around 6-12; any child who eats, sleeps, and breathes Disney Channel; or kids who are too old for the Bibbidi Bobbidi Boutique and too young for Sephora.  My kids were self-conscious because they felt they were too old to be getting styled, though they were very pleased with their hairdos and impressed with the merchandise. 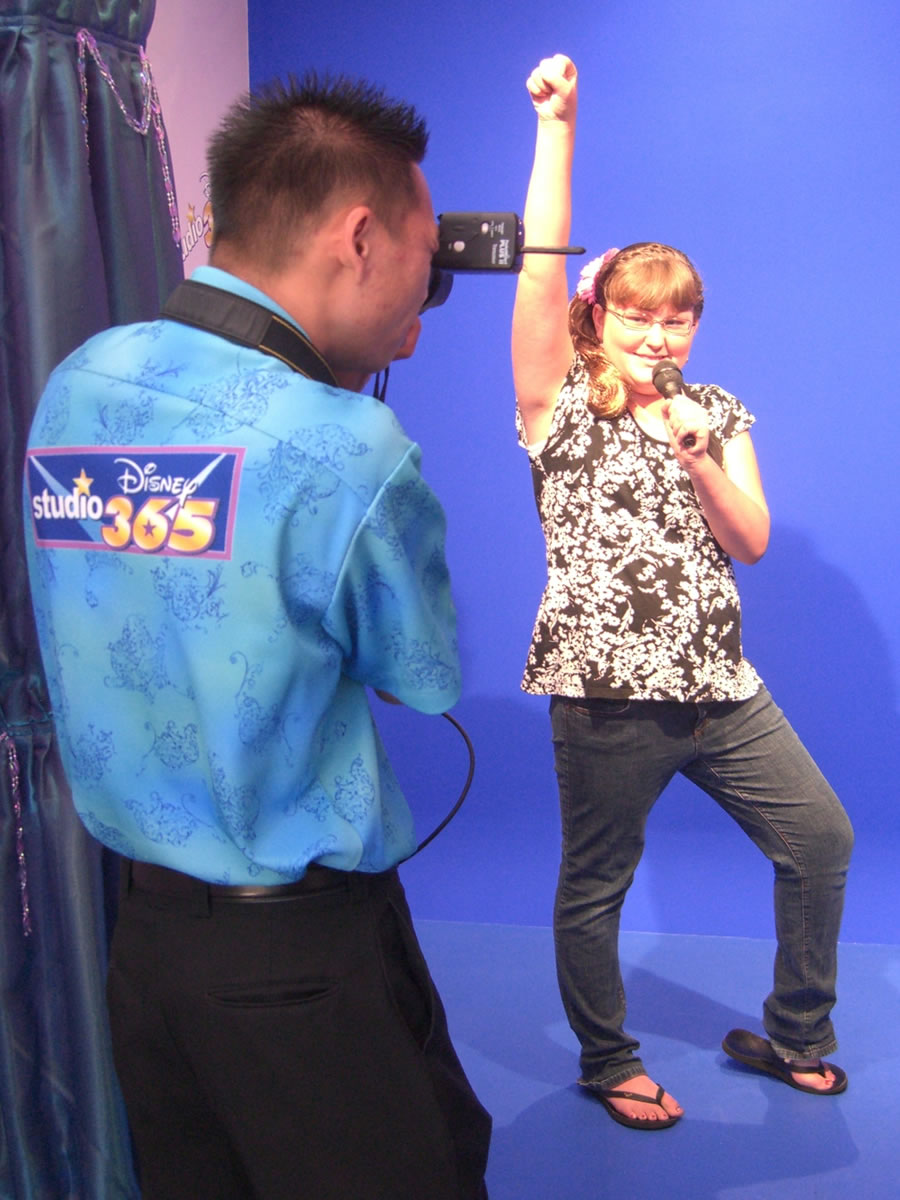 The Studio Disney 365 experience concludes with a photo shoot. Photo by Adrienne Vincent-Phoenix 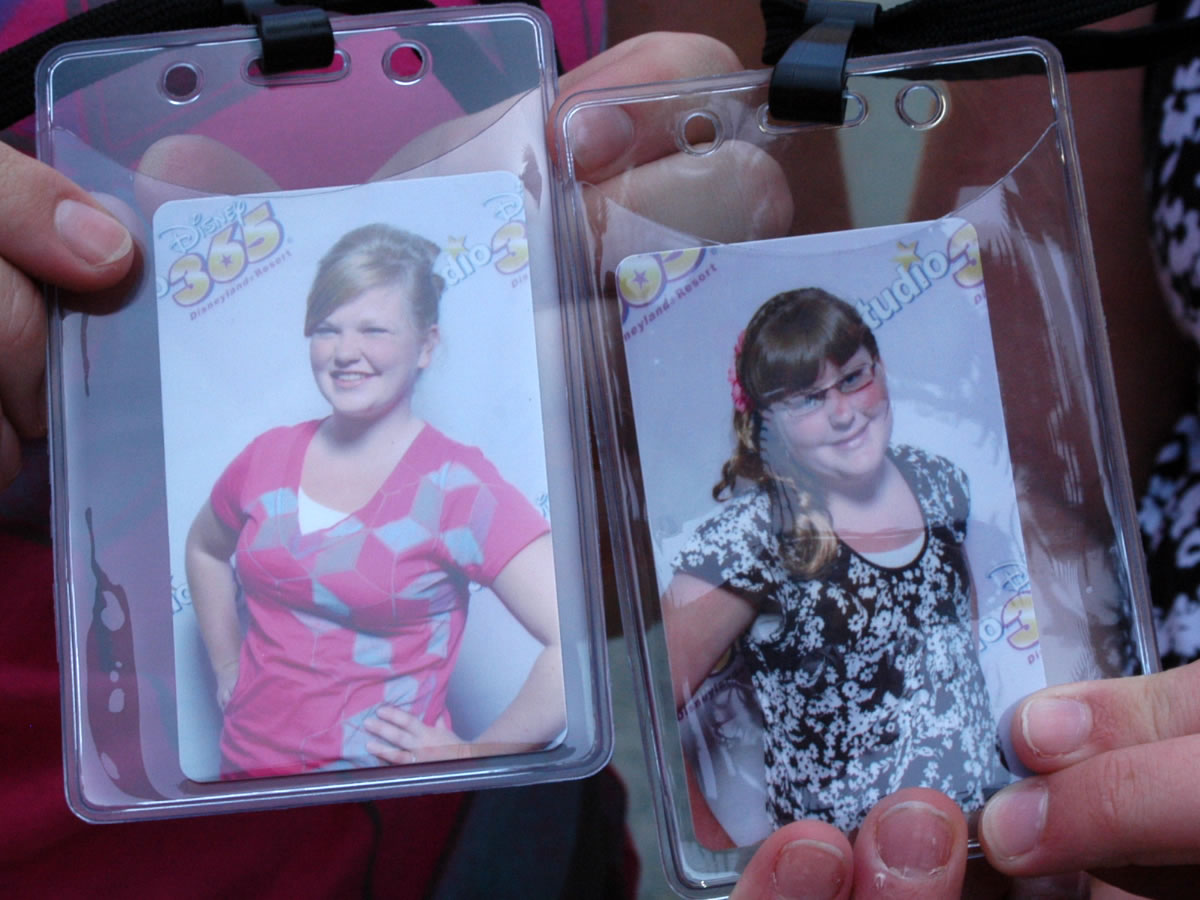 Each client receives a PhotoPass personalized with one of their studio photos. Photo by Adrienne Vincent-Phoenix

Will Studio 365 survive and thrive? I'm not sure. The whole experience was pretty fun for my girls and I expect for younger kids it would be even more enjoyable. If Disney can communicate the extras that come with the makeover—the photo lanyard, the take-away items, and the special treatment by the stylists, the cost of the experience might seem worth it to parents. People are always looking for a special birthday activity and this is an alternative to Build a Bear or something in the Parks. Additionally, the Disney Channel is very hot right now and tweens are insatiable when it comes to their favorite star or show. That fact alone will draw people to the store. Time will tell if the salon aspect will take off. 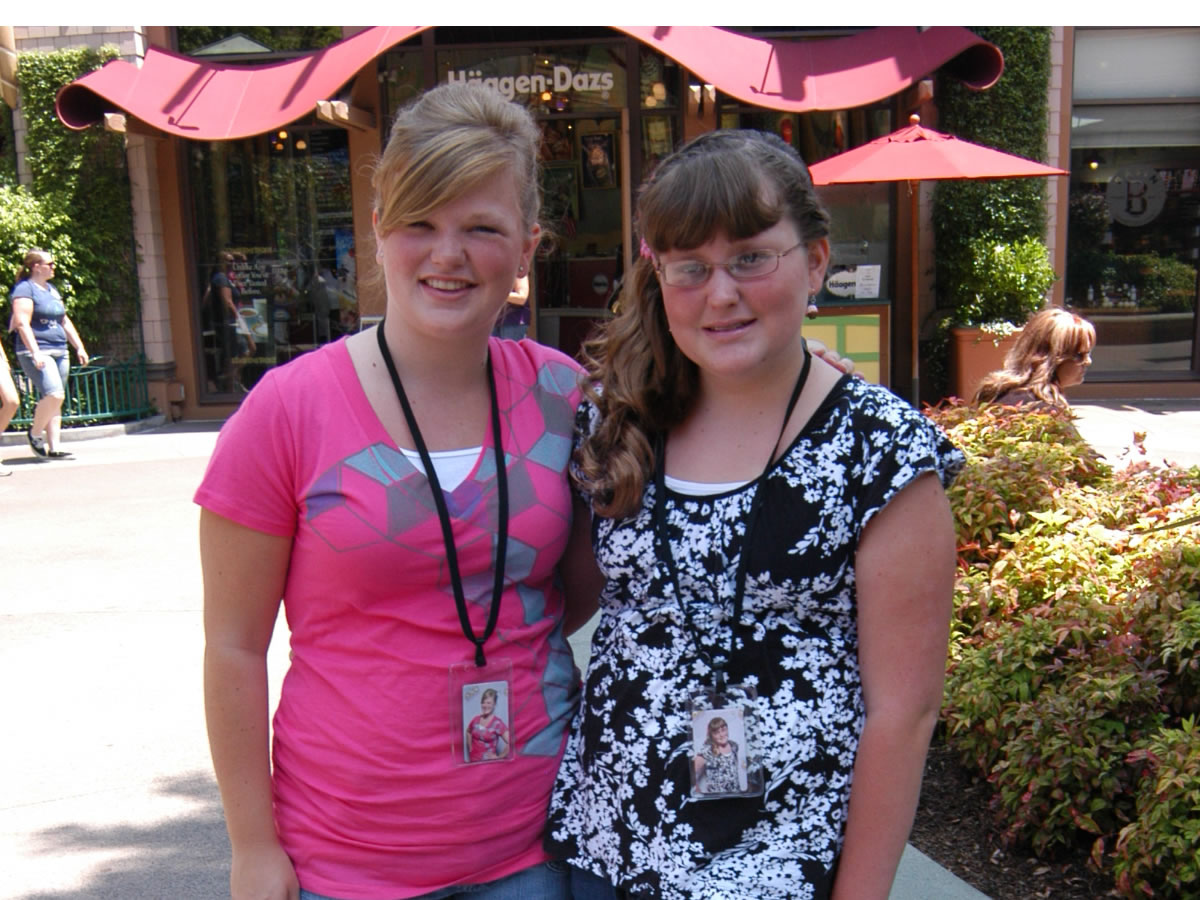 Emma and Char show off their new look. Photo by Adrienne Vincent-Phoenix 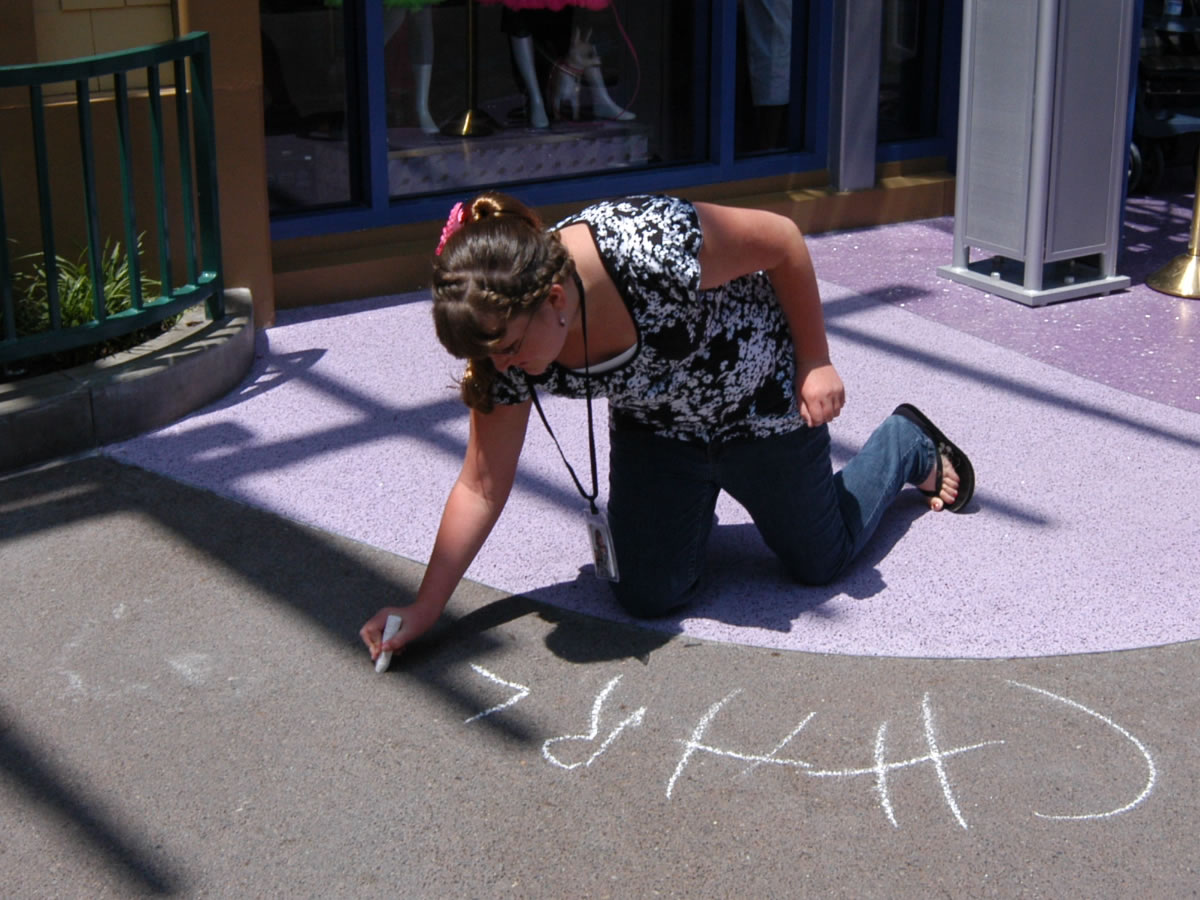 Clients "autograph" the sidewalk outside of the salon after their makeover. Photo by Adrienne Vincent-Phoenix