It's time for another review of a classic Disney movie re-released in a new edition on DVD. As usual, I'll assume you've read MousePlanet's previous reviews and have seen the movie hundreds of times... wait, what? I've just been advised that ... and this is incredible to me ... MousePlanet's only coverage of Pete's Dragon was a Kevin Krock review of the previous DVD release way back on June 25, 2001, and there haven't been any theatrical re-releases to be reviewed since MousePlanet started 10 years ago. I've also just remembered I haven't seen this movie in at least two decades, probably more like three. So let's talk about the movie a little bit, shall we? 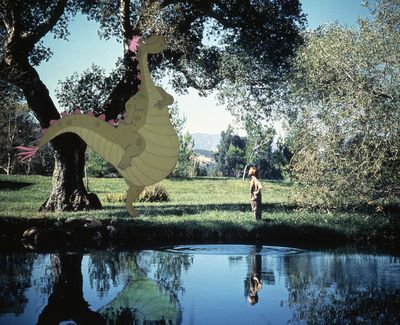 From the opening credits, you know this one is going to be something special. It stars Helen Reddy, Jim Dale and Mickey Rooney, with Red Buttons and Shelley Winters and features character actors you've probably seen in a plethora of other films. The oil-painting artwork behind the credits is beautiful and really sets the tone before the movie even begins. The presence of notable Disney names like costume designer Bill Thomas and matte artist Peter Ellenshaw gives a sense of familiarity, and seeing Ken Anderson and Don Bluth in the credits is like old home week. The overture medley segues into "Brazzle Dazzle Day" which you may recognize from the Main Street Electrical Parade—the Pete's Dragon segment, of course, though you'd long since forgotten the lyrics—and if you didn't know this was a Disney release from the 1970s, seeing Ron Miller's name as one of the producers settles it.

So now that the credits are over, how about the movie? I couldn't top Kevin Krock's summary from the 2001 review, so here it is:

This touching and music-filled story features Pete, a young orphan, and his misadventures with his best friend Elliott, a mischievous but big-hearted dragon. The movie opens with Pete running away from the Gogan Gang, his backwoods adopted family, and escaping to a small fishing town named Passamaquoddy. Once there, a kind lighthouse keeper, Nora (Helen Reddy), and her father, Lampie (Mickey Rooney) take him in. Elliott proceeds to cause trouble in the town and turn the townsfolk against Pete. Matters worsen when a scheming traveling salesman, Dr. Terminus, comes into town and crosses paths with the town's resident dragon. It's then up to Pete, Nora and Lampie to thwart Dr. Terminus and his devious plan to rid the town of the dragon for his ultimate, lucrative gain.

Even with Kevin's summary fresh in mind, it was still a surprise when the movie opened with Pete riding Elliot—who is, of course, invisible—through the woods, apparently suspended in midair. The first musical number ("The Happiest Home in These Hills") has the Gogan Gang singing about how nice they'll be to Pete if he'll only come back to live with them; of course, the Gogans really want Pete back to work their farm and do all the chores for them. A few minutes later, it's time for another song ("Boo Bop BopBop Bop (I Love You, Too)") with Pete telling Elliot how much he (Pete) loves his dragon. Pete and Elliot make their way to Passamaquoddy, trying their hardest to fit in but, naturally, Elliot tends to make that difficult. When Passamaquoddy's mayor (Jim Backus, who you'll recognize as Thurston Howell III from Gilligan's Island and a whole lot of voiceover work) gets a basket of eggs in the face, the townspeople assume Pete is at fault and chase him into hiding, where he's discovered by Lampie (Mickey Rooney). Cue the next song: "I Saw a Dragon" starts with Lampie in the town saloon and ends when he's helped home by his daughter, Nora (Helen Reddy).

More hijinks and more musical numbers follow, including the Oscar-nominated "Candle on the Water" and the aforementioned "Brazzle Dazzle Day." Probably the most entertaining scenes involve Dr. Terminus (Jim Dale) and his assistant Hoagy (Red Buttons), a couple of old-fashioned traveling hucksters.

Kevin noted in his 2001 review that the movie might be a bit long for younger viewers; I'm by no means young but I started wanting it to be over long before it actually was. It shouldn't come as a surprise or a spoiler to know that there's a happy ending.

This DVD features Disney's FastPlay. The movie and a selection of bonus features begins automatically upon inserting the disc; FastPlay may be bypassed at any time by pressing the "Menu" key on your remote. The FastPlay sequence for this DVD is "Snow White" on Blu-ray preview, The Princess and the Frog theatrical release preview, Hannah Montana: The Movie on DVD/Blu-ray preview, multi-title Disney Blu-ray trailer, Disney Movie Rewards info spot, and then the movie. After the feature, FastPlay continues with the following:

The "High-Flying Edition" of Pete's Dragon includes a decent selection of special features, some of which are noted above in the Disney's FastPlay section. 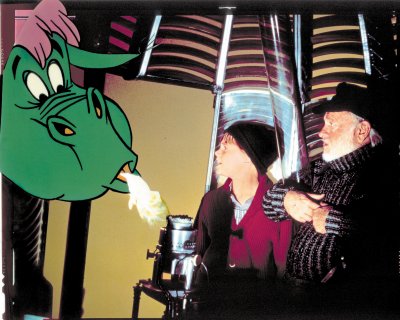 This featurette is narrated by Sean Marshall, who played Pete in Pete's Dragon, and is an excellent history of special effects in Disney movies, especially concentrating on Ub Iwerks' huge contributions to the field. It illustrates several of the processes used to combine live action and animation, starting with the Alice Comedies, through "The Three Caballeros" and Mary Poppins, and up to Pete's Dragon. There's some digression into Marshall's experiences on the movie set, as a child actor working with Mickey Rooney, Helen Reddy, Red Buttons and other well-known actors.

There are four songs in the "extras" section of the DVD, including the first demo recording of "Boo Bop BopBop Bop (I Love You, Too)" with early concept sketches of Pete singing to Elliot, plus original demo recordings (not used in the film) of "Brazzle Dazzle Day," "Every Little Piece," and a deleted song for a deleted character, "The Greatest Star of All". 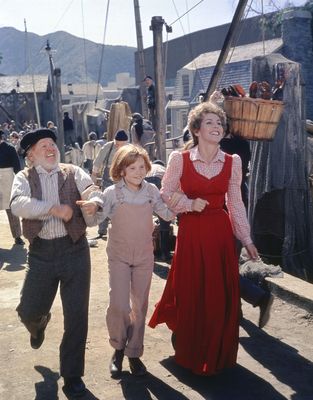 I have no particular memory of seeing Pete's Dragon in the theater or even how long ago I might have seen it last, so I don't have much to compare to the current release. That said, while the live-action scenes are bright, clear and saturated with color, the picture quality takes a sharp dive whenever Elliot appears onscreen. I suppose this must be a result of 1970s-era compositing technique, but it seems to me that most "special edition" DVDs these days have been restored and had their technical aspects cleaned up to modern standards; that is definitely not the case here.

There were a few "pops" and digital freezes, more than I would expect from a special edition DVD, but I can't rule out that I might have a defective disc. Audio quality was superior, especially during musical numbers. One especially positive note is that dialog was very clear and understandable, even when spoken by supposedly drunken characters. I often need to turn on subtitles because of muddy dialog and/or mumbling, but neither were a problem at all for this disc.

It's long. It's silly. Some of the musical numbers are, well, a bit overdone. On the other hand, anything with Mickey Rooney, Jim Dale and Red Buttons is worth seeing, and it's one of the better examples of Disney movies of its era. The special effects featurette is one of the most entertaining and informative I've seen. My recommendation for Pete's Dragon is "rent first" (or Netflix or whatever), and if you and your family like it, then by all means pick up this special edition DVD.

Everyone's home theater environment is different, and my impressions of this DVD were influenced by the equipment on which I watched it. For this reason, I'm listing the current components of my home theater.