Yes…I said it. A trip to Walt Disney World is a bargain? How can that be? Welcome back to My Disney Top 5. This time I hope to prove my time honored argument that a trip down to the biggest tourist draw on earth is also one of the best travel deals on earth.

If you speak to the average person about Walt Disney World there are several negatives that will pop up. Too crowded, too hot, and too expensive are some of the first that will come to mind. Those of us in the know can do something about the first two. I have a great picture of my wife and daughter standing in between Cinderella’s Carousel and Mickey’s Philharmagic with the castle in the background. It has to be 10 o’clock in the morning and Fantasyland is literally empty. We were there at the right time, so it’s not always crowded. This past December during MouseFest, I had to buy a Mickey thermal shirt and a fleece jacket to combat the 40 degree mornings we were having, so it’s not always hot. But what about that last one, too expensive? Is that really true?

Sure, a Magic Kingdom view room at the Grand Floridian and dinner at Victoria and Albert’s will set you back almost a grand, but nobody’s forcing you to do that. After yet another summer of searching for an alternative to Disney for our vacation (perish the thought!) I’m led back to the same epiphany I’ve had before…Walt Disney World is the best deal out there and here are my top 5 reasons why. 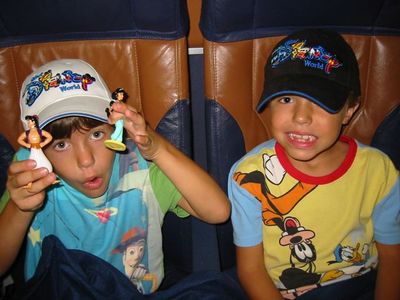 On the plane ride home. Can you guess where we've been? Photo by Chris Barry.

Orlando International is the busiest airport in the state, the third largest in the nation and handles more than 50 airlines and over 35 million travelers each year. I can always stumble upon a good deal from New York to Orlando. I’ve paid as little as $49 one-way on Southwest with a more common average of around $100. When I compare that to the handful of other destinations I’ve looked into this summer, Orlando beat them all in price and frequency of flights. 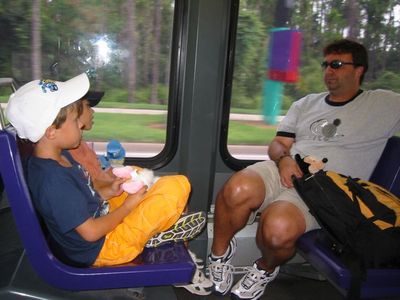 Face to face time on the bus. You can't do that in a rented minivan. Photo by Chris Barry.

Let me get this opinion out of the way; I would never rent a car when traveling to Walt Disney World. I know some people insist. They want to be on their own time and not Disney Transportation time. That’s fine for them. I love using the busses and the boats. It’s part of the experience for me. I wouldn’t trade any of those great conversations we’ve had with total strangers on the bus about our day’s magical experiences for a ride in a Hertz minivan. Considering the amount of people they transport each day, I think they do an excellent job and, staying on topic, it’s free. Let me get this straight, Disney will drive me to and from the airport, handle my luggage and then drive me back and forth to the parks all day during my stay…for nothing. Deal. 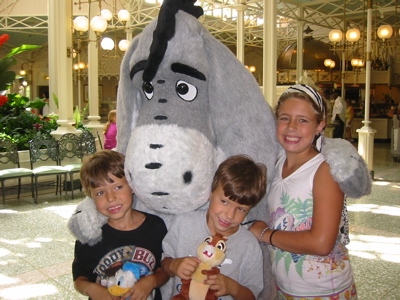 You won't find this at the local Ruby Tuesday, now will you? Photo by Chris Barry.

I don’t want to start uproar here, but I think eating in the World is pretty reasonable. We dine out a lot and I think things in the parks and hotels are on par with the rest of the world. I live near New York City where even a burger at TGI Friday’s is $20. I paid $4.00 for a bottle of water at a Six Flags this summer. The same can be said for the zoo, the beach, the sport’s and concert arenas, the ski resorts, and most other touristy places I go. I can buy water at The Magic Kingdom for $2.50. You don’t have to eat at Le Cellier every night to enjoy your trip. I love the Disney restaurants. They’re definitely part of the experience, but we’ve thoroughly enjoyed cancelling ADR”s and ordering a pizza by the pool at Port Orleans instead. 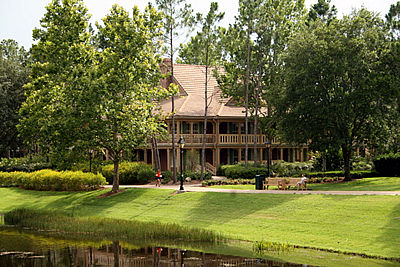 Here is where, I believe, without a doubt; you are getting bang for your buck in Orlando. We’ve primarily stayed at Port Orleans-Riverside over the past 5 years. We’ve stayed at The French Quarter and Caribbean Beach before that as well. This fall we’ll stay Deluxe for the first time at The Yacht Club. We’ve paid around $139.00 on average for our Moderate stays. We don’t travel during Spring Break or Christmas vacation, primarily summer, although we have gone in May and early December. Once, because my wife was in a triathlon on Disney property, we got Riverside for $89 a night!

For a trip this summer, I’ve explored Hershey, Williamsburg, Montauk, various places up and down the east coast and Florida and I can’t begin to getting a price as good as $139.00. None of these places even come close to offering me as much as I get at a place like Riverside; seven pools, restaurant, food court, horse and buggy, bike and boat rentals, free boat ride down river to The French Quarter and Downtown Disney and all topped off by excellent Disney service and resort theming.

On top of that we’re a family of 5. Don’t even get me started there. Nobody wants 5 in a room. “Sorry, no roll-aways.” “Rent 2 rooms or a large suite.” Riverside has trundle beds in the Alligator Bayou section. The Beach, Yacht, Boardwalk, Polynesian and Contemporary have daybeds. Even the Value resorts have the family suites.

$300 a night for a Montauk or Jersey Shore motel with a postage stamp sized pool, no AAA discount accepted possibility of a 2nd room and, I’m not making this up, 4 night minimums at some places, or $139 a night for Riverside, Caribbean Beach, French Quarter or Coronado Springs? How can you question the value? This fall, we’re paying $200 a night at The Yacht Club thanks to a 40% pin code I received in the mail. What a deal that is!

1 – Look What You’re Getting in the Parks! 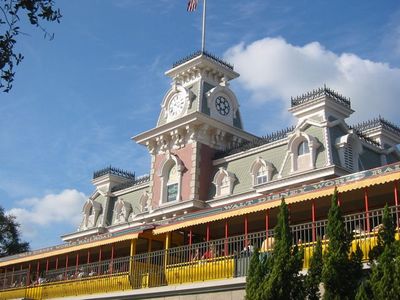 I like to use the analogy of a hockey game at my local arena. Bad seats are about $70 each. I’ve spent $350 to walk in the door with my family. I’m not even going to bother adding in drinks and food. You can guess what a rip-off they are. There’s 2-3 hours only of an evening costing close to $500. This fall, using the AAA price, we’re getting a 5-day park hopper for each member of my family. It will end up costing each of us about $55 or about $275 for a day. Considering the offerings from all 4 parks in one day, the attractions, shows, parades, Fastpass, fireworks, animals, characters, transportation, atmosphere and general unbeatable magic and treatment from the cast members, it’s a heck of a deal. Sure, I can get into Six Flags for a day for just under $200 for my family, but am I getting anything even remotely close? I think not.

Plus, you can’t put a price on the looks on all of our faces when we get drunk on that Disney magic. It never really wears off. That’s worth the price of admission alone, isn’t it?

Here’s my bottom line. I don’t work for the company. If you read my last Disney Stuff article, you know I have only 1 share of Disney stock. I’m just a guy who’s been planning trips for years now and I keep coming to the same conclusion about the word’s most popular travel destination. I’m not saying Walt Disney World is cheap. Some things are more expensive than others. The money can certainly flow fast; I concede that. However, overall I’m getting so much more from a Disney vacation than I am anywhere else that I feel it’s safe to call it a bargain. For me, the resorts alone are the best deal out there. So, the next time somebody tells you they won’t go to Disney because it’s too expensive, just send them my way and I’ll convert them. Or, agree with them and that’ll save some room there for the rest of us.