Welcome to another MousePlanet parenting panel. This week’s question has to do with those loveable characters that roam the parks whose only job is to interact with guests, take pictures and sign a few autographs. What could be more friendly? Unfortunately, some children can find characters at the park intimidating—and what is meant to be a happy experience can turn into a scream-fest and a hasty retreat. We asked a few experienced parents: How do you handle your child's fears over meeting characters in the parks? What has worked well, and what has backfired?

Our first contributor is Mary Kraemer, a travel consultant with CruisingCo/MouseEarVacations. She loves to travel with her husband and four children and is an avid Disney fan who visits Disneyland several times a year—and Walt Disney World and the Disney Cruise Line as often as possible. Mary writes:

A couple of my kids have never been fearful of Disney characters, but it took one of my kids several years before being able to tolerate being anywhere near a character. Every child is different, has his or her own limits, and it’s advisable to respect his or her individuality.

It’s a mystery as to why some kids aren’t bothered and others are terrified. I wish I could give you a magic solution to turn the terrified child into one who isn’t fearful, but I think the only advice I have is: Patience and Time.

Before a trip to a Disney theme park, we made sure that we made positive comments about various characters as the kids watched videos: “Oh, look at the silly old Pooh Bear; isn’t he funny?” or “Ariel is so pretty and she’s got such nice friends.” We would look at photos taken of characters at Disneyland and make funny comments to make the character seem less ominous : “Remember when we saw Pooh Bear at Disneyland? He looked like he was trying to find a pot of honey." This provides a positive association between the characters they’d seen on video and what they’d seen (or would see) at the park.

We prefer character meals rather than standing in line to meet them at the park, which allows anxiety to build up to the moment when it’s “your turn” to go approach the character. At character meals, the kids can watch the characters circulating around the dining room, interacting positively with families, and it also gives a more graceful "exit option" than bailing out of line in tears. So, for us, it was no big deal when one child decided to hide under the table while the other children smiled for the camera and hugged the character.

We never "pushed" our kids to pose with characters and, gradually, on their own, even the shyest one finally dropped the hesitation and could reach out to touch the character’s hand, well before being able to hug the character. I give the cast members who play characters a lot of credit: They let the kids decide as to whether they’ll get a hug or a handshake—or nothing at all. They really have a good ability to read how they’ll be received.

All that said, the character my kids have most consistently avoided at the park: Santa. Go figure.

MousePlanet’s own Adrienne Vincent-Phoenix has an interesting perspective on character interactions with children:

I've had a few opportunities to take the children of friends or relatives to Disneyland while babysitting them, and it's a completely different experience when you're visiting with a small child who has their own wants, needs, fears and agenda! I was visiting Disney's California Adventure with Adrienne Krock's oldest child, who was younger than 3 at the time, when we came face-to-face with Flik near the entrance to a bug's land. I'd planned to take Matthew right up to say "hi" to Flik, but he started screaming as soon as he saw the character.

Consider it from the child's view: You're strapped in a stroller, can't control your direction of motion, and there's a 6-foot ant hovering over you. That very fear is the premise behind Walt Disney World's popular Alien Encounter, and there are plenty of grown adults who avoid that attraction!

After Matthew protested, I pulled the stroller back so he could watch Flik from a distance. He really seemed interested in the character, but he did not want to be too close. After a few moments I asked if we could get a little closer, and he nodded yes, so we took like a step forward. Then I asked again, and he said yes, and we took another step. I kept going until he said "no," and that was it. I let him control the situation, and he ended up being way closer after doing these "steps" than he was when he initially got scared. We never did get up-close and personal with a character during that trip, but we didn't spend the rest of the day completely avoiding the characters, either.

Another tip I've learned is to talk to the character and let them know what's going on. Characters encounter anxious children every day, and they are definitely not interested in scaring a child. When I've been with a child who is afraid of characters, I've been known to say something like "Hi Minnie, we're just going to watch you from over here," and that lets the character know not to come too close. This is especially useful in situations like character meals where the characters are mingling with the crowd, instead of just standing in place in a signing queue. Holding the child in your arms can also help because it puts the child at eye-level with the character, so long as your child trusts that you're not going to force them to get too close to the giant Mouse.

MousePlanet columnist Lisa Perkis says her proudest accomplishment in life is being a mom to Emma, 15, and Charlotte, 12. She has also taught preschool for 19 years in her hometown of San Diego. She and her family visit Disneyland as often as possible and have had annual passes for 12 years. Lisa writes:

One of my more vivid memories of taking my youngest to Disneyland when she was a toddler was holding her on my hip and walking up to sweet, friendly, beautiful Cinderella. She held out her white-gloved hand to my daughter to greet her and Charlotte promptly slapped her hand away and screamed. The gloves were apparently not to her liking! Actually, who knows what goes through the mind of a 2 year old, especially one overstimulated by all the sights and sounds of a busy park. My youngest took her time to warm up to any of the characters, face or rubberhead. I learned quickly that a character seen from far away is much more interesting and "safe" to a wary child. We would often sit on the Main Street train station platform and observe the characters greeting people down on the street. Even better was watching the parade—Char knew the characters would (usually) walk right on by and not single her out for attention. Gradually she became used to seeing the characters up close after many visits.

The key to turning the corner in her anxieties over characters came when we handmade our own autograph books to take to the park. We put stickers on each page of characters we hoped to see and came armed with thick sharpies and great resolve to get as many signatures as we could. Big sister Emma was an invaluable encourager as she was very enthusiastic over seeing characters. Once Charlotte saw her first real autograph–Ariel, illustrating her name with little bubbles and curliques, she was hooked. The book offered a distraction—she barely thought of how close she was getting to a particular character; she just wanted that little piece of artwork. 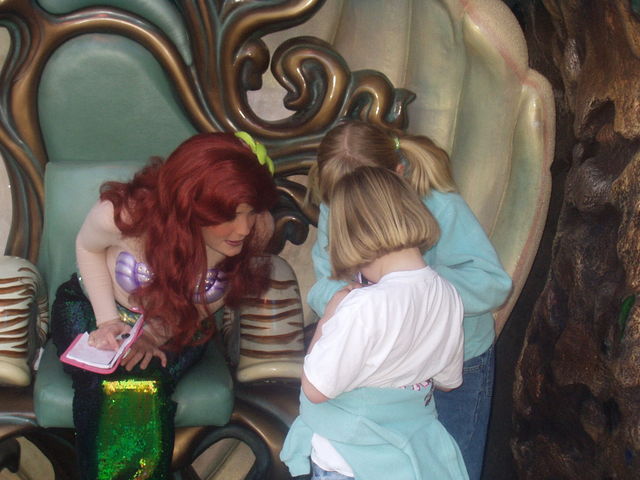 Too busy checking out the artwork to notice she is near a character. Photo by Lisa Perkis

Even after the autograph fever faded away, Char has felt comfortable with saying hello to characters for the most part. She still refuses to get near to Captain Hook; something about his ugly rubber face just creeps her out. But, that's fine—he is pretty sinister, and there are many other entertaining characters to interact with at Disneyland.

It's your turn: Keep the discussion flowing! Visit the Parenting in the Parks section of our MousePad discussion board and share your character interaction experiences or send your suggestions via e-mail. Reader-submitted tips might be used in future articles and you might be called upon to contribute to future panel discussions.