This week, we’re back for the third and final installment of the “Best of Walt Disney World” for 2009. In Part One we took a look at the Best of Disney World resorts, attractions and shows. In Part Two, the focus was restaurants, food and dinner shows. In this closing segment we’ll finish up with some more food and drink. Ready? 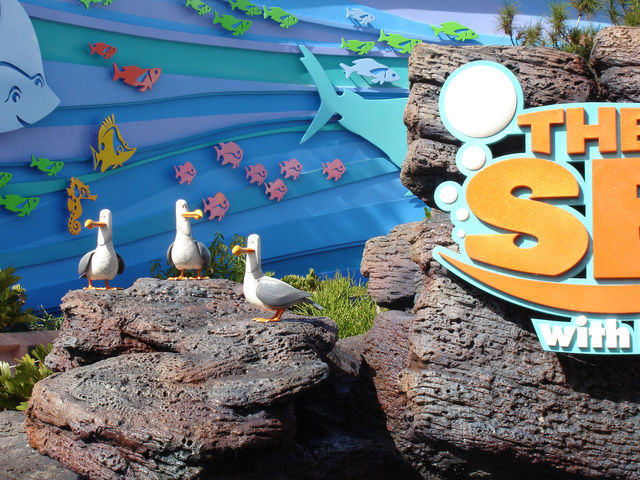 OK, the Coral Reef is next door but you get the idea. Photo by Steve Russo.

Personally, I’ve not tried the Coral Reef and the reports I’ve seen seem to vary significantly in their ratings. It must have something going for it to capture 24% of your votes so I guess I’ll need to try it. I can recall reading a recent article by Len Testa that summarized his recommendations for how far in advance you need to call for a Disney World restaurant reservation and the Coral Reef was, surprisingly to me, at the top of the list.

Strange category, huh? Wings are, more or less, pub food and I thought I’d list it to get your choices and maybe find another source to satisfy my craving. Only four places received your votes as follows: 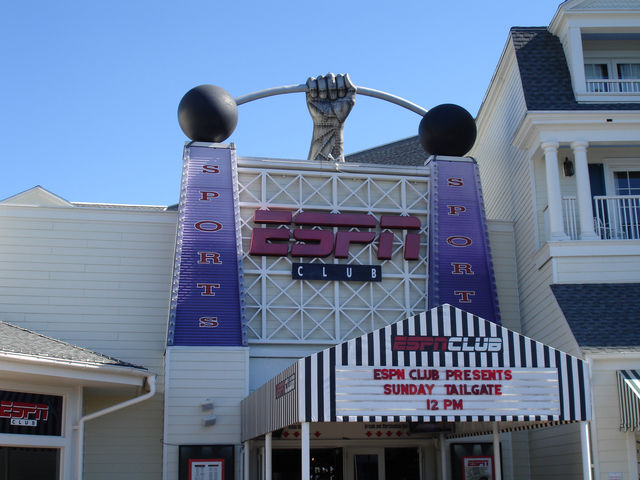 If you’ve ever read one of my trip reports, you realize that a Russo tradition (and a very important one at that) is at least once during each Disney trip, you may (must?) substitute ice cream for a meal. Yes, it’s just that important to me. Your choices…

I’m getting that craving just reading the finalists. The rest of your votes were split among some favorite places like the Plaza Ice Cream Parlor, Ghirardelli’s and Seashore Sweets; as well as some favorite items like Frozen Bananas, Oreo Ice Cream sandwiches and Cookies & Cream bars.

I probably should have reversed the order here but, instead, we’ll move from dessert to the entrée.

I’ve eaten at all three of your top choices and I consider myself a bit of a steak connoisseur. I know that Le Cellier is extremely popular with the masses but I would have ranked it down the list quite a way. That is based on a so-so New York Strip Steak and a sub-par Prime Rib. I have not tried the Mushroom Filet that seems to be a favorite of many. Nevertheless, my opinion doesn’t matter (for this column anyway). 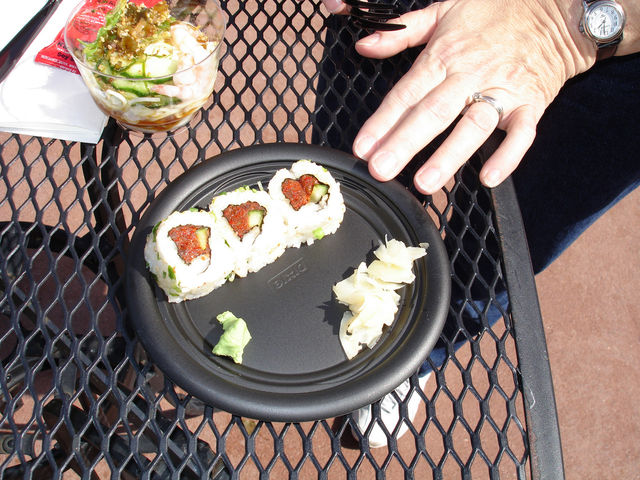 This category received the fewest votes of any other, just ahead of the Best Vegetarian Restaurant. So, I’ve learned that you guys like meat, particularly steaks and burgers, but sushi… not so much.

What’s interesting is the next four choices tied for third place with each receiving 11% of the vote: California Grill, Wolfgang Puck’s, Yakatori House, and… “yuck”. Yes, that’s right… “yuck” received 11% of your vote. I would urge those of you that voted for “yuck”, and have never tried sushi (and I’m certain that at least a few of you fall into that category), give it a whirl. Start with something simple like a Spicy Tuna, Vegetable or California Roll—you might be pleasantly surprised.

Bringing up the rear, behind “yuck” (I’m never going to tire of this) is Benihana's, and the Kona Island Sushi Bar at the Polynesian. How demeaning it must be for a restaurant to finish behind “yuck” (I told you I’d never tire of it).

I thought I’d be impressed if anyone knew one beyond the ESPN Club and, as usual, you came through with some great choices.

The ESPN Club was certainly the one most of us are familiar with but… I hadn’t even considered the Victoria Falls Lounge at the Animal Kingdom Lodge – Jambo House. Once I saw the first vote come in, I remembered having a first-afternoon-of-the-trip beer there while watching a couple of NCAA football games. Great choice!

I also can recall having lunch at the (then) All Star Café, and enjoying it. In those days, we would visit the NFL Experience with our young son and spend some time punting, passing, kicking and running their obstacle course. It was a lot of fun and you haven’t lived until you’ve seen my wife attempting a 20-yard field goal. Unfortunately, we haven’t been back in probably eight or nine years. Has anyone been there more recently? Is the NFL Experience still operating?

Best Place for a Cocktail 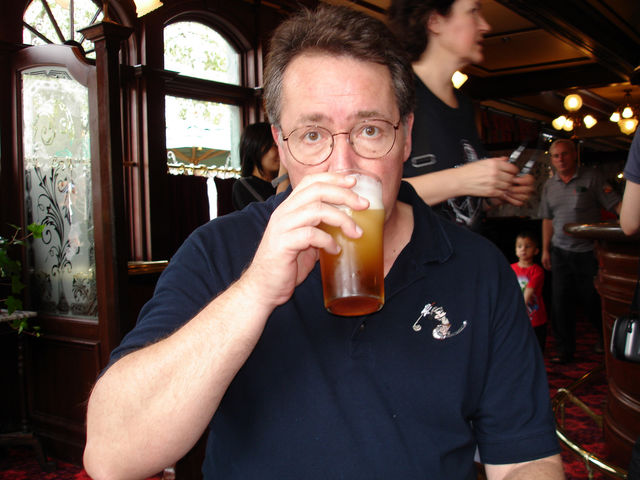 It came in second, but the Rose and Crown serves a fine brew. Photo by Steve Russo.

One of the advantages of growing older (and there aren’t many) is taking those “adults only” trips to Disney World. One of my favorite things to do, at the end of a long hard park-touring day, is to sink into one of the soft-cushioned chairs or sofas at the Belle Vue Lounge and enjoy an adult beverage while I listen to Jack Benny or Amos ‘n’ Andy on one of their radios. We always find it a great place to rehash the day and plan the next one. Unfortunately, you gave my favorite place no love. Your choices are:

As you can see, the voting here was tight. More than a few selected various spots around World Showcase to grab a drink, sit and people watch, so I lumped those votes together. By the way, most of those suggested a drink from the kiosk in France.

The remaining votes were spread far and wide and included:

So many bars… so little time.

I anxiously awaited your votes here. While it’s possible to get a good cup of coffee at Disney World, it ain’t easy. Most on-site establishments serve that nefarious coffee substitute, Nescafe. In my opinion, Nescafe is to coffee what Dr. Pepper is to a bocce ball. So where can one go for a good cup-o-joe at the World?

Most of the Boma votes specifically address the use of a press pot. I’ve also had the French press coffee at Narcoossee’s and it was very good. The spots you liked also include:

I’ve been to all three but have only had the shakes at Sci-Fi… and they’re very good and very thick. Your other choices include Ghirardelli's, Whispering Canyon Café, the Plaza Restaurant, Mrs. Pott's Cupboard, the Enchanted Grove, the Fountain (at the Dolphin), McDonald's, Min & Bill's Dockside Diner, and the Aloha Isle. 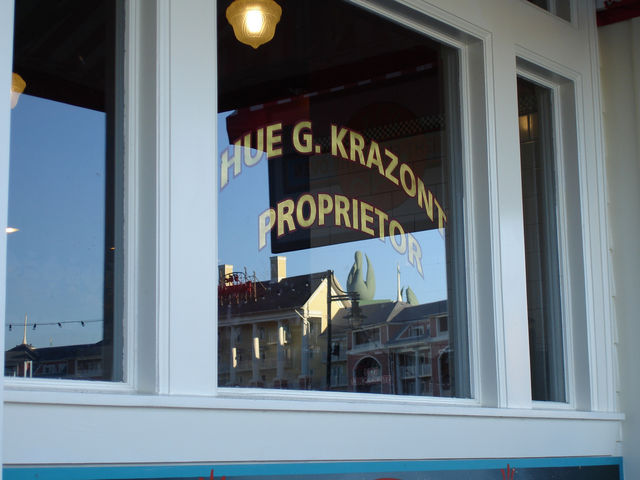 Hue G. Krazont. Get it? Photo by Steve Russo.

I get hungry just thinking about this one. Your choices are:

All great choices. One of my favorite things to do is to grab a pastry and coffee from the Boulangerie Patisserie just before finding a spot for Illuminations: Reflections of Earth.

That wraps up the Best of 2009 selections. One last time… a hearty thanks to everyone who contributed. I sincerely appreciate you taking the time to fill out a ballot and send it in.

Before I leave, several of you also sent in some additional categories for next time and I think they’re good ones. I’ll list them with my favorite to get you thinking.

Assuming we do this again next year, I’ll add them to the list.

So what did you think? Was your choice the popular one? Did it make the list? Do you agree or disagree with the choices? Lastly, do you think it’s worth doing again next year? Let me know and thanks for playing.