Roy Edward Disney, son of Roy Oliver Disney and nephew of Walt Disney, passed away last Wednesday after a battle with stomach cancer at the age of 79, one day after the 43rd anniversary of the death of his famous uncle and four days before the 38th anniversary of his own father's death. Roy E. Disney started at Walt Disney Productions as an assistant film editor on the True-Life Adventure series. He eventually became a director and producer for nature films before Walt's death in 1966. He eventually became a member of the company's board of directors and was instrumental in the coup that brought Michael Eisner and Frank Wells in to run Disney, as well as the coup that kicked Eisner out 20 years later.

Roy Disney was also responsible for the saving and reinvigoration of Disney animation, stopping Eisner from disbanding the animation studio and setting the stage for the second Golden Age of Disney animation, starting with The Little Mermaid, Beauty and the Beast, Aladdin and The Lion King. He was behind the creation of Fantasia 2000, in some part renewing Walt's vision of a perennial concert film that would periodically change the concert program, and behind the completion at last, after many decades, of "Destino," the animated Disney collaboration with Salvador Dali. In recent years, Roy Disney had taken on the role of protector of his family's legacy and standards at the company.

Disney was an accomplished and highly competitive sailor, winning the TransPacific Yacht Race on multiple occasions. 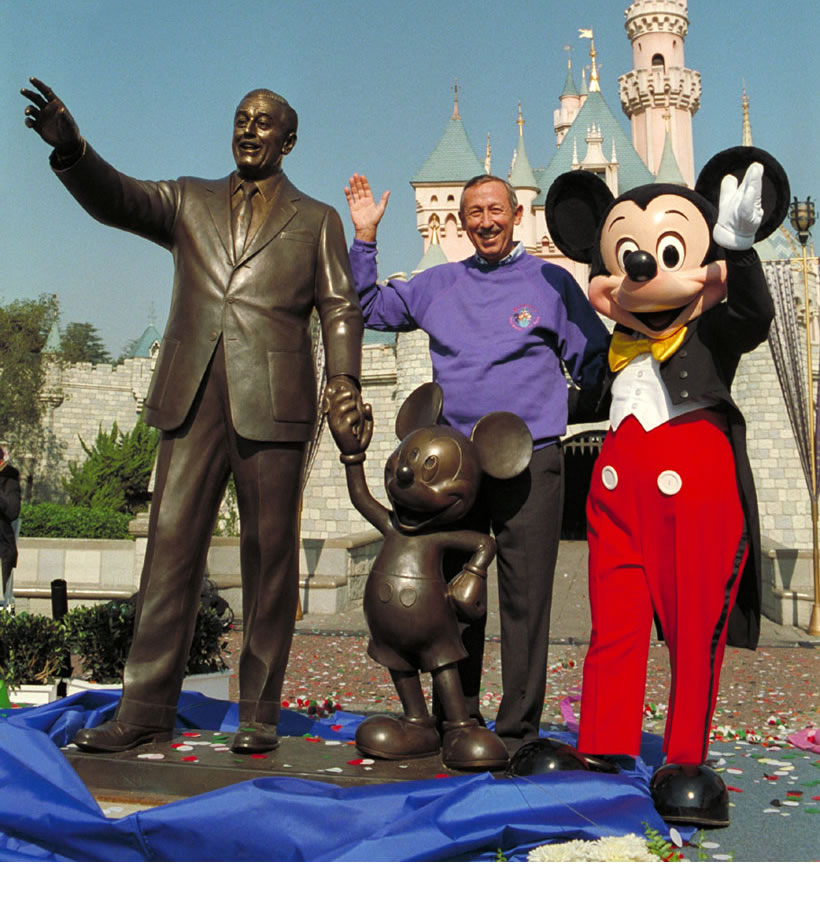 As Robert Iger said in a statement, "He was much more than a valued 56-year Company veteran—Roy’s true passion and focus were preserving and building upon the amazing legacy of Disney animation that was started by his father and uncle."

Flags will be flown at half-staff at Disney Parks and Resorts for one week, through December 23, in his memory.

We here at MousePlanet send our deepest condolences to the Disney family and to the friends of Roy Disney. In lieu of flowers, donations can be made in his name to the California International Sailing Association (link) to benefit youth sailing or to The Roy and Patricia Disney Family Cancer Center at Providence Saint Joseph Medical Center (link) in Burbank, California. For more information about Roy E. Disney's life and legacy, please see Wade Sampson's article.  "Remembering Roy Disney" from last Thursday and David Koenig's article, "Roy Genius" from last Friday.

In addition to the New Year's party lineup that we told you about back in October and the special Wishes fireworks dessert party we noted in November, we've got two more events to tell you about if your plans are still up in the air.

Atlantic Dance Hall at the Boardwalk Resort will host an adults-only (21 and up) party from 8 p.m. to 2 a.m. on New Year's Eve. For $35 per person, you get a dance party with a complimentary champagne toast at midnight. For $65 per person, you also get private access to a VIP area, complimentary miniature desserts and coffee and an exclusive fireworks viewing location. For information and reservations, call 407-939-2431.

If you'd rather be further from the parks, Rix Lounge at the Coronado Springs Resort will host A Decade of Style presented by JCruzStyle. Tickets are $15 in advance or $20 at the door. There will be a DJ playing 10 years of hits and a free champagne toast at midnight. For more information or to purchase tickets, go to the JCruzStyle Web site (link). For updated event information, go to the event's Facebook page (link).

Adventures by Disney add-on available with Disney Cruises this summer

With excursions in Malta, Tunisia, France, Corsica and many stops in Italy, there are many opportunities for special Adventures by Disney moments. Onboard events include a wine tasting at Palo, private receptions, and more.

You can book your cruise reservations through the Disney Cruise Line Web site (link), via a special Disney Cruise Line Reservations phone line (888-272-0571) or through a travel agent. MousePlanet's preferred Disney travel providers are MouseEarVacations.com (link), Small World Vacations (link) and Get Away Today (link). If you've already made a reservation for a cruise and are looking to add the Adventures by Disney experiences, please contact whomever you made your original reservation through.

Examples of the new additions include a Royal Ball at the Catherine Palace in St. Petersburg, Russia, hosted by Disney princesses or a tour of Florence where parents and children begin together and then separate into a fresco painting class for children and a continuing tour of the Palazzo Vecchio for parents.

Other special adventures include a Sidi Bou Said Treasure Hunt in Tunis that guides families through the local culture and customs and a Tuscan Cooking School and Wine Tasting in Florence.

…It appears that a new pizzeria will be coming to Epcot's Italy pavilion. A construction permit has been filed for construction of the new pizzeria, naming the Patina Group as the owner/operator of the facility. Patina also owns and operates Tutto Italia.

…Problems on the Walt Disney World Monorails continue, as a monorail encountered technical difficulties Tuesday night at around 6:00 and came to a halt on the Express beam between the Transportation and Ticket Center and the Contemporary Resort. It took about half an hour for them to be towed to the next stop and be let off. No word on whether this was related to the issue that stopped seven monorails on the track for 2 to 3 hours early last Sunday morning when power was cut to all three monorail beams.

…A queueless standby wait area was tested Tuesday through Thursday at Rock 'n' Roller Coaster at Disney's Hollywood Studios. This appears to be an early test for the queueless standby area for the proposed new "Double Dumbo" attraction coming to the Magic Kingdom park in 2012. For more on what the queueless wait area looked like and how it worked, check out the photo tour at StudiosCentral.com (link).

…More discounts are expected to be announced this week, perhaps as early as today. Look for the new discount to be promoted on Friday's broadcast of the Disney Parks Christmas Parade.

…We somehow missed mentioning it earlier, but Star Wars Celebration V will take place at the Orange County Convention Center August 12-15, 2010. The world's largest Star Wars fan convention, presented by Lucasfilm, will be visiting Central Florida for the first time. Lucasfilm is working with Walt Disney Wolrd to cross-promote and create other fun fan opportunities. Lucasfilm is planning for 30,000 attendees over the course of the four-day event. If you can't make it to Orlando for Star Wars Weekends, or if there's not enough Star Wars events for you at those events, start planning your trip for mid-August now.

…The Contemporary Resort has a new culinary team member. Award-winning pastry chef Jeff Barnes has come to Disney from the Amelia Island Plantation.

…The 2010 Walt Disney World Marathon is now at 97 percent of capacity. The Walt Disney World Half Marathon, Goofy's Race and a Half Challenge, Disney/Pixar UP & Away Family Fun Run 5K and Mickey's Marathon Kids' Fest are already sold out. Your only shot at getting into the Half Marathon or Goofy's Race and a Half Challenge would be to contact one of Disney's group or charity registration aggregators (link). Time is running out! Register now (link)!

The number of rooms available at these rates are limited, and minimum length of stay requirements may apply for Friday or Saturday arrivals. You can only book these rates through December 31, 2009, so book now!

Passholder discounts through end of 2009

Passholder rates for August 9 – December 24, 2009 have been released. Rates are available for all dates except for November 25 – 28, the Tuesday through Saturday of Thanksgiving week. Under this promotion, the starting rates at these resorts are:

The Disney Dining Plan may also be added to these discounted reservations. The number of rooms available is limited and minimum length of stay requirements may apply for Friday and Saturday arrivals. These rates may be available through your date of arrival. Reservations may be booked through the Passholder web site or by using codes EQA (8/9-10/3) or NBM (10/4-12/24) if booking via the Passholder phone line (407-939-7722) or through a travel agent. MousePlanet's preferred Disney travel providers are MouseEarVacations.com (link) and Small World Vacations (link).

Now is a great time for families to book a Disney cruise, as the Disney Cruise Line has announced a "Kids Sail Free" promotion for most 3- and 4-night Bahamian sailings from January 7 through through April 15, 2010 and 10- and 11-night Mediterranean sailings from April 24 through May 26, 2010.

Children age 17 and under can sail free when traveling with two full-fare guests in the same stateroom, though government taxes and fees must still be paid for the kids. The offer applies to stateroom categories 4 through 12 and the number of stateroom categories are limited. Other special offers, discounts or onboard credits to not apply, though additional terms and conditions may apply.