Raising a Lost Boy - And Girl - from Neverland

I decided to take a break from my business articles to speak closer to the heart.

You think about a boy that never grows up. I have one of those. Indeed, I have a girl, as well. In truth, I have six children. They are all fantastic. But my two youngest are very unique and deal with autism. As a father, that's where the adventure really begins.

If you have followed my articles at all, you know that I've alluded to this matter on occasion. For those of you who aren't familiar with autistic children, they are the ones you meet at the park that seem different. They don't usually have any visible handicap. But there's something not right, and you can't quite put a finger on it. You can tell a child struggles with autism because often their social interaction might be limited (my older daughter) and/or the communication is limited (my younger son). Repeated and rote behaviors occur, as well. Within the world of autism, the spectrum varies greatly.

Outside of Disney, both of my kids have special programs and classes to help them progress at school. They are making progress—the teachers will be the first to note that. Still, it's a mixed blessing. I truly feel I'm caught in a Peter Pan movie. You want them to grow up. Shouldn't we all grow up? You certainly don't want them unable to deal with life at 30.

So what does that look like to an annual passholder at Disney, where we spend a few hours each week at the park?

Well, thank goodness for an annual passport. If this was a one-time event or a special occasion, we would want to spend every minute of the day in the park. That would probably lead to many more meltdowns. For us, we get to go for a few hours. And, for the most part, that works out fairly well, provided you are on their terms. For instance, on Monday I took my 11-year-old daughter with her older sister to the Magic Kingdom at the close of day. In the course of three hours we experienced 10 attractions, including some of her favorites like the Astro Orbitor and Buzz Lightyear Space Ranger Spin—where she had more points than her sister. 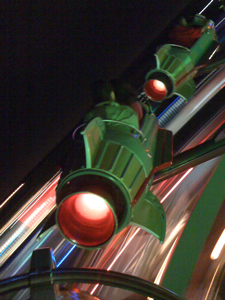 My daughters on the Astro Orbitor. Siblings are an important factor in supporting your autistic child. Photo by J. Jeff Kober.

At the end of the day, she rode Big Thunder Mountain for the first time. She loved it! It was a great event. But stepping off the ride she panicked at pre-show announcements for the fireworks. We tried to rush her back toward Main Street so she could wait out the fireworks inside the store. As we stepped back through the Adventureland entrance toward Main Street, the entire area around the Crystal Palace was blocked off. We had to go into the crowds in Central Plaza and back up the street to get to the nearest shops on Main Street. The whole time she was frantic and anxious. We walked into Casey's as the first boom went off. She motioned as if ducking herself from an oncoming air raid. In the process, I became separated from my older daughter, and it took another 20 minutes to find each other.

Such are the kinds of encounters we have had in the parks.

With these children, there are attractions and activities we never seem to do. We have little if any photos of us with the characters. My daughter doesn't do characters. Neither does she want to come to the parks with my 7-year-old son who experiences autism. That's because of a terrible experience I had with the two of them alone last year at Epcot. She didn't want to go on what he did. And he didn't want to do what she wanted to. He had the meltdown first. Then she did. And then finally I did by the time we got back to the car. It was not a pretty picture. And she won't go back there with him unless both mom and I are with them.

For my son, it's even more challenging. Saturday, I took him to Epcot. He loves Spaceship Earth (there's a horse in it), Universe of Energy, Finding Nemo, Circle of Life, and Gran Fiesta Tour (attractions I have ridden way too many times this last year). Maelstrom is out. Soarin' is out. Journey Into Your Imagination is out. And don't even think about Mission: Space or Test Track. Illuminations? Not in your wildest dreams.

Each park has a set of attractions he likes, and it's all you can do to get him to try something else. Do his preferences make sense? Yes and no. He loves dinosaurs, Finding Nemo and The Lion King. So the fact that he chooses those three make sense. But he's very anxious about loud, booming noises. And yet he has come to tolerate a very "Big Bang" during the Universe of Energy Film.

He also loves the Great Movie Ride (it, too, has a horse). Somehow he discovered that watching YouTube. YouTube can be a great way to get your kids into going on a ride. The Disney videos we bought in the parks he plays over and over. He's practically ruined some of my Disney pictorial books because he loves to look at them. Through those mediums I've gotten him to try new attractions. But not all. He will do Lights! Motors! Action! (because he likes cars?). But he won't do Star Tours or Indiana Jones or Catastrophe Canyon because of the noise factor. It's difficult to make complete sense of it. 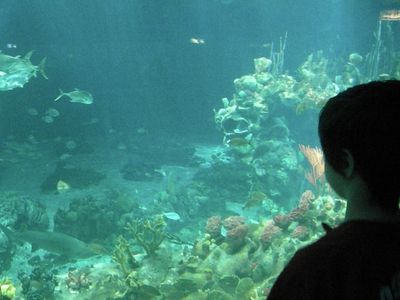 Gazing into the Living Seas. This is a favorite for him and he could gaze into it for hours looking for sharks. Photo by Jennica Kober.

I found him one day asking for particular Festival of the Lion King videos from YouTube while playing with his toy elephant. I soon realized that every video he selected to watch was one where the elephant was filmed in the background. He was mimicking every move made by the elephant in the show.

There are things he does that surprises me. Amazingly, he looks at an aerial map of the park, and points to where he wants to go. He gets it spatially, though when you think about the maps, attractions never look anything from the air like they do from the ground. He knows where the car barn is at the Magic Kingdom (where the horses are kept); where to go to see Lightning McQueen at the Studios, or where the Finding Nemo show is at Disney's Animal Kingdom. Speaking of such, he loves Finding Nemo the Musical—the preshow. What preshow? The one where clownfish is seen swimming through the bubbles on each side of the proscenium. He will watch that for hours if we let him on YouTube and then he wants to see it in the park. But when the show starts, he buries his head in my lap and refuses to watch any of the show. He does much the same with Laugh Floor at the Magic Kingdom. He buries his head in my lap. But we can't seem to get out of the park without his insisting on attending the show.

Still, he loves going to Disney World. Kilimanjaro Safaris are filled with wonder. The dinosaurs at T-Rex Cafe at Downtown Disney are a must. He can recite the score for Beauty and the Beast or The Great Movie Ride (what other child walks around saying, "the great James Cagney"?). Funnel cakes or any snack in the park is welcome. Simply coming on Disney property, he lights up when we pass the entrance signs.

And of course there is the horse-drawn trolley. He loves the horses.

A special Guest Assistance Pass, obtained at Guest Relations, is such a blessing with my youngest. Not that we use it on any big mountain ride like Splash Mountain or Space Mountain. I use it largely for Toy Story Mania and occasionally for the Jungle Cruise. For my son who doesn't quite get the Mr. Potato Head thing (to him it's another character like out in the park), he's comfortable bypassing that to get on Toy Story Mania (which he insists on riding but does not want to either wear the glasses or pull on the canon). My thanks to Guest Relations at Disney's Hollywood Studios, who provide me a pass that lasts two to three months and does so with warmth and respect. My experience at the other Guest Relations are not so impressive, and, frankly, City Hall at the Magic Kingdom makes me feel interrogated by the time they've handed me one. I understand the potential for abuse. Frankly, I will not ask nor utilize my son's pass for my other children or my older daughter with autism, because she is more capable of experiencing the park like other guests. But the way City Hall seems to handle me, I often walk away from there feeling shamed for having asked for one. Again, thanks Studios!

I'm grateful to the cast members for whatever effort they make to go the extra mile for my children. Most are a little befuddled that handing out a sticker or making a comment about their T-shirt doesn't elicit much response. I encourage them to say "please" and "thank you" but usually the mumbled expression doesn't connect with the genuine offer made by the cast member. I could tell the dancer at The Lion King show was confused when my son wanted to go out with the other children. Still, occasionally cast members do make a connection, and helping my children socially connect in the right way is really important to their development. I'm starting pin trading with my older daughter to help build those social connections. 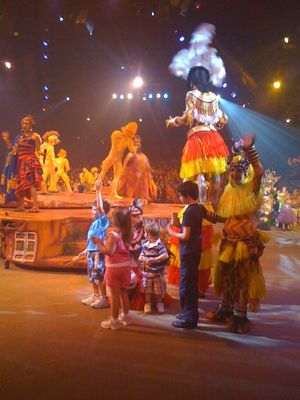 Though the tallest of the children there, my son wanted to participate in Festival of the Lion King. That's a major social step for him. Photo by J. Jeff Kober.

In summary, here are some tips for handling children with autism:

With my youngest children, I still feel lost in Neverland. But at Disney, none of that seems to matter too much. They seem at home, as if the parks were designed more for them than for me. Perhaps that's the way it should be. Looking through the looking-glass, perhaps I should see it as they do.

All the best, Jeff