NOTE: This piece first ran on April 1, 2010. April Fool's Day. Please do not get your hopes up and then send hate emails when you find out that it was an April Fool's joke. That's been done. Many times. Thank you.

MousePlanet has learned that the next round of Magic Kingdom makeover will not be centered on themes from its popular movies, but rather from a popular video game series and an alternate universe. A trusted source has passed along information that two new themes will be taking over the eastern side of the park once the Fantasyland Forest makeover approaches completion.

The Tomorrowland Speedway will become a Kingdom Hearts themed land. The Kingdom Hearts series of video games (link) is a joint venture between Disney and Japanese game company Square Enix. Disney CEO Bob Iger is trying to keep emphasizing Disney's efforts in the gaming space, especially those that involve core Disney characters, said the source. "With the effort invested in the Kingdom Hearts franchise, Bob sees a big opportunity to promote the series and bring a new take on the core characters to the mainstream, generating lots of merchandising dollars from the new theme."

In the new land, guests will be able to interact with Sora, Kairi and Riku from the popular series of video games, as well as the Kingdom Hearts versions of many Disney characters. The land will feature mini-adventures themed to various locations from the series. 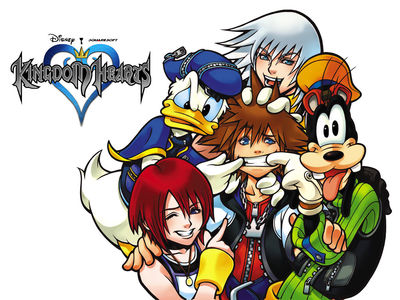 Kingdom Hearts characters Riku, Sora and Kairi (top to bottom) as well as the KH version of Donald and Goofy are headed for the Magic Kingdom. Image © Disney and Square Enix.

Entry to the land will be through a Destiny Islands themed area, where guests meet Sora and begin their adventure.

One attraction will feature computer-generated imagery, which will allow guests to choose which Disney-themed world they will visit. Choices are reported to include Agrabah, Halloween Town, Neverland and Atlantica, with guests having the ability to partner with Aladdin, Jack Skellington, Peter Pan and Ariel. Multiple theaters will allow for higher capacity. The computer generation of imagery will allow the locations to be changed out as desired.

A Disney Castle location will give guests the opportunity to see King Mickey and Queen Minnie at a meet-and-greet location, and they will be able to take on another adventure challenge with Sora.

Finally, a Gummi Ships attraction will provide shoot-em-up game play similar to that in Buzz Lightyear's Space Ranger Spin. With audio guidance from Riku and DiZ, guests will try to shoot minions of the Organization on their way to Castle Oblivion in order to save the world of Kingdom Hearts.

Retail locations include a shop where guests can purchase Kingdom Hearts paraphernalia, including their very own Keyblade. Of course, Kingdom Hearts-themed plush, Vinylmation, pins and more will also be available. Cosmic Ray's Starlight Cafe will also be rethemed, becoming a tavern in Traverse Town.

Said our source, "some of this is still pending, as elements may change following the release of upcoming installments of the Kingdom Hearts game. We're also looking at linking events in the land to gameplay on the DS platform." One possibility advanced is a new character, to be named Looflirpa, that would be exclusive to the parks.

The Speedway will shut down in 2012, once the majority of Fantasyland Forest is open, and work will take place simultaneously with the final phase of Fantasyland work to create the Pixie Hollow area. The new land should open in 2013.

Even more interesting is the retheming coming to the rest of Tomorrowland. Taking its cue from Disneyland Paris' Discoveryland, Tomorrowland will take on a "Steampunk" look. Steampunk (link), a subgenre of science/speculative fiction, has various flavors, though the angle taken in the Magic Kingdom will be the "what if current technological advances were created through Victorian-era means?" variety.

The concept is actually being pushed out now. A "Mechanical Kingdom" series of pins is being released (link) with a signing event taking place today at Downtown Disney (link). "The overwhelming positive reception to the new pin series has given Bob and Tom Staggs the confidence that this makeover of Tomorrowland will be a slam-dunk," said our source. 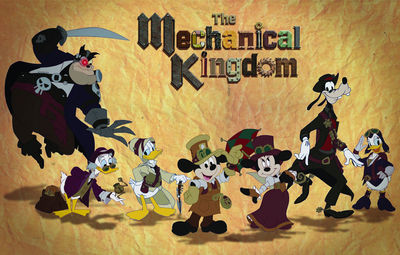 The new Mechanical Kingdom pin set is a first look at the type of theming coming to Tomorrowland. Image © Disney.

Space Mountain will get a new paint job and a decor overlay to give it a similar appearance to the matching attraction in Paris, though without the exterior launch tube. While the queue games will remain, the appearance of the station in the game will be made more retro. Ride vehicles will get a makeover and will more resemble the rockets on the Astro Orbiter. The Astro Orbiter itself may adopt the color scheme from Disneyland's version of the attraction. Similar decor will be rolled out throughout the land.

For the initial phase of the makeover, at least, no attraction changes are planned. Depending on how the retheming is embraced by guests, a Treasure Planet-themed attraction and one related to an unnamed future feature film may also be on tap for the future.

The exterior retheming is to start late this year and be completed by the spring of 2011, with the new Space Mountain ride vehicles coming on line late next year. Future phases, including the likelihood of new attractions, will be evaluated in late 2011 and early 2012.

By the way, in case you haven't picked up on it by now, this column is entirely fictional, and came entirely from my imagination. Happy April Fool's Day!