[Today's park update was written by our newest contributor, Julie China. She will periodically be filling in for Mark Goldhaber.]

Adrienne Vincent-Phoenix originally posted this in her blog, on March 23, with an update on March 27.

Eight people were injured in an accident this afternoon at Walt Disney World when a Disney Transportation bus struck a parked Mears bus near the Epcot parking lot entrance (see WFTV.com for aerial photos of the accident site).

According to the Florida Highway Patrol report, the Mears bus was parked  with its hazard lights on in the right thru-lane approaching the Epcot parking lot toll plaza at the time of the accident, with its driver of standing outside the bus. The report says that about 2:15 p.m., "for an unknown reason," the driver of a Disney bus travelling in the same lane failed to stop, colliding with the Mears bus.

The driver of the Disney bus, identified by Florida Highway Patrol as Jean Valentin, 42, of Orlando, was airlifted to Orlando Regional Medical Center. The Florida Highway Patrol report listed Valentin's injuries as "severe." A 60-year-old male and 59-year-old female from Columbus, Ohio were transported to Dr. Phillips Hospital in Orlando and treated for "minor" injuries, along with a 5-year-old male, also from Columbus, who according to the report was uninjured. Four other passengers from the Disney bus—a 46-year-old male from Cheektowaga, New York, a 24-year-old male from Rio Ranch, New Mexico, and two minors—were transported to Celebration Hospital with serious to minor injuries. There were no passengers on the Mears bus, and the Mears driver was not injured.

[Update: The Orlando Sentinel reports that the 5-year-old boy, originally said to be uninjured in the crash, was later found to have broken his pelvis in two places. The injury was discovered when the child complained of pain after returning home to Arizona.]

In a prepared statement, Walt Disney World spokesperson Bryan Malenius told MousePlanet, "Safety is a cornerstone of our company and currently; we are focused on the well-being of those involved in the situation, and cooperating with Florida Highway Patrol."

Malenius declined to provide additional details about the circumstances leading up to the accident, and directed any further questions to Florida Highway Patrol. It is still unknown how many passengers were on the Walt Disney World bus, only that seven passengers plus the driver were transported to local hospitals following the accident. The report does not indicate what route the Disney bus was driving, nor where it had come from.

Transcripts of the 911 call (posted on the My Fox Orlando Web site) indicate that the Mears bus was coming from the Waldorf Astoria Hilton Bonnet Creek, but there was no explanation for why the bus was parked outside of Epcot. A spokeperson for the hotel said that she believed the bus had experienced mechanical problems and pulled over for inspection, but referred additional questions to Mears.

Florida Highway Patrol says "The crash remains under investigation, and charges are pending."

Last Thursday, Ridemakerz opened for a limited engagement at Downtown Disney Westside at the former Virgin Megastore location. Designed for young boys (or "Customizers") to build their own customized Ridez cars, Ridemakerz offers a more testosterone-friendly alternative to custom plush stores like Build-A-Bear. Each Ridez model is is about a foot (12 inches) long, or or 1:18 scale. 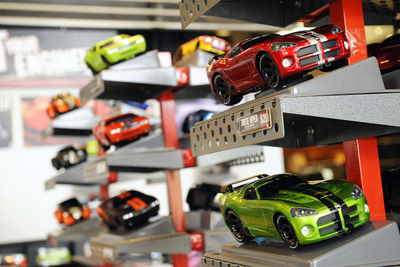 Shoppers get to pick a body shape, paint color, and decide if they want a low-rider or high-rise "chassiz" at the Chooze Zone. Choices include some of today's most popular cars, such as the Ford Mustang, F-250 Super Chief Alternative Fuel Concept Truck, Chevrolet Corvette C6.R and C6RS, Dodge Ram, Challenger, Viper, MINI Cooper S, and Scion xB. Customers then choose from a variety of music and sound effects at the Sonicize Zone before moving to the Motorize Zone, where they add Radio-Control (R/C), "wheelz" (rims) and "treadz" (tires). Finally, the Customize Zone allows shoppers to add accessories like "spoilerz," side "pipez," blown out "enginez," and "decalz" to personalize their car. Once all the parts are assembled, everything snaps together to form a complete vehicle. According to Ridemakerz, there are enough different body parts that there are more than 649 million possible build combinations. 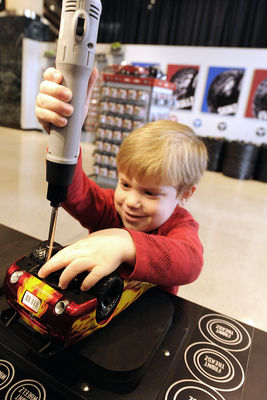 Guests at the Downtown Disney store can also view eight world-class show cars that are on display including, a Chevrolet C5.R racecar built by Pratt and Miller Engineering for General Motors, an F150 NASCAR Pace Truck and Dodge Ram from the personal collection of Chip Foose, and a MINI Cooper from the private collection of Fireball Tim Lawrence.

Tables in Wonderland, the discount dining program available to Annual Passholders and Florida residents is hosting two exclusive special events, one in April and one in May.

April's Discovery Dinner will be held at The Wave... of American Flavors at the Contemporary Resort on Thursday, April 15, with the reception starting at 6:30 p.m. and dinner at 7:00 p.m. The price is $92 per person, including tax and gratuity. Hors d'oeuvres will be paired with wine at the reception. Dinner features an appetizer, entree, and salad, all paired with wine, and dessert paired with port. April's dinner features seafood from Florida's coastal waters. The event is limited to 50 guests.

On May 6, South Africa's Avontuur Estate winery will host a dinner at Jiko – The Cooking Place. The price is $160 per person, including tax and gratuity. Check-in will be from 6:20 p.m. – 6:30 p.m. in the back of Disney's Animal Kingdom Lodge lobby on the left hand side. The reception starts at 6:30 p.m. with hors d'oeuvres in the Sunset Lounge, and dinner is at Jiko – The Cooking Place at 7:00 p.m. Dinner will include appetizers, soup, intermezzo, entree, cheese course, and dessert. The event is limited to 36 guests.

Dress for both events is casual evening attire.

To request a reservation for either event, send an e-mail to Tables in Wonderland (link) with your interest, name, daytime phone number, home address, and the number of people in your party. Reservations are first-come, first served. You will need to provide your credit card number over the phone at the time of confirmation.

Florida residents can win… and smell the flowers

Florida residents have until April 30 to enter the contests. Additionally, the Web site features information, photos, and video showcasing the Epcot International Flower & Garden Festival with its theme "Celebrating the Great Outdoors." For more information, Florida residents can call 407-W-DISNEY (407-734-7639) or check out the special Florida resident section on Disneyworld.com.

Be sure to also check out MousePlanet's Epcot International Flower & Garden Festival 2010 page in the Park Guide.

On April 25, Mark will once again be walking to raise money for the March of Dimes. The March of Dimes mission is to improve the health of babies by preventing birth defects, premature birth, and infant mortality. Over the last four years, largely through the generosity of MousePlanet readers, we have managed to raise over $15,000. This year, let's do something special. Mark's personal goal is to raise $5,000 this year. But you can help in ways other than donating to his walk. This year, for the first time, you can walk with him. Even if you aren't in the Albany, New York area, you can virtually walk with him by joining Team MousePlanet and walking at the March for Babies in your own area. For more information about why Mark is walking, or to donate to Mark's walk, please go to his fundraising page (link). To sign up to join Team MousePlanet, please go to the team page (link). Join Mark and help be a part of saving babies! Let's show how big a heart MousePlanet readers and MouseStation listeners have! 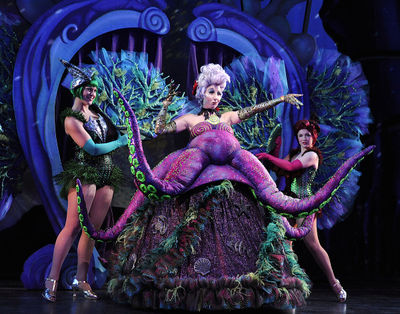 …After a successful two month rehabilitation at Disney's Animal Kingdom, a healthy 10-pound sea turtle was returned to its natural habitat near the Canaveral National Seashore this morning. The sea turtle is one of 14 critically injured sea turtles treated by Disney veterinarians and care experts since January due to the cold winter this year. All together, five sea turtles have been rehabilitated and released.

…Disney's Animal Kingdom has just received its new Association of Zoos and Aquariums accreditation. Congratulations to Animal Kingdom and its cast members

…Walt Disney World filed its response to the civil lawsuit brought by the mother of monorail pilot Austin Wuennenberg who was killed in a crash involving two monorails last July 5 at Magic Kingdom. Disney has not admitted any fault in the accident and has requested a jury trial.

Disney Rewards Visa cardholders can take advantage of an exclusive offer when they purchase a 4-night/5-day Magic Your Way Vacation that includes room, theme park tickets and the Quick Service Dining Plan for most nights between March 14 and August 14. When you purchase the package, kids (ages 3-9) will receive 5-day theme park tickets and the Quick-Service Dining Plan for free. This discount must be booked by April 24. Reservations may be made by using code OD3. Deposit must be made at the time of booking with your Disney Rewards Visa credit or debit card.

The number of rooms available at these rates are limited. To reserve a package, call the Walt Disney World Reservations phone line (407-939-7607) or contact a travel agent. MousePlanet's preferred Disney travel providers are MouseEarVacations.com (link) and Small World Vacations (link).

Active and retired U.S. Military personnel can save up to 40 percent on rooms at select Disney resorts for most nights through September 30. This discount must be booked by July 31. Reservations may be made by using code OUQ (room only), OUR (with Quick Service Dining Plan), OUS/OUT (with regular Dining Plan), or OUU (with Deluxe Dining Plan).

The number of rooms available at these rates are limited. To reserve a room with the Military discount, call the Walt Disney World Reservations phone line (407-939-7607) or contact a travel agent. MousePlanet's preferred Disney travel providers are MouseEarVacations.com (link) and Small World Vacations (link).