On today's show, Mark and Mike celebrate the 400th episode and honor their previous show by remembering their favorite Magical Moments. Also, a new "@ the Station" comic, poll results and listener feedback.

Mark and Mike celebrate the 400th episode and honor their previous show by remembering their favorite Magical Moments. Also, a new "@ the Station" comic, poll results and listener feedback.

Mike's first Magical Moment took place in February 2005 in Minneapolis, when he first met Mark (along with Jim Hill and Chuck Oberleitner) at a showing of Dream On, Silly Dreamer prior to the Walt Disney Company's annual shareholder meeting. As they say, it was the beginning of a beautiful friendship.

Through his early writings at MousePlanet, Mark was able to make the acquaintance of former Imagineer George McGinnis. Spending time with George at Disneyland, including a memorable lunch with George's son and Mark's wife and son, was a special treat.

Mike's next Magical Moment came with his two-week trip to Disneyland for a DECA conference at the time of Disneyland's 50th Anniversary. He was able to to attend the special press events for the celebration under the auspices of the conference.

Mark's second Magical Moment is the five MouseFest events that he attended, getting to meet and spend time with fellow Disney enthusiasts, including people who read his Walt Disney World Updates and listen to the show.

Mark's next-to-top Magical Moment was attending two of the pilot tests of the E-Ticket Experience with his wife in 1997, once by themselves and one with friends. They enjoyed themselves like little kids with the park to themselves.

Mike's top Magical Moment is actually a tie between being a cast member, where he got to be part of making the magic, and his Disney-themed wedding (which we've talked about on prior shows, with pictures posted on his Facebook page).

Mark's top Magical Moment involves The Kid, and was told on the first episode of the Magical Moment Podcast. In February 2003, while riding the monorail to the Magic Kingdom for the first time of the trip, The Kid was watching out the window and got so excited about catching sight of Cinderella Castle that his enthusiasm got the entire monorail car smiling. After entering the Magic Kingdom, while members of their party dispersed to take care of locker and scooter rentals, Mark and The Kid found Meeko in Town Square and The Kid played and danced alone with Meeko for almost five minutes.

Sean Jones has rebooted the "@ the Station" comic strip. We'll be featuring a new strip every couple of weeks or so. Here's the first installment. Enjoy! 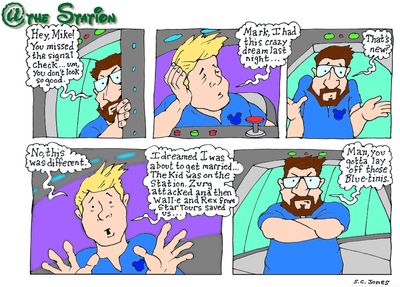 Is Bobby Ewing in the shower? Comic strip by S.C. Jones.

Mark finally posted the question on Twitter and Facebook last week, so we can finally move forward with it.

How old were you the first time you went to a Disney theme park?

Mike's first trip was at age 1, though his earliest memory is from years later when was being punished at Columbia Harbour House.

Dan the Light Man called in to talk about this year's movies that he can't wait to see and also how he's glad that he got to see Expedition Everest in the first year, before they stopped trying to fix the Yeti's motion, leaving it to run in "B" mode most days.

Mary Tesch wrote in to give her opinion of the Old Key West as a response to the recent featured review of that resort. As with Mark, she loves the resort and doesn't mind that most buildings don't have an elevator. She (and Mark) have never had a problem getting a first floor room when desired.

Dean from New York City called in to give his opinion of Phineas & Ferb (that he's never seen it), and wanted to raise a conflict related to why Donald Duck doesn't wear pants, but he wears trunks while swimming.

Val wrote in to comment on the retheming of rooms at the Caribbean Beach Resort with a pirate theme. She also asked Mark and Mike what they thought about retheming rooms.

Kim Barron called to update us on her spring travel plans and to explain why she was not traveling with her friend Hope on the trip. She also mentioned that she was now cancer free for almost four years, which prompted Mark to recall meeting Kim at MouseFest 2006.

Stuart Sternberg called in to say that he was sorry to hear that the show was being cut back to once a week, but he understood our reasons for doing so.

MousePlanet readers and MouseStation listeners have helped Mark to raise over $15,000 for the March of Dimes over the last four years to help save the lives of babies born prematurely. This year, his goal is to raise another $5,000. But that's not all! This year, you can walk with Mark, either in person or virtually, by joining Team MousePlanet! Mike has already signed on to walk as well. You can go to Mark's fundraising page to sponsor him, Mike's fundraising page to sponsor him, or the Team MousePlanet page to join in and walk yourself! Help us to provide a better chance to prevent prematurity and to help those babies that are born prematurely, because new parents should take their babies home from the hospital, not to the cemetery.

Due to time and availability issues, beginning next week, the MouseStation will broadcast once per week, on Thursdays, at least temporarily.