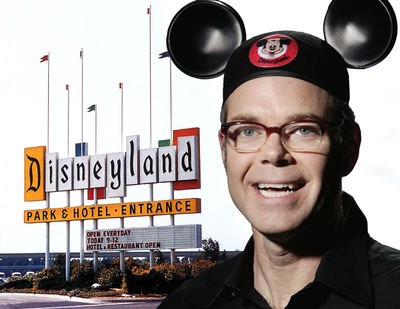 We couldn't think of a better way to commemorate the 10th Anniversary of MousePlanet and the 55th Anniversary of Disneyland than with Charles Phoenix’s Retro Disneyland Slide Show, a live comedy performance celebrating of the Magic Kingdom in the 1950s and 1960s…in color! Charles shows ands tells the back story of long-gone attractions including the Phantom Boats, Flying Saucers, Indian Village, Carousel of Progress, and other favorites. Also experience the early days of Main Street USA, Adventureland, Fantasyland and Frontierland. “Disneyphiles will enjoy seeing some classic images of the park gone by, including the original Tomorrowland when it was promoted as ‘The World of 1987.’ We’ll also check out the all-new Tomorrowland when it was launched in 1967,” says Phoenix who has spent years collecting and researching these vintage images and history of the park. “I’ll also share the flaming back story of the monorail; take you inside the ultra space-age, all plastic House of the Future; and fly you to the moon in the legendary TWA Rocket.”

This very special show will take place on Saturday, July 17 in honor of the 55th Anniversary of Disneyland. The show will be held at the Crown Plaza Anaheim Resort Hotel, the headquarters hotel for the NFFC–Disneyana Fan Club DisneyanaMania Convention. Tickets are just $25 per person, and seating is limited. Seating is first-come, first-serve; the ballroom will open at 9:30 a.m. and the 90-minute performance will begin at 10, leaving you plenty of time to spend the afternoon celebrating Disneyland's 55th Anniversary!

Pop culture humorist Charles Phoenix is known for offering a hip and highly original take on kitschy and the classic American experience with his hilarious Retro Slide Show performances, fun-filled School Bus Field Trip Tours, “Test Kitchen” experiments, and colorful coffee table books. Fans from coast to coast enjoy his infectious enthusiasm, gracious sense of humor and keen eye for detail. Charles is a recurring correspondent for NPR and guest on The Martha Stewart Show. The LA Weekly chose Charles for the cover of its 2008 People issue, calling him the "Kodachrome King." For more information about Charles, visit www.charlesphoenix.com or follow Charles on Facebook.