I’m not sure why, but I’ve never been a big postcard guy. Maybe it’s the thought of torturing my friends and loved ones at home with a “Ha, Ha, look where I am and you’re not!” message in the mail. That always seemed kind of wrong to me. I have purchased postcards while on vacation. I’ve even sent a few of them. Most of the time they end up collecting in my suitcase and being filed in the vacation memory box when I return home.

That said, since I started collecting lots of various things and perusing through flea markets and antique stores, the vintage postcard and travel photo market has drawn my attention. Maybe it’s seeing what things looked like way back when. Sometimes it’s a hoot to read the messages people wrote to each other, or to see where they were from and where they were traveling. It’s a unique window to the past. I’ve found a few really old postcards from my town and my parent’s summerhouse town and some great New York World’s Fair cards as well. I recently stumbled across a vintage postcard type of thing from Walt Disney World and it’s really become one of my favorite pieces of Disney stuff that I own.

It’s a set of 26 photos from early Walt Disney World. Judging from the photos, text, captions and some poking around in cyberspace, you could safely make the assumption that this is from Walt Disney World’s first year: 1971. There are places to write an address, affix a stamp and a “Greetings From…” space on the inside, so it’s intention was to be mailed home to a jealous friend.

The postcards are a very cool snapshot of a specific time period in the resort’s history, one that I was not fortunate enough to experience. Many of you out there have been venturing to Orlando since opening day in 1971. The rest of us rely on photos and stories. Something like this set of photos is an important resource for us to look back upon and see what our favorite place was like way back when. Let’s take a closer look.

Here's the cover of the photo book. I'm a big fan of the old Walt Disney World logo, the Mickey globe if you will. 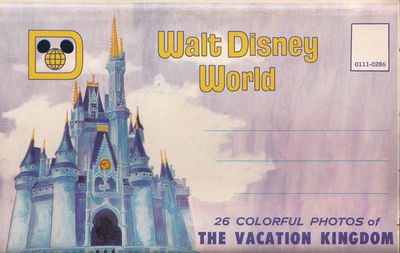 The cover of the photo album. © Walt Disney Productions.

The back cover is an aerial view of pretty much everything that was the resort back then. 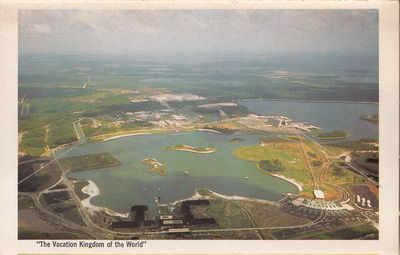 When you open the photo album, there is a "Greetings From" page. I love the description of the resort and how new it all is. 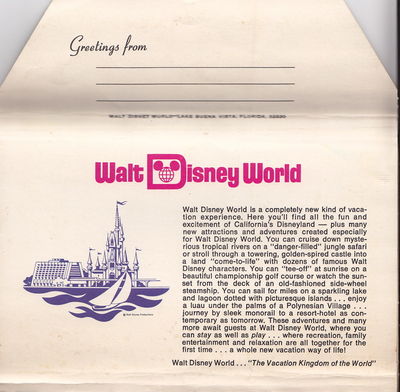 Imagine when it was all brand new. © Walt Disney productions.

Here's a look at just a handful of the 26 photos included in the album, ready to mail back to all the poor unfortunate souls who weren't able to make their way to Florida in the Fall of 1971. 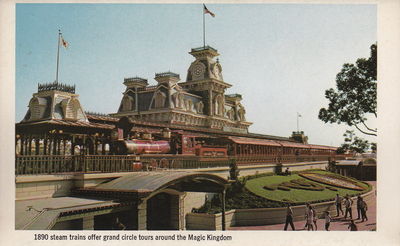 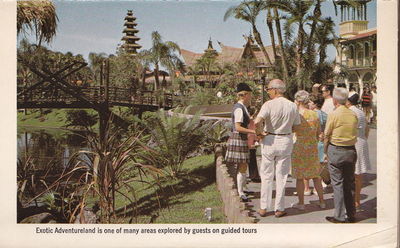 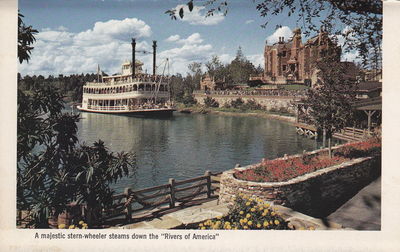 Can you spot the differences? © Walt Disney Productions. 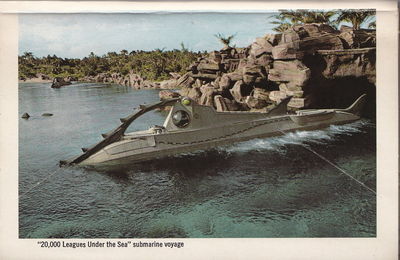 A ride I never got to experience. © Walt Disney Productions. 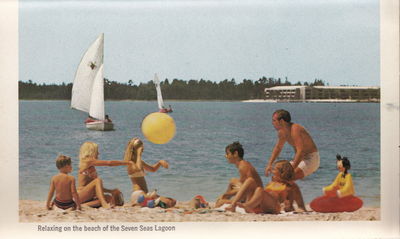 Just where is this beach? Hate to argue with the caption, but it looks like Bay Lake. © Walt Disney Productions. 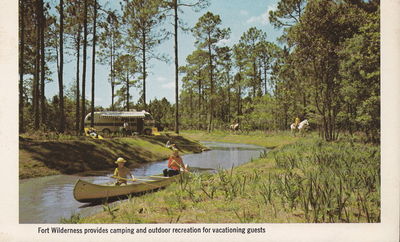 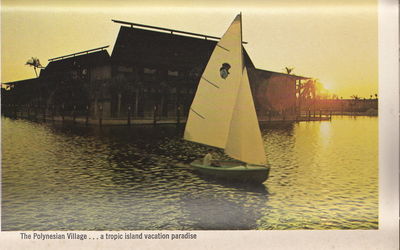 This set of photo/post cards was a really good find for me. I love checking out the history of Walt Disney World and this is an easy way to see what things were like in the early days. If you're interested in finding one for your collection, they're out there. I came across a few on the internet. Some were auctioning at only $5.00. Another was for sale for around $20.00. Yet another was in mint condition on a collector site for $70.00, so the market really does vary.

I wonder, considering my aversion to sending postcards, if I would have actually purchased something like this had i visited the resort back then. It isn't the kind of thing I buy now. Whenever we come back from a trip I do save the park maps and the Times Guides. They serve as a memory and a snapshot of our vacations just as much as our photos and videos do. Maybe this summer, when we'll be at Walt Disney World, I'll buy some postcards or the modern equivalent of this photo book and send it to a friend at home. Maybe I'll rub it in a little that I'm in the happiest place on earth and they're at home working. That's not really my style though, but I think I may buy some postcards or a photo book and keep it in the vacation memory box. Then I can look back on them years later and see what's changed. I'm sure I'll still be writing out there somewhere, so stay tuned for a future follow-up to this piece, maybe ten, twenty years from now.

Thanks for reading and I'll see you next time with some more of that great Disney Stuff.