Welcome to Part 2 of the MouseAdventure Spring 2010 Recap. As I said in Part 1, this event (split over two weekends with four divisions) was so large in scale that it demanded an equally impressive recap article. Part 1 included all the data teams wanted right away: scores, winners and descriptions of quests (and answers). In Part 2, you can enjoy pictures, video and other fun stuff from the events.

Photography has always been a big part of MouseAdventure. Even from the first events, teams always had their pictures taken and the winning teams usually had a second picture taken as they celebrated their victory. In the very early days, teams were presented with their photos on 3 1/2" floppy disks. Now, you can just download your picture or order a print from the online albums. We've also often had staff members taking candid in-action photos during the events, and this time I think we have the most candids ever. So many, in fact, that I was inspired to create a music video featuring some of the best photos from the event. MouseAdventure is all about numbers: counting things, doing math, and of course scoring points. In the "By the Numbers" section below, I've listed a few interesting numbers relating to the Spring 2010 event.

david perry put together this entertaining video which was shown (with commentary) at the Basic/Anniversary morning presentation and again (without commentary) as teams trickled in to the ballroom for the Sunday evening closing festivities.

The MouseAdventure RetroSpectacular. Video from Keynote presentation by david perry.

Every team had their team photo taken during sign-in at Aladdin's Oasis (Advanced/Decades) or the Paradise Pier Hotel Ballroom (everyone else). Click each album cover to open the album in a new browser tab. 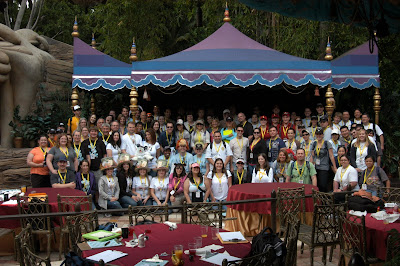 Members of the MouseAdventure roam through the parks during the events taking as many pictures as they can of teams working on quests. This usually results in very entertaining photo albums. You can also take a look at entries for the Team T-Shirt competition. Click each album cover to open the album in a new browser tab. Please feel free to add comments to the candids as you browse through them!

The MouseAdventure Spring 2010 Musical/Photo Retrospective. Video by Andrew Rich with the essential assistance of Stephanie Wien. Music: "Cliffs of Dover" by Eric Johnson from his album Ah Via Musicom.

Thanks again to the over 1,000 players, many of whom come back again and again, and all the MouseAdventure and MousePlanet staff members who put this thing on every time. We'll see you all again in October!